As Bernie Sanders Drops Presidential Bid, Most Supporters Ready to Back Biden

Sen. Bernie Sanders (I-Vt.) arrives at the Capitol for a March 18 vote. With Sanders now out of the Democratic presidential race, the focus turns to his supporters, and new polling shows that 7 percent of his backers say they'll vote for President Donald Trump against former Vice President Joe Biden. (Win McNamee/Getty Images)
By Eli Yokley

Sen. Bernie Sanders (I-Vt.) on Wednesday ended his campaign for president, becoming the last of more than two-dozen candidates to drop their bids for the Democratic nomination and leaving former Vice President Joe Biden as the party’s last man standing.

Speaking to supporters on a livestream, Sanders said he saw no feasible path to securing the nomination.

“I cannot in good conscience continue to mount a campaign that cannot win, and which would interfere with the important work required of all of us,” he said, highlighting the importance of beating President Donald Trump in November. 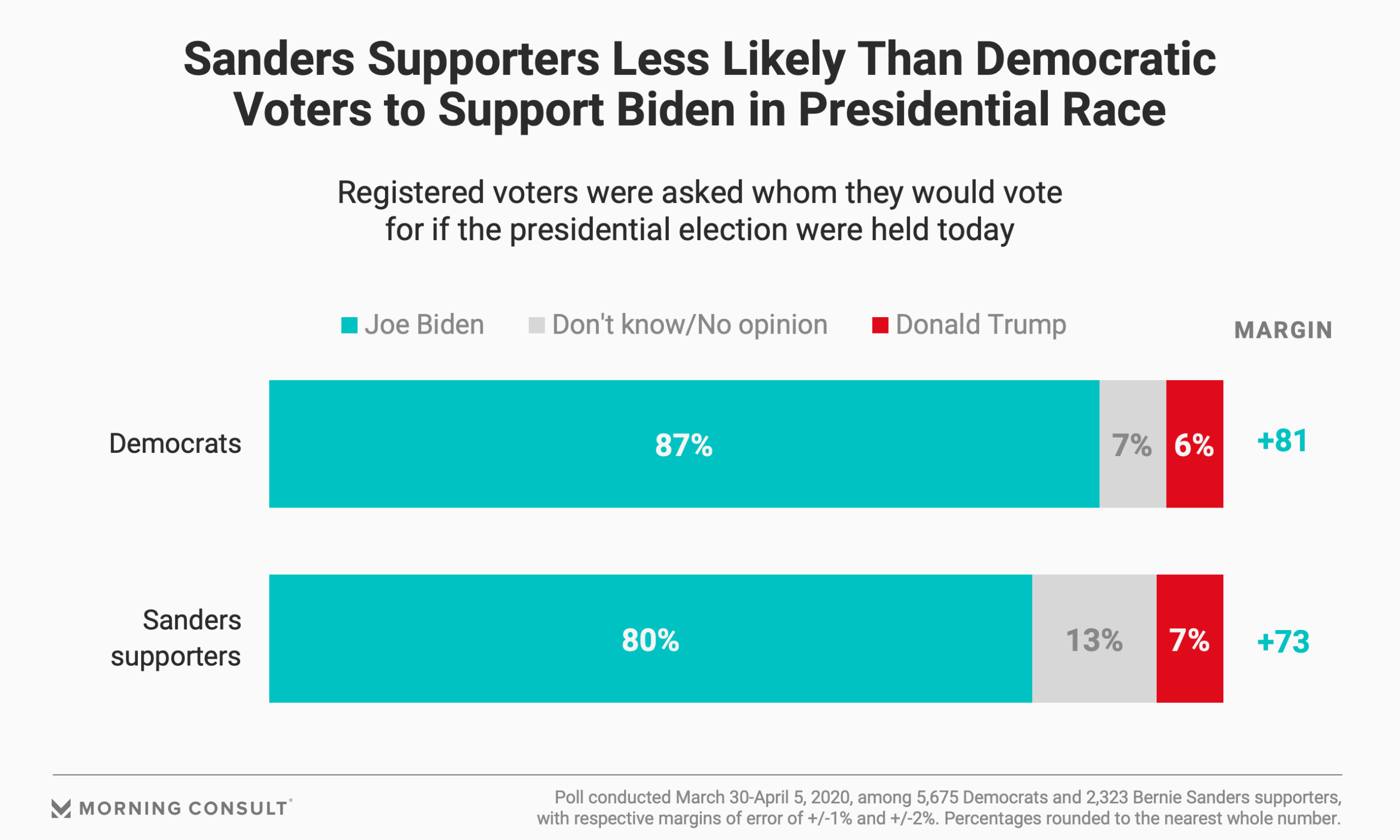 Most Sanders supporters are inclined to back Biden in November, but the former vice president will have some work to do to solidify those figures. The latest Morning Consult poll tracking the Democratic race, conducted March 30-April 5, found 80 percent of Democratic primary voters who said Sanders was their first-choice candidate would vote for Biden in a head-to-head matchup against Trump, while 7 percent said they would defect and back the incumbent Republican. The gap is bigger than among Democratic voters as a whole, but is less than the 12 percent of Sanders supporters estimated to have done so in 2016.

The poll surveyed 5,675 Democratic voters and 2,323 Sanders supporters, with respective margins of error of 1 and 2 percentage points.

In a Wednesday tweet, Trump said Sanders’ campaign “ended just like the Democrats & the DNC wanted” and urged “the Bernie people should come to the Republican Party.”

While Sanders’ supporters may have more apprehension about Biden than the average Democrat, there is no statistical difference between the two when it comes to their views about Trump. The latest poll found 13 percent of Sanders supporters and 12 percent of Democrats approve of the president’s job performance, while 86 percent and 85 percent, respectively disapprove.

In nationwide polling, Sanders only briefly led the race.

His increase in support came after Biden’s faltering in the early contests in Iowa and New Hampshire, tearing away at voters’ notions about Biden’s “electability” against Trump. After Iowa, Biden lost support among almost every group in the Democratic Party — liberals and conservatives, older voters and black voters, the core of Biden’s support. And after New Hampshire, Sanders briefly gained ground with black voters, whose confidence in the democratic socialist’s ability to win in November plummeted along with the overall Democratic primary electorate.

But that advantage was erased when Biden won the South Carolina primary and racked up victories on Super Tuesday, fueled by endorsements from three of his former rivals in the Democratic contest: former South Bend Mayor Pete Buttigieg of Indiana, Sen. Amy Klobuchar of Minnesota and former Rep. Beto O’Rourke of Texas.

Sanders supporters had hoped for an endorsement by Sen. Elizabeth Warren (D-Mass.), a liberal like himself who had endorsed similar policies and backed “big structural change.” But that never came, and her exit preceded an increase in Biden’s lead in national polling that would become insurmountable for Sanders.

Sanders’ exit from the race does not mean he is going away entirely. In his remarks on Wednesday, Sanders told supporters his name would remain on the ballot in the coming contest so he could accrue delegates to exert influence on the party platform.