Analysts see potential for greater demand for these movies, and polling shows fans are eager to stream them 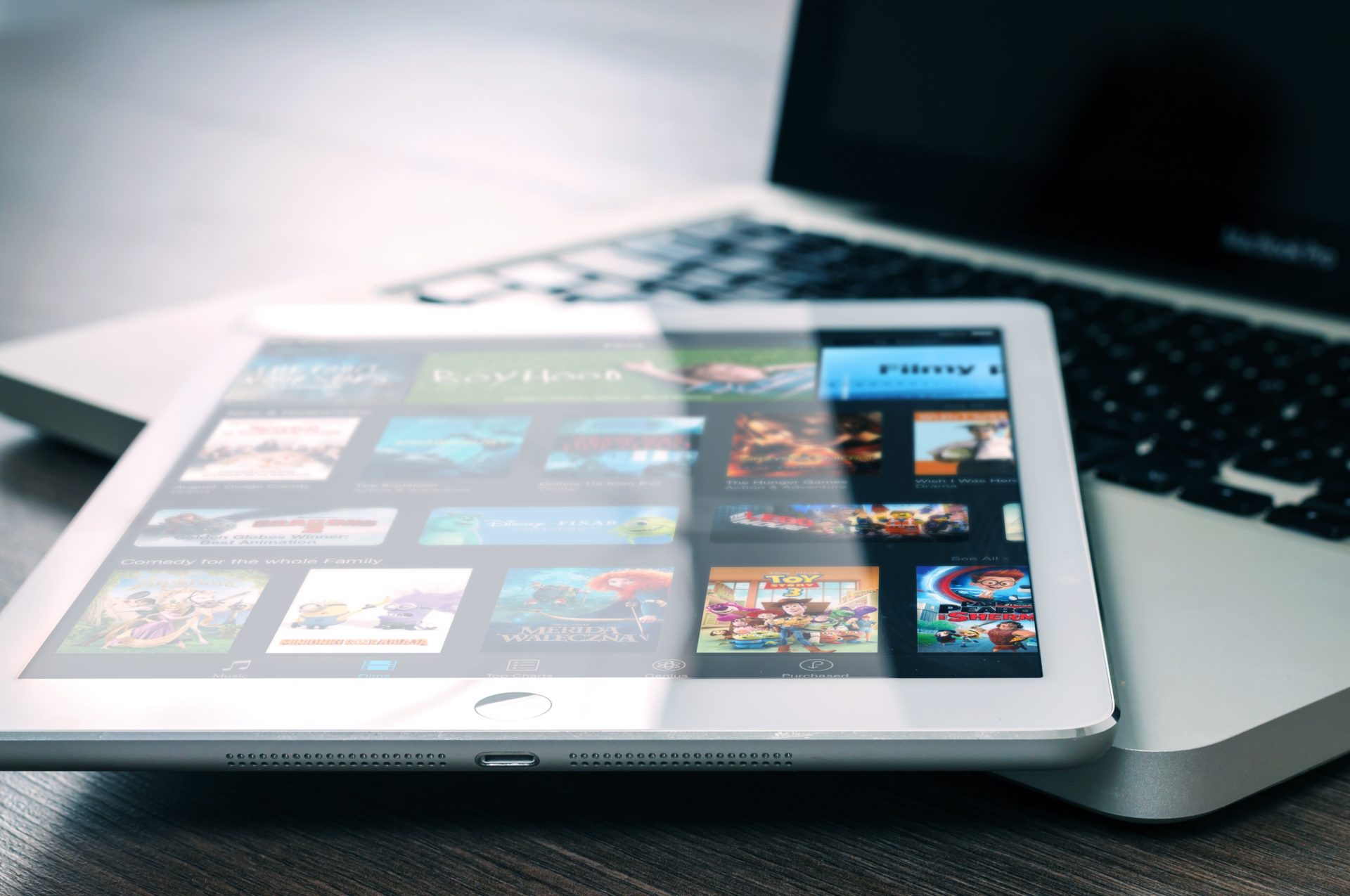 20% of U.S. adults said they were more likely to watch an independent film on a free, ad-supported streaming service amid the coronavirus pandemic. (Pixabay / Pexels)
By Sarah Shevenock

As consumers sit at home clicking through Netflix Inc. and other streaming services looking for a new movie or TV show to watch, these companies are likely thinking about how they will retain subscribers when they no longer have buzzy, new originals to offer, especially as productions have come to a complete halt.

Independent filmmakers who were set to premiere their films at SXSW may have the answer: finished films that are ready to be acquired by a distributor. Making a deal during a pandemic, however, has its downsides, according to these filmmakers.

With much of the public ordered to stay inside and movie theaters indefinitely closing their doors, polling shows an appetite for viewing independent features on streaming services: A March 27-29 Morning Consult/The Hollywood Reporter survey of 2,200 U.S. adults found that 39 percent of independent film fans — or respondents who see independent films in movie theaters often or sometimes — said they would be more likely to watch those types of films on free, ad-supported streaming services due to social distancing practices. 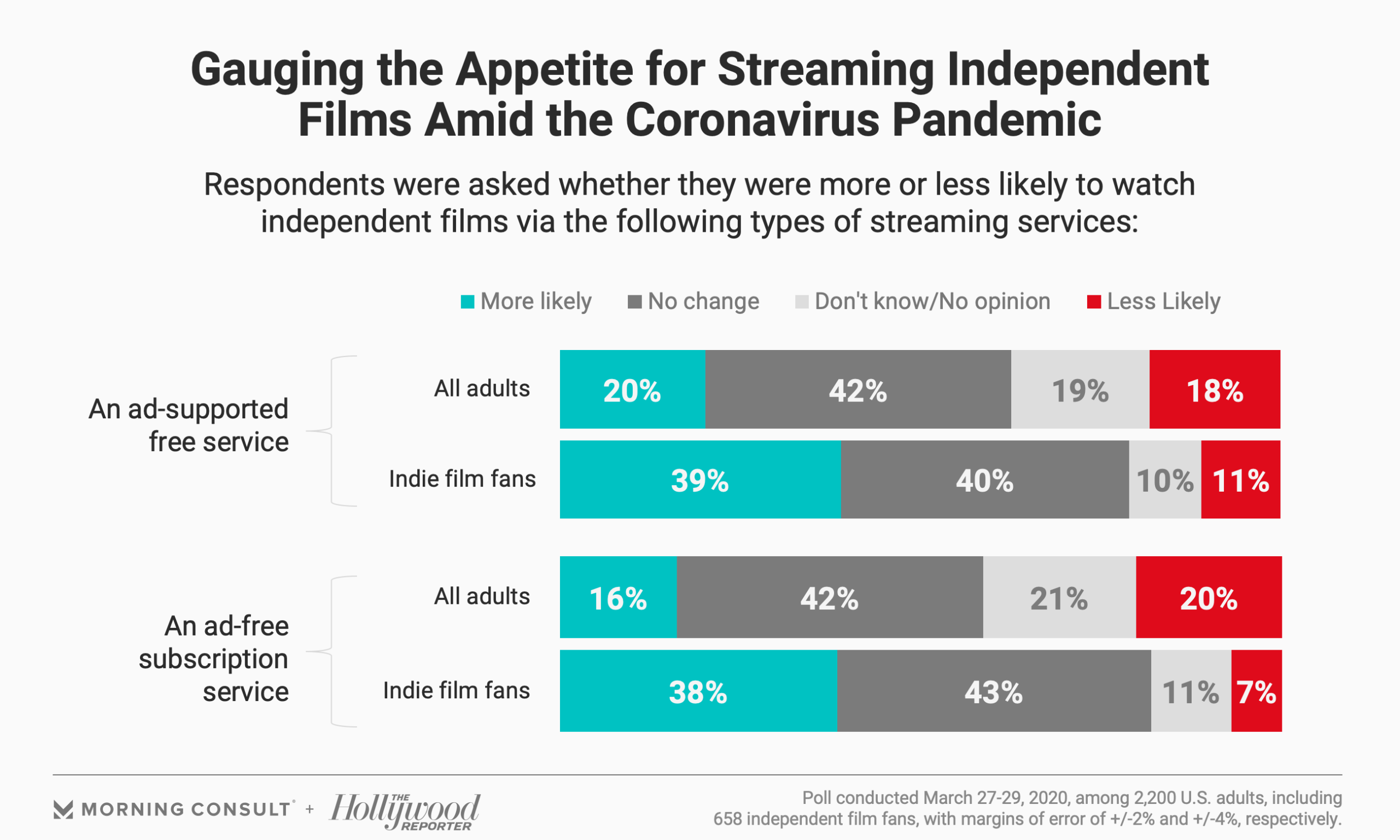 A 41 percent plurality of indie fans said they’d pay less than $5 to rent an indie film on a streaming platform. The survey has an overall margin of error of 2 percentage points, while the sample of 658 independent film fans has a margin of error of 4 points.

The public is watching more entertainment: Nielsen reported that during the week of March 16, U.S. consumers watched more than 156 billion minutes of streaming content, up from 71.3 billion roughly a year earlier, and this was before social distancing guidelines were widely observed in the United States.

More than a third (34 percent) of adults in the Morning Consult poll said they’d subscribed to a new streaming service since the beginning of the year, and 38 percent of that sample cited the coronavirus as a reason.

Analysts and executives say that an increasing demand for content and a continued production standstill could result in streaming services looking for completed independent films to add to their rosters.

And with production for most films and television shows halted due to the coronavirus pandemic, Sappington said competition for new content will increase.

“There’s going to be less and less available content to acquire, which drives up the price and perhaps forces you to go consider options you may not have considered before,” he said.

Ross Fremer, chief operating officer for Cinetic Media, a film and media company that provides advisory services, said that this could be a likely scenario, though it will take some planning to find the right content  and undergo the technological and marketing steps necessary to ready that content for a streaming service.

He also noted that a move from a major player could motivate other players to follow suit. “Netflix has been the standard-bearer for a long time in terms of how it dictates the tempo of markets,” he said. “I think a lot of it is really waiting for Netflix to make a move.” (Netflix did not respond to a request for comment.)

But it’s Amazon Prime Video that has made the first move. While it will not distribute the films, it announced on April 2 that it has partnered with SXSW to screen films that had been scheduled to play at the March 13-22 festival. Filmmakers who choose to participate in the 10-day virtual festival, whose start date has yet to be determined, will receive a screening fee and will see their film stream in front of the Amazon Prime Video paywall, which allows consumers to watch with a free Amazon account.

While Amazon’s intervention gives an audience to the films that would have been screened in Austin last month, several filmmakers said seeking distribution remotely comes with its disadvantages.

For one, the virtual festival can’t replace the professional benefits the filmmakers interviewed were looking forward to experiencing in person at SXSW, such as the opportunity to meet with interested buyers and audience members, network and find new collaborators. For many, it was also the first time they would see their film play before an audience, which can play an important role in the sale of films.

“Buyers are too scared to make up their own mind, but then they start seeing other people loving some film or the audience loving some film and then they want to jump on,” said Iram Parveen Bilal, the director, writer and producer of the drama “I’ll Meet You There,” which was set to have its world premiere at SXSW. “Those opportunities are all gone.”

And while Jiayan “Jenny” Shi, the director, producer and cinematographer of the documentary “Finding Yingying,” is open to a streaming release and acknowledged that it could bring a wider audience to her film, she pointed out that a theatrical release is essential to qualify for some industry awards. The Hollywood Foreign Press Association has made an exception for 2021 Golden Globes eligibility, but it’s not yet clear if other voting bodies will make similar accommodations.

Since the cancellation of SXSW, Katrine Philp — the director of “An Elephant in the Room,” which won the documentary feature competition — said the sales agent for her film has been sending links to streaming services and other distributors, providing them with the opportunity to screen the film outside of the festival. Other filmmakers interviewed for this article are going through a similar process.

When it comes to the virtual festival, Shi, Philp and Bilal all said that while they appreciated that SXSW was making a virtual festival an option and praised the festival’s commitment to the films, they had declined to participate. In follow-up emails, Bilal said she and her team are exploring some sale options, while Philp said her sales agents are presently “working on finding a home for the film.” All the filmmakers interviewed for this article declined to disclose financial details of any potential deals or how much SXSW and Amazon were offering.

When reached for comment, Prime Video pointed to its press release announcing the festival, while the SXSW Film Festival did not respond to a request for comment.

Even before Amazon and SXSW announced the virtual festival, John Pollono — who wrote, directed and acted in the film “Small Engine Repair” — said that screening for streaming services, without a live audience present, was not something he was interested in.

“We’re not in a rush to sell it,” he said. “We want to find the right buyers, and we want to have the right experience with it.”

The film’s team is waiting to see when the film can be screened for potential buyers when they can “see it with an audience and see how it plays,” he said. He later confirmed that his film will not be participating in the virtual festival.

Regardless of whether a film lands with a streamer, the industry-wide disruption caused by the COVID-19 pandemic could work to the benefit of independent filmmakers, according to Fremer.

“When given enough time, filmmakers and independent creators and thinkers will find really novel ways of coming through the bureaucracy and red tape of established media ecosystems or economic structures,” he said.