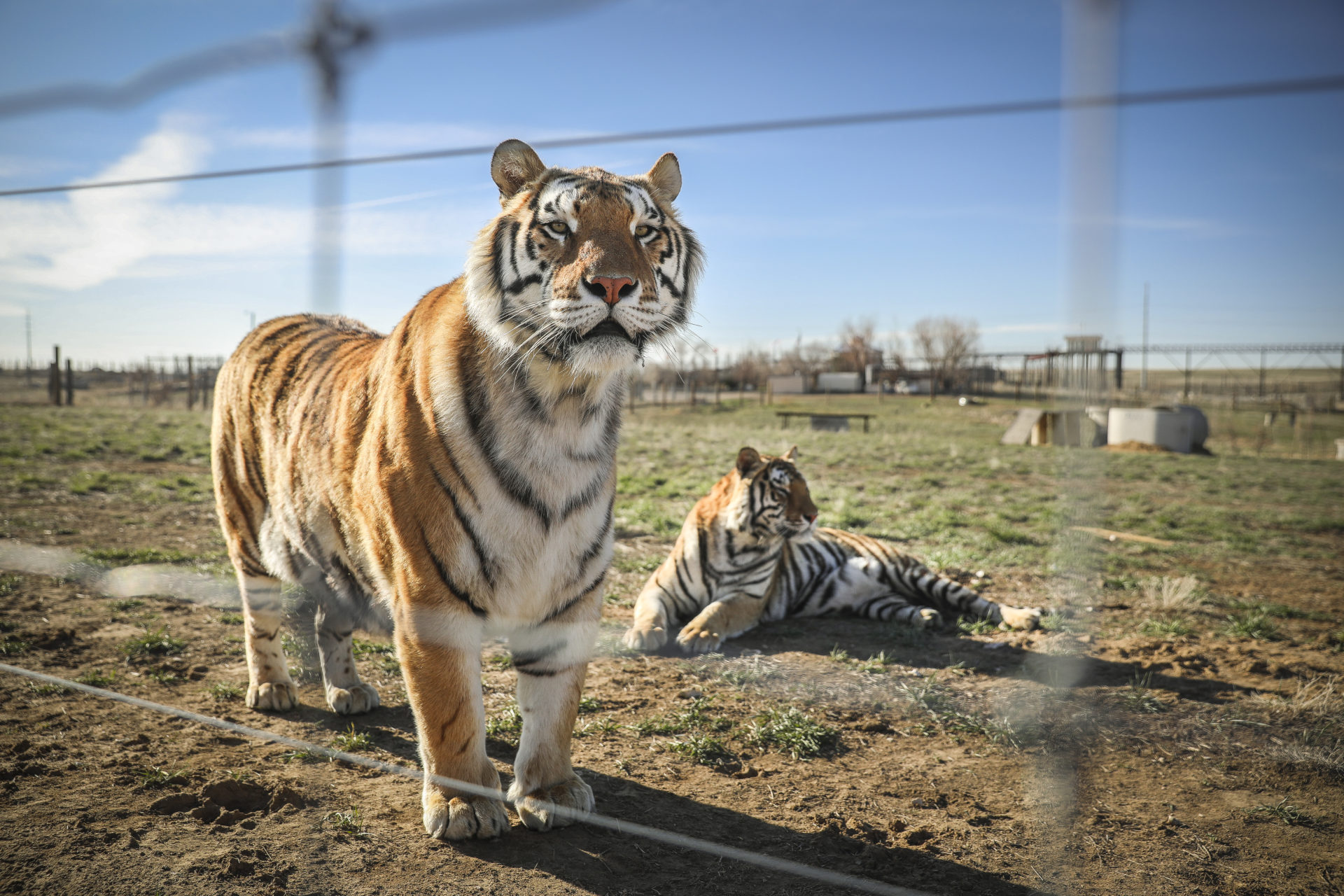 A pair of the 39 tigers rescued in 2017 from Joe Exotic's G.W. Exotic Animal Park relax at the Wild Animal Sanctuary on April 5 in Keenesburg, Colo. Forty-seven percent of viewers of the documentary series "Tiger King" have a favorable opinion of Exotic. (Marc Piscotty/Getty Images)
By Sarah Shevenock

As more Americans turn to streaming services to occupy their time at home, Netflix Inc. has found its latest hit in “Tiger King,” a true crime documentary series about big cat breeding in the United States. New polling finds that while the bulk of viewers have seen, read or heard mostly negative things about both exotic cat-breeder Joe Exotic and his adversary, animal rights activist Carole Baskin, they are more likely to have a favorable view of Exotic and his associates.

An April 2-4 Morning Consult/The Hollywood Reporter survey of 2,200 U.S. adults found that 41 percent had seen, read, or heard “a lot” or “some” about the Netflix original, while more than a fifth (22 percent) said they’ve watched some or all of the series.

LightShed’s Rich Greenfield, who has been tracking the series’ popularity on Netflix, reported on April 5 that it had been the top title for 14 straight days, and as of April 8, Netflix still lists the show as No. 1. The series had 34.3 million unique viewers from March 20-29, according to Nielsen data. 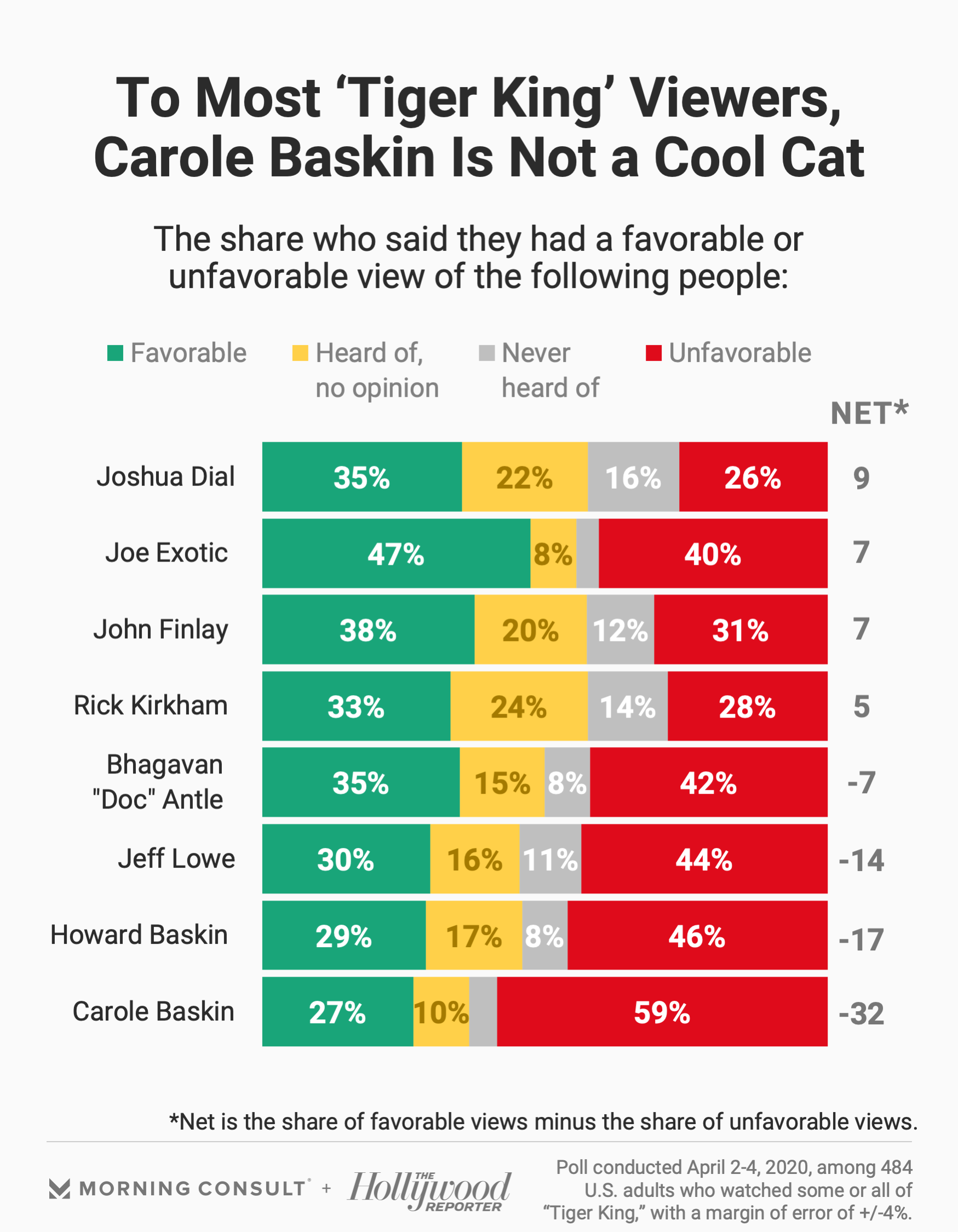 Exotic is currently serving a 22-year prison sentence after being convicted of two counts of murder for hire, eight counts of falsifying wildlife records and nine counts of violating the Endangered Species Act. He has filed a lawsuit and is currently seeking a pardon from President Donald Trump, according to a post on his Facebook page.

Nearly 60 percent of “Tiger King” viewers had seen negative coverage of Baskin, the chief executive officer of Big Cat Rescue, whom Exotic targeted in a murder-for-hire plot, and her favorability rating is 20 percentage points lower than Exotic’s at 27 percent.

Despite Baskin’s low favorability, most of those surveyed support legislation pushed by the “Big Cat Rescue” founder: Sixty-nine percent, including 72 percent of “Tiger King” viewers, said they would back a move by the federal government to ban the private possession of big cats such as tigers and lions.

Related: People Are Most Likely to Be Streaming Netflix During the Pandemic

The poll also shows that streaming is on the rise amid the coronavirus pandemic: Fifty-five percent of subscribers said they have watched more movies and TV shows on streaming platforms since health experts recommended social distancing measures last month. And of the 36 percent of adults who said they’ve subscribed to a streaming service since the beginning of the year, 43 percent cited the pandemic as a major or minor reason.

According to The Hollywood Reporter, more projects like “Tiger King” could be on the way as producers and documentarians seek to create projects from existing footage and one-on-one interviews during the pandemic-induced industry shutdown. However, one more episode of “Tiger King” may be coming first: Jeff Lowe, one of Exotic’s former business partners, said on April 4 via a Twitter video that he is filming a new episode of the show, set to premiere on Netflix this week, but Netflix has yet to confirm the news.

Related: Consumers Nearly Twice as Likely to Spend More on Streaming Due to Coronavirus
Documentaries Film and TV Streaming