Michigan Gov. Gretchen Whitmer (D) looks on during a General Motors event in on Jan. 27. The first-term governor is said to be on the short list to join former Vice President Joe Biden on the Democratic presidential ticket, but polling indicates that the presumptive nominee should pick a more liberal running mate if he wants to placate the party's younger voters. (Bill Pugliano/Getty Images)
By Eli Yokley

If presumptive Democratic presidential nominee Joe Biden is hoping to use his choice of a running mate to appeal to the young Democrats who largely backed Sen. Bernie Sanders’ bid for the White House, he’d do well to choose someone to his ideological left, a new Morning Consult/Politico poll found.

Democrats under the age of 45 were more than twice as likely (27 percent) to say it is “very important” that Biden pick someone more liberal than him compared to older ones (12 percent). Views among older Democrats were more closely aligned with those of the broader electorate (11 percent) and groups considered key to the outcome in November, such as women (11 percent) and suburbanites (11 percent), according to the April 10-12 poll of 1,990 registered voters, which had a margin of error of 2 percentage points. 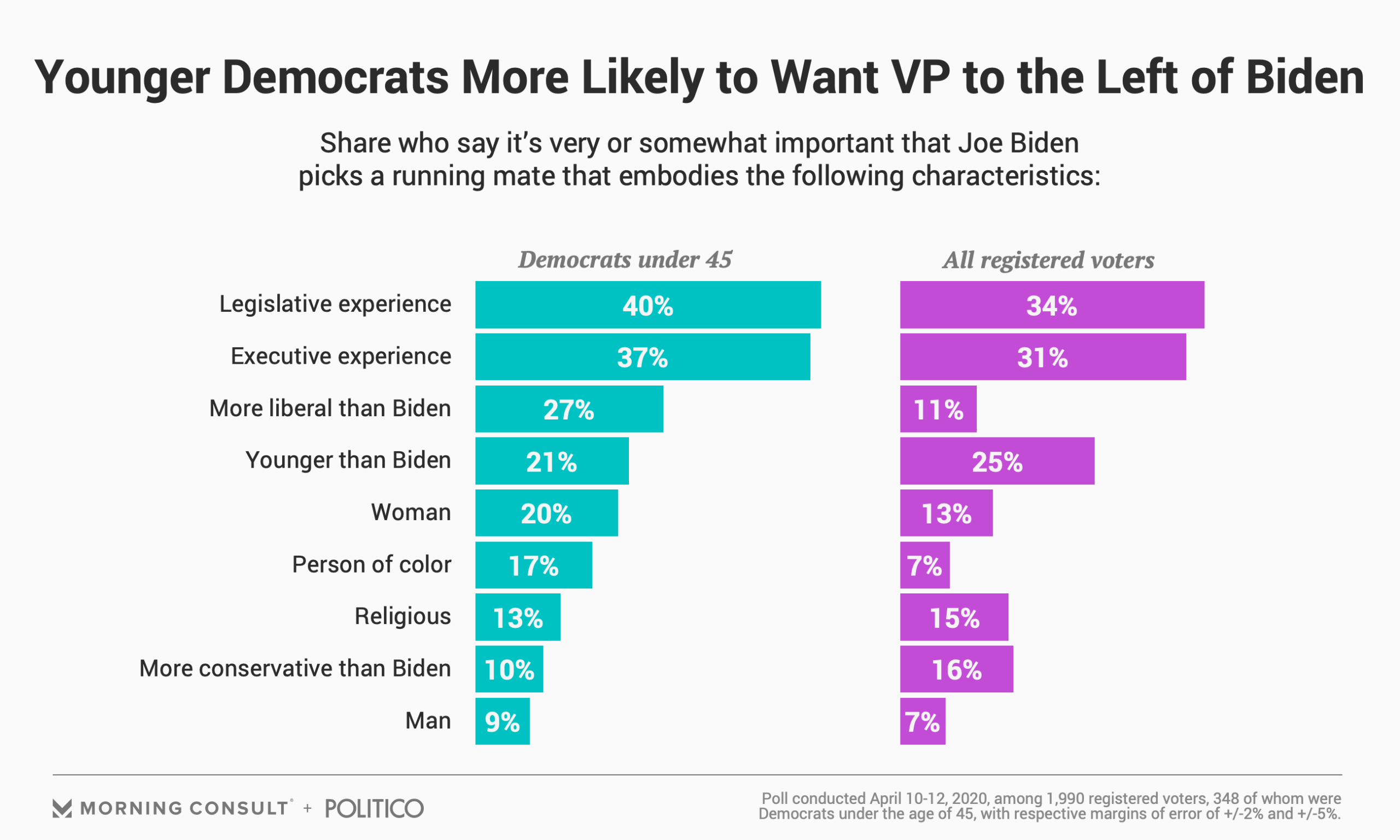 Biden has committed to choosing a female running mate, but has otherwise made no promises regarding his vice presidential pick. A quarter of Democratic voters said picking a woman was “very important,” compared with 13 percent of voters overall, who were more likely to prioritize someone younger and more conservative than the former vice president.

Black voters, who fueled Biden’s primary election victories and whom Democrats rely on in general elections, stood out in the poll for prioritizing a running mate who is religious: Twenty-four percent said that was “very important,” matching the share of 2016 Trump voters who said the same but 9 points higher than the share of voters overall with that response.

On either side of the aisle, and with independents in the middle, voters were most likely to prioritize legislative experience and executive experience — traits held by most of the women Biden is thought to be considering to join his ticket, including the seven tested in the survey. 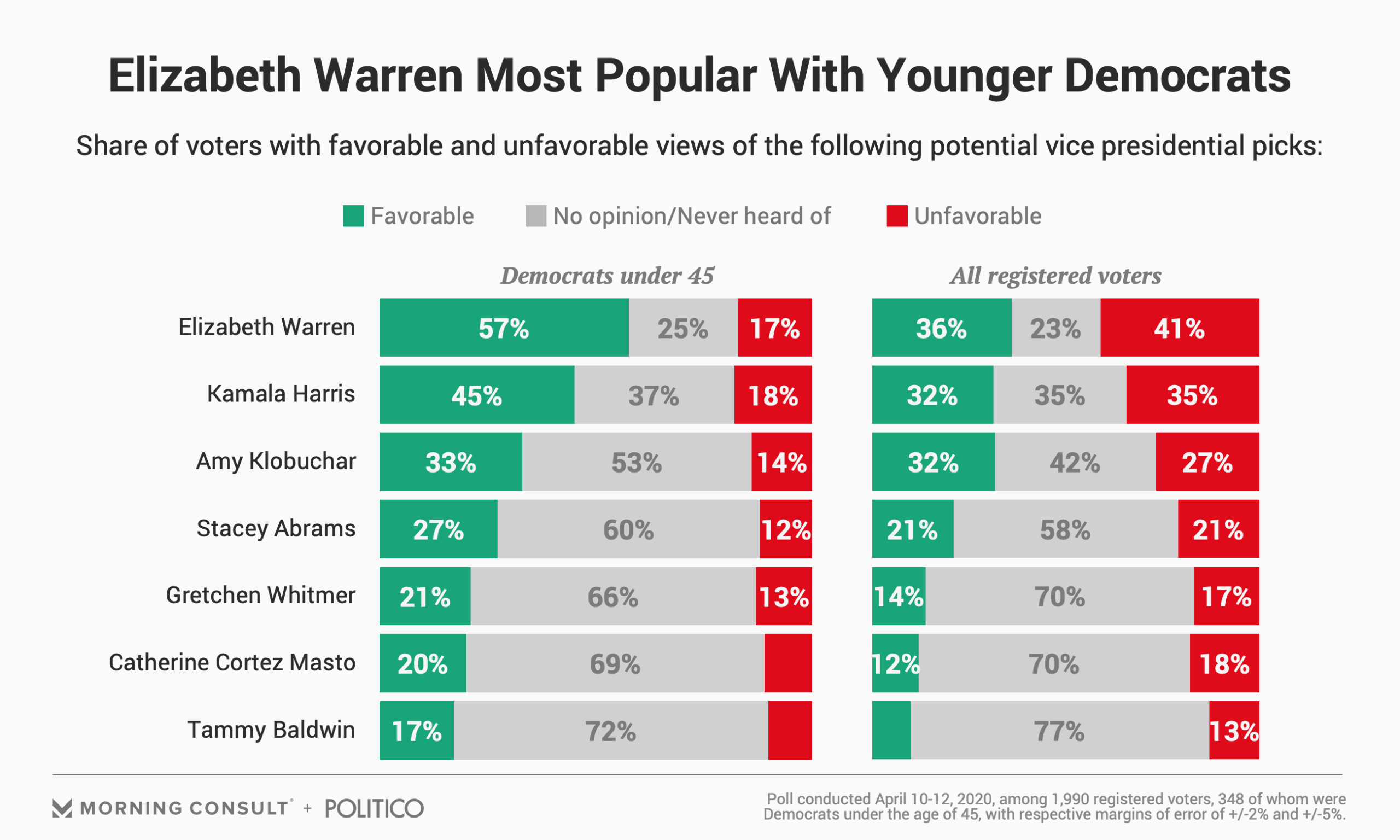 Presidential nominees do not always pick from reported short lists, but they can serve as a reliable guide. As Biden considers his options, the poll suggests two competing paths he could take to appeal to different voters: choose a person who is palatable with the general electorate and key constituencies in November, or one who could help him shore up enthusiasm in the Democratic Party and the young party voters who are wary of him.

On one of those paths lies Sen. Amy Klobuchar (D-Minn.), who had the highest net favorability (the share with favorable views minus the share of those with unfavorable views) of any candidate with the overall electorate, independents, suburbanites and women. She was the only potential pick whom all voters were more likely to view favorably than unfavorably.

On the other path is Sen. Elizabeth Warren (D-Mass.), the most popular candidate among Democratic voters, especially those under the age of 45. But she has a negative net favorability with the overall electorate, as well as independents and suburban voters. Women were roughly divided over her.

Other candidates would offer a blank slate. More than half of voters said they haven’t heard of Sen. Catherine Cortez Masto (D-Nev.) — who is reportedly among Biden’s top three choices — or Michigan Gov. Gretchen Whitmer, who recently became a target for Trump amid her 2020 battleground state’s response to the coronavirus. Biden recently hosted Whitmer on his new podcast.