Rep. Justin Amash speaks with voters during a town hall in May 2019. The former Republican says he's mulling a run for president, and a new poll measures his national support at 1 percent. (Bill Pugliano/Getty Images)
By Eli Yokley

Rep. Justin Amash (I-Mich.) said this week he’s looking “closely” at a run for president, raising the prospect that he could pull votes from the two major contenders with a third-party bid.

But a new Morning Consult poll found voters aren’t inclined to flock to the ex-Republican’s candidacy — at least not yet. According to the April 14-16 survey, 1 percent of voters said they would vote for him if the election were held today, while former Vice President Joe Biden leads President Donald Trump, 46 percent to 42 percent, in the hypothetical contest. 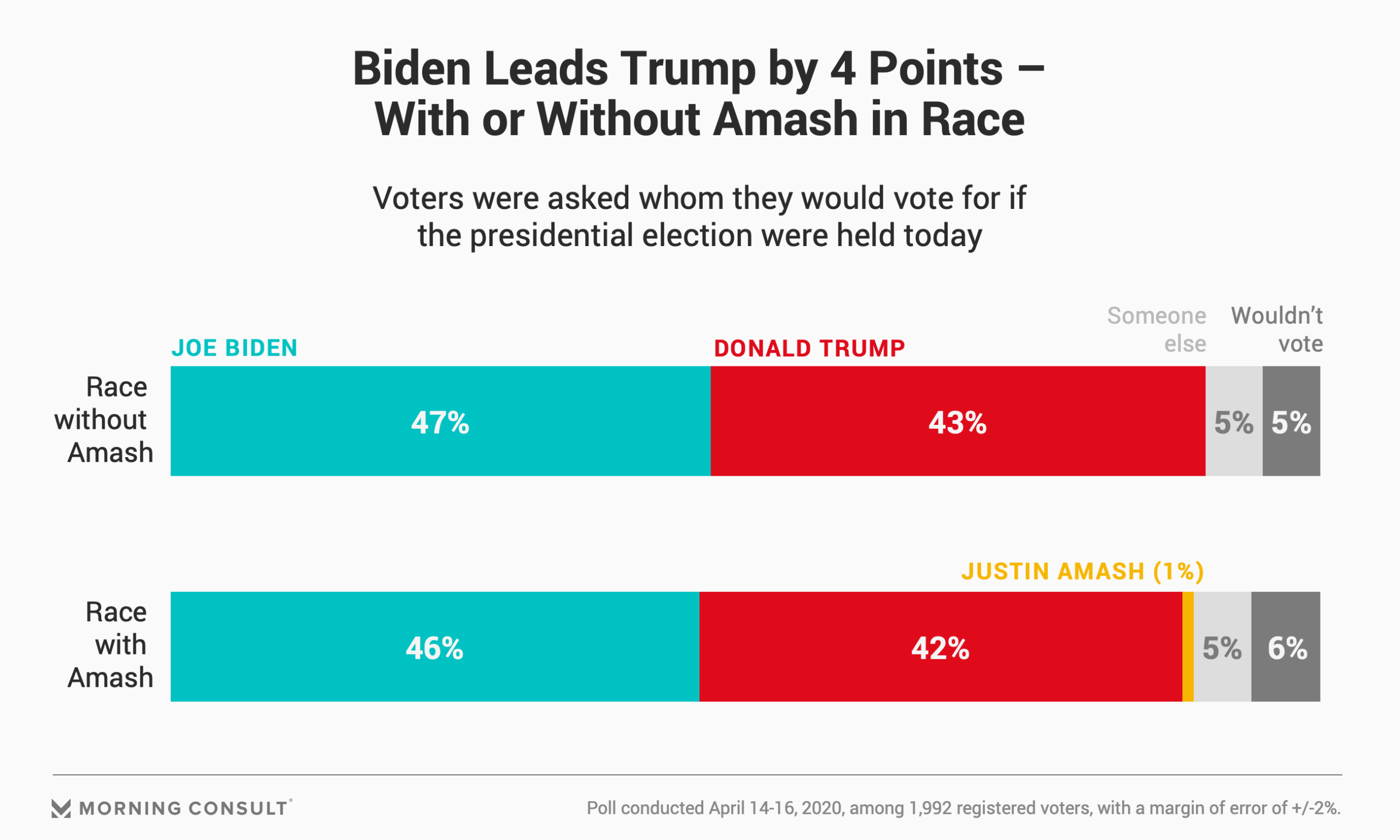 Biden led Trump by 4 percentage points among voters regardless of whether Amash was included in the poll. That same dynamic was true with all of the demographic groups tested in the poll, including independents and Americans who did not vote for a Democrat or Republican in 2016 or 2018.

Roughly 5 percent of voters said they would cast a ballot for someone else or wouldn’t vote.

Historically, third-party candidates have seldom been able to earn electoral victories, or even garner enough support to make it on the presidential debate stage. But they have made an impact on the outcome of elections — most recently in Amash’s home state in 2016.

Trump scored a surprise victory over Hillary Clinton in Michigan by just .223 percent, or roughly 10,000 votes, while the Libertarian Party and Green Party candidates together earned nearly 5 percent (more than 223,000 votes, driven mostly by the Libertarians). In four other states that year, Libertarian nominee and former New Mexico Gov. Gary Johnson drew a larger share of the vote than Clinton’s margin of victory over Trump, while the inverse was true in six states. (Johnson, who launched his campaign in January 2016, polled at 10 percent among registered voters in a May 2016 Morning Consult survey.)

Amash, a founding member of the hard-line House Freedom Caucus who left the Republican Party last summer, is a vocal critic of Trump and voted with Democrats to impeach him in December. If Amash were to run, he would likely need the backing of a third party, such as the Libertarian Party, which already has ballot access in 35 states.

“It isn’t too late to get into the race. Up until the convention, technically anyone could get in,” said Dan Fishman, executive director of the Libertarian Party. Asked how open Libertarian voters would be to having a former Republican congressman at the top of their ticket, he said, “We’ve done it before.”

An aide to Amash did not respond to a request for comment.

Jacob Hornberger, an attorney and Libertarian author, is a leading contender for the Libertarian presidential nomination, though former California judge and 2012 Libertarian Party Vice Presidential nominee Jim Gray launched his own bid on Monday after Lincoln Chafee — who served as a governor and senator for Rhode Island and ran for president as a Democrat in 2016 —  dropped his bid last week.