A protestor wears a face mask and gloves as Uber and Lyft drivers with Rideshare Drivers United and the Transport Workers Union of America conduct a “caravan protest” outside the California Labor Commissioner’s office amid the coronavirus pandemic on April 16, 2020, in Los Angeles. According to a new Morning Consult poll, 56 percent of U.S. adults support labor unions. (Mario Tama/Getty Images)
By Claire Williams

As Americans lose their jobs in record numbers and low-wage employees are asked to put their lives on the line to stock grocery store shelves, treat patients in hospitals and staff warehouses, worker protests and labor movements are increasingly popping up across the country.

New Morning Consult polling suggests that most adults are sympathetic to the cause. 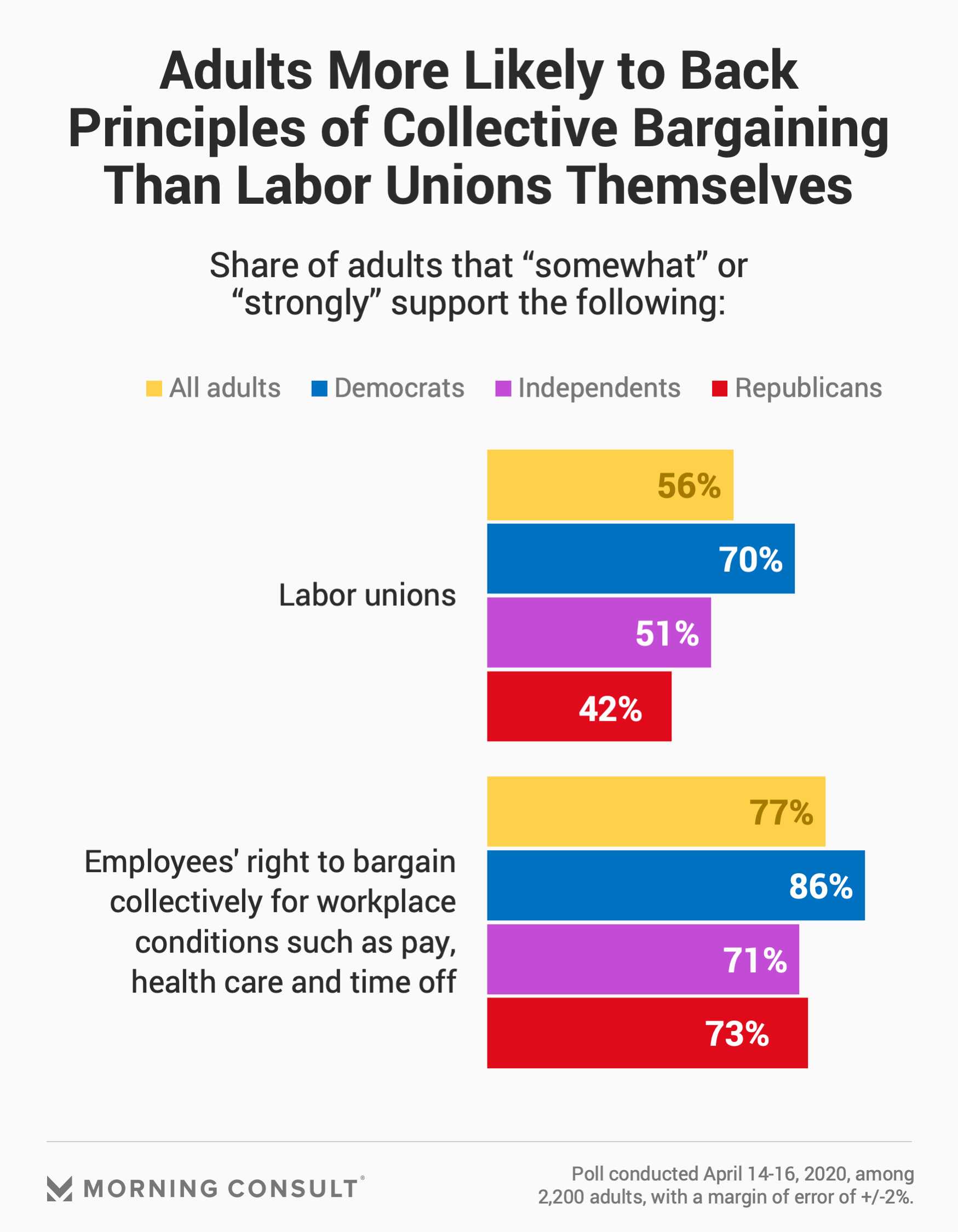 Those numbers shot up when adults were asked a similar question that excluded the term “labor union.” Seventy-seven percent of all adults say they somewhat or strongly support “employees’ right to bargain collectively for workplace conditions such as pay, health care and time off.”

The rise in support reflects strong majorities in both parties: Eighty-six percent of Democrats and 73 percent of Republicans said they back employees’ right to bargain collectively.

The survey results come as 22 million people filed jobless claims in the last four weeks, according to recent figures from the Labor Department, roughly equal to the number of jobs created in the stretch since the last recession. At the same time, frontline workers, especially those who work at Amazon.com Inc. warehouses and in grocery stores, are becoming increasingly outspoken.

Historically, support for labor unions is at a relative high, said Steven Greenhouse, a former labor journalist for The New York Times who has written books on the subject.

But while support for unions is high, it’s still unclear whether that will translate to a sustained surge in labor activity. The impact of the coronavirus pandemic could be twofold, Greenhouse said.

“A ton of workers are very upset that their employers aren’t doing enough to protect them, and that’s creating increased sympathy for unions,” he said. “At the same time, workers often feel more precarious, their lives are uncertain and those at work might fear that if you speak out and fight for a union, maybe they’ll get in trouble.”

On top of that, collective action might be more difficult to accomplish in the coronavirus era, simply because of logistics.

While some workers are organizing online, “it’s hard to protest when you have to stay six feet apart,” Greenhouse said.

Related: Half of Low-Income Adults Would Use Up Savings Within 3 Months Without a Job
Employment Unions