More than 35 years after it debuted in theaters, “The Karate Kid” is still “the best around” — if you can find it streaming, that is.

A new Morning Consult poll of U.S. adults found that 69 percent of U.S. adults have a favorable opinion of the 1984 film starring Ralph Macchio as the titular martial artist, the highest mark of the 40 sports flicks included in the survey. It also garnered the highest net favorability mark at 64 percentage points, which is determined by subtracting the share of respondents with an unfavorable view of the movie from the favorable share. 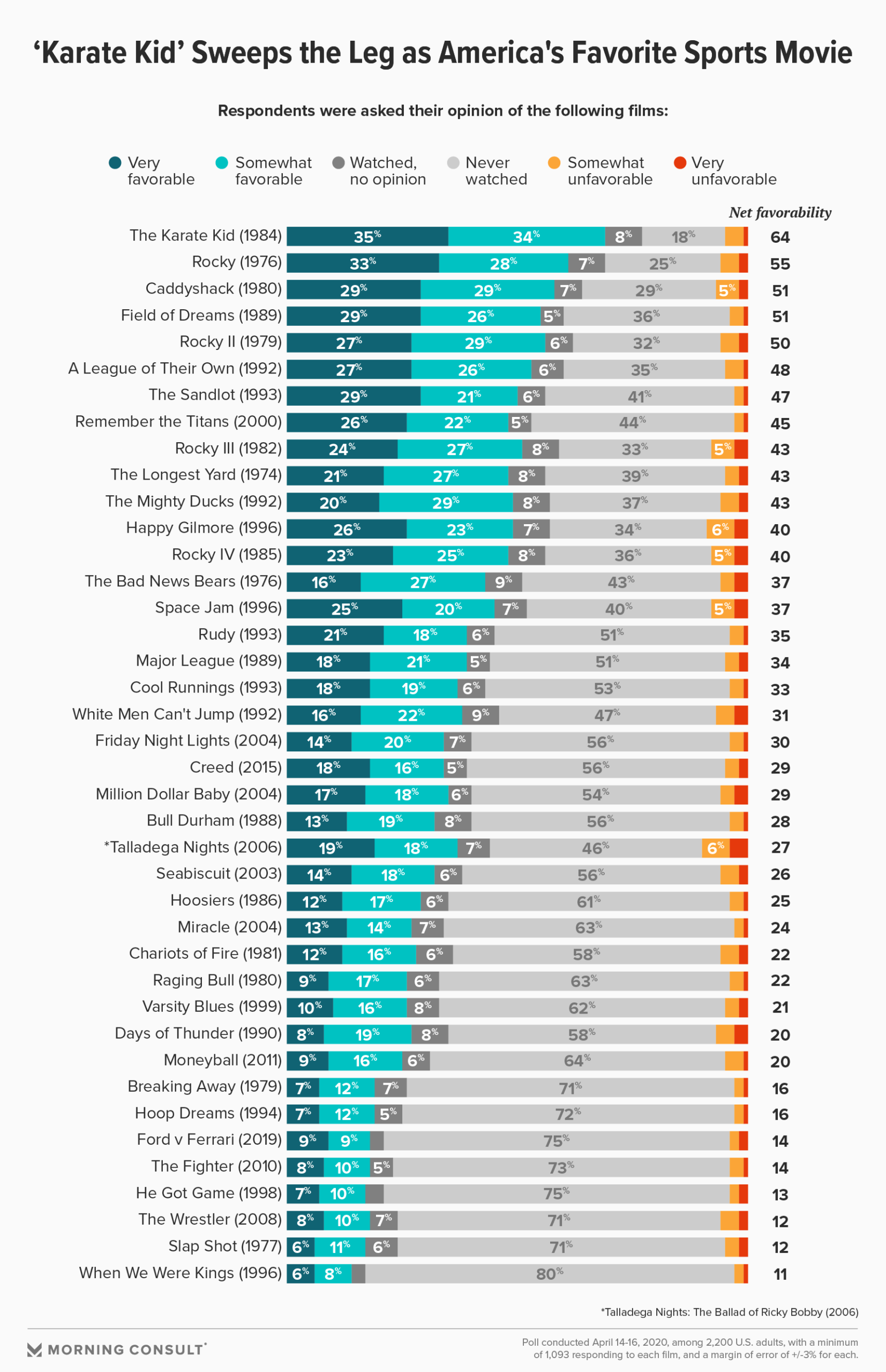 Despite its generation-spanning appeal  — respondents in all five age ranges, from 18-29 to 65 and older, had it in their top three selections — “The Karate Kid” is absent from the most popular streaming platforms. FuboTV, primarily a live TV product catering to sports fans, is the only service that currently includes the film available on demand for subscribers. It is available for paid rental and purchase from a variety of different outfits, however, including YouTube and Amazon.com Inc.’s Prime Video.

“The Karate Kid” was one of three combat sports films to crack the top five among U.S. adults, with the first two films in the “Rocky” series placing second and fifth, respectively. The first of Sylvester Stallone’s eight features as boxer Rocky Balboa, which took home the Academy Award for Best Picture in 1977, received a thumbs-up from 61 percent of adults surveyed and earned a net favorability of 55 points. Fifty-six percent of respondents logged a positive opinion about the 1979 sequel, “Rocky II,” which scored 50 points in net favorability.

Many of the highest-ranking titles in the April 14-16 survey, including the “Rocky” films and No. 3 “Caddyshack,” are absent from the most popular subscription streaming services as sports fans seek alternatives to live sports amid the coronavirus pandemic. Of the top 10, only one (No. 10: “The Longest Yard”) is available on Netflix, with one on Disney+ (No. 9: “Remember The Titans”) and two on Hulu (No. 4: “Field of Dreams” and No. 7: “The Sandlot”). 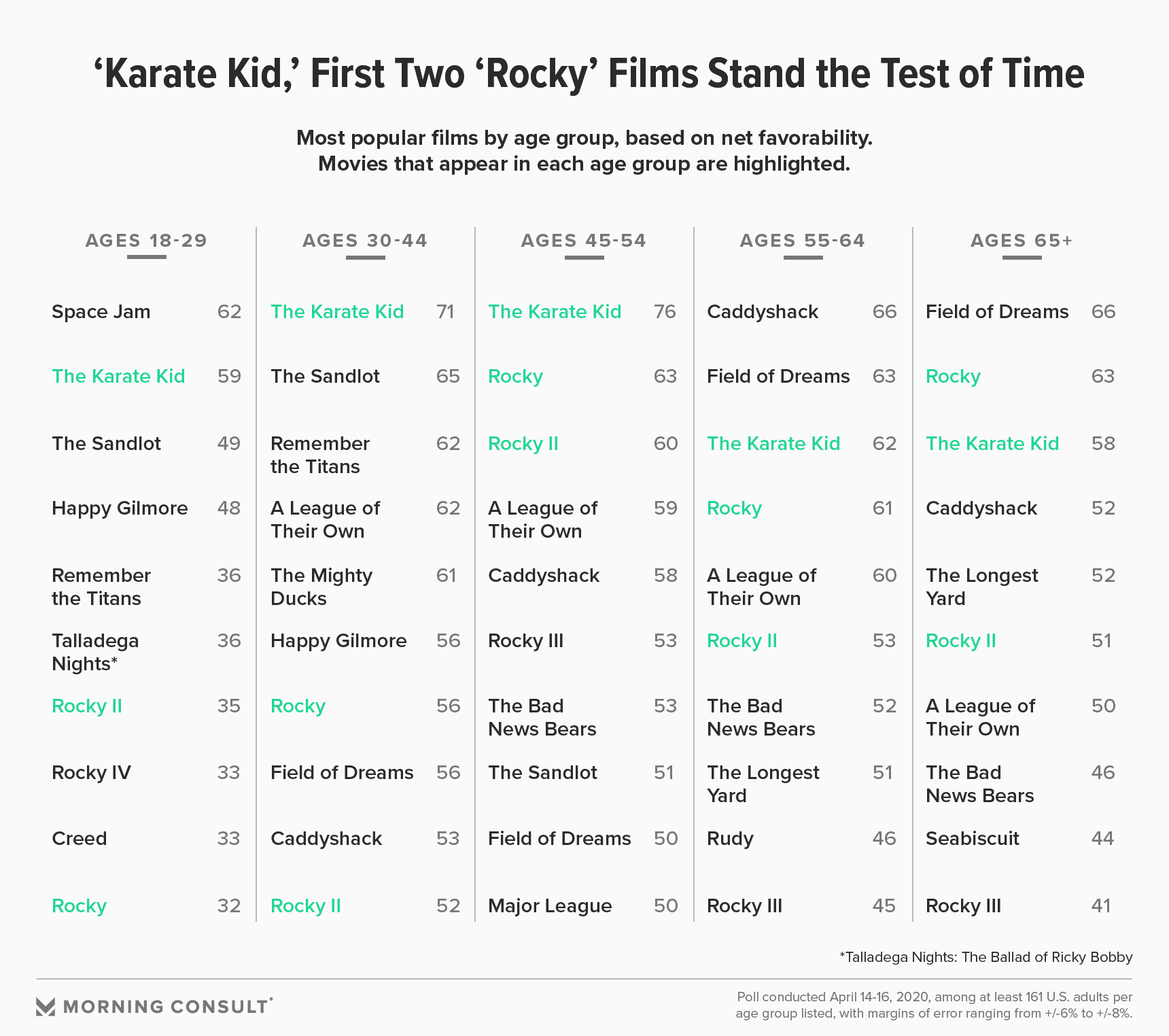 The survey, which polled 2,200 U.S. adults, with at least 1,093 weighing in on each of the 40 films, which were selected by a panel of Morning Consult reporters and editors. Responses have a 3-point margin of error.

Many of the films at the top of the overall list scored well with respondents of all ages, but the preferences of different generations were also apparent. Eighteen- to 29-year-olds picked “Space Jam,” the only live-action and animated film in the field, as their favorite with a net favorability of 62 points. None of the other age brackets had the Michael Jordan-led picture in their top 10.

Related: ESPN’s ‘The Ocho’ Is Back, but Is Axe Throwing a Sport? We Asked.
Film and TV Streaming