After a series of high-profile social media influencers shared misinformation about the coronavirus on their accounts, experts say higher levels of regulatory scrutiny could follow. (Getty Images)
By Sam Sabin

When the influencer-endorsed Fyre Festival ended up well short of its promise to provide attendees with a luxury VIP music festival in the Bahamas, consumer protection advocates were hopeful the event’s high-profile failure would put influencer marketing disclosures on the Federal Trade Commission’s radar and prompt tougher enforcement actions.

But three years later, advocates and industry experts argue the FTC has fallen short on its duties, with its action mostly taking the form of warning letters to celebrities who are suspected of not disclosing that their Instagram posts were sponsored by a brand.

Now, in the face of the coronavirus pandemic, stakeholders are hopeful that consumer uproar over a handful of social media influencers sharing misinformation about COVID-19 could spur the FTC into action — especially as the agency undergoes a scheduled review this year of its rules regarding how social media influencers disclose brand sponsorships in posts.

“Everyone knows the stakes are higher,” said James Nord, founder and chief executive of New York-based influencer marketing agency Fohr Inc. “I think something like an election in some ways is life and death for some people, but this is very much life and death.”

Last month, “Bachelor” alumna Krystal Nielson suggested in a since-deleted Instagram video that her followers sign up for her two-week detox program as a way of preventing infection from the coronavirus — despite there being no cure for COVID-19 currently. And shortly after lifestyle influencer Arielle Charnas shared with her roughly 1 million followers that she had tested positive for the coronavirus, she documented herself traveling in the same vehicle with her family, seemingly rebuking advice from public health officials, although Charnas has since said her travels happened after following quarantine guidelines given by her doctors.

And it’s posts like Nielson’s and Charnas’ that are starting to catch the eye of regulators. During a Politico event Tuesday, Republican FTC Commissioner Noah Phillips said he doesn’t anticipate that the growing number of online scams and false information cropping up related to COVID-19 will “dramatically shift” the agency’s guidance for disclosing brand endorsements, but he indicated that the agency is watching this space closely for violations.

“It’s bad enough that people spend money on something that doesn’t work,” Phillips said. “It’s even worse when they forgo care that they need or have confidence that they shouldn’t have with respect to whether or not they’re contagious.” 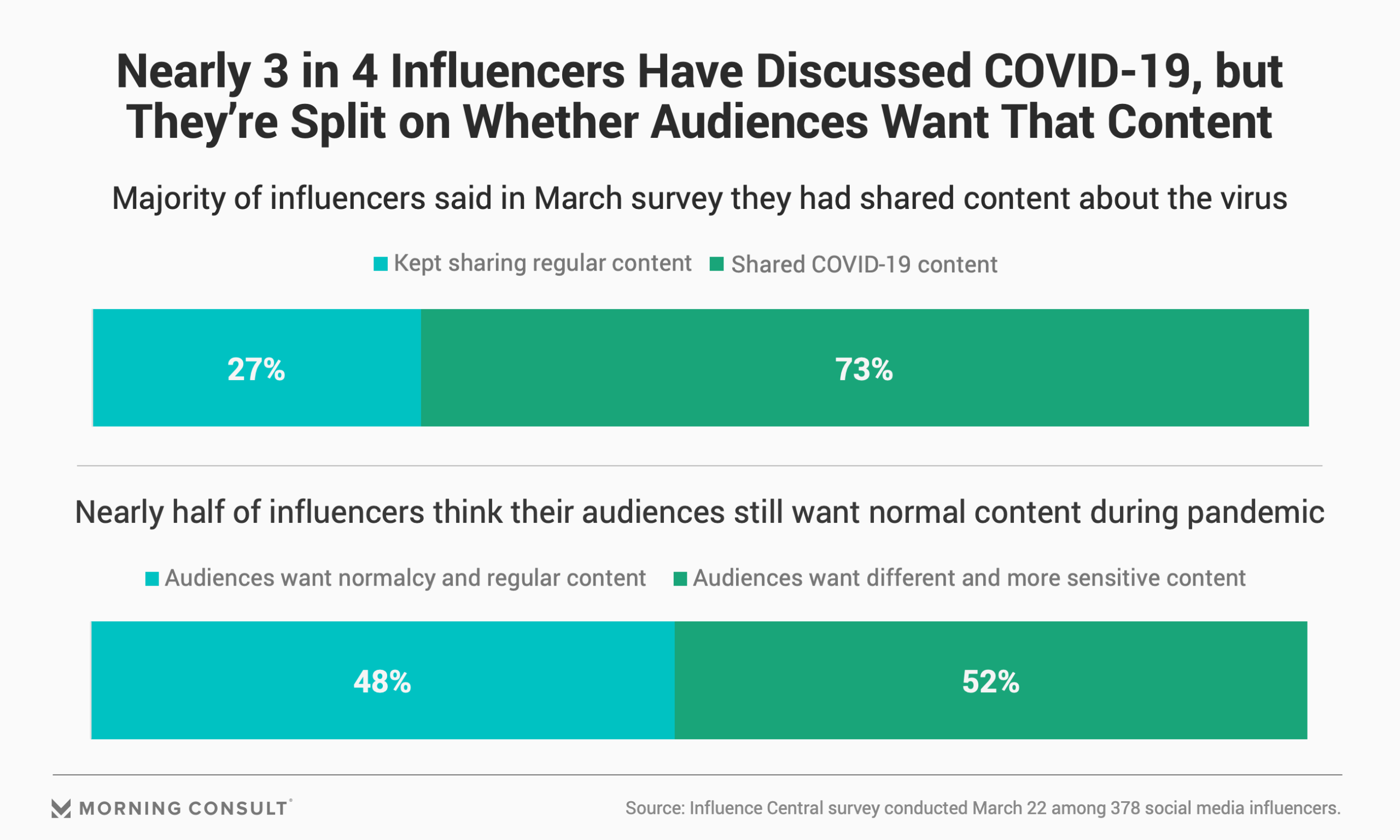 So far, the FTC has sent a few batches of warning letters to companies that overstate how their products can combat the virus, including a set that was released Tuesday in addition to 27 letters sent in the past two months with the Food and Drug Administration — although few, if any, appear to involve influencers directly.

Michael Ostheimer, an attorney with the FTC’s advertising practices division, said in an email that the agency is limited in how much it can crack down on misinformation spread by influencers, noting that unless the account is selling a product or service, it’s outside of the agency’s jurisdiction.

One problem with influencer posts is that it can be difficult to differentiate authentic content from sponsored content, even when a hashtag, like #ad or #sponsored, is included, said Bonnie Patten, executive director of Truth in Advertising, which has previously lobbied the FTC to examine influencer ad disclosures on Instagram.

“One of the reasons why social media influencer marketing works so well is because it really does exude authenticity, and most influencers try and promote goods and services using the same kind of content and visuals that they do in their everyday life,” Patten said. “So it can be impossible just by viewing the post to know whether I’m looking at an ad or not, and in these times of pandemic, that can really make a huge difference.”

Truth in Advertising has been keeping tabs on coronavirus-related scams since the virus started spreading earlier this year. In recent weeks, Patten said most social media marketing tactics have transitioned to subtler forms, such as by describing products as “immunity boosting,” rather than calling them cures or preventions.

And unlike the Fyre Festival, where the celebrity influencers involved in the social media campaign got off without penalties, Patten said the coronavirus could be an opportunity for the FTC to take a harsher tone by ramping up enforcement of the endorsement guidelines it already has in place.

“Rather than having a need to expand the guidelines, this is an example of the FTC needing to take quick and decisive action against some influencers in the hope that would have a deterrent effect on other influencers,” she said.

To help alleviate some of the confusion around authentic and sponsored influencers posts, Mary Keane-Dawson, CEO of Takumi, a United Kingdom-based influencer marketing service, said the FTC should clarify the language in its guidelines, which only provide suggestions — as opposed to explicit instructions — for how influencers should disclose partnerships.

One way the FTC could strengthen its enforcement is by working with other interested agencies. Richard Newman, an FTC defense and internet advertising compliance attorney and managing partner at Hinch Newman LLP, said the FDA, Justice Department, state attorneys general and other local regulatory agencies have already expressed interest in regulating unsubstantiated health claims shared online as a top priority during the pandemic.

And the regulatory crackdown isn’t limited just to direct claims made by influencers and companies. “Anything that expressly or impliedly represents that a product or its ingredients can cure or prevent the coronavirus are likely going to draw scrutiny,” Newman said. “Even more general claims, such as ‘keeping you and your family healthy,’ could imply a cure or prevention claim.”

But not all influencer marketing has been filled with unsubstantiated or questionable coronavirus content. Mae Karwowski, founder and CEO of Obviously, a New York-based influencer marketing agency, said in recent weeks her company has been overwhelmed by the sheer number of influencers reaching out to them for advice on how to create content for their followers during the pandemic.

“There’s been a lot of self-regulating happening on influencers’ accounts, so they see it, too, where a few big influencers have seen some real blowback,” Karwowski said. “So I think all influencers are very aware of what not to do.”