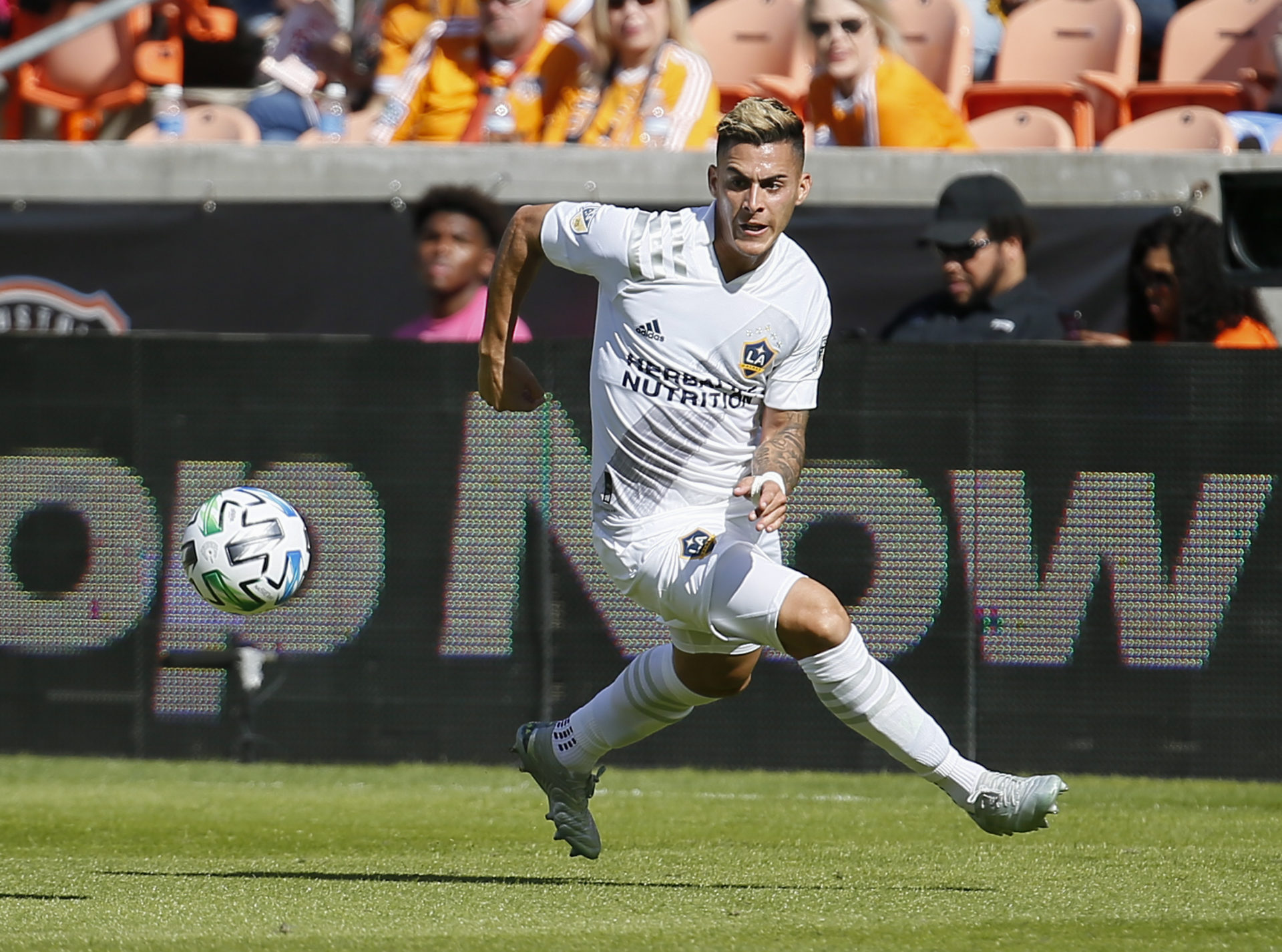 Cristian Pavon of the Los Angeles Galaxy runs down the ball before he scores against the Houston Dynamo during the first half at BBVA Stadium on Feb. 29, 2020 in Houston. (Bob Levey/Getty Images)
By Alex Silverman

Amid the ongoing moratorium on live sports, Univision Communications Inc.’s TUDN is turning to classic games from its four most prominent soccer properties — the Mexican National Team, Liga MX, MLS and UEFA — to fill gaps in its programming schedule and entertain its core audience.

Olek Loewenstein, executive vice president of sports strategy and planning for TUDN in the United States and Mexico, explains in an interview with Morning Consult that there’s more to delivering archived games than just pressing play.

Did TUDN have the rights to air archived matches built into its live rights agreements or did you have to negotiate for them separately with partners?

The archives are always one of those things that we include in the deals that we do. Reason No. 1 is to editorialize whenever we have some of these games. If we have the finals of the Champions League, we can program around it that week and put on “the best of” the finals. And reason No. 2 is, to a certain extent, to protect ourselves from somebody else acquiring these rights and creating unfair competition.

Once you decided you were going to exercise those rights to fill the programming grid, what is the process of getting those matches ready for TV?

First is deciding what editorial concept that we want to air: the best titles, the best games, the best rivalries and so forth.

Then we go about actually acquiring the footage. Even though we have the rights to the content, in most cases we don’t have all these games in our own archives. We have to go through these leagues, and some third parties that outsource the archive for these leagues, to get the footage. Considering the circumstances, a lot of our partners are not even going to their office. So that ends up taking a little bit.

The next step is editing down the games from a two-hour version to a one-hour version and voicing the games. For a Champions League game, we might just do voice and commentary over a 60-minute version. But for a Liga MX or an MLS game, we’re trying to bring some of the protagonists back over the phone or over Skype to comment on some of these games with us. Then we program it and air it.

Why can’t TUDN use the original commentary from when the matches first aired?

We can in some cases, but some of these games were only archived in a “clean” format with no commentary. For example, the European partners don’t keep an archive of every single country that broadcasted the game. So if we try to acquire last year’s Champions League Final, we wouldn’t be able to unless I had saved it with my commentary. UEFA wouldn’t be able to send it back to me with that commentary. They keep the clean feed and the world feed.

For the games we have narrated, we have that original commentary and in many cases we use it. The problem we face sometimes is that editing down a two-hour game to a 60-minute game that has narration, it’s choppy. So we’re better off just re-voicing it. Plus, sometimes the issue is just the quality of the audio.

We have had reactions for the Mexican National Team historic games saying, “Leave the original commentary. We would like to remember it as it was narrated.” And then you have other people that say, “It’s great, because now we have the protagonists and they can look back at the things that happened and how it was.” There are mixed opinions.

What about graphics? Are you creating new graphics for each game or most of the games?

Under these circumstances, I have one-third of my workforce going to the office at a time. So as much as we can avoid creating new graphics for broadcasts, we do.

So when do we do it? If we get historic footage of a game from when MLS started, when Univision wasn’t the broadcaster, sometimes we get a dirty feed with a competitor’s logo. Then we would edit it and put our graphics on top.

Given that nobody knows for sure when these leagues will be back in action, how far out have you planned your programming schedule?

We decided to create a 60-day cycle of the best of the Mexican National Team, of MLS, of European national teams, of Champions League, of Mexican League. And within each one of those buckets, we have topics.

Right now, it’s rivalries. In MLS in the 60-day cycle, we’re looking at the “Cali Clásico” [L.A. Galaxy vs. San Jose Earthquakes], the New York Derby [Red Bulls vs. New York City Football Club], etc. If we move further, we could do the L.A. Galaxy vs. LAFC, etc. Same in Mexico. If we move forward, there’s plenty of editorial topics we could come up with to extend this further.

How is TUDN handling talent and production staff in Miami and in Mexico in terms of social distancing and working in studio versus remotely?

We decided to divide our entire operating base — that includes producers, talent and operations, which is camera, control room, etc. — into three shifts. Every shift works one week. We don’t cross-pollinate between shifts and we produce within those shifts whatever we are able to produce. If we identify somebody that even might have some condition, we close the operation for a day, clean the premises, send the entire shift home for 14 days and we operate with the two other crews.

We’ve been lucky so far in that we haven’t had any cases. Essential personnel are going to the studios. We’re keeping complete social distancing. For example, when we call these games, these archived games, we’re putting the talent in separate booths. We clean before and after every game.

Have you gotten a sense from the leaders of any of these leagues about when they’re looking to get back on the pitch?

We get a sense almost every week, and it’s always a different sense. Leagues are definitely prioritizing health and safety standards before anything else. I think all the teams are getting ready for a scenario where they would play behind closed doors in a limited amount of venues.

Sports are going to come back sooner than some other elements of our daily life. However, I don’t see how sports come back with fans in the stands anytime soon.

This interview has been edited and condensed.