Americans Remain Pessimistic About Entering Public Spaces in the Near Future

People walk outside a closed AMC movie theater on March 17, 2020 in Santa Monica, California. 26% say they don’t expect to feel comfortable going to the mall or the movies for at least six months. (Mario Tama/Getty Images)
By Alyssa Meyers

More than a month since President Donald Trump declared a national emergency, new trend data shows that consumers’ timeline for when they’ll feel comfortable heading back to many public spaces and events has not budged. 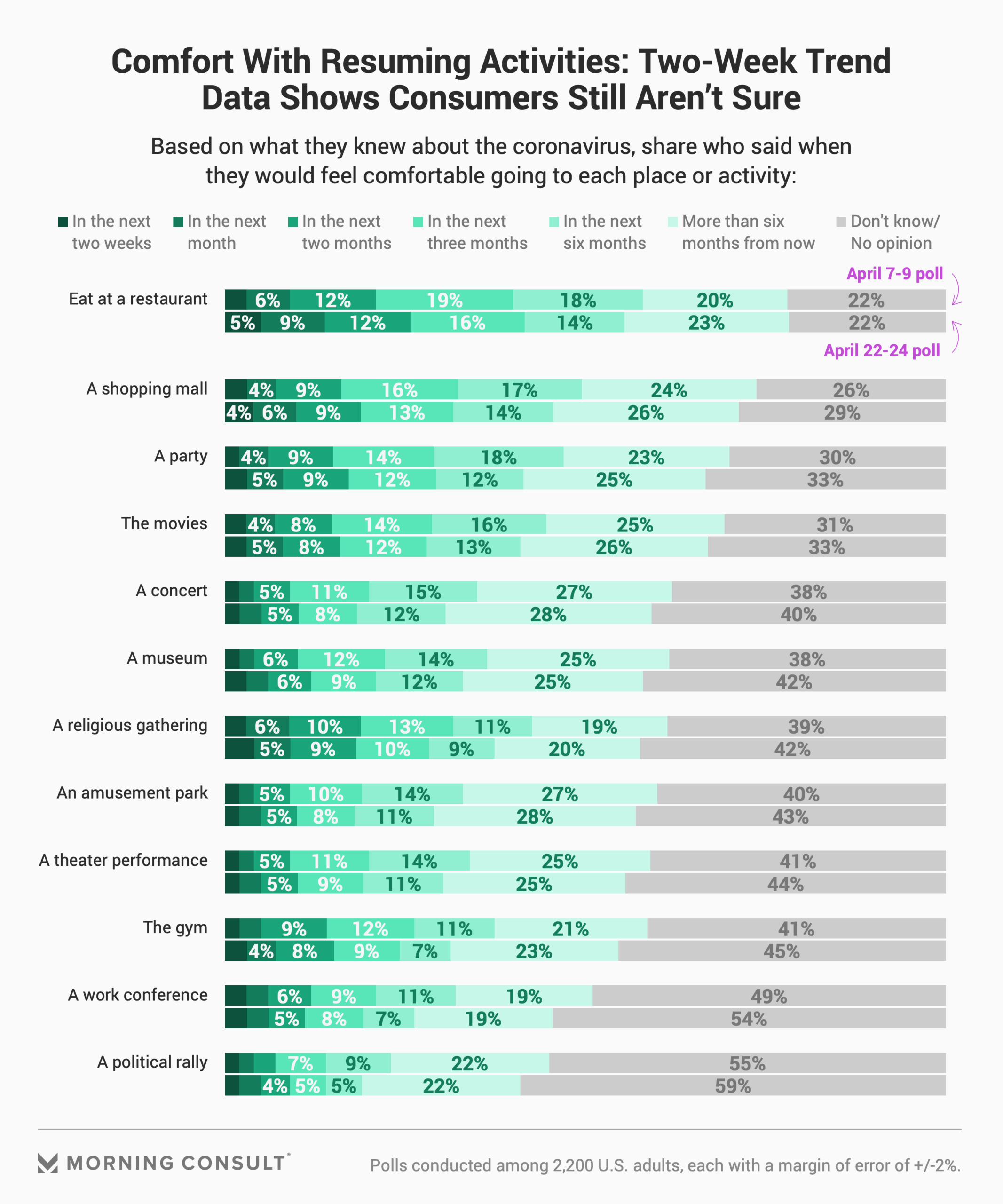 Morning Consult asked when U.S. adults would feel safe doing a range of activities, from eating out at restaurants to going to the gym. The April 22-24 questions were trended from an April 7-9 survey, to see if and how attitudes have changed.

Respondents were slightly more likely to say they’d feel comfortable eating at a restaurant in the next two months than they did two weeks ago, but attitudes on nearly every other activity remained the same.

Nearly one quarter to more than half of respondents said they don’t know or have no opinion about when they might feel comfortable resuming these public activities, shares that have ticked up since the last poll.

The survey was taken among 2,200 U.S. adults and holds a margin of error of 2 percentage points.

Some states are more eager to reopen their public spaces than others, with a few Republican governors urging businesses to open their doors sooner rather than later. In Georgia, Gov. Brian Kemp signed off on businesses — including theaters and dine-in restaurants — reopening April 27 with social distancing and sanitation mandates.

Other states will soon follow, including Alabama, Idaho, Louisiana, Michigan and Pennsylvania, all of which have stay-at-home orders set to lift April 30.

Movie theaters are among the companies hardest hit by the pandemic, with analysts predicting bankruptcy for AMC Entertainment Holdings Inc.

But even if theaters do reopen soon, 26 percent of consumers said they won’t feel comfortable going back for at least another six months, compared to 25 percent earlier this month. Roughly one-third said they weren’t sure or offered no opinion.

In addition to leisure activities like shopping, eating out and going to see movies, U.S. adults also said they expect to take longer than six months before they feel comfortable attending political rallies.

With the presidential election approaching and former Vice President Joe Biden all but confirmed as the Democratic nominee, 22 percent of adults said it would be at least six months until they think they’ll feel comfortable attending a rally, the same share who said so in the April 7-9 poll.