Senate Majority Leader Mitch McConnell (R-Ky.) speaks during a news briefing at the U.S. Capitol April 21, 2020 in Washington, DC. While McConnell has voiced skepticism about providing aid to states struggling financially during the pandemic, 74% of voters say the federal government has a responsibility to help states during this time. (Photo by Chip Somodevilla/Getty Images)
By Eli Yokley

Congressional Democrats are backed by broad public support as they push for the next coronavirus spending package to include big funding for state and local governments reeling from the pandemic’s strain on their budgets, but polling suggests the attacks from Republican leaders regarding blue-state spending could prove effective with GOP voters. 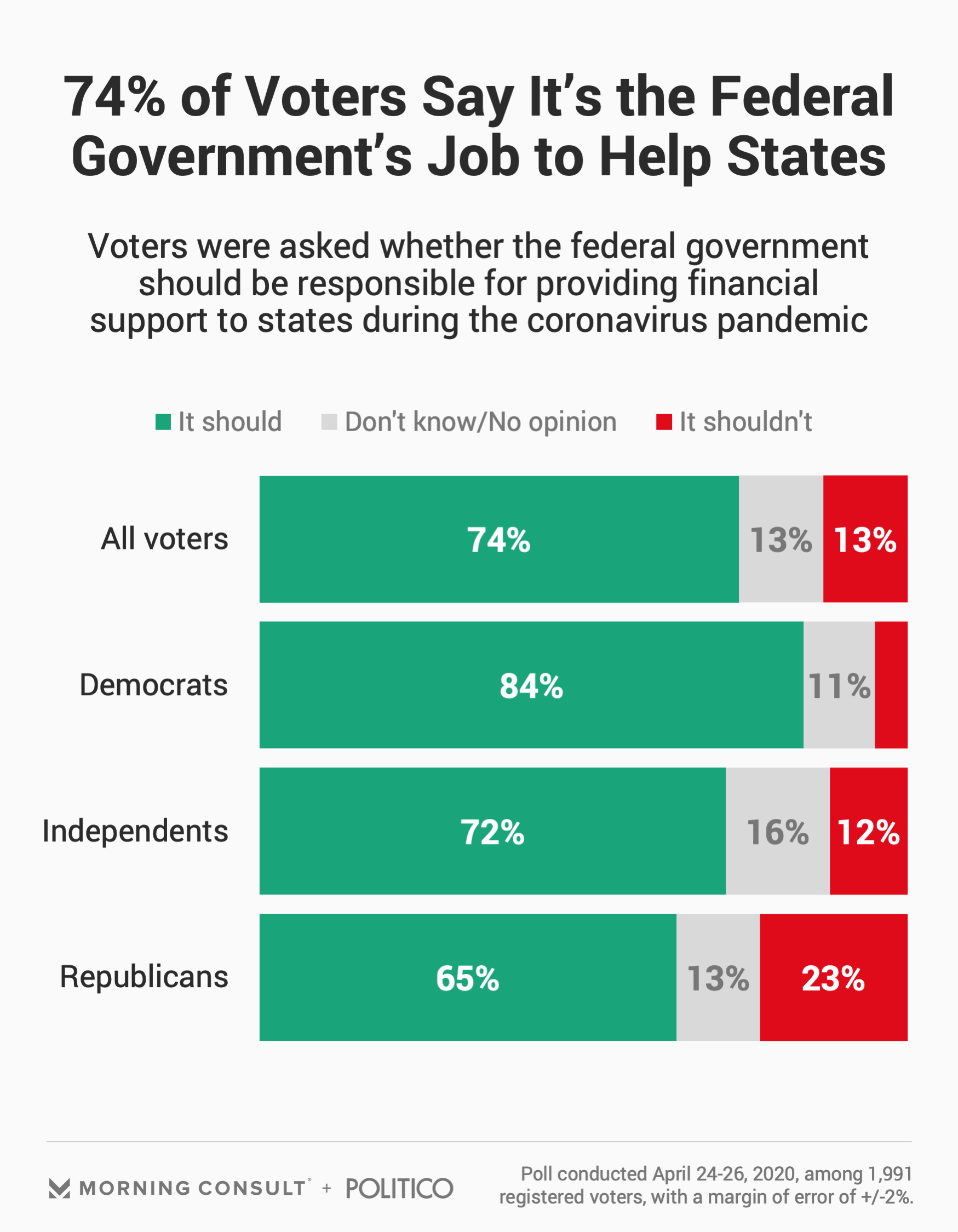 A new Morning Consult/Politico poll found 74 percent of registered voters, including 84 percent of Democrats and 65 percent of Republicans, agreed that the federal government should be responsible for providing financial support to states during the coronavirus pandemic. The April 24-26 poll surveyed 1,991 registered voters, with a margin of error of 2 percentage points.

Resistance to helping states is modest and was driven by Republicans voters, who were nearly five times more likely than Democrats to say the federal government should not be responsible for giving a backstop, 23 percent to 5 percent.

Both red and blue states nationwide, including President Donald Trump’s former home state of New York and Senate Majority Leader Mitch McConnell’s home of Kentucky, have projected budget shortfalls amid the pandemic, according to the National Conference of State Legislatures.

But in his opening arguments last week for the next coronavirus package, McConnell voiced skepticism about the intentions of some states in seeking aid, with his office slamming the prospect of “blue state bailouts.” He said states should consider bankruptcy instead.

The suggestion was widely condemned by leaders on both sides of the aisle, with Gov. Andrew Cuomo (D-N.Y.) calling it “one of the really dumb ideas of all time,” and Gov. Larry Hogan (R-Md.), who chairs the National Governors Association, labeling it “complete nonsense.” In Kentucky, Democrat Amy McGrath, McConnell’s likely challenger in November, released a new campaign ad on Monday that criticized the bankruptcy comments.

While McConnell softened his tone in a Politico interview published Monday, opening the door for negotiations on state assistance but saying he was opposed to cutting localities checks to “finance mistakes they’ve made unrelated to the coronavirus,” Trump went further in a Monday tweet, questioning why Americans should be “bailing out poorly run states” and cities that are managed by Democrats.

However, polling suggests framing the idea of assistance ideologically is particularly effective in swaying Republican voters against spending. 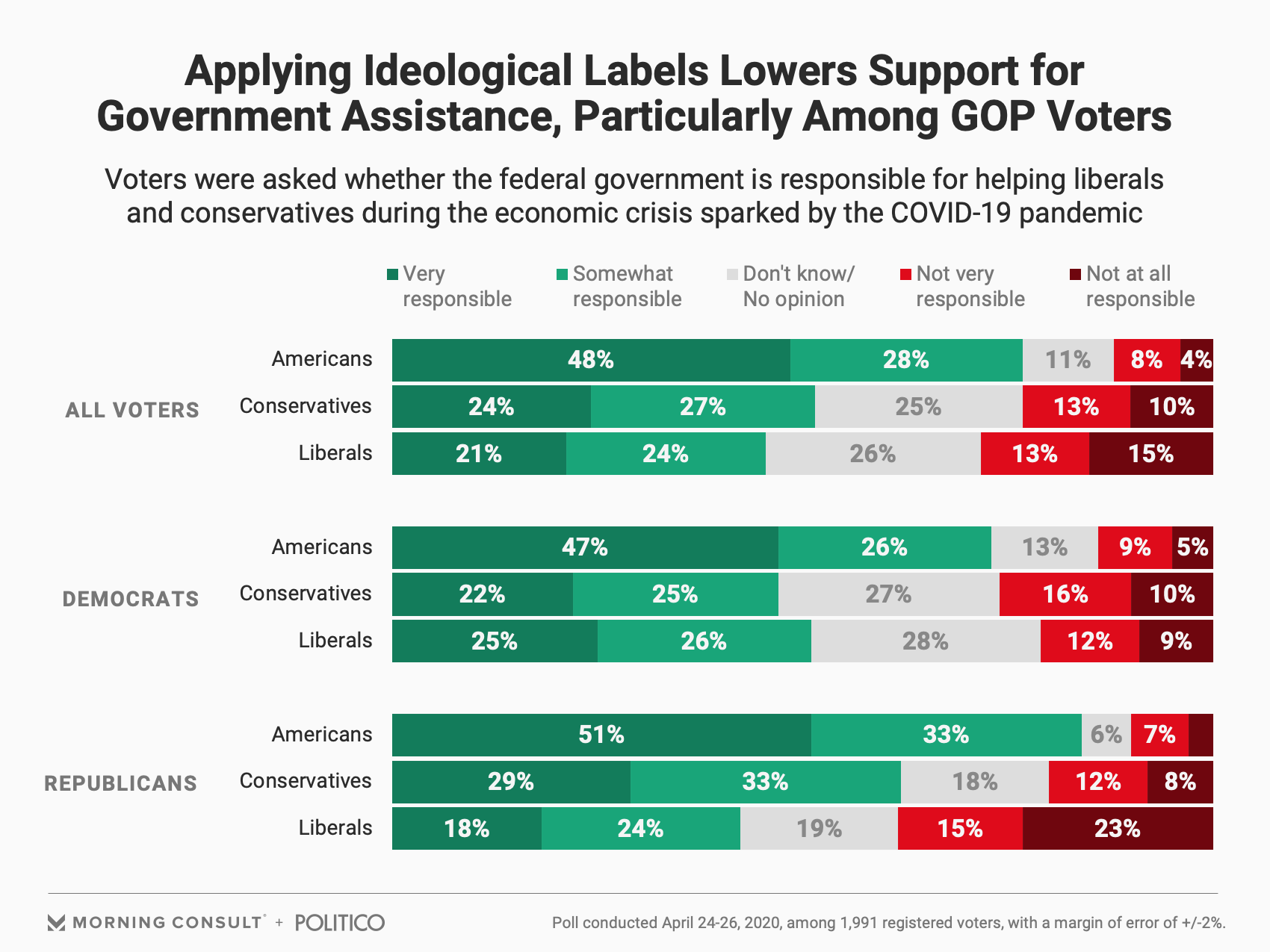 Voters of both parties are generally on the same page when asked how responsible the federal government should be for helping Americans during the economic hardship brought about by the coronavirus pandemic, but Republicans split widely when the question was posed on ideological terms.

House Speaker Nancy Pelosi (D-Calif.) pushed back on the partisan talk in a conference call with reporters on Tuesday, saying “support for state and local is bipartisan.” As lawmakers plot their next moves, she suggested $500 billion may be needed for states, and maybe more for counties and municipalities, doled out over time.

“Governors and mayors are crying out for support,” she said.