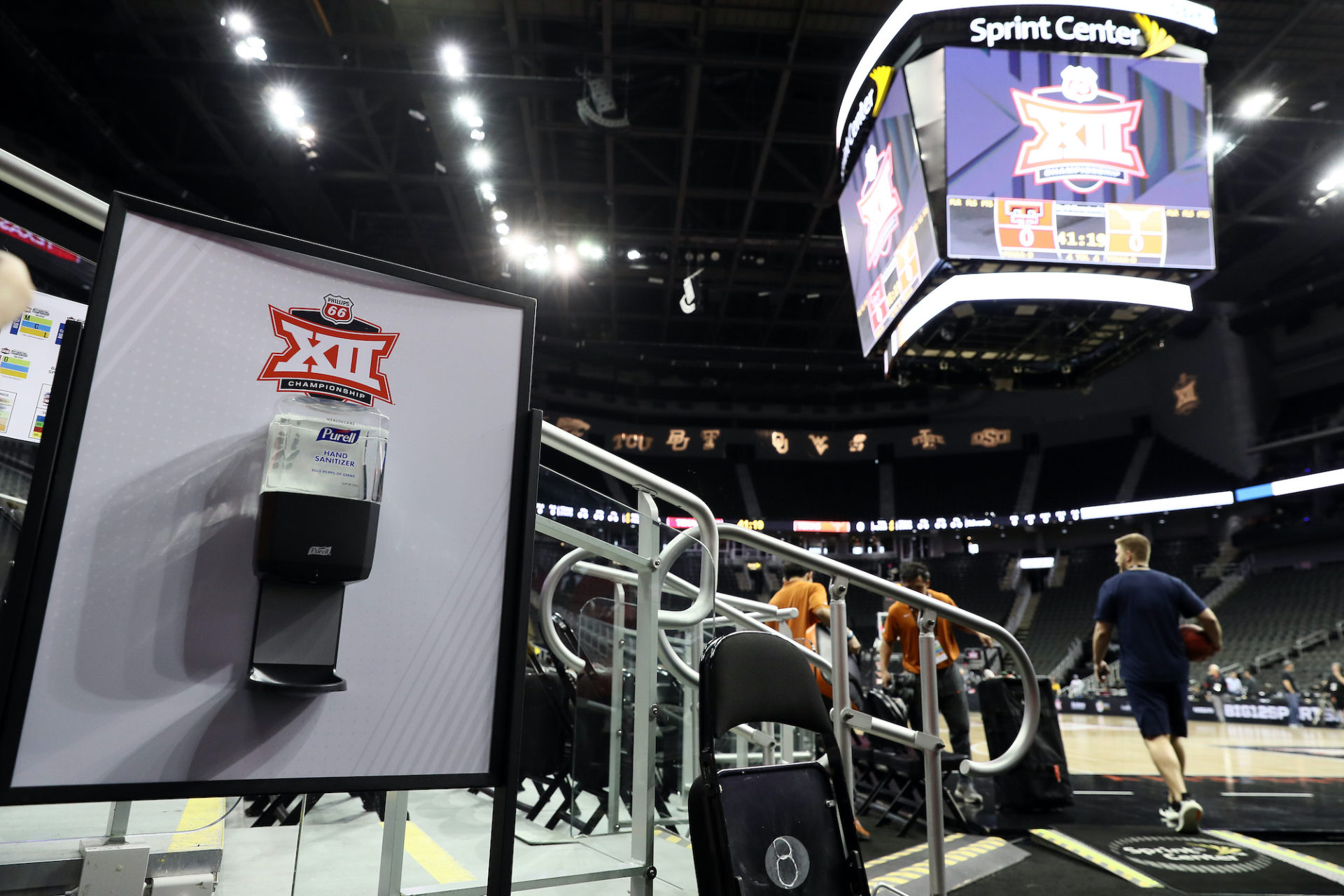 A hand sanitizer station sits courtside prior to the Big 12 quarterfinal games at the Sprint Center on March 12, 2020 in Kansas City, Missouri. 76% of event-goers say the addition of hand sanitizer dispensers would make them more comfortable attending games. (Jamie Squire/Getty Images)
By Alex Silverman

The coronavirus presents a new challenge for U.S. sports teams, leagues, facility managers, security firms and equipment manufacturers that, until recently, wasn’t a thought in most experts’ minds.

“When we do risk management training or evacuation exercises, we do consider all hazards, but primarily it’s been terrorist-related incidents or inclement weather or crowd management issues,” said Dr. Stacey Hall, who runs the National Center for Spectator Sports Safety and Security at the University of Southern Mississippi. “But as for a pandemic or a global public health crisis — it wasn’t at the forefront.” 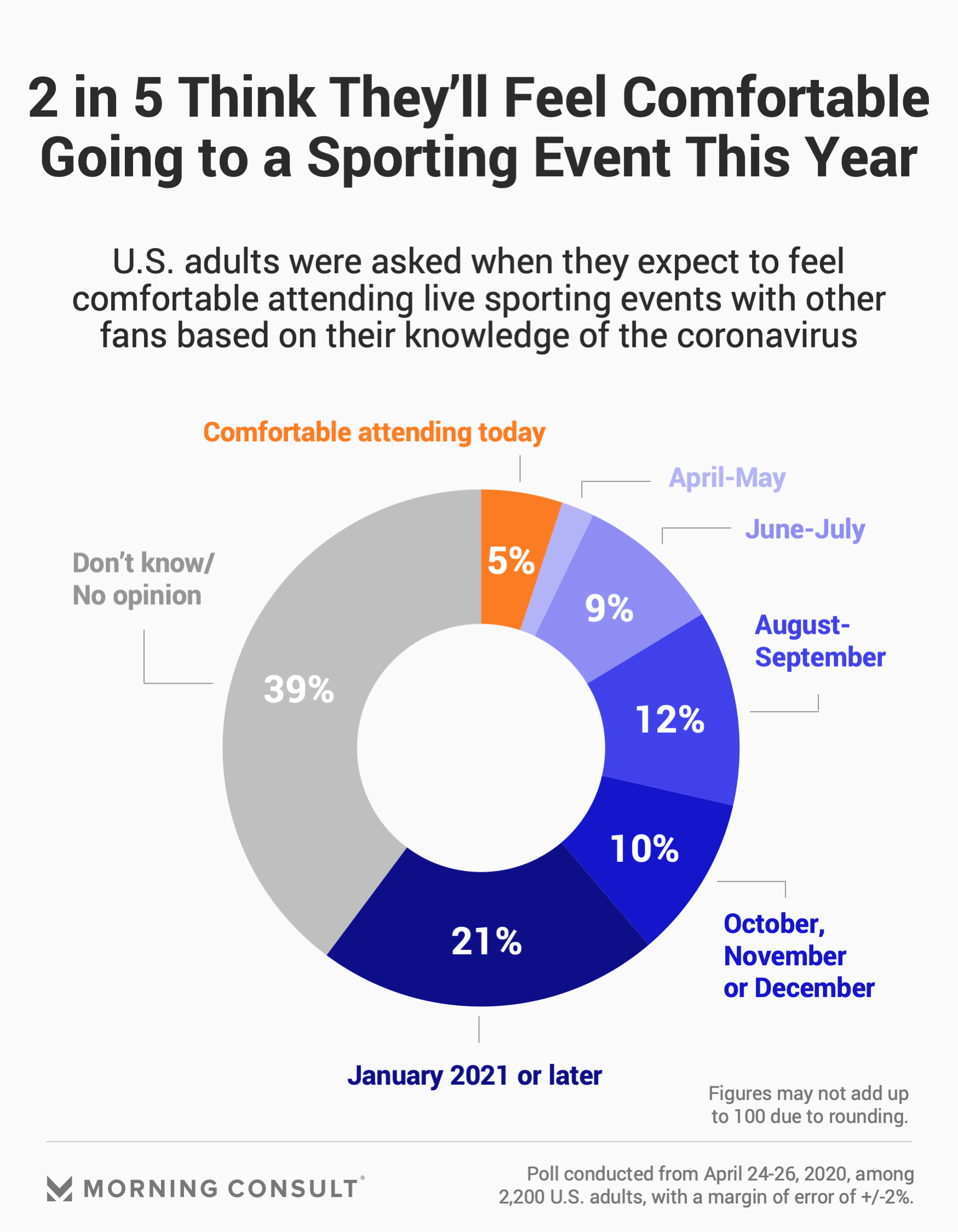 Over the past six weeks, Hall and her colleagues in the sports safety space have started exploring a wide range of potential measures to combat the spread of the coronavirus in venues and provide fans with peace of mind upon their return. A recent Morning Consult poll shows that less than 40 percent of U.S. adults anticipate feeling comfortable attending a sporting event sometime this year.

Individuals who said they attend sporting events at least occasionally point to the addition of hand sanitizer dispensers and communication of venue cleaning practices as the measures most likely to make them more comfortable attending games, according to the April 24-26 survey. About 3 in 4 said each of those actions would help put them at ease, a larger share than other higher-tech options that industry insiders are considering.

The survey was conducted among 2,200 U.S. adults, including 1,242 who attend sporting events, with respective margins of error of 2 and 3 percentage points.

Drew Pittman, an associate athletics director overseeing event management and facilities and Baylor University, said the overwhelming demand for hand sanitizer amid the COVID-19 pandemic could make it difficult for facilities to obtain enough for tens of thousands of visitors.

Another low-tech option, requiring fans to wear surgical or cloth masks over their nose and mouth, received support from 62 percent of event-goers. 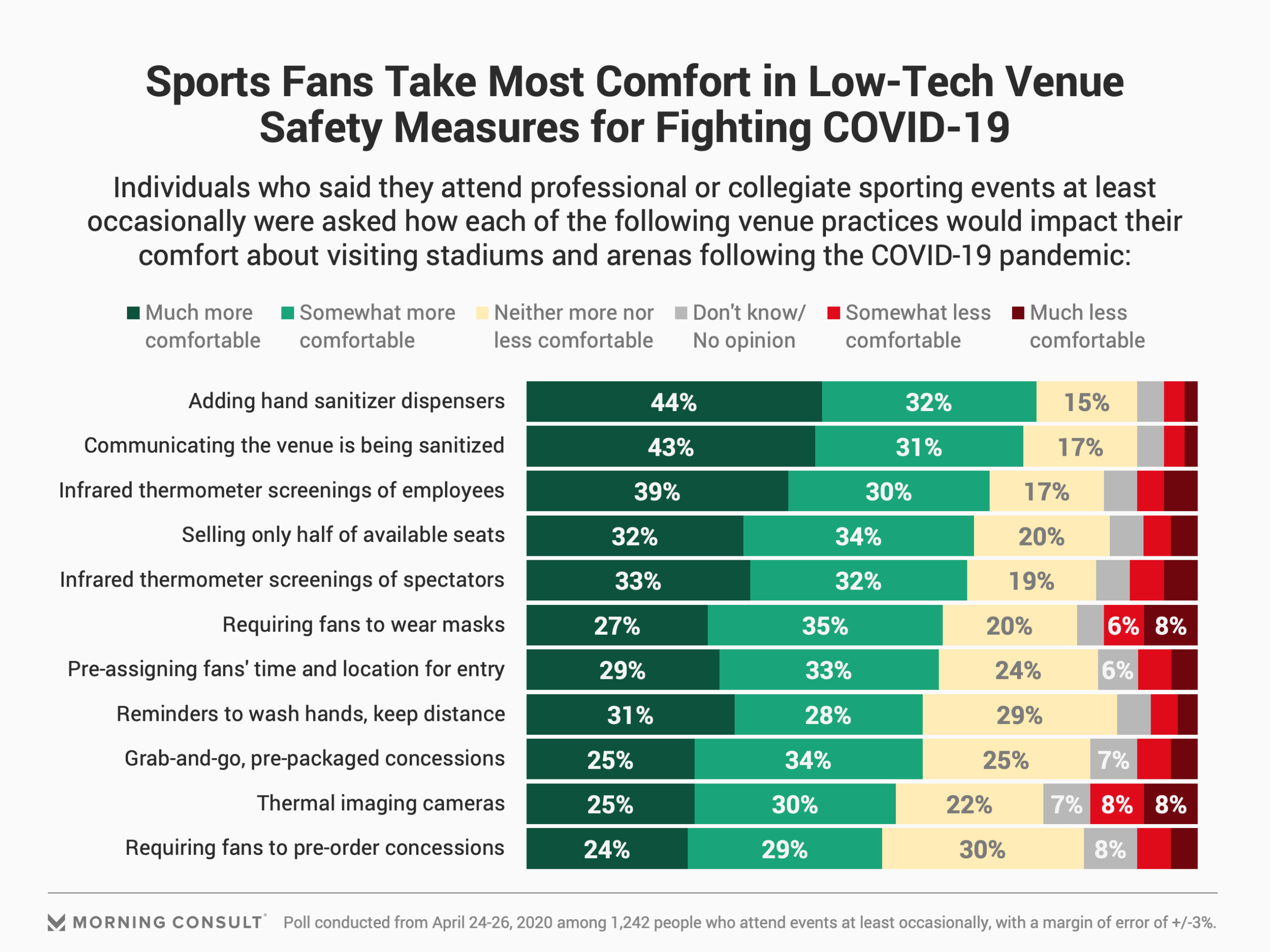 The introduction of temperature screenings for employees and fans upon entry is among the more logistically complex measures being considered by sports properties and facilities. Sixty-nine percent of regular event-goers said screening employees using an infrared thermometer would make them more comfortable, while 65 percent expressed support for taking fans’ temperatures.

While infrared thermometer “guns” are seen as the most accurate solution, the individual administering the screening needs to be within a few feet of the subject, putting the temperature-taker at risk of getting sick. In addition, the devices can only take one person’s temperature at a time, a limitation that could lead to longer lines for fans.

A potentially quicker, less-intrusive alternative is thermal imaging technology, which uses specialized cameras and artificial intelligence to detect the body temperature of one or more individuals at a time at a greater distance than an infrared thermometer.

Depending on the configuration, fans or employees filing into a venue might not need to stop to have their temperature read by these devices.

“A lot of folks are looking at this type of technology because it is passive; it is contactless,” said Kyle Hopkins, vice president of customer development for 911 Security, which counts the Houston Astros and Washington Redskins among its clients.

More than half of sports attendees took some level of comfort in the idea of cameras reading entrants’ body temperature, but 16 percent of respondents said the use of thermal imaging technology would make them feel less comfortable.

Hopkins said individual thermal imaging units can range in price from $2,000 to $40,000 each, adding that you pay for what you get in terms of accuracy. He foresees employee screening will be the most common use case for the technology, at least in the short term, given the cost to scale it for thousands of people across multiple entrances, as well as the potential for false positives.

But Hopkins, Pittman and Hall all expressed uncertainty about how venue staff would handle a customer who exhibits an above-normal body temperature, citing potential legal issues associated with denying entry to a paying customer.

In addition, passing either type of temperature check doesn’t necessarily mean an individual doesn’t have coronavirus, as many of those infected don’t show symptoms. Medications such as Tylenol and Advil can also temporarily reduce a fever, potentially allowing an infected individual to proceed past the temperature screening undetected.

Processes surrounding concessions are also being rethought amid the pandemic. Solutions include offering more pre-packaged items to reduce the potential for contamination and developing grab-and-go processes to reduce crowding. The latter could include expanding the use of mobile ordering.

“We’re talking to our concession vendor about transitioning traditional stands to pickup-only locations,” Pittman said, adding that condiment pumps might be eliminated at Baylor in favor of packets.

In order to adhere to social distancing practices, facility managers, including Pittman, are considering the use of a virtual queuing system. Pittman said he would need to roughly quadruple the amount of space each fan has while standing in line to enter the game.

A virtual queuing system would stagger entry to a venue over a certain period of time and across all available entrances by requiring fans to pre-select their entry time and gate ahead of time, reducing the usual rush of fans in the 15 minutes before game time. Baylor is currently working with the school’s app developer, Yinzcam Inc, and ticketing partner, Paciolan LLC, to create such a system and integrate it into Baylor’s game day app.

Sixty-two percent of event attendees said a virtual queuing system would make them more comfortable attending a game. That’s compared to 66 percent who said they’d feel more comfortable if only half of available seats are sold to facilitate social distancing once fans are inside the facility.

Hall also suggested that teams encourage fans not to travel to road games, which at the collegiate level could involve putting a pause on the practice of providing the opposing school with an allotment of seats to sell to students and alumni.

Pittman said the top concern among the other Big 12 event managers he’s spoken with — more than any one safety or security measure — is how to deliver a message about the safety practices they’re implementing that will make fans feel safe again in arenas and stadiums.

“In a lot of instances, people are going to have less income to utilize depending on their job situation,” he said. “So how do we make people feel safe and what’s our message to them?” 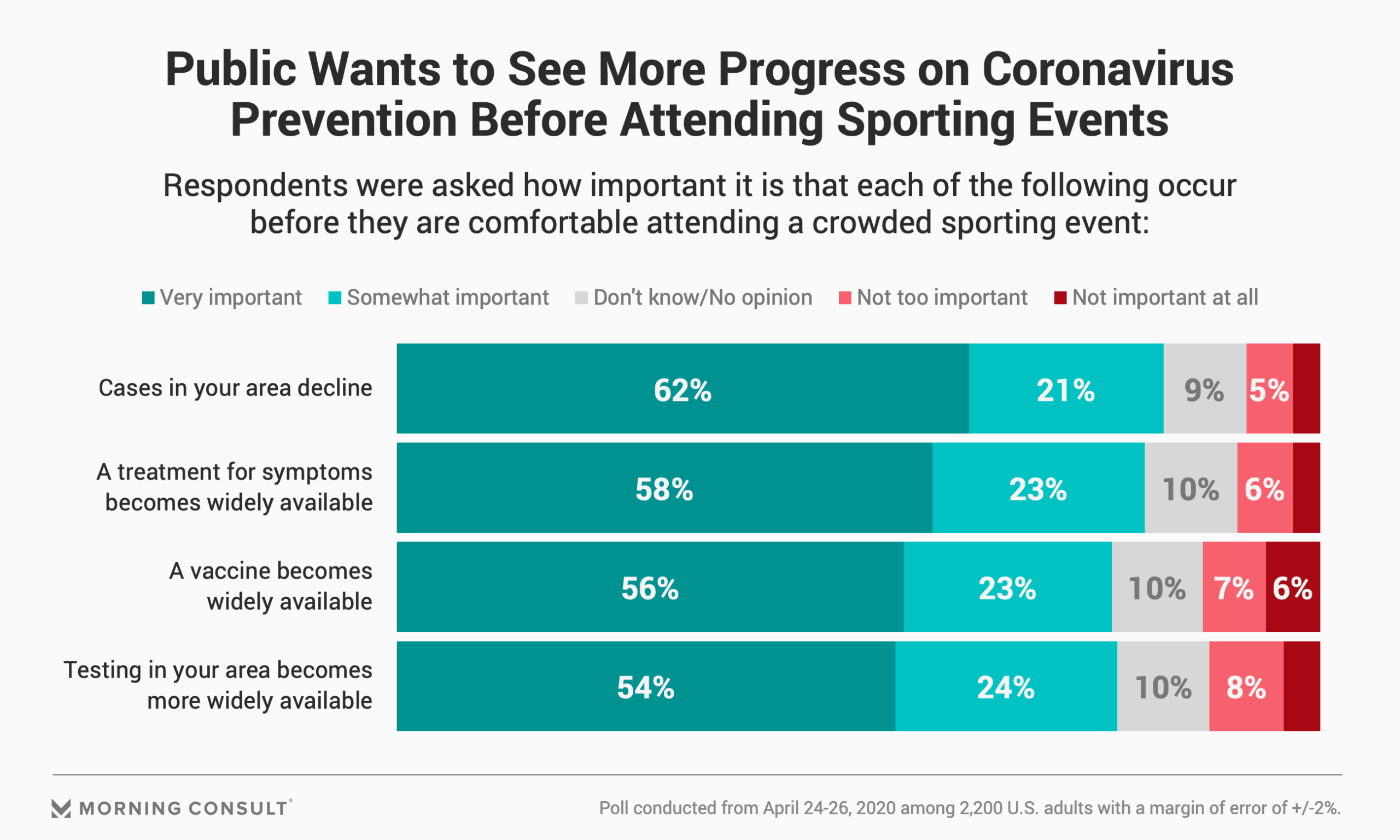 Unfortunately for those in sports, the most significant hurdles to restoring the public’s comfort are largely out of their hands.

Eighty-three percent of adults surveyed said it is important that COVID-19 cases in their geographic area decline before they would be comfortable attending crowded sporting events again, including 62 percent who called a drop in cases “very important.”