As ‘all possible resources’ are called to action, voters trust local and state agencies more than FEMA 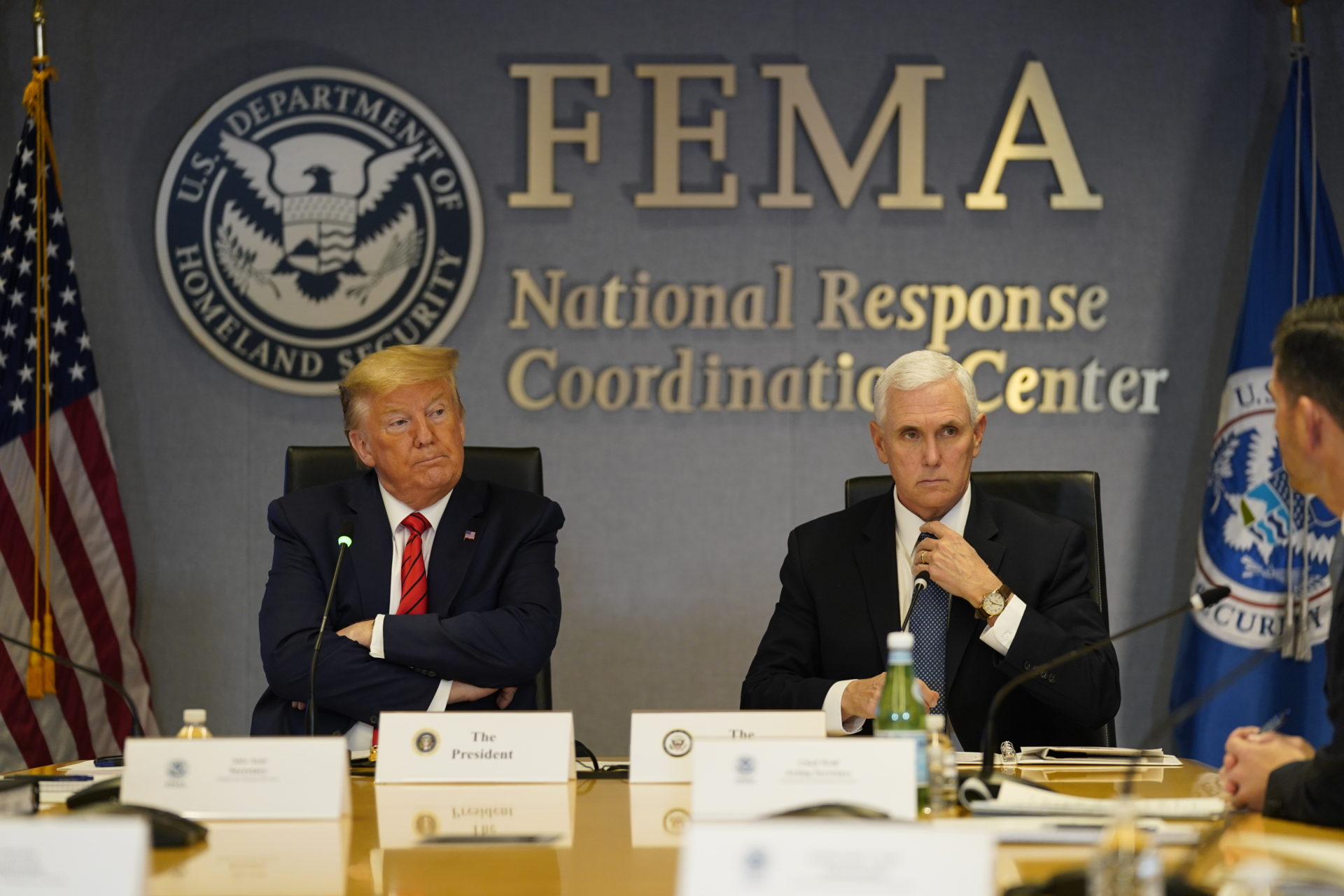 President Donald Trump and Vice President Mike Pence attend a teleconference with governors at the Federal Emergency Management Agency headquarters on March 19, 2020, in Washington, D.C. An April 3-5 Morning Consult poll found that 78 percent of registered voters approved of how their local or state emergency response agencies were handling the spread of the coronavirus, compared with 63 percent for FEMA. (Evan Vucci-Pool/Getty Images)
By Lisa Martine Jenkins

For those on the frontlines of emergency management, the coronavirus pandemic is an unprecedented event, with experts noting that it is the first time the United States has had every single emergency-focused agency activated simultaneously.

Consequently, the country is seeing a glimpse of what an overwhelmed system looks like, which emergency management professionals say will be an increasingly common experience as the impacts of climate change intensify. The question, however, is whether agencies and planners will consider those impacts once things return to “normal.”

So far this year, FEMA lists 166 disaster declarations, compared with 101 in all of 2019. The vast majority of these are COVID-19 declarations at the state or territory level. And hurricane season and wildfire season — which begin in June and late summer, respectively — have yet to get underway.

While it is too soon to tell for sure, Montano said the coronavirus pandemic will likely be a “focusing event” — a disaster, such as the 1933 Long Beach earthquake or the Sept. 11 attacks, that captures the attention of lawmakers and leads to policy changes. She suspects COVID-19 will prompt changes to pandemic-planning requirements and the national stockpile, especially about how much and what kind of personal protective equipment is included. But changing how we prepare for a pandemic is not enough, she said, because disasters — and climate change specifically — require mitigation and preparedness.

“We are incredibly reactive in this country,” Montano said. “We wait for a disaster to happen and then we react to it. And we need to be proactive.”

Rob Dale, a meteorologist and planner for the Office of Homeland Security and Emergency Management in Ingham County, Mich., broadly agreed. He said his goal during the pandemic is to convey a need to enhance U.S. emergency management processes in preparation for the known variables of climate change, noting that scientists’ coronavirus “warnings were ignored even as we saw other countries suffering from it.”

“We don’t know exactly how many more flood events we’ll get, and we don’t know how bad droughts will be, but we know we’ll get them and they’ll be worse than before,” Dale said. “Will the COVID response make people more responsive to the ‘big picture knowns’ even if the small-scale details are not? I hope so.”

On the federal level, pandemics are typically the province of public health agencies such as the Centers for Disease Control and Prevention and the Department of Health and Human Services, with emergency management agencies playing a supporting role. But the scope of the coronavirus’ impact has changed the game.

On March 13, President Donald Trump activated the Federal Emergency Management Agency when he invoked the Stafford Act and declared the coronavirus pandemic a national emergency. Now, FEMA is leading the federal operations in response to the crisis. While not officially a member of the president’s coronavirus task force, FEMA Administrator Pete Gaynor attends the group’s regular White House meetings, according to a spokesperson for the agency.

“In an era of reduced capabilities and resources due to budget cutbacks, the personnel and material needed to handle multiple incidents might not be at the level best suited to help in response and recovery,” said Dale, adding that a natural disaster in the coming months “would be far more impactful than a hurricane during ‘normal’ times.”

So far the bulk of the pandemic response has happened on the state and local levels, through both government and non-governmental organizations. But the nationwide response has highlighted the scope of the country’s ability to marshal resources for future crises.

As of April 16, more than 2,900 of FEMA’s approximately 20,500 employees were actively supporting the pandemic response, with the rest “prepared to respond to other emergencies should they occur.” And the agency is actively recruiting new staff, including from its pool of federal annuitants, returned Peace Corps volunteers and Americorps members.

“In the current COVID-19 response, every level of government, the private sector, nonprofits and faith-based organizations are all involved, so all possible resources are being put to use,” FEMA said in an email. “And in any future response, those will be valuable resources that can be brought to the table.” 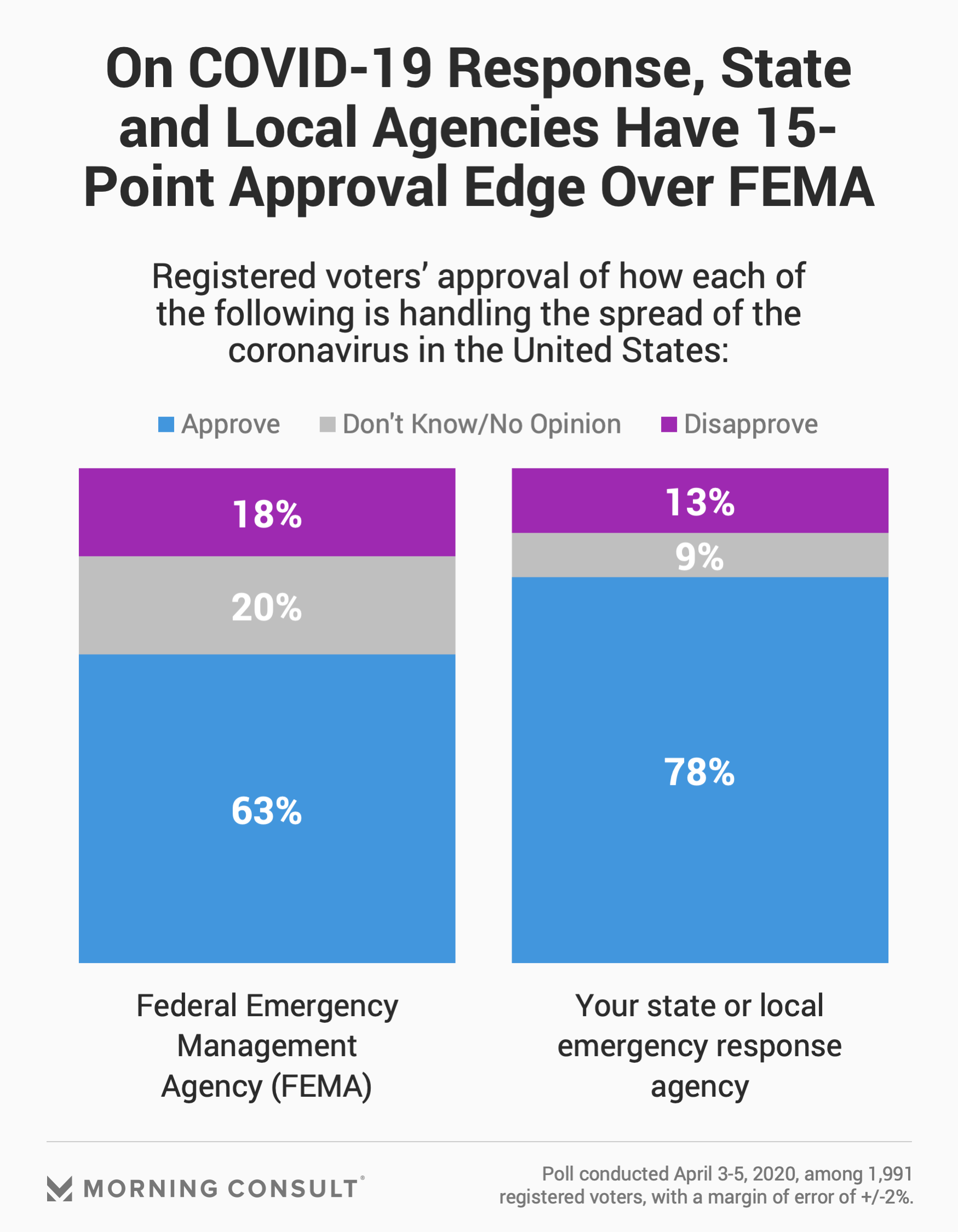 State emergency management agencies are serving as a go-between to coordinate responses and mutual aid needs between local governments and state and federal agencies. The scope, the managers say, is unprecedented.

“This pandemic has a very direct impact on every community, neighborhood, county, city and special district, while wildfires typically have a regionalized or localized impact by comparison,” said Brad Alexander, chief of public information and media relations for California’s Office of Emergency Services.

These local and state agencies are more likely to see public approval for their efforts. According to an April 3-5 Morning Consult poll, nearly 4 in 5 registered voters said they approved of how their local or state emergency response agencies were handling the spread of the coronavirus, compared with 63 percent for FEMA.

And more than twice as many voters answered “don’t know/no opinion” about FEMA than about the local and state agencies — 20 percent versus 9 percent — indicating higher levels of familiarity with more localized efforts.

The poll surveyed 1,991 voters and has a margin of error of 2 percentage points.

But while agencies may be getting high marks for their coronavirus response, Montano said she’s concerned that most agencies haven’t done much to account for climate change in hazard and risk assessment plans.

“As we move forward in time, and the less we do to actually mitigate climate change itself, the more risk we’re going to have across the country,” Montano said. While FEMA devotes an entire section of its website to the impacts of climate change, it does not appear to have been updated in over two years.

But things are beginning to change. For instance, in 2014 Dale reviewed more than 70 Michigan emergency management plans. He said most made no mention of climate change, and those that did were missing thorough consideration of the phenomenon’s effects. Today, however, Michigan has an entire section of its emergency management plan on climate change, and Dale said jurisdictions are more likely to add similar language as a result.

And California’s Alexander said the state includes climate change in its own planning for the future “because it can be a factor in exacerbating impacts.”

But Dale cautioned that the pandemic has been hard on government entities that rely on sales and income taxes, making it more difficult for them financially to expand their climate change preparedness efforts. If well-meaning departments want to do more to prepare for the effects of climate change, he worries that many systems won’t have the budget to expand their plans significantly for the foreseeable future.

“I think policymakers need to take the time now before a second disaster to consider what their community is capable of responding to, and what resources might be needed, and make plans accordingly,” he said. “As the climate changes, the frequency of severe weather — be it flash floods or droughts — will increase. And we now realize what a pandemic does to our society, and we know that will come again, too.”