Former Vice President Joe Biden arrives at the Hotel Du Pont in Wilmington, Del., on March 12 to deliver remarks about the coronavirus pandemic. According to a new poll, 26 percent of Democratic voters who saw Biden's denial of sexual assault allegations made by former Senate staffer Tara Reade want the Democratic Party to select a different presidential nominee. (Drew Angerer/Getty Images)
By Eli Yokley

Former Vice President Joe Biden’s unequivocal denial of Tara Reade’s sexual assault allegation is considered credible by most Democratic voters, according to a new Morning Consult poll that showed a video of his comment, but more than a quarter of the party’s rank and file nonetheless want the presumptive nominee replaced.

Twenty-six percent of Democratic voters in the May 2-3 survey said the party should select a different candidate for the 2020 general election, while 61 percent said Biden should still be the one to challenge President Donald Trump in November. 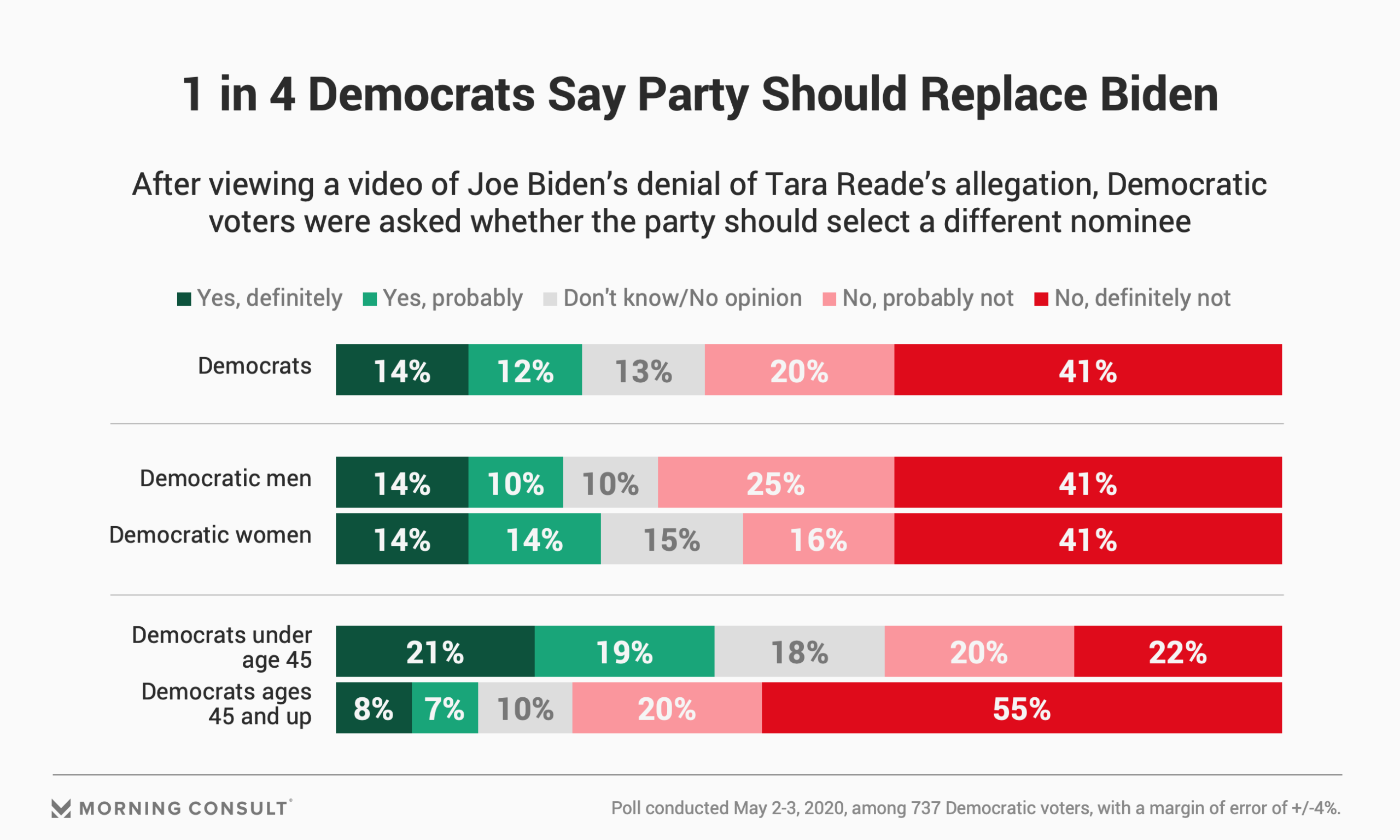 Support for replacing Biden atop the ticket was driven by the party’s youngest voters, a group that mostly backed Sen. Bernie Sanders (I-Vt.) in the Democratic primary and is more likely to view the former vice president with skepticism. Forty percent of Democrats under the age of 45 said the party should pick a different nominee, compared to 15 percent of those ages 45 and older.

The responses came after respondents were shown a 35-second video clip of Biden’s first interview on the subject, where MSNBC’s Mika Brzezinski detailed Reade’s allegation and asked point-blank if he sexually assaulted her.

“No. It is not true. I’m saying unequivocally: It never, never happened. It didn’t. It never happened,” Biden said in the interview.

A Morning Consult/Politico survey conducted May 2-3 posed the same question to voters but only provided details of Reade’s allegation. It found 28 percent of Democrats said Biden should be replaced atop the ticket, within the sample’s margin of error of 3 percentage points. 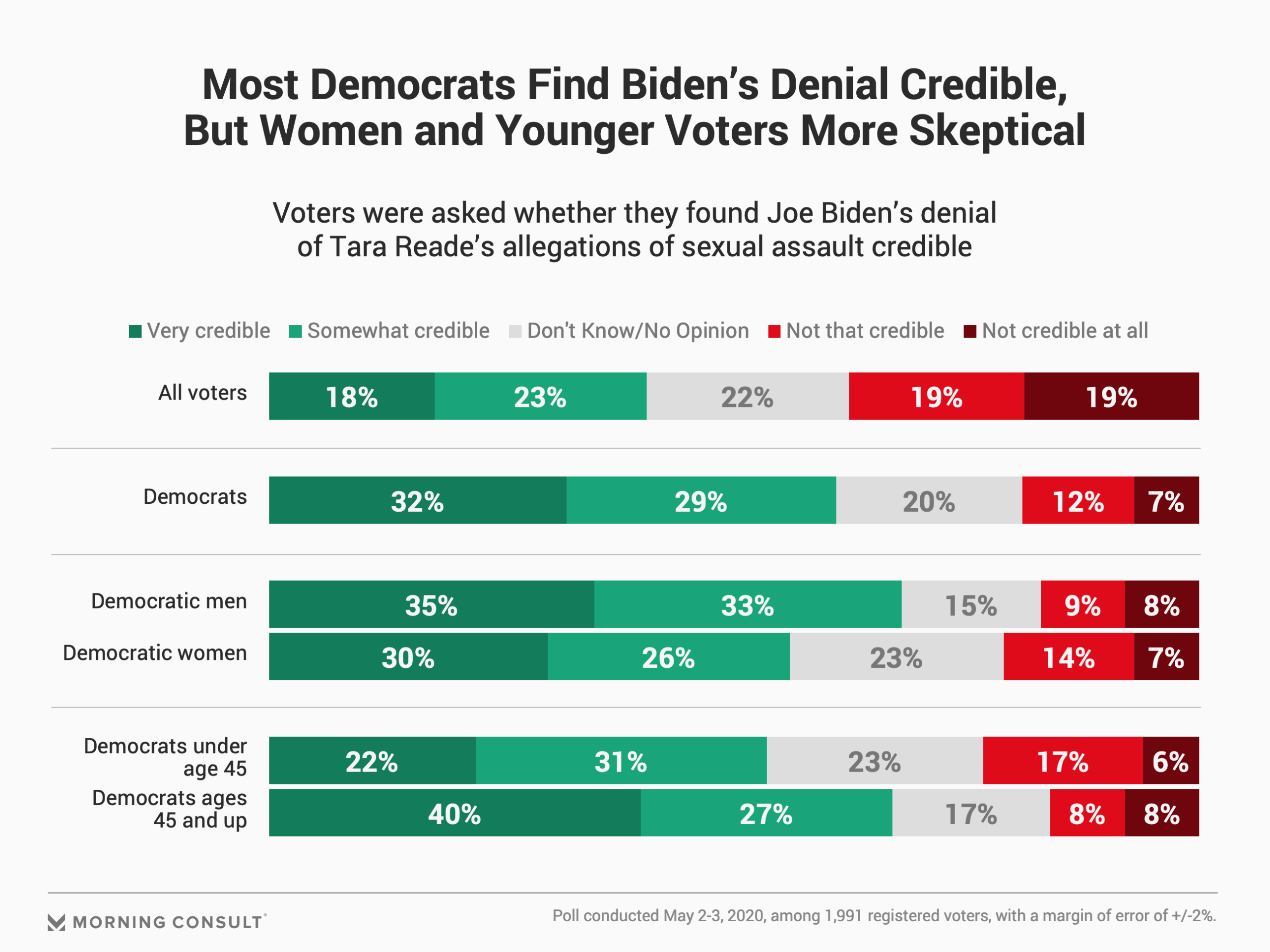 Biden’s response was deemed credible by 61 percent of Democrats, but the issue revealed generational and gender lines: Younger Democrats, at 53 percent, were 14 percentage points less likely than their elders to consider Biden’s answer credible and Democratic men (68 percent) were 12 points more likely than Democratic women to believe Biden.

The poll, which surveyed 1,991 registered voters, has a 2-point margin of error.

While Reade’s allegation that Biden sexually assaulted her when she worked in his congressional office during the 1990s has put the former Delaware senator under the microscope, Trump faces over two dozen allegations of sexual misconduct, including an allegation of rape that emerged last year by the writer E. Jean Carroll but fell largely on deaf ears.

Reade has not spoken on camera about her allegation, but is looking to do so.

“I’m digesting and processing everything he said,” she told The Wall Street Journal. “I will respond.”

The latest Morning Consult/Politico poll found 28 percent of voters had heard “a lot” about Reade’s allegations, compared with 33 percent who said the same in the first survey conducted after Blasey Ford detailed her allegations against Kavanaugh. Both of those surveys had a 2-point margin of error.

Thirty-six percent reported hearing “some” about Reade’s charges. Among Democrats, 62 percent had heard at least some about the allegations, compared with 69 percent of Republicans and 59 percent of independents.

Voters’ views about political consequences for politicians who are facing credible accusations of sexual misconduct have shifted since that December 2017 poll, when allegations against Franken, Conyers and Alabama Republican Senate candidate Roy Moore moved the ongoing #MeToo discussion into the political arena. 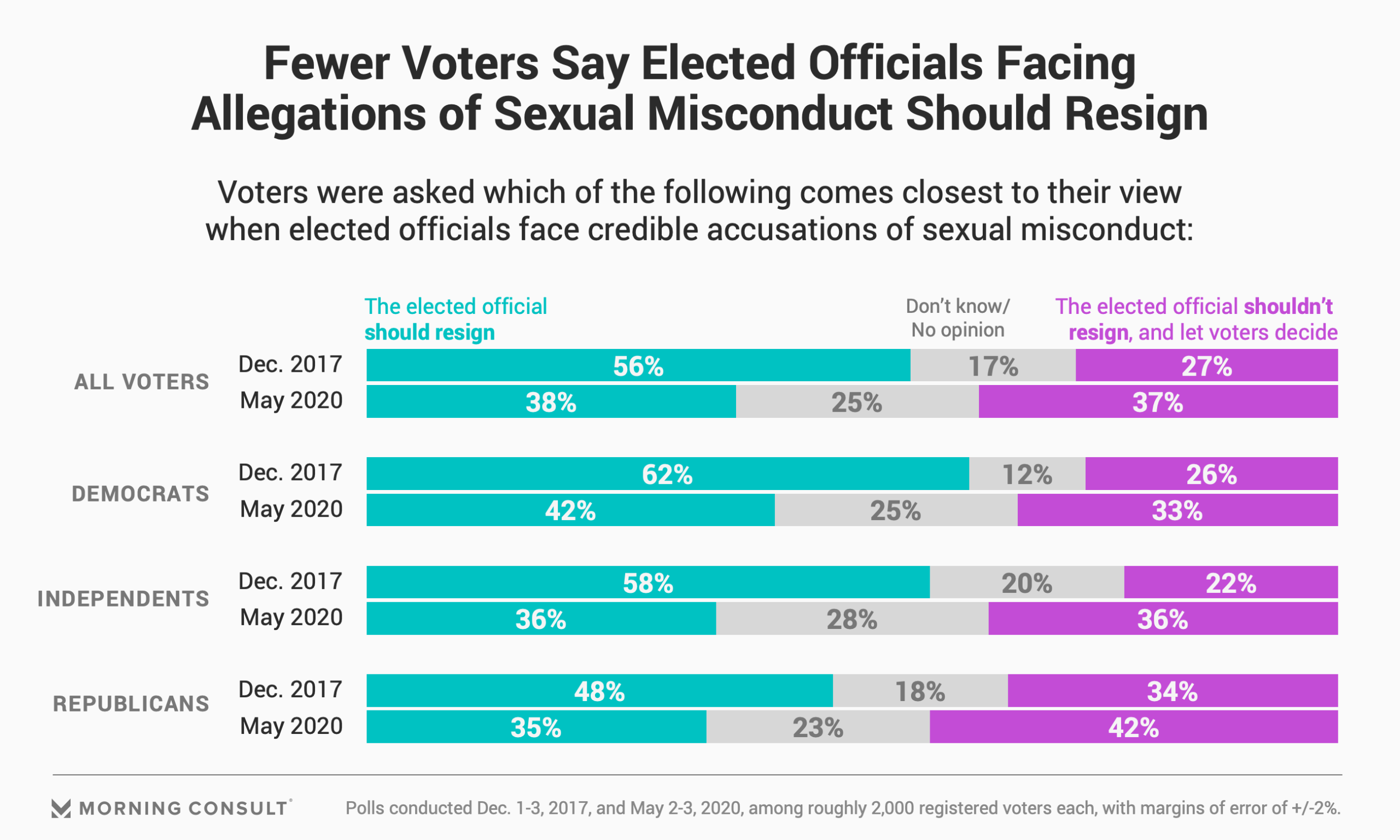 Since the poll conducted that month, the share of voters who said a politician should resign in the face of credible allegations has dropped 18 points, while the share who said the decision should be made at the ballot box increased 10 points. (Respondents were shown this question before viewing the MSNBC clip.)

While most Democrats and independents in 2017 agreed that the elected official should resign, independents are now evenly split and only a plurality of Democrats still hold that view. And while nearly half of Republicans used to back resignation for such officials, a plurality now says the voters should decide the politician’s future.

Among the overall electorate, a separate Morning Consult poll tracking the 2020 presidential race, conducted April 27-May 3, found Biden’s standing unchanged in a head-to-head matchup against Trump, with 46 percent supporting him and 42 percent supporting the incumbent.

This story has been updated to include additional polling data.