A plurality of voters, including 36 percent of Republicans, said the funds have been distributed unfairly

WASHINGTON, DC - APRIL 28: U.S. President Donald Trump and his daughter Ivanka listen as U.S .Treasury Secretary Steven Mnuchin speaks during an event on supporting small businesses through the Paycheck Protection Program in the East Room of the White House April 28, 2020 in Washington, DC. An total of $659 billion has been allocated for small business loans in coronavirus relief bills passed by Congress. (Photo by Win McNamee/Getty Images)
By Claire Williams

Banks and businesses have rushed to grab a piece of the Small Business Administration’s Paycheck Protection Program set up to provide coronavirus-related financial assistance, including several publicly traded companies

Some of those larger businesses have since returned their funding under pressure, but new polling shows that a plurality of voters still think the loans from the program have been awarded unfairly.

The small-business lending program has been criticized by both sides of the aisle for allocating funds to publicly traded companies and large restaurant and hotel chains instead of mom-and-pop shops, and Treasury Secretary Steven Mnuchin has asked that those big companies return the money. As of May 1, $175.7 billion in loans have been approved in the second round of funding, and the average loan size has decreased compared to what was doled out in the $349 billion first round, suggesting that money may be going to smaller businesses.

Voters, however, still believe that the small-business loans have gone unjustifiably to large, publicly traded companies. 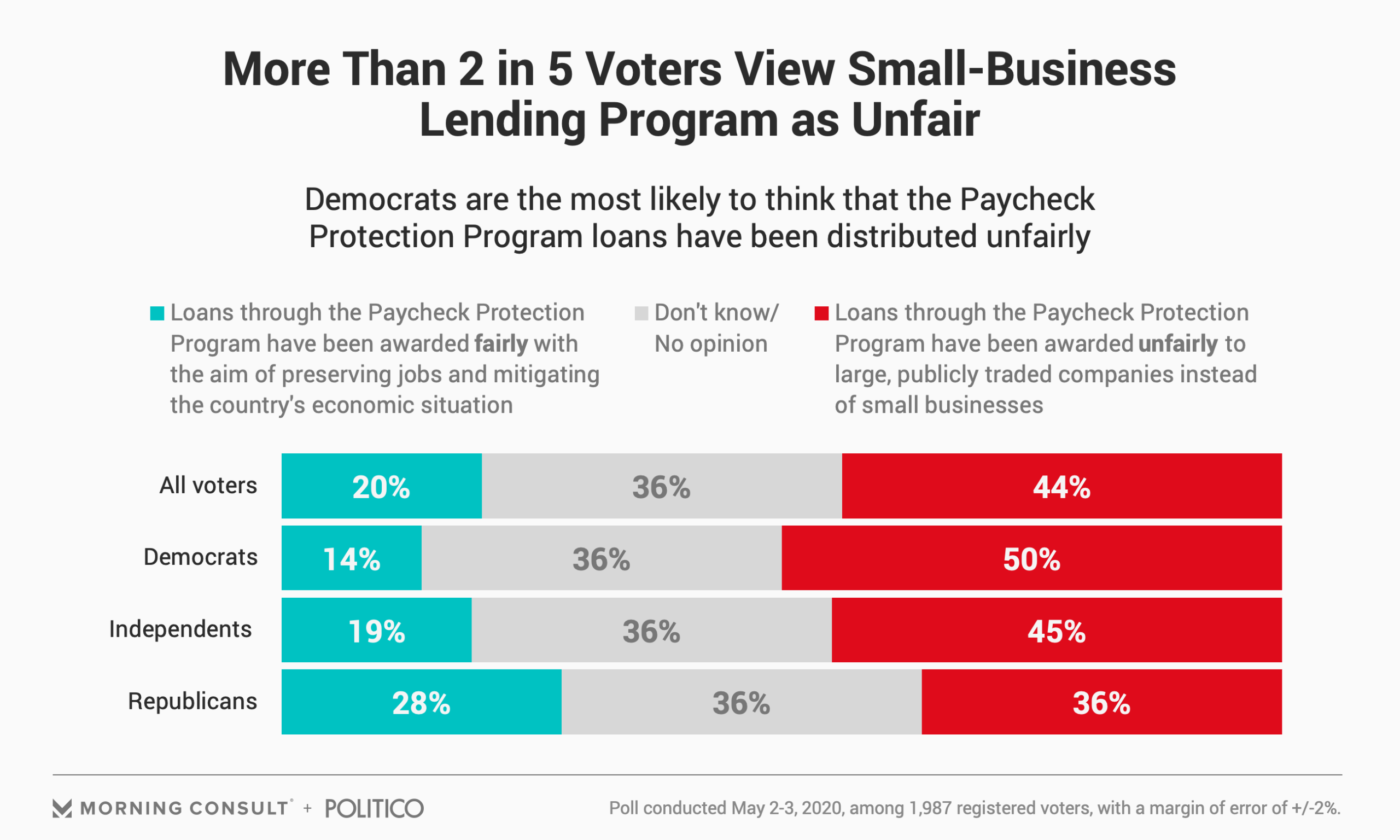 Forty-four percent of registered voters surveyed in the Morning Consult/Politico poll said the loans have been awarded unfairly, while 20 percent said that the loans have been distributed fairly with the intent of preserving jobs and mitigating the country’s economic situation.

The survey was conducted May 2-3 among 1,987 registered voters and has a margin of error of 2 percentage points.

Democrats were the most likely to say that the loans are being given out unfairly at 50 percent, followed by independents at 45 percent. Republicans were the least likely to think of the lending program as unfair (at 36 percent), but still chose that option at a wide margin over thinking the loans were fair at 28 percent.

For President Donald Trump’s re-election efforts, there’s still room for either party to sway voters’ opinions on the small-business lending program and on the government’s economic response to the coronavirus pandemic overall, said David McIntosh, president of the conservative Club for Growth and a former congressman from Indiana.

A lot of that uncertainty could be impacted by how the economy recovers — and how the Trump administration and Democrats frame that recovery, McIntosh said.

“Are people going to think it’s better than April or May when the economy tanked? Or is it compared to a year ago when I had a job, my kids had a job and I didn’t have to worry about that and now we’re struggling to get back to where we were?” he said. “That baseline, I think, will determine the election.”

In particular, voters were critical of publicly traded companies in the small-business lending program.

Forty-four percent of voters said publicly traded companies that spent their cash on hand before the coronavirus pandemic in order to return profits to investors should have saved that money and shouldn’t be eligible for governmental financial support. Nineteen percent said that those companies should still be able to receive the loans, and 38 percent didn’t know or had no opinion.

The spread is smaller among parties on the government funding question compared to the responses on the overall fairness of the program. Forty-six percent of Democrats said the publicly traded companies shouldn’t be eligible for the loans, compared to 41 percent of Republicans and 45 percent of independents.