Fitness Fanatics Are Eager to Work Out Again. Here’s What Gyms Can Do to Make Them Feel Safe. 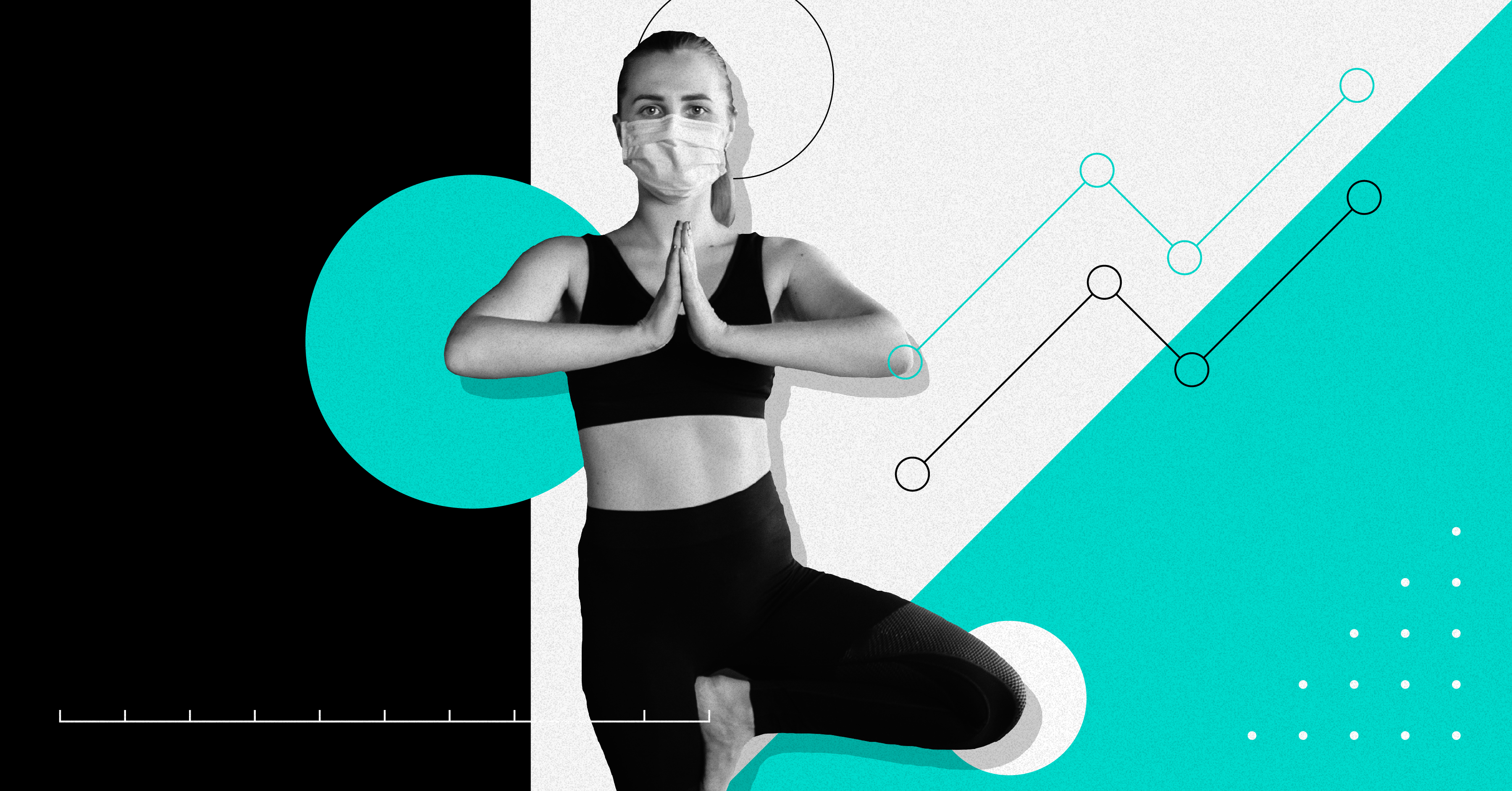 Sixty-seven percent of U.S. adults who belonged to a gym pre-pandemic said they would feel more comfortable at a gym with more hand sanitizer dispensers. (Getty Images / Morning Consult Illustration by Tadiana Martinez.)
By Alyssa Meyers

Gym rats across the country are itching to head back to the gym, according to new public opinion polling, while fitness brands strapped for cash after months of lockdown are just as eager to let them back in. As more states begin to lift stay-at-home restrictions, gyms and workout studios face a unique obstacle of making patrons feel safe in a space where sweating, swapping weights and shared locker rooms is the norm.

“People are looking to get back into a routine, and we want to be a part of that,” said Chad Waetzig, executive vice president of marketing and branding at Crunch Fitness. “But we know it’s not going to be business as usual.”

When Crunch reopened in Georgia, for instance, group fitness classes were initially unavailable — and still were a week later. Locker-room showers will be temporarily off limits at some of the chain’s locations, as determined by local guidelines and individual franchisees.

Members of Crunch and other gyms around the country might also notice signage reminding them to stay six feet away from one another, less cardio equipment on gym floors to ensure social distancing, more hand sanitizer dispensers and other coronavirus-related changes. 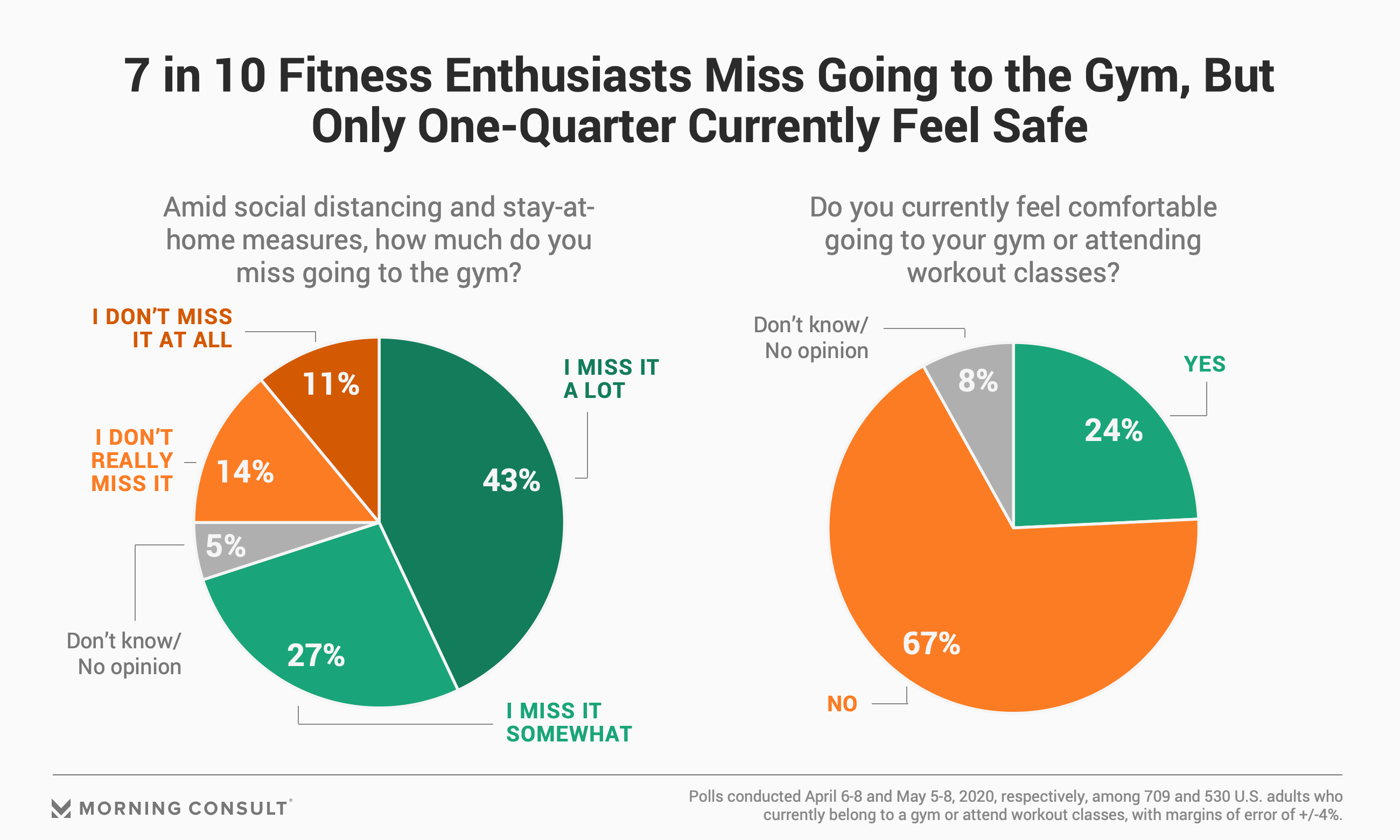 “What we do is sweaty and wet —  and you don’t know the people around you,” said Maggi Muirhead, the chief executive officer of the Boston-area fitness studio Turnstyle Cycle and Bootcamp. “I definitely think there will be some hesitation to come back in because people are scared, but we’re also getting a lot of people saying they can’t wait to come back.”

Among those who worked out at gyms prior to the pandemic, 70 percent said they miss doing so, and 72 percent said they plan to go to the gym the same amount or more once they’re given the green light, according to a recent Morning Consult report. Eighty-six percent of respondents who belong to a gym said their location has closed due to the pandemic, per a new Morning Consult poll.

The latest survey was conducted May 5-8 among 530 U.S. adults who currently belong to a gym or attend workout classes, with a margin of error of 4 percentage points.

Related: As Some Spaces Reopen, Consumers’ Uncertainty of Doing Some Activities Is Shrinking

But fitness buffs also expressed concerns for their health and safety, and only 24 percent said they feel comfortable going to the gym right now. However, they also said gyms can take steps to ease these worries.

Sixty percent of gym members said they would feel safer in smaller fitness classes, for instance, the same share that said they would like to see group fitness spaces redesigned to encourage social distancing.

More than half of respondents said they would feel more comfortable signing up for a workout class if it required minimal equipment.

Adding features such as hand sanitizer dispensers and signs reminding patrons to practice social distancing could also alleviate some concerns about returning to gyms. Sixty-seven percent of respondents said they would feel more comfortable at a gym with more hand sanitizer dispensers, and 52 percent said they would appreciate additional signage about social distancing. 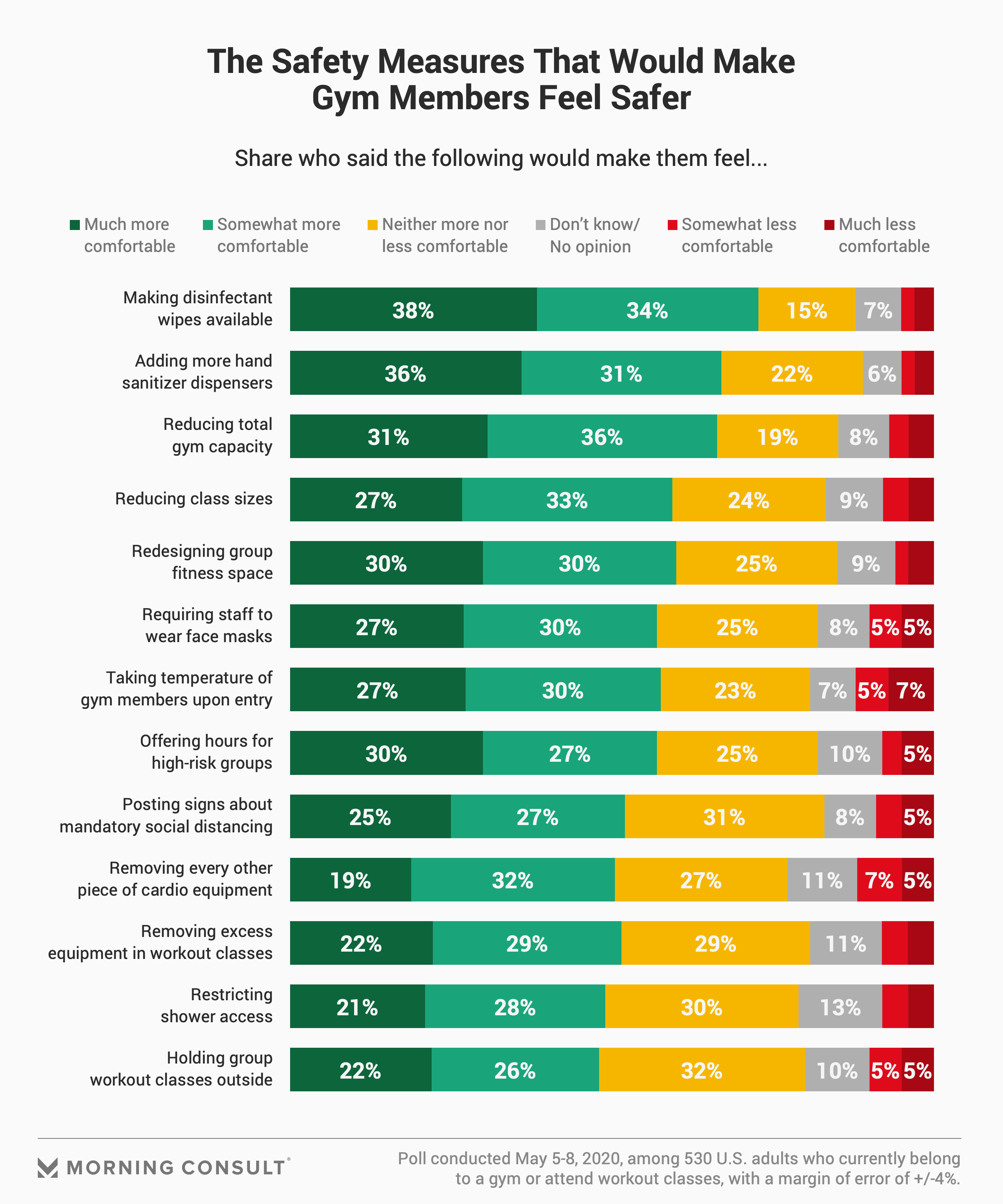 With many gyms closed, Crunch has frozen all membership payments and kept its digital workout offerings available for free, leaving the company with no revenue from closed locations for the time being, Waetzig said. As a result, all club-level staff members and much of the corporate office have been furloughed.

Still, the company with more than 300 locations plans to take its time reopening, working with clubs and franchise partners on operational standards on a case-by-case basis. In Georgia, where large parts of the economy reopened April 24, Crunch waited until May 1 to reopen its Athens and Atlanta locations to make sure everything was properly cleaned and disinfected, Waetzig said.

Some other national fitness brands have also decided to reopen slowly.

“As we look at the states that come online first, I wouldn’t be surprised if we weren’t the first company to open, even in the fitness space,” Seth Solomons, chief marketing officer for Equinox, said during a virtual conversation April 29 about telefitness hosted by Adweek. “We’re going to make sure we make the right decision for our members and our employees.”

Solomons said that the 100-plus full-service club chain will institute safety measures such as limiting capacity during the initial phase of reopening, and is also looking into the viability of taking people’s temperatures before they enter the gym.

Both options could prove to be popular among gym patrons: Sixty-seven percent of respondents said reducing the number of people allowed in a gym at once would make them feel more comfortable, and 57 percent said the same of temperature checks.

Blink Fitness, which has paused billing for its more than 100 gyms across the country, is planning to review requirements for reopening from state and local governments as they become available, but does not have any official dates in mind as to when it might reopen any of its locations, Chief Executive Todd Magazine said in an email.

In the meantime, Blink has been reviewing guidance from the Centers for Disease Control and Prevention in order to create a plan for reopening.

“As part of this plan we are considering ways to ensure social distancing within our gyms, including operating facilities at reduced capacity and making select equipment unavailable for use in the short-term,” Magazine said.

Roughly half (51 percent) of gym patrons said removing every other piece of cardio equipment would make them feel more comfortable in fitness studios.

While many are taking a wait-and-see approach, some local fitness brands are more eager to restart classes, and feel confident in their ability to do so safely.

In Boston, eight local boutique fitness studios have signed a petition to be considered for reopening with the first wave of businesses in the state, according to Jess Fracalossi, founder of indoor cycling chain The Handle Bar, who came up with the idea to appeal to state leaders such as those in the Massachusetts Executive Office of Housing and Economic Development.

Fracalossi said she does not yet know if Massachusetts gyms will be allowed to reopen with the first wave of non-essential businesses on May 18, but drafted the petition alongside Mark Partin, the co-founder of B/Spoke, another indoor cycling studio, to highlight the difference between traditional gyms and boutique studios that offer classes only. Collectively, the two run seven studios in the state.

“We want to make it really clear just how meticulous a boutique fitness studio can be because of how our business traffic flows,” Fracalossi said. “The biggest difference between us and a gym is that we know exactly how many people are going to be in the studio at a given time because they book in advance.”

The Handle Bar plans to reduce its capacity by half, down from roughly 40 per class to no more than 18 people in the facility at once, in order to keep bikes six feet apart, Fracalossi said. The studio will also space its class times out in order to avoid overlap between sessions.

But Fracalossi said she hopes to be able to lift these precautions as soon as possible, as half-capacity classes mean half the revenue.

“Without lowering wages pretty significantly across the board, it’s not a sustainable model,” Fracalossi said.

Turnstyle is selling apparel online, renting its stationary bikes out for $400 a month, and although it put a freeze on membership fees, it asked members to consider unpausing their payments even with gyms still closed. About 50 percent of Turnstyle members agreed to continue paying, Muirhead said, but she still worries she might have to implement cost-cutting measures such as staff reductions if Turnstyle can’t reopen soon or stays at half capacity for too long.

Dr. Tista Ghosh, the senior medical director and epidemiologist for the health care company Grand Rounds, said gyms — especially larger ones — are among the more difficult businesses to reopen safely because touching shared surfaces such as gym equipment can encourage the spread of the coronavirus.

“As far as we know so far, sweat does not spread the virus, but touching does,” said Ghosh, who formerly served as Colorado’s chief medical officer and as a member of the CDC’s preventive services task force. “It can even happen when you’re exhaling in close contact with somebody or talking — and it can land on surfaces.”

The coronavirus can live up to three days on surfaces, becoming progressively less infectious with time, Ghosh said, so she advised gyms to be particularly rigorous about cleaning shared equipment between every use.

This task does not necessarily have to fall to gym staff alone, as 72 percent of respondents said they would feel safer heading back to the gym if cleaning materials like disinfectant sprays or wipes were made available to patrons as well as staff, the most popular measure in the survey.

Ghosh also said that large gyms can take a cue from boutique studios and consider having members register for time slots to work out in order to limit the amount of people that come in at once.

Some gym owners might also require members to prove that they’re symptom-free in order to enter, although Ghosh warned that measures such as fever screenings are not reliable on their own, as fewer people than originally thought show fever as a symptom.

Good airflow also helps reduce the spread of the virus, Ghosh said, so gym owners should check their HVAC systems, and as the weather warms up, consider holding group fitness classes outside.

Gym owners and members should also make themselves aware of local statistics such as hospitalization rates related to the coronavirus before reopening, not just national or state-level updates, Ghosh said.

In addition to changing operations protocols when reopening, some gyms are also re-evaluating their messaging.

At Crunch, Waetzig said he and his team have been working on a reopening marketing campaign to reintroduce members to gyms post-pandemic, along with their new safety measures. That means a departure from Crunch’s “quirky, humorous and sometimes a little edgy” tone on social media, pivoting to a more serious and straightforward one — with a few exceptions.

“Folks are looking for a balance of thoughtful and responsible posts,” Waetzig said. “But we have to have a little fun within our four walls while we stay at home.”