New polling find that 46% of youth sports programs said they are in danger of permanently shuttering due to the impact of COVID-19. A child plays soccer at Cedar Creek Park on March 22, 2020 in Seaford, New York. (Al Bello/Getty Images)
By Alex Silverman

While the leaders of major professional sports leagues and players’ unions work to determine when they can return to action, youth sports programs are trying to figure out whether they’ll be coming back at all.

In a survey of 290 youth sports organizers from across the U.S. provided exclusively to Morning Consult by youth sports sponsorship platform LeagueSide, 46 percent of programs said they are in danger of permanently shuttering due to the impact of COVID-19. In addition, 38 percent of organizations said they have, at most, three months of runway remaining before they go under given their current circumstances. 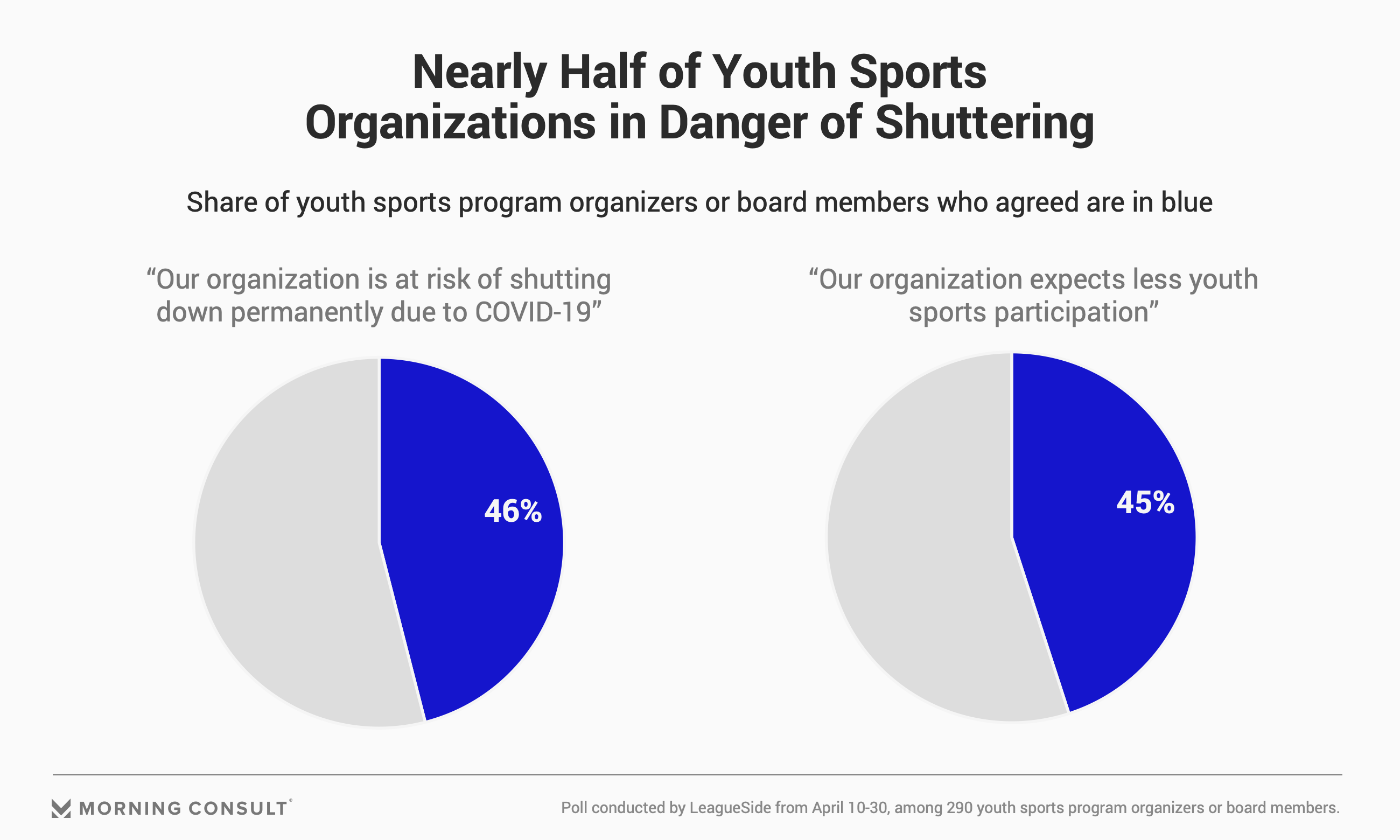 In the same vein, 54 percent of youth sports parents expressed concern that a program their children participate in could fold, according to a new Morning Consult poll.

The Christian Athletic Association, a 35-year-old, Maryland-based nonprofit that offers recreational soccer and volleyball leagues, is one community sports program facing an uncertain future amid the shutdown. Art Warshaw, who serves as president of the board, said the top priority is keeping CAA’s lone full-time employee on the payroll. 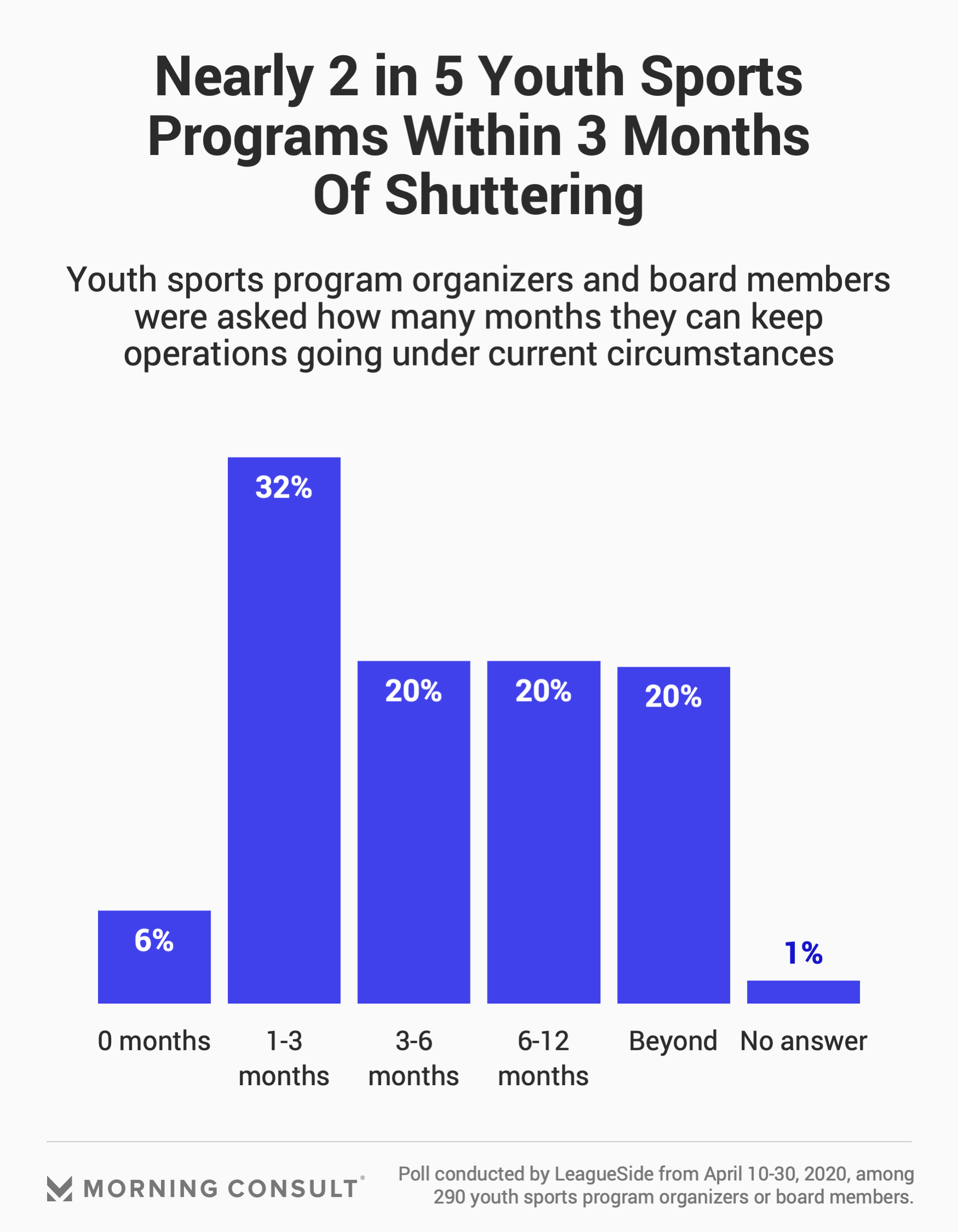 “We run on a very tight budget and each sport registration pays for the prior month’s expenses,” Warshaw said. “If this goes on for more than a few months, we face the high possibility of losing our only full-time employee, and he is the glue that holds our organization together.”

After negotiating the suspension of mortgage payments on the group’s facility through June, Warshaw said the organization has enough cash on hand to keep the lone staffer employed for six months, barring mass refund requests for the virus-shortened indoor soccer season.

In LeagueSide’s April 10-30 poll, more than half of organizers indicated that less than 10 percent of the parents with children enrolled in their programs have sought refunds for seasons that were cut short or scrapped entirely.

Beyond that, a significant number of parents exhibited a willingness to help youth sports programs weather the current financial crisis. Roughly half of sports parents in the Morning Consult survey expressed a willingness to pre-pay for future seasons in order to provide timely relief to organizers, and 58 percent said they are willing to pay more so that organizers can adopt new safety protocols in the wake of the pandemic.

Jennifer Pfeiffer, executive director of the Alabama Soccer Association, pointed out that  restarting programs is much more complicated than just flipping a switch. The state chapter of US Youth Soccer, which oversees 65 clubs throughout Alabama, expects to take a staggered approach. 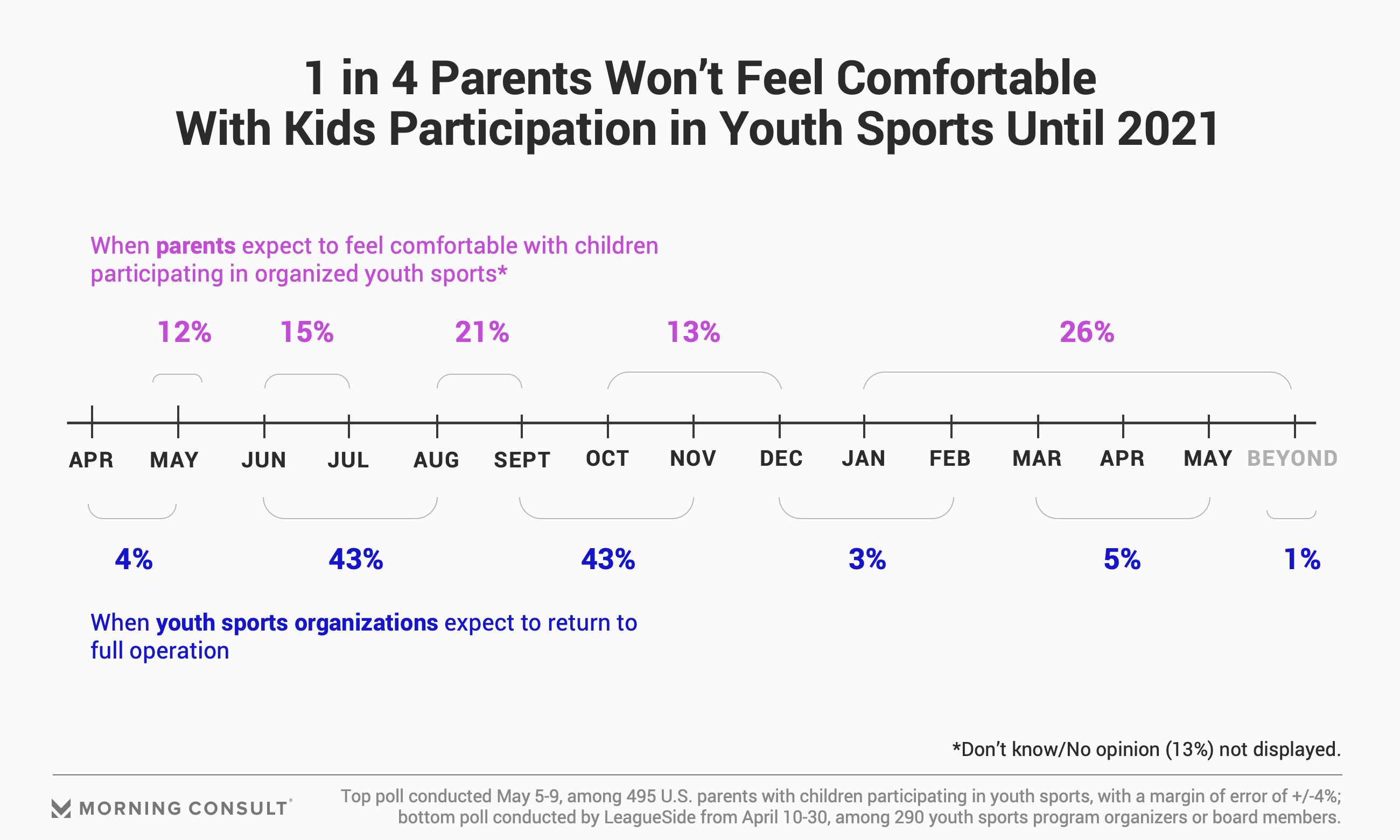 The state association and an unspecified number of youth soccer clubs in the Yellowhammer State have received financial support via the Paycheck Protection Program implemented in the most recent coronavirus stimulus package, but Pfeiffer said the clubs, which vary in size and resources, have been forced to cut their budgets by 20 percent to 60 percent.

From a health perspective, 27 percent of parents said they expect to be comfortable having their children participate in organized sports again by the end of July, with another 21 percent eyeing the back-to-school period in August or September. Roughly a quarter of parents, however, don’t expect to be comfortable with their kids playing sports until at least the start of 2021, with another 13 percent saying they don’t know when they’ll be ready. 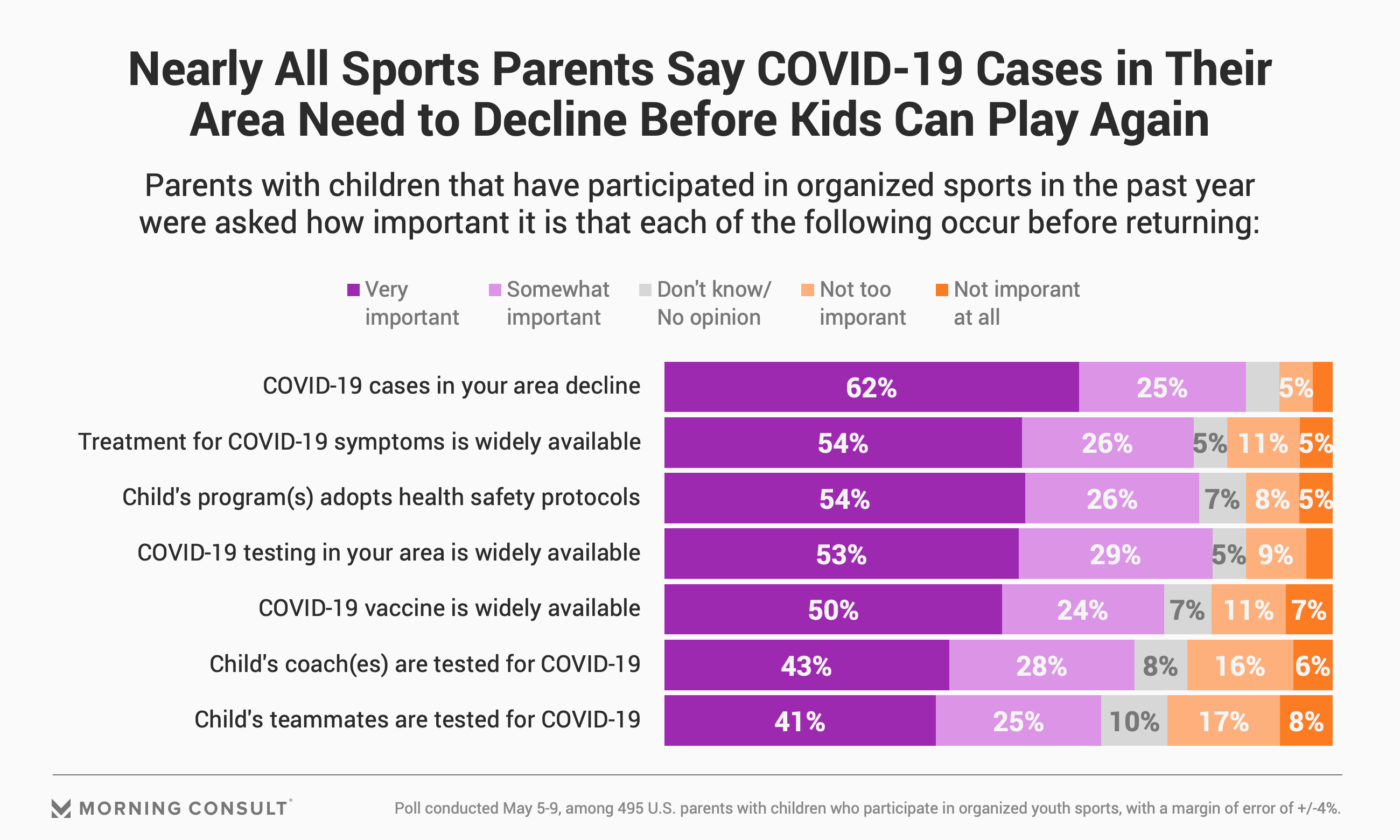 About 3 in 4 parents said it is important that a COVID-19 vaccine be made available before their children return to organized sports, including 50 percent who said a vaccine is “very important.” In addition, 34 percent of youth sports parents said they are less likely to allow their children to travel to other communities or regions for competitions.

In the wake of the economic downturn of 2008, regular participation in team sports among American youth fell from 45 percent that year to 38 percent in 2014, according to the Aspen Institute’s Project Play. That, of course, was without the health concerns facing parents today. 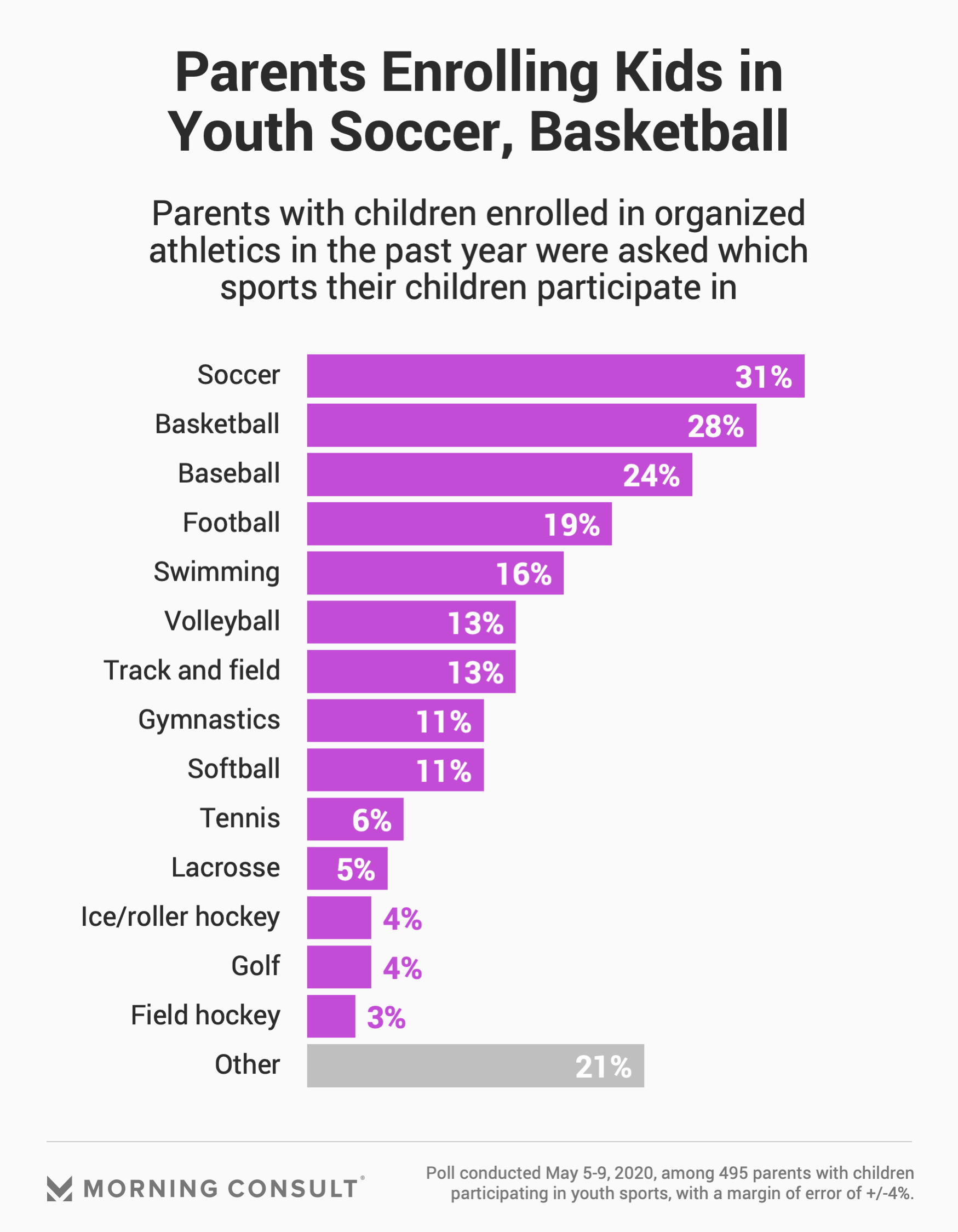 More than 80 percent of sports parents also indicated their kids have missed participating in organized athletics during the pandemic.

The Morning Consult poll of 2,200 U.S. adults, conducted from May 5-9, has a margin of error of 2 percentage points. The group of 495 parents whose children participate in youth sports has a 4-point margin of error.

Like many industries, the youth sports community is seeking aid from the federal government to stay afloat. Approximately 3,000 organizations have joined the Play Sports Coalition, which has asked Congress to allocate $8.5 billion for the establishment of a Youth Sports Economic Relief Fund. Thirty-one House members have signed on in support of the initiative, the coalition said, and a letter has been passed along to House and Senate leadership.

Jeremy Goldberg, president of sports team management software provider LeagueApps and a member of the coalition’s steering committee, said the request for funding to stabilize the youth sports infrastructure is the first step in the group’s broader vision. The long-term plan also includes efforts to reduce financial barriers to entry for parents who want to enroll their kids in sports programs.

“We want to make sure those organizations and programs are afloat, and that they’re able to safely return to play,” Goldberg said. “But we also want families to feel supported in their efforts to invest in how their kids are participating. We want to make that as easy as possible.”

The coalition also intends to offer guidance to organizations on how to most appropriately and effectively return to play, something that Goldberg said will vary greatly based on the community they operate in.

“No matter what, it feels like there’s going to be modified versions of play, as you want to minimize the kind of risks connected to this as we’re waiting for broader development of testing and vaccines,” he said.

Separately, LeagueSide has teamed with a nonprofit founded by former professional athletes, Athletes for CARE, to create a Save Youth Sports fund aimed at providing relief to athletic programs. The company, which has facilitated the sponsorship of thousands of youth sports leagues by companies such as Uber Technologies Inc., Comcast Corp. and Expedia Group’s HomeAway, is also encouraging businesses of all sizes to support youth sports programs through sponsorship.

Goldberg said one silver lining of the pandemic for the industry is an increase in parents’ level of appreciation for organized sports in their absence, something he hopes will help foster support moving forward.

“When you look beyond this COVID crisis,” he said, “I think you’re gonna see a bigger commitment than ever to make sure that as many kids as possible are playing sports.”