As COVID-19 Restrictions Ease, at Least 70% of Voters Would Support Same Moves to Mitigate Second Wave

More than 2 in 5 voters say U.S. would not be prepared to handle public health impact of another coronavirus wave

If a second wave of coronavirus cases occurs in the United States, 89 percent of voters say they would support quarantines of up to 14 days for people showing symptoms of COVID-19, and 84 percent support wearing face masks in public spaces such as grocery stores and parks. (Getty Images)
By Brian Yermal Jr.

After weeks of being mostly confined to their homes due to the coronavirus pandemic, Americans in many states are beginning to venture out in public again as governors ease stay-at-home orders and allow nonessential businesses to reopen.

As Memorial Day weekend — and the start of summer — approaches, people are likely to embrace their new freedoms, but public health experts have cautioned that lifting pandemic-related restrictions too early could result in a second wave of coronavirus cases later in the year that, in tandem with the influenza season, may be worse than the current scenario.

Despite protests of stay-at-home orders and other pandemic measures in recent weeks, Morning Consult data has shown that most of these measures have majority support. And even as many Americans are just now getting a slow return to normal, they are supportive of coronavirus measures being implemented again in the event of a second wave of cases, a new survey shows.

In a poll conducted May 12-15, 1,992 registered voters were asked whether they support a number of measures — including stay-at-home orders, closures of nonessential businesses, social distancing measures and 14-day quarantines for symptomatic people — that have been implemented to curb the spread of the coronavirus in the current pandemic, as well as in the event of a second wave of cases. 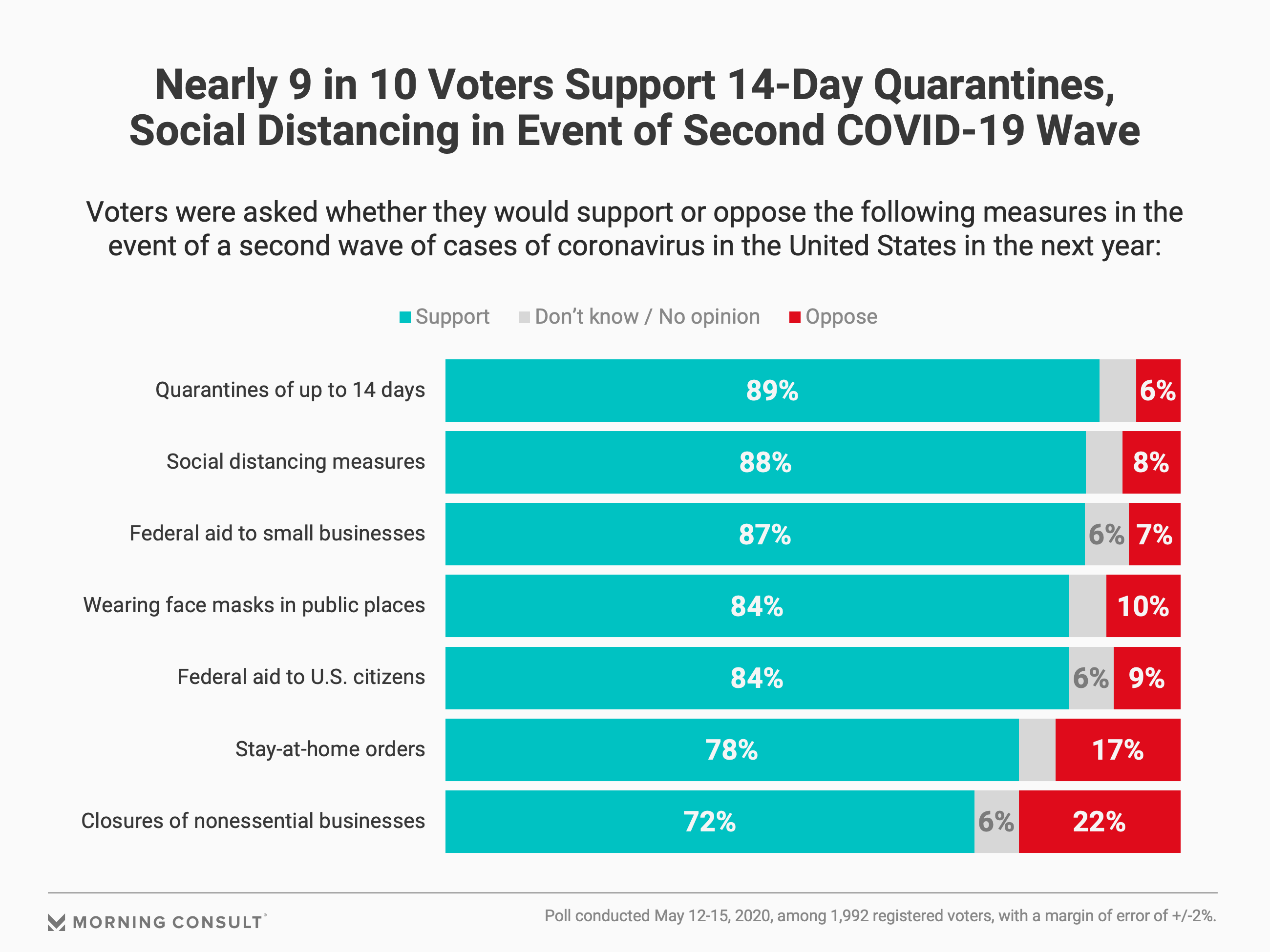 The survey found that at least 7 in 10 voters supported all these measures in the event of a second COVID-19, regardless of political affiliation, with voters most likely to support quarantines of up to 14 days for people showing symptoms of the coronavirus (89 percent) and social distancing measures that require people to stand 6 feet apart in public spaces (88 percent). Stay-at-home orders, which have been the subject of protests at state capitols across the country, received the support of nearly 4 in 5 voters, including 88 percent of Democrats, 75 percent of independents and 69 percent of Republicans. Less than one-fifth of the electorate was opposed to that course of action.

Related: Half of Voters Say U.S. Is Moving Too Quickly to Reopen Economy

The survey indicates that voters may be supporting these protection measures, despite current restrictions just beginning to ease, because of skepticism about the United States’ capacity to handle another bout of COVID-19. 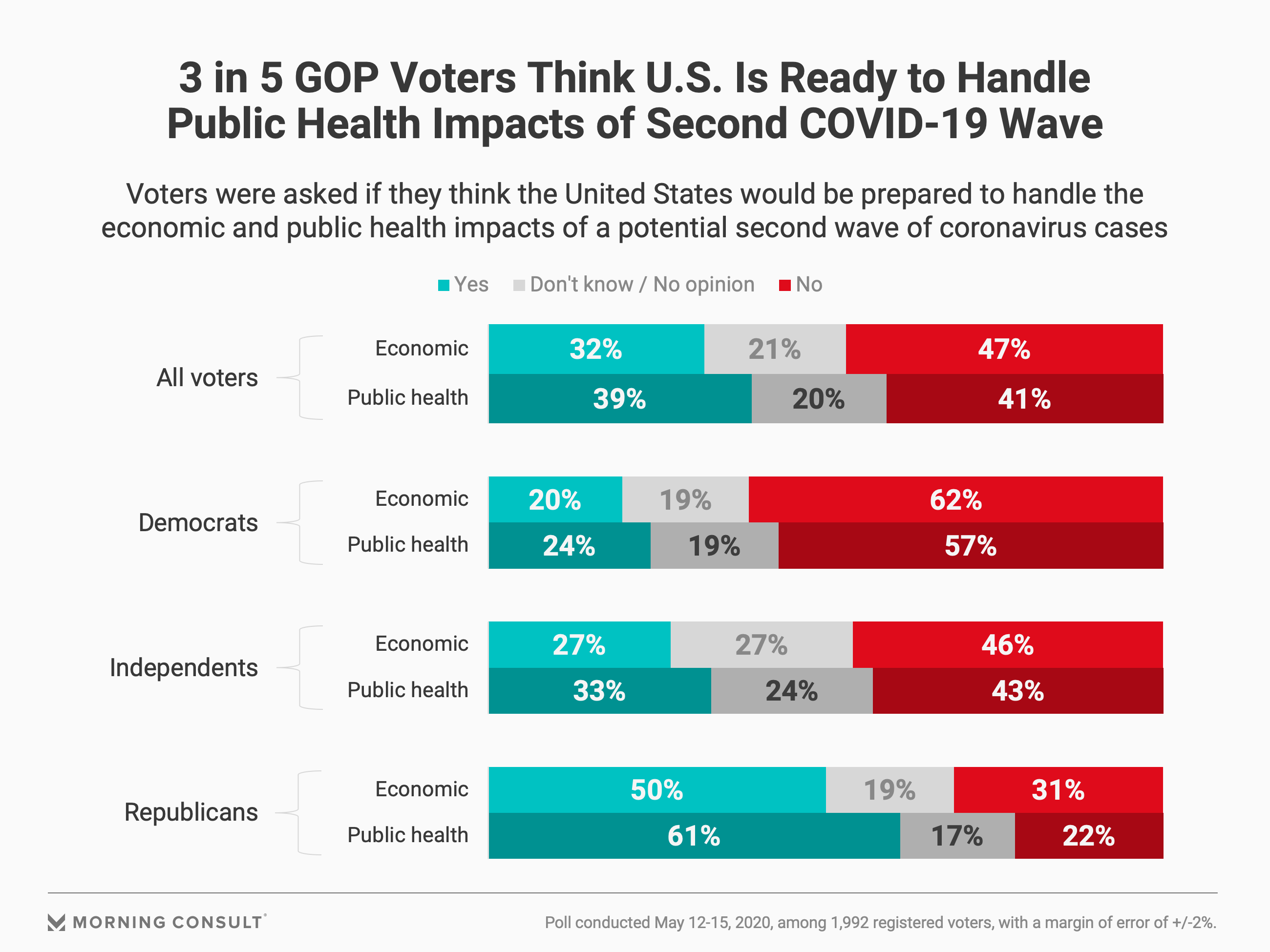 Likewise, about one-third of voters said the country would be prepared for a second wave’s hit to the economy, compared to 47 percent who said it would not. Again, GOP voters were more likely to say the United States would be prepared at 50 percent, versus 27 percent of independents and 20 percent of Democrats.