Burdened by pandemic-related workload, banks worry about discord between OCC, other regulators 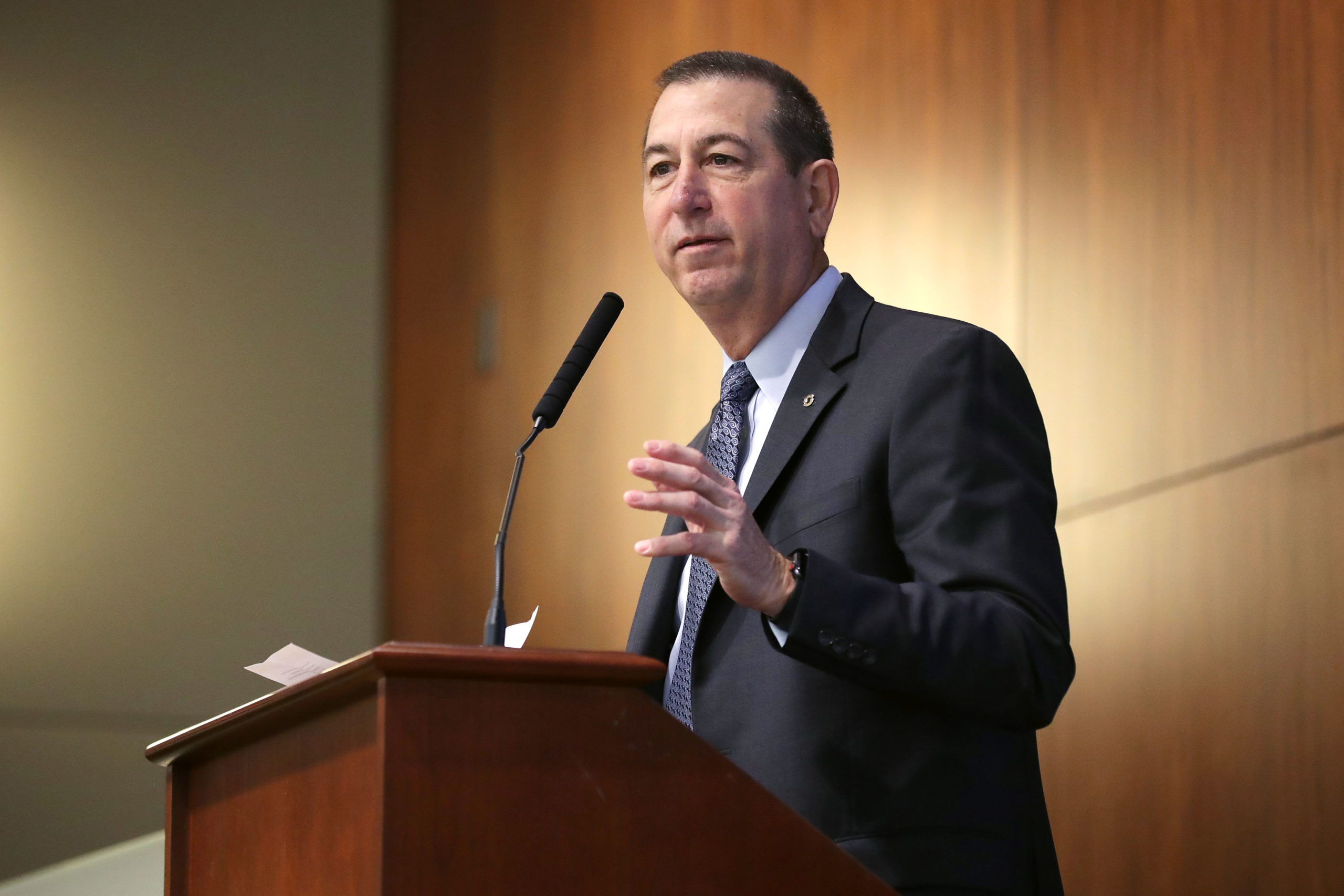 Comptroller of the Currency Joseph Otting addresses a conference at the Federal Deposit Insurance Corp. on April 24, 2019, in Arlington, Va. Amid reports that Otting is stepping down from his post at the OCC, he released a finalized rule overhauling the Community Reinvestment Act. (Chip Somodevilla/Getty Images)
By Claire Williams

Joseph Otting, head of the Office of the Comptroller of the Currency, released his revised rules for the Community Reinvestment Act on Wednesday morning, and bank officials say the changes couldn’t have come at a worse time.

Not only are banks already overburdened with helping clients amid the economic chaos caused by the coronavirus pandemic, they also point to the fact that the new rule was released without the backing of Federal Deposit Insurance Corp., which had joined the OCC in releasing proposed changes to the CRA in December. It’s confusing to have separate regulatory regimes among different banking agencies, according to interviews with nearly a dozen industry representatives.

With the OCC overseeing about 70 percent of activities under the anti-redlining rule and the FDIC and Federal Reserve responsible for banks making up the remaining 30 percent, Otting’s decision means banks could be subject to three separate regulatory regimes — a “regulatory bizarro world,” according to Ian Katz, director and financial policy analyst at Capital Alpha Partners in Washington, D.C.

“Regulated entities want regulatory consistency, and this is the opposite of that,” Katz said.

In one swoop, Otting released his revised rules for the Community Reinvestment Act on Wednesday morning amid news reports that say he plans to step down from his position. Afterward, during a media call about the overhaul, Otting was absent and OCC officials declined to answer questions about his reported departure; Chief Operating Officer Brian Brooks took questions in his stead.

The new rule has been revised since its initial release, which the OCC officials said took into account community group and industry comments.  But it still features one of the most substantial parts of the original proposal, which is to base a bank’s CRA evaluation on lending in low-income neighborhoods in areas where they have significant deposits, not just in those near their branches — a nod to the rise of digital banking.

There are some elements of the overhaul that industry experts view as wins: There won’t be specific numeric targets for what determines sufficient CRA activity until banks submit their own data, and community banks can opt out of the new regime at an asset threshold of $600 million, up from $500 million.

But according to 10 CRA officials, who all declined to be identified because they are not authorized to comment publicly about bank issues, and industry lobbyists, the FDIC’s absence from the rule poses a big problem for banks.

With Otting’s finalization of the CRA rules, the OCC is pursuing this overhaul alone for the time being. The Federal Reserve never signed on to the FDIC and OCC proposal in December, and FDIC Chairman Jelena McWilliams released a statement Wednesday saying that her agency “is not prepared to finalize the CRA proposal at this time.”

On the media call, Brooks said that the FDIC’s absence from the announcement would not be confusing for banks because banks know which agency’s CRA rules to follow, and that the phase-in period is multiple years. He also said the extended phase-in period for the rule means that implementing it shouldn’t interrupt activities during the coronavirus pandemic response.

The interagency disagreement would be an issue for banks under the best of circumstances, but it’s exacerbated by the economic stress caused by the coronavirus pandemic, the bank industry representatives said.

“It’s no surprise that banks don’t relish the prospect of starting on all that in the midst of a pandemic,” said Jesse Van Tol, chief executive of the National Community Reinvestment Coalition.

Bank resources are already stretched trying to manage the Small Business Administration’s Paycheck Protection Program and forbearance programs. The new CRA rules will require an overhaul of frameworks for reporting data, new technology to do so and resources to implement all these changes, the bank industry representatives said.

“There’s no reason why you have to rush the first major change in these rules in 25 years in the middle of a pandemic,” said Laurie Goodman, vice president at the Urban Institute and co-director of the nonpartisan think tank’s Housing Finance Policy Center. “The whole timing is very awkward.”

Otting, who has made CRA overhaul one of his top priorities throughout his tenure at the OCC, has said that the pandemic makes reform more timely.

“Over the months we have worked on this rule, many asked me, ‘Why now?’” Otting wrote in an editorial published Wednesday in American Banker. “The answer has always been because we can do more to support communities in need across the country. The coronavirus pandemic has only made it more dire that communities — particularly LMI [low- and moderate-income] neighborhoods — need more capital and better access to credit. And they need it now.”