House Sustainable Energy and Environment Coalition vice chair Rep. Donald McEachin (D-Va.), pictured at the March for Our Lives Rally on March 24, 2018, in Washington, D.C., said in a statement that it is the responsibility of Congressional leaders to “make sure we are making plans to build back better, more sustainably and more equitably” following the coronavirus pandemic. (Shannon Finney/Getty Images)
By Lisa Martine Jenkins

Setting their sights on a fifth coronavirus economic relief package, the leaders of the House sustainability coalition are drafting an outline of clean energy, infrastructure and other climate priorities to share with the chamber’s leadership.

Rep. A. Donald McEachin (D-Va.) said in a statement that the House Sustainable Energy and Environment Coalition “will continue to strongly advocate for clean energy policies that support workers and family-sustaining jobs, along with other sustainability policies that advance the cause of environmental justice and promote the development of sustainable infrastructure.”

McEachin, a vice chair of the coalition, confirmed that the group is staying in touch with House leadership, encouraging a “climate-smart” rebuild following the coronavirus pandemic “with the future in mind.” And according to McEachin spokesperson Ralph Jones, SEEC’s detailed outline of policy priorities will come in the form of a letter from the group’s eight leaders, with the goal of supporting a future recovery bill.

“As leaders, it is our responsibility to protect communities from COVID-19, especially low-income communities and communities of color impacted disproportionately by the virus; support working Americans; and make sure we are making plans to build back better, more sustainably and more equitably — all at the same time,” McEachin said.

SEEC’s in-progress letter comes as the House pushes its latest coronavirus pandemic relief package, the HEROES Act (H.R. 6800). The bill passed the chamber Friday, but Republican Sen. Lindsey Graham (S.C.) described the bill as “dead on arrival.” The bill did not contain the renewable energy tax credit provisions that SEEC and other Democrats have pushed for since the pandemic’s toll on the sector became clear in March.

But despite the fact that the arrival of the coronavirus in the United States has forced a reassessment of congressional priorities to focus on controlling its spread and economic impact, Morning Consult data shows that a majority of voters still think passing a bill to address climate change should be a “top” or “important” priority. 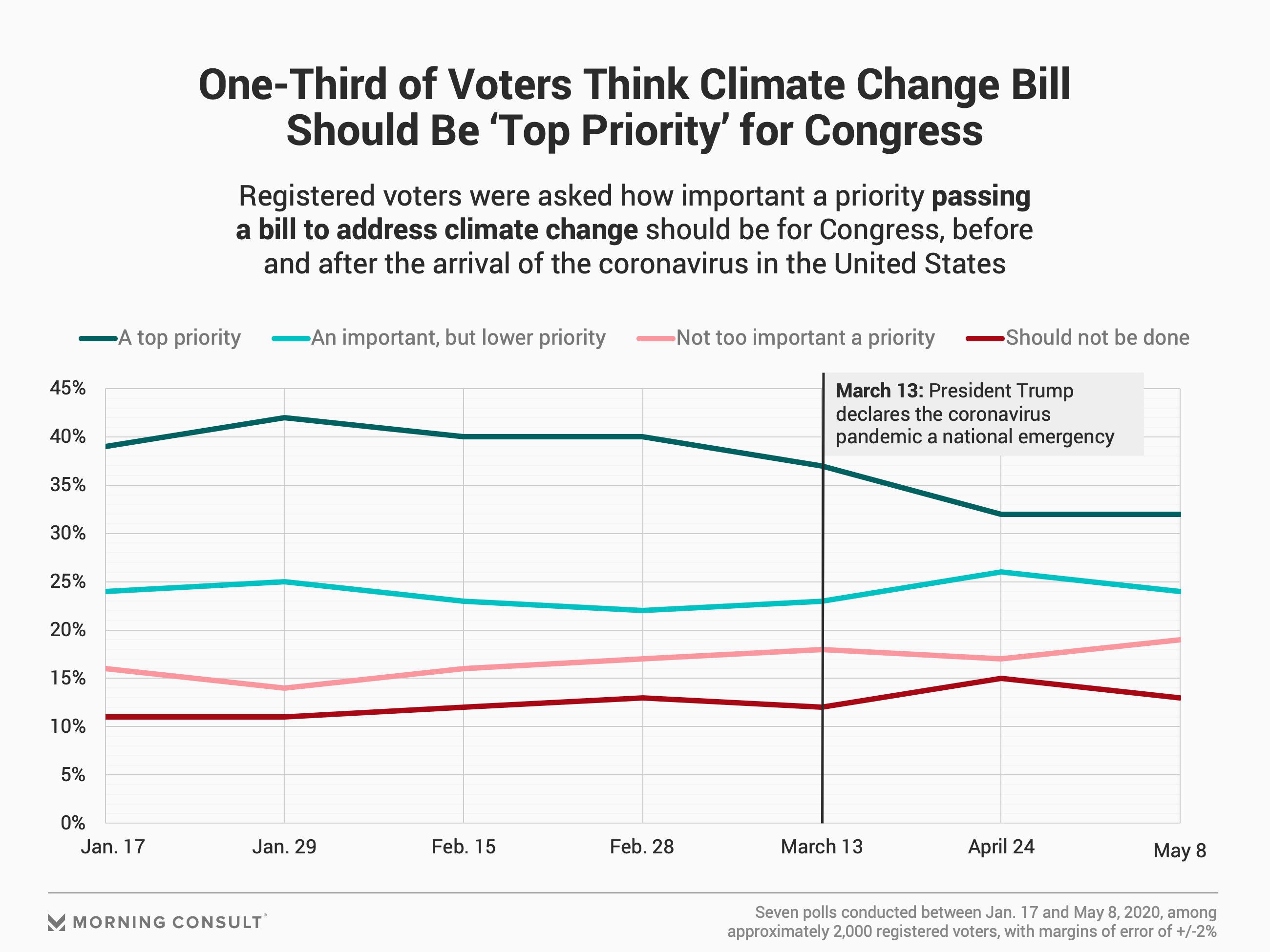 However, that number has dipped somewhat, from 63 percent in mid-January to 56 percent in early May. Support has declined mostly since March 13, the day President Donald Trump declared the pandemic a national emergency, resulting in a 4-point drop in the latest poll. The minority that says a climate change bill should not be a priority has remained steady, rising from 11 percent in January to 13 percent this month (which is within the margins of error for the polls).

The seven polls conducted between Jan. 17 and May 8 surveyed approximately 2,000 registered voters and have margins of error of 2 percentage points.

The recent dip is symptomatic of changing priorities as the impacts of the coronavirus pandemic intensify. In a May 8-10 Morning Consult/Politico poll, majorities of voters responded that measures to control the spread of the coronavirus and provide economic stimulus in its wake should be “top” priorities (73 and 67 percent, respectively). Addressing climate change was ranked fifth among the 12 priorities, coming in above such options as infrastructure spending, U.S.-Mexico border wall funding and regulating tech companies.

In total, 77 percent of Democrats and 33 percent of Republicans said passing a climate change bill should be a “top” or “important” priority, down from 83 and 43 percent in January, respectively.

While SEEC is not an explicitly Democratic coalition, at present none of its members are Republicans.