As Trump and Biden Spar Over China, Neither Has a Clear Edge With Voters on the Subject 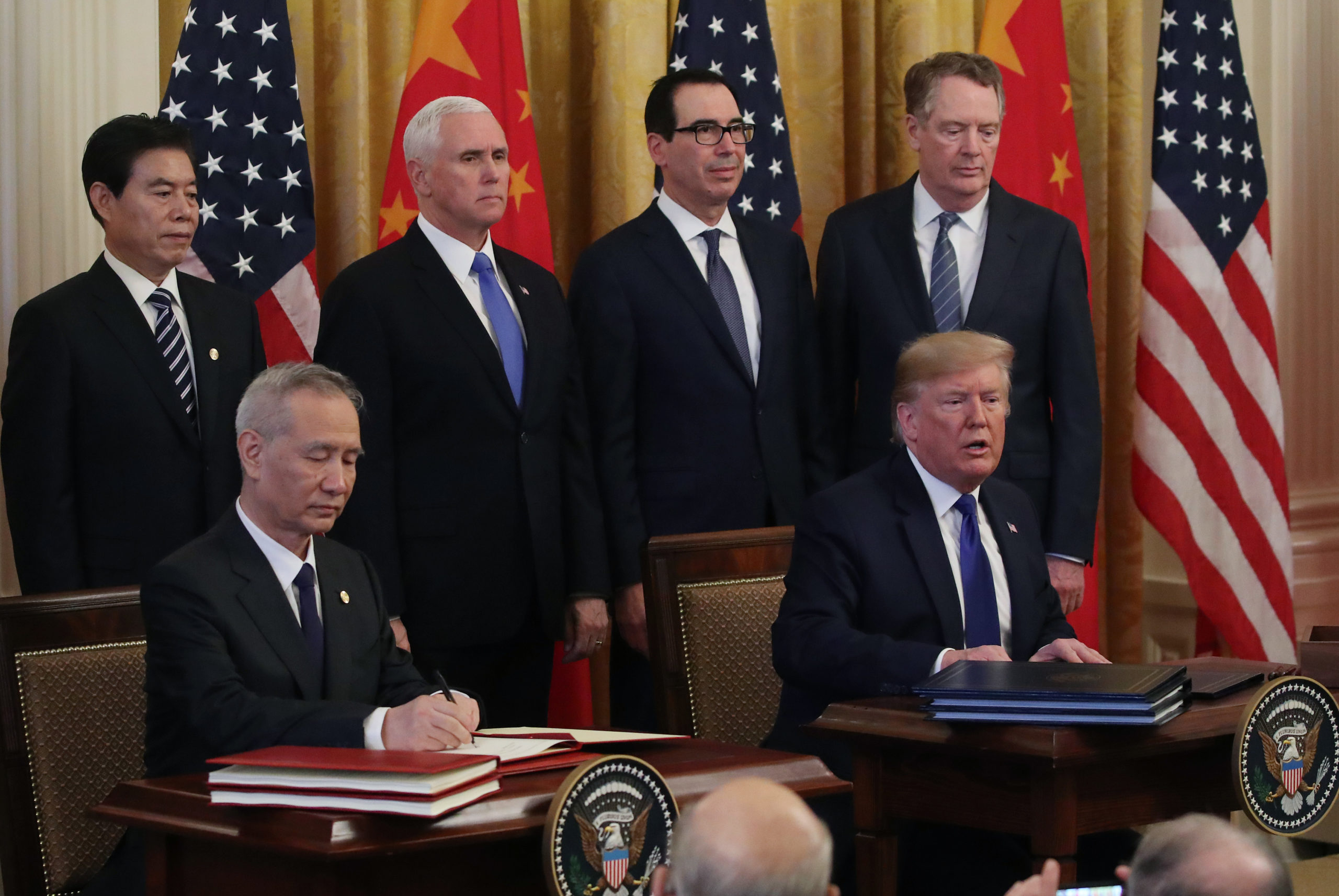 President Donald Trump and Chinese Vice Premier Liu He sign phase 1 of a trade deal between the U.S. and China on Jan. 15 at the White House. In recent weeks, the campaigns for Trump and his likely challenger, former Vice President Joe Biden, have each painted the other as weak on China, and new polling shows voters are split over whom they trust more to handle relations with the Asian superpower. (Mark Wilson/Getty Images)
By Eli Yokley

Former Vice President Joe Biden is “China’s puppet” and President Donald Trump “rolled over” for Beijing on the coronavirus, according to dueling messages circulated by their presidential campaigns in recent weeks.

The attacks, which in another time may have been aimed squarely at the white working class in manufacturing-heavy states, have the potential to capitalize on a wider swath of the country, one that holds China mostly responsible for the spread of COVID-19 in the United States but is split over which candidate it trusts more to handle relations with the Asian superpower.

According to a May 15-18 Morning Consult/Politico poll, conducted among 1,994 registered voters, 40 percent of the electorate trusts Biden to manage relations with China, while 38 percent trusts Trump. The gap is within the survey’s margin of error of 2 percentage points. 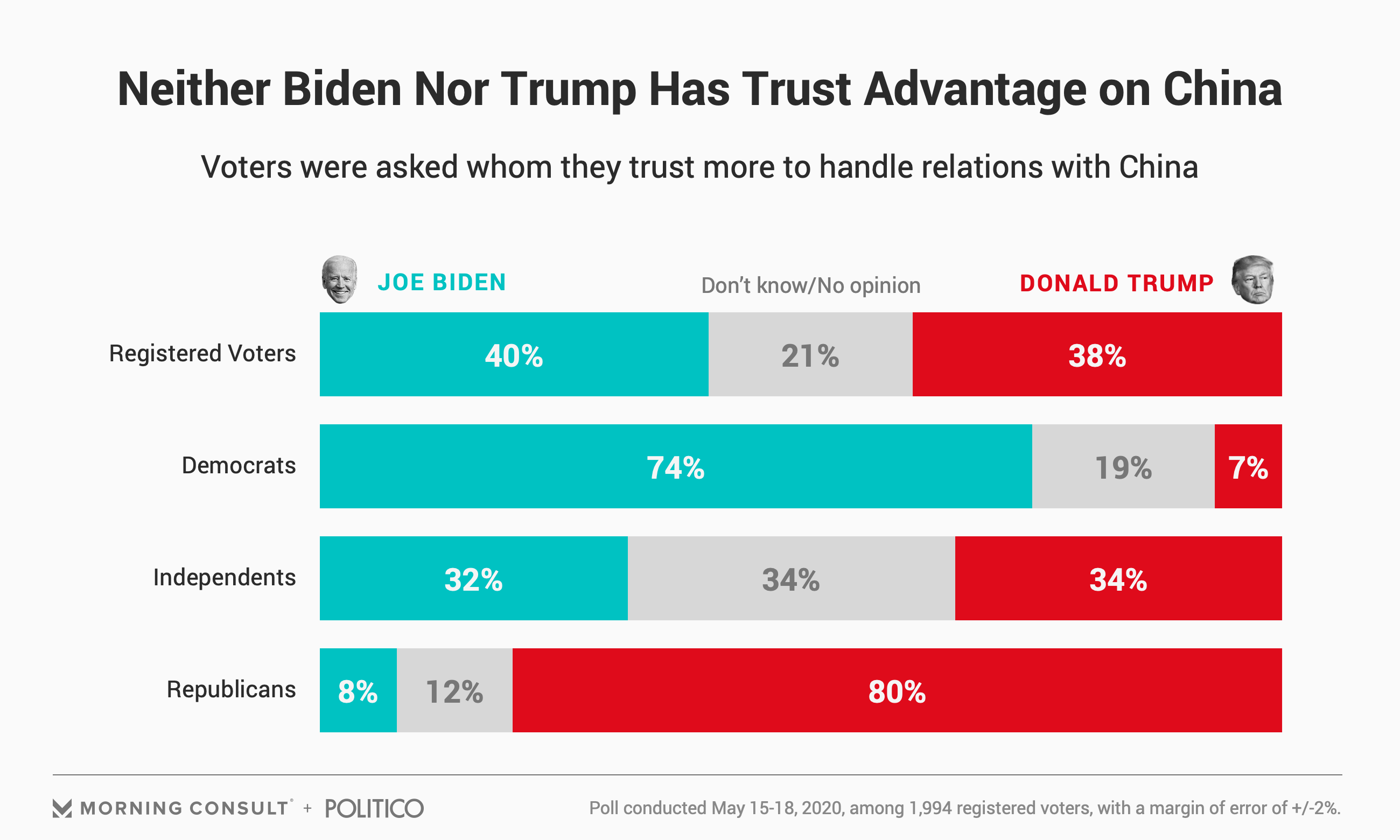 The finding comes as voters are increasingly taking an adversarial view of China, with the share who view the country as “unfriendly” or an “enemy” (61 percent) up 9 points since a January poll. That shift is driven by GOP voters, who are now twice as likely to view China as an enemy (47 percent) as they were at the beginning of the year (23 percent).

Trump, who took a hard line on China early in his presidency over trade practices before signing an initial trade deal with Chinese President Xi Jinping’s government in January, has sought to blame Beijing for the stateside spread of coronavirus despite initially praising the country’s response. The critiques have been echoed by his campaign apparatus, which dubbed Trump’s presumptive Democratic challenger, “Beijing Biden.”

Biden’s campaign and the Democratic organizations supporting it have used their China-themed attacks to make the case that Trump fumbled the initial coronavirus response — leaning into American sentiment against China but laying the blame at Trump’s feet, not Xi’s.

“He took their word for it,” one Biden online video says, noting Trump’s positive statements about China. “All the negative ads in the world can’t change the truth.”

The former vice president has begun to make gains on the issue of coronavirus, with 42 percent trusting him the most to handle COVID-19’s spread (up 4 points since mid-March), compared to 35 percent who trust the president (down 3 points). But that trust hasn’t translated to dramatic movement in Biden’s standing over Trump at this early stage in the contest: The latest Morning Consult poll tracking the race found him leading the president, 46 percent to 41 percent, fairly consistent with his average 4-point lead over the past two months. The head-to-head poll was conducted May 11-17 among 28,159 voters, with a 1-point margin of error.

Still, when it comes to who is mostly to blame for the damage the pandemic has wrought in the United States, the lion’s share of voters are inclined to follow the president’s lead. 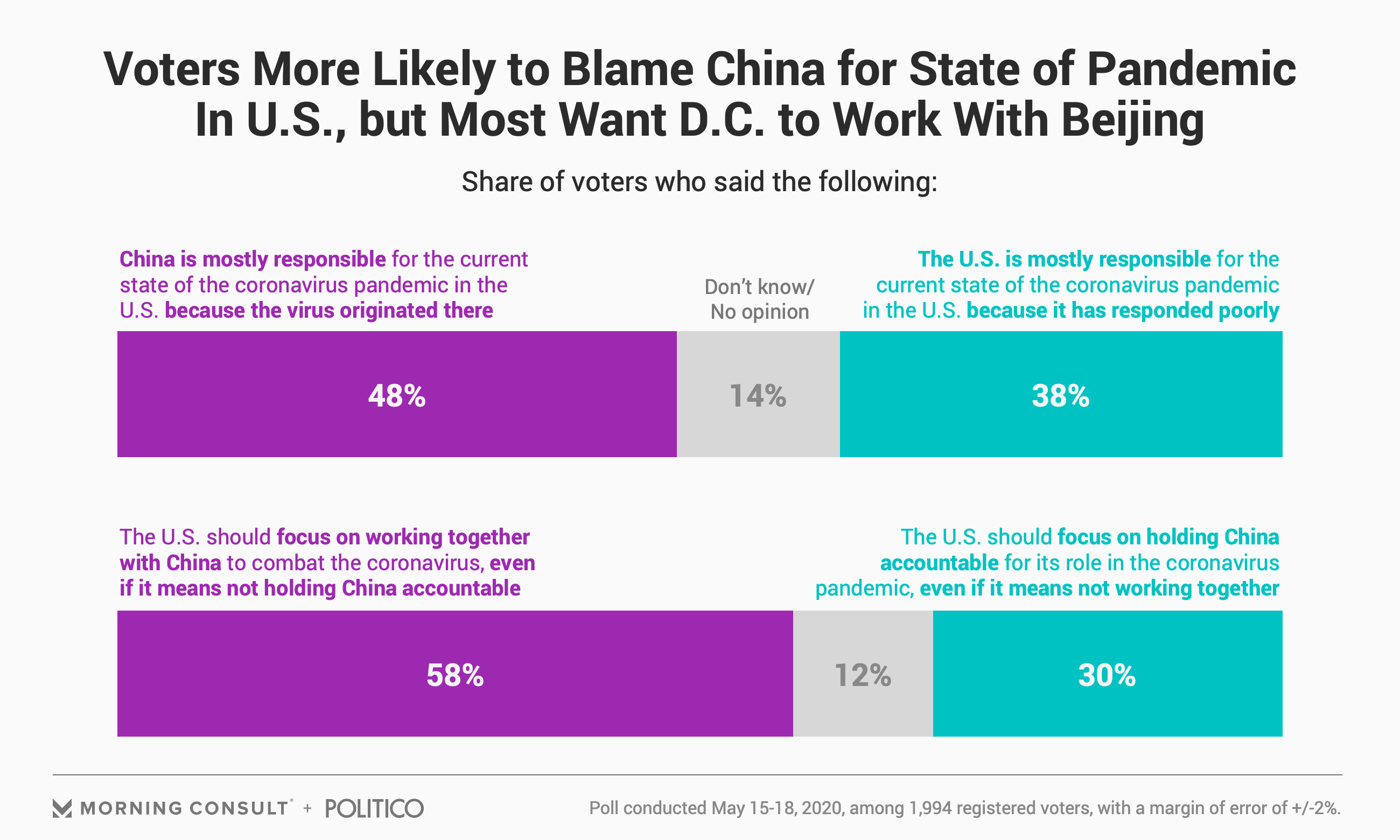 That 10-point gap mirrors Morning Consult trend data showing that voters are more likely to blame the Chinese government than the president for COVID-19 spread in the United States — figures that have remained stable since early April. (The latest coronavirus tracking poll, conducted May 15-17, found 36 percent blamed Beijing and 32 percent blamed Trump.)

The Trump administration has pressed to investigate China over the origins of the outbreak and the president himself has publicly raised the idea of confronting China over coronavirus, raising concern about scuttling cooperation on confronting the virus. The poll shows most Americans would rather cooperate with China than score revenge.

Fifty-eight percent of voters, including 39 percent of those who blame China for the current state of affairs, said the United States should focus on working together with China to combat the coronavirus, even if it means not holding China accountable for how it contributed.

Three in 10 voters, driven largely by 55 percent of Republicans, said the United States should focus on holding China accountable even if it means not working together to combat the virus.