Ahead of HBO Max Launch, Few Consumers Know What the Streaming Service Offers

As WarnerMedia prepares to launch its HBO Max streaming service, it’s banking on original content, hot library titles and a bevy of brands to attract a wide variety of consumers. But a new poll finds that prospective subscribers aren’t exactly sure what will be included with HBO Max — a fact experts say won’t hurt the nascent streaming service if it’s able to create buzzy original content like its competitors.

Despite ads showcasing a number of well-known movies and TV shows — including “Friends,” DC Comics films and “Game of Thrones” — that will be streaming on the service at its May 27 debut, overall viewer awareness about the availability of certain content is low.

A May 14-17 Morning Consult/The Hollywood Reporter poll asked 2,200 U.S. adults to select from a list of TV shows and movies which ones they believed would be available on HBO Max at its launch. Roughly a quarter of adults (24 percent) knew “Game of Thrones” would be part of the service, while 13 percent said the same of “Friends.” Twelve percent knew “The Big Bang Theory” and DC Extended Universe movies, such as “Wonder Woman” and “Aquaman,” would be included.

A respective 95 percent and 91 percent of respondents correctly declined to select Walt Disney Co.’s “The Mandalorian” and Netflix Inc.’s “Stranger Things” as shows that would stream on HBO Max.

According to data from TV advertising measurement company iSpot.tv, HBO Max’s media value, a measure of how much a brand’s advertising is worth, was $10 million from March 15 to May 15, compared to $49.4 million for Disney+ and $53.8 million for Hulu during that time.

Brett Sappington, vice president at Interpret, a global market research company specializing in the entertainment industry, said WarnerMedia is being forced to introduce itself — and its content — as it prepares for launch, a challenge not faced by established brands like Disney.

“When people hear ‘Disney’ or even hear ‘HBO,’ they know the content that’s available there,” he said, but consumers may not be aware of all of the WarnerMedia content — beyond HBO originals — that HBO Max will offer. Sappington said a significant part of the platform’s success will be raising consumer awareness of its offerings, as the company has been seeking to do in its advertising.

And engagement on social media — focused on “Friends” — has been up, according to HBO Max. The streaming service said it saw an increase in its Instagram followers of almost 300 percent in less than eight hours after the announcement of the reunion special, which will be exclusive to the platform. It also saw social media buzz about “Friends” increase as much as 91 percent throughout April compared to the beginning of March. 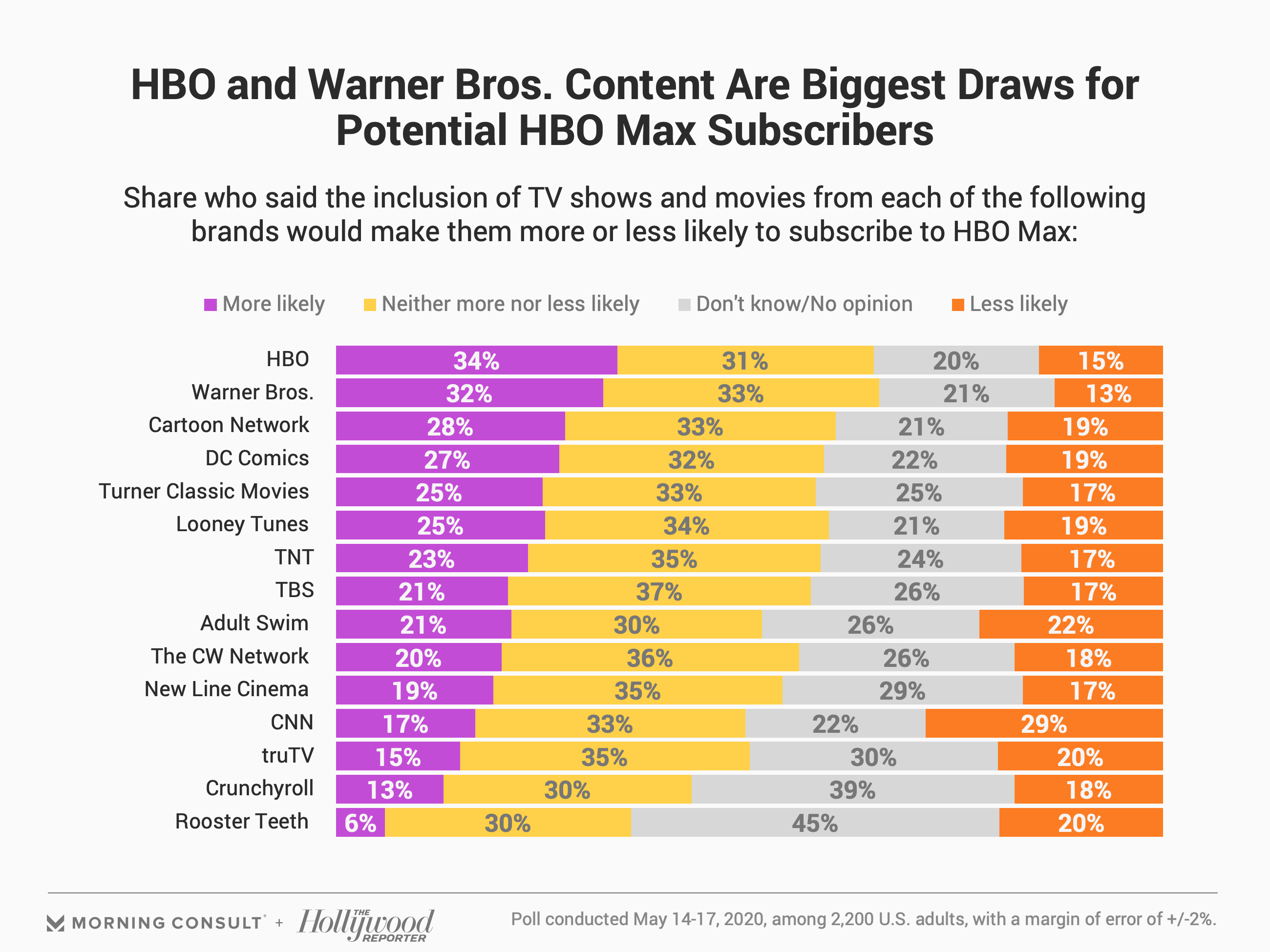 Thirty-four percent of respondents said HBO’s offerings would make them more likely to subscribe to HBO Max, while 27 percent said the same of content from DC Comics. Both catalogs will be included on the platform.

And though including content from a variety of brands may cast a wide net, Allen Adamson, a founder and managing partner of brand marketing firm Metaforce, cautions that this strategy may not define the service for consumers.

“It’s such a confusing streaming environment. It’s a recipe for massive consumer confusion,” he said.

Both Adamson and Sappington agreed that a marquee, tent-pole series similar to “The Mandalorian” or “Stranger Things” could help HBO Max find its footing. And consumers are eager for these originals: One in four respondents said they would be more likely to subscribe to HBO Max for its upcoming original TV shows. HBO Max will include six originals when it debuts, with more rolling out through the summer.

“HBO, because of its strong brand, will end up continuing to be a successful brand and they’ll do okay in streaming,” Adamson said. “But I don’t think it’s because of ‘Friends’ and other old movies. I think it’s gonna be because of the quality of what has always driven HBO.”