As Biden Courts Progressives, Campaign Enjoys Steady Lead on the Environment Among Voters

During the Democratic presidential primary, the unofficial title of “climate candidate” was typically reserved for Washington Gov. Jay Inslee followed by Sens. Elizabeth Warren (D-Mass.) and Bernie Sanders (I-Vt.), all of whom created policy plans with the help of progressive groups like the Sunrise Movement.

However, as the general election nears, former Vice President Joe Biden has worked toward integrating his own environmental vision with that of the more leftist wing of his party, even as President Donald Trump attacks him on his fossil fuel proposals.

Morning Consult data shows that so far voters have trusted Biden’s abilities on the environment more than the president’s. In a Morning Consult/Politico poll conducted May 15-18, Biden led Trump by 19 percentage points on the issue and has led by an average of 17.2 points since becoming the presumptive nominee in March. The former vice president also maintains a lead on energy, though a smaller edge of 7 points in the most recent poll.

“While Donald Trump has demonstrated he is not up to the challenge of leading during a crisis, voters know Joe Biden has the experience and vision to lead this country and the world when it comes to tackling the climate crisis,” Stef Feldman, the Biden campaign’s policy director, said of the findings. 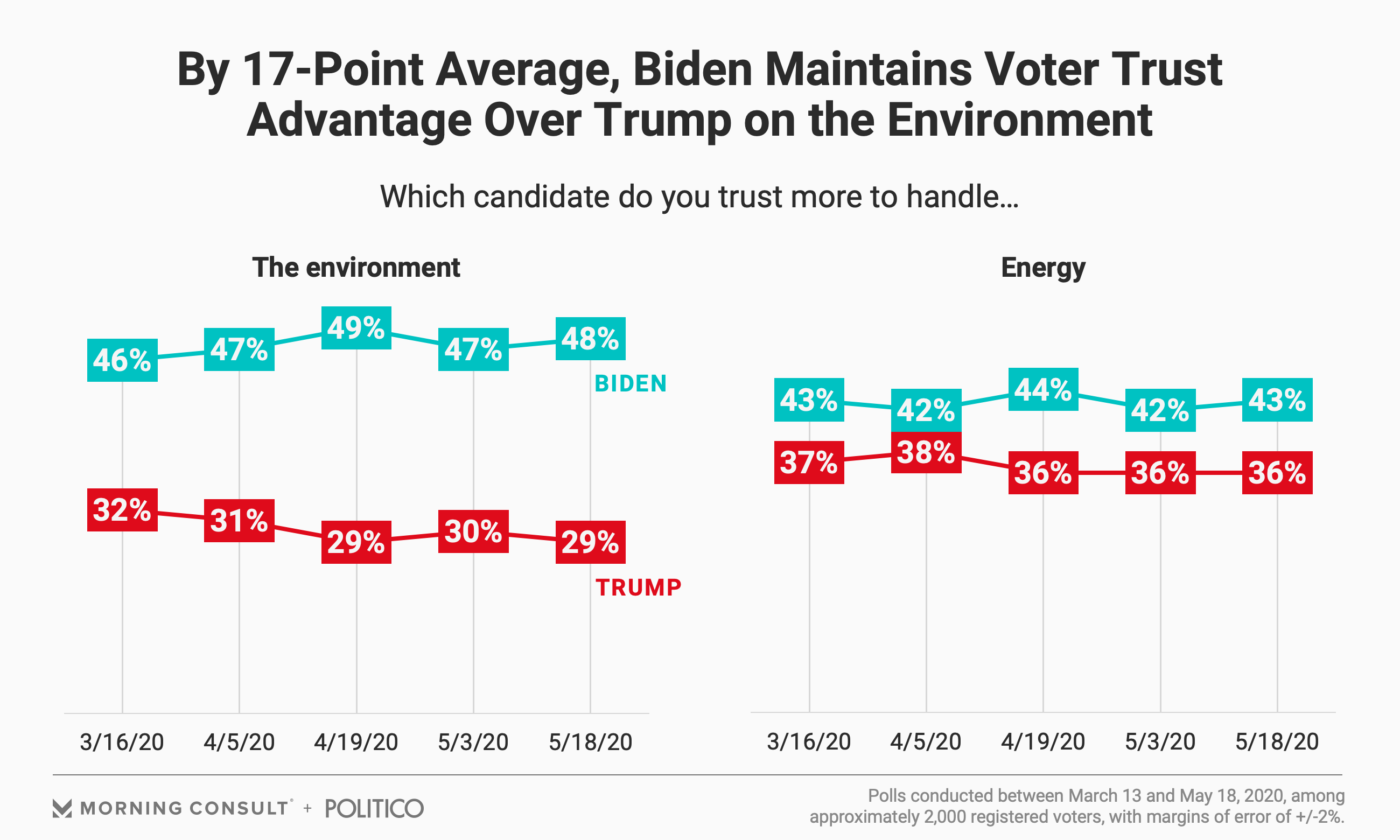 The gap between the two candidates on the environment dwarfs that of all other issues, including those that are likely top of voters’ minds this election cycle. Trump leads on handling jobs and the economic recovery following the pandemic, while Biden has the edge in voter trust on health care and containing the spread of the coronavirus.

The five polls tracking the two candidates were conducted between March 13 and May 18, surveying approximately 2,000 registered voters, each with a margin of error of 2 percentage points.

John Morton, a partner at the climate change advisory and investment firm Pollination and former senior director for energy and climate change for the Obama administration, said that this discrepancy is utterly unsurprising.

However, the “progressive” metric has changed since the Obama administration, as the prospect of coping with climate change becomes increasingly urgent. The Biden campaign’s first task when it comes to climate and environmental issues is to align with progressive groups on climate, exploring where they can find common ground on both policy and on defeating Trump in November.

The campaign has recently received endorsements from high-profile environmental organizations such as the League of Conservation Voters and the National Wildlife Federation Action Fund, and has been in regular touch with the youth-led Sunrise Movement since early March, according to a statement from the group. Varshini Prakash, Sunrise Movement co-founder, is serving on the Biden-Sanders task force on climate, announced earlier this month.

However, the Sunrise Movement’s statement said that Biden’s initial engagement was limited; while the campaign reached out immediately after releasing its original climate plan in June 2019, “virtually every other campaign” either sought feedback from the group before releasing their climate plans, or actively worked with the movement to develop them.

In recent months, however, the Biden campaign has said it is intent on adding detail and scope to its climate plan. Julian Brave NoiseCat, vice president of policy and strategy for the progressive think tank Data for Progress, pitched the Biden campaign on integrating policy ideas from other primary campaigns — including those of Inslee, Sanders and Warren —  as well as ideas from grassroots groups and think tanks that include “performance standards … justice for workers and communities and a more aggressive approach to the fossil fuel industry and the people that finance them.”

Data for Progress has been in close touch with the campaign since polling made it clear that Super Tuesday would leave Biden the clear front-runner. Asked whether he thinks the campaign is likely to update its climate plan, NoiseCat said he would be “shocked” if it does not.

“The Biden campaign is engaging with progressives in good faith and, in my experience, really incorporating our feedback into their messaging and their platforms and their decision-making, which is incredibly encouraging,” he said.

And Morton describes this adoption of other candidates’ platforms as the “usual evolution of candidates’ positions.”

Despite the increased engagement since Prakash’s involvement advising the campaign, the Sunrise Movement’s political director, Evan Weber, said the group has no plans to endorse Biden at this time, though it is “firmly committed to campaigning against Donald Trump this November.”

Meanwhile, Trump has focused his attacks on Biden on what he says is the prioritization of the environment over energy in his plans, which the president has juxtaposed with his own push toward “American energy dominance” during his three and a half years in the White House.

“Joe Biden, on the other hand, has openly pledged to ‘sacrifice’ energy jobs and ban fracking in pursuit of his extreme environmental agenda,” said Ken Farnaso, the campaign’s deputy press secretary.

While so far Biden has not pushed for a total ban on fracking in his existing climate plan, it does indicate that he would ban “new oil and gas permitting on public lands and waters.” And last week, he made it clear that he would rescind the president’s permit allowing the controversial Keystone XL pipeline to cross into the United States, which would effectively shut down the project. Feldman said Biden’s existing policy plan “includes significant investments in infrastructure and clean energy technology that will create 10 million good-paying jobs with an opportunity to join a union.”

Trump has also attempted to associate his opponent with the Green New Deal — a policy platform Biden did not write and has not formally endorsed.

“At an already tough time for Americans, Biden’s Green New Deal would burden businesses and people with massive regulations, reverse the progress we have made toward our energy independence and cost millions of jobs,” Farnaso said.

According to the May 8-10 Morning Consult/Politico poll, the president’s net approval (the share who approve minus the share who disapprove) for his handling of climate change is 29 points underwater, with 31 percent of voters approving and 50 percent disapproving.

Perhaps unsurprisingly, partisanship is a proxy for approval on Trump and climate change. Forty-three percent of Republicans report strong approval of the president’s handling of climate change, while 65 percent of Democrats report strong disapproval. Independents align more with the left than the right on this question, with 21 percent approving and 55 percent disapproving. 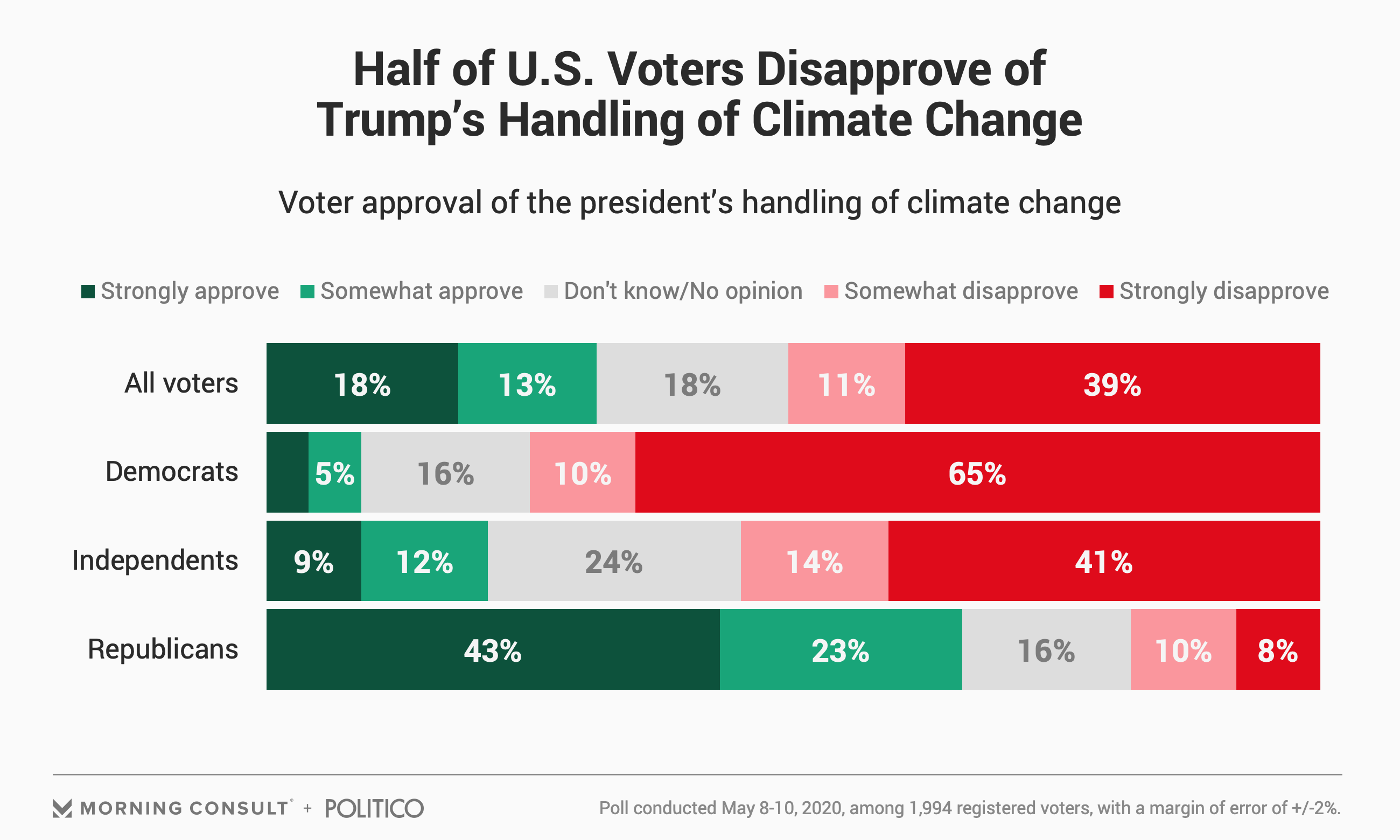 Trump rarely makes mention of climate change or environmental concerns, preferring to center the conversation on energy questions despite recent havoc in the oil markets brought on by record-low demand due to the coronavirus pandemic. But if progressives succeed in making these issues resonate with voters this election cycle, it may have a winning agenda come November.

“I want nothing more than for Republicans to take us on on climate grounds,” NoiseCat said. “If they want to make this election about climate change, I love our odds.”

This story has been updated to include the Biden campaign’s comments on job creation and infrastructure in his current climate plan.