A waitress tends to customers at a cafe in Berlin on May 20. As economies begin to reopen, growing shares of consumers in Germany, Britain and France are expecting periods of widespread unemployment in their respective countries.(Sean Gallup/Getty Images)
By John Leer

After precipitously falling in March and early April, consumer confidence across advanced Western economies gradually rebounded over the past month, with consumers in the United States, the United Kingdom, Germany and France all holding moderately more optimistic views of the economy than they did at the beginning of May. 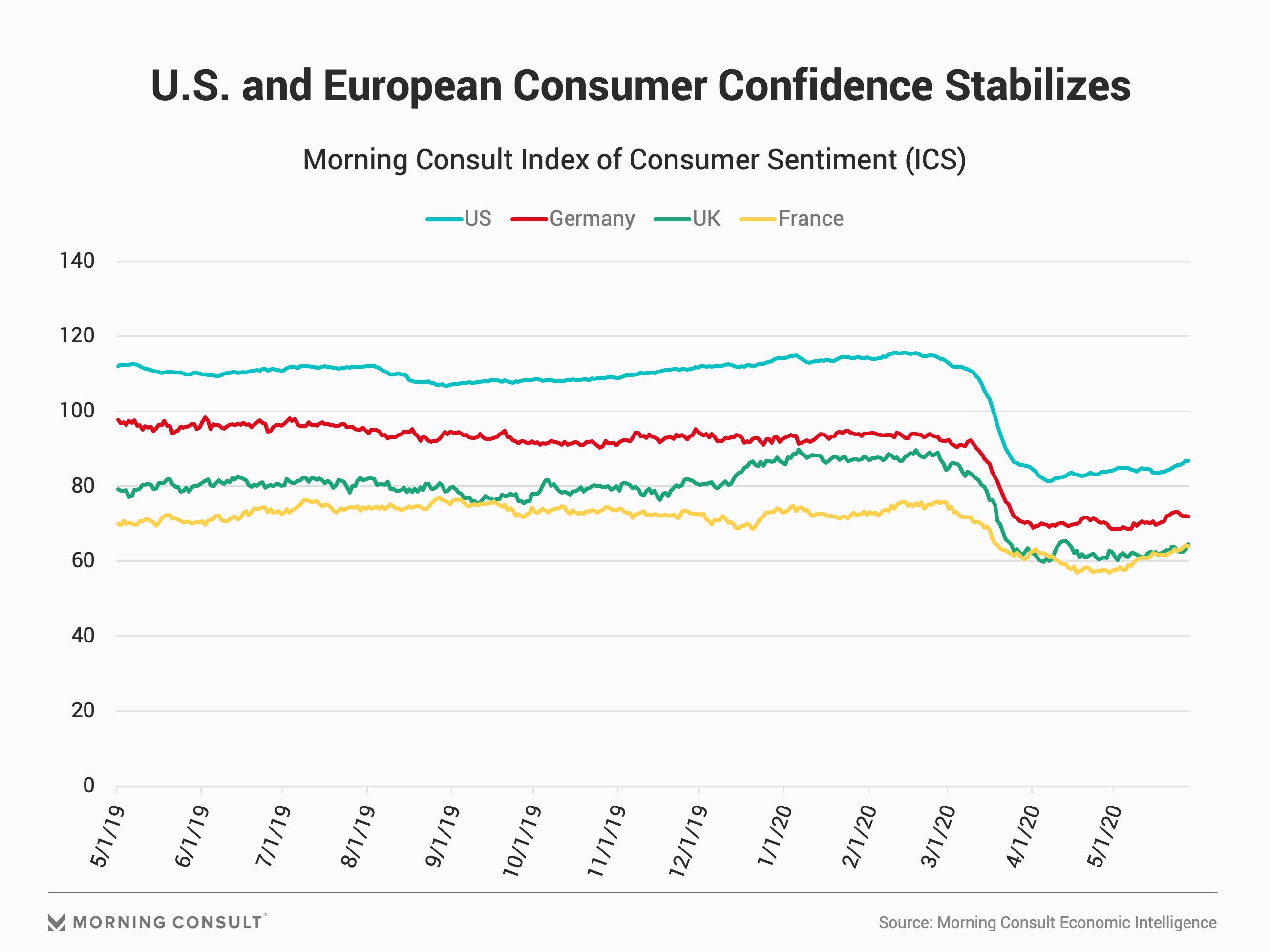 The recent stabilization and rebound in consumer confidence adds credence to claims from Federal Reserve Bank of New York President John Williams and European Central Bank chief economist Philip Lane that the worst of the economic downturn has likely passed in the United States and Europe. Going forward, it’s difficult to imagine spending and GDP contracting any more than they did in March and April when countrywide restrictions prevented most economic activity.

On the other hand, consumers continue to voice concerns about re-engaging in economic activities, and policy uncertainty in the United States and across Europe call into question the strength of households’ and firms’ balance sheets. U.S. businesses voiced similar concerns regarding sluggish business conditions in the Federal Reserve’s May Beige Book, and businesses across Europe expect an extremely slow recovery, although these views reflect the economic outlook in the middle of April.

Given that backdrop, what does the recent uptick in consumer confidence in the United States and across Europe say about the likely speed of an eventual recovery? Additionally, do recent developments in consumer confidence offer clues into the future paths of these economies relative to each other? Recent trends in the five underlying components of Morning Consult’s Index of Consumer Sentiment (ICS) provide insight into the drivers of consumer confidence across these four countries and the timing of a recovery.

Morning Consult’s data indicates that U.S. and European consumers are not yet in the clear. None of the four countries exhibits improvements in confidence across all five of the components of consumer confidence, and all four of them show conflicting short-run trends that are not sustainable in the long-run.

Consumer confidence has increased primarily due to an increase in consumers’ views of current buying conditions. After two months of waiting at home, consumers are ready to start spending. While that development signals an imminent economic rebound, weaknesses in Americans’ personal finances limit the ability of households to make such purchases.

The situation in Europe is slightly different. Consumers in the United Kingdom, France and Germany, whose governments are subsidizing employees’ paychecks, did not experience the same negative shock to their personal finances, but growing shares of the populations are expecting periods of widespread unemployment in their respective countries. If these countries substantially decrease the direct support they provide to workers, as reports suggest, then deteriorating business conditions should eventually weaken the demand for labor, harm consumers’ personal finances and limit their spending capacity.

These differences between the United States and Europe are likely to result in different timings of the recoveries. The three European economies are in a better position in the short run to restart their economies than America. Consumers’ finances in these countries have been less affected by the pandemic, which puts them in a stronger position to return to spending. However, in the long run, the American economy is in a better position to address the fiscal and monetary policy challenges resulting from the coronavirus pandemic, and consumers’ views from both sides of the Atlantic confirm this long-term outlook.

Analyzing these four countries together is important because of the close economic ties they share and their overall level of economic interdependence. The U.S. and European economies can both grow while the other suffers, but prolonged periods of sluggish growth in either economy act as headwinds to growth in the other economy. Research from the European Central Bank finds that changes in consumer confidence in the United States influences confidence in the euro area, which in turn affects consumer spending in the euro area. In other words, there may be a direct causal connection across these four countries. Additionally, given relatively similar sectoral compositions and legal frameworks, they tend to exhibit similar responses to economic shocks, thereby providing a natural peer group for the purpose of cross country analysis.

Current state: an increase in U.S. and European consumer confidence in May

By and large, consumer confidence across all four countries exhibits a similar pattern of a decrease in mid-March followed by a stabilization throughout April and a modest rebound in May. 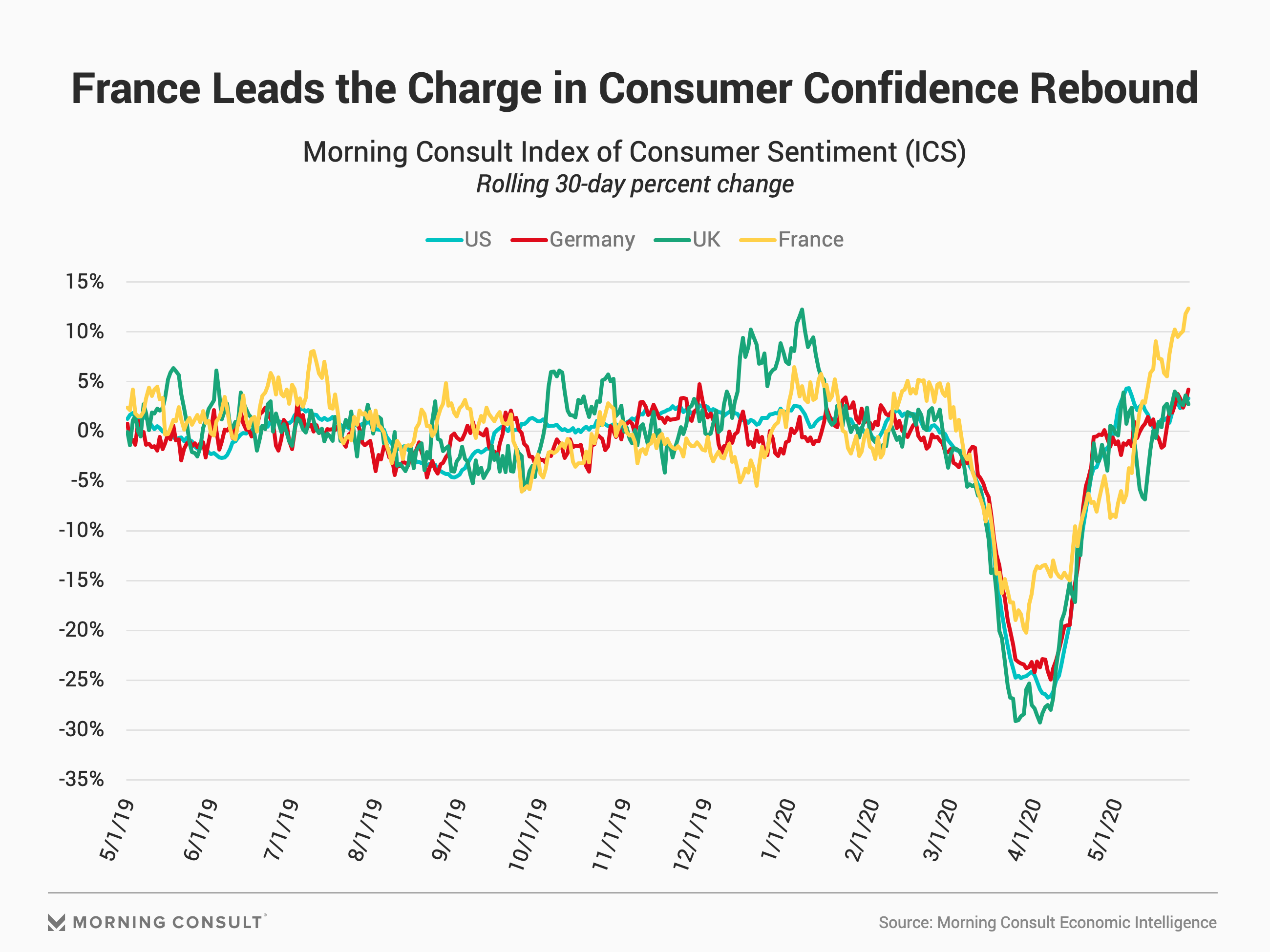 This data directly supports the view that the U.S. and European economies bottomed out in April. It also suggests that the timing and magnitude of the recoveries in consumer spending and economic activity should be relatively similar across these countries, with the caveat that the rebound in consumer spending may occur slightly later in France than in the other countries. The data provides no indication of a noticeable difference in consumers’ outlook in the United States and Europe.

Morning Consult’s ICS in the United States was 86.74 as of May 28, which is 5.51 points higher than the low it reached on April 7. As previously reported, U.S. consumer confidence rebounded in late April and stabilized in the first half of May. The second half of May saw yet another increase, with consumer confidence gaining 3.14 points from May 15 to May 28.

Morning Consult’s ICS in Germany is 71.93 as of May 28, which is 3.48 points higher than the low it reached on May 3. Confidence in Germany exhibits a double-dip, or a “W”-shaped, recovery, with consumers briefly growing more confident from April 14 to 21. There is no evidence of a surge in confidence following Germany’s announcement to reopen parts of its economy, in part because the reopenings occurred at different times and to different degrees across the country.

Consumer confidence in the United Kingdom briefly rebounded in mid-April following the release of Prime Minister Boris Johnson, who had contracted the coronavirus, from the intensive care unit. But the “Boris bump” was short-lived, and confidence declined again before starting the more gradual rebound over the past two weeks. Morning Consult’s ICS in Britain was 64.46 as of May 28, which is 4.64 points higher than the low it reached on April 5.

In the short run, the components can and do move in different directions. However, in the long run, business conditions, personal finances and current buying conditions reflect similar economic and financial fundamentals, thus moving in similar directions. For example, declining business conditions eventually cause businesses to lay off workers, which in turn harms consumers’ personal finances. Thus, short-term divergences in consumers’ responses to these questions are unsustainable. Consumers reconcile these inconsistencies in light of developments in the news or their own personal experiences.

For the purpose of forecasting, dramatic divergences across the five component questions indicate a potentially unsustainable development.

The data on consumer views of their personal finances reflects the different labor market dynamics across these four countries and the different policy approaches adopted to assist households during the coronavirus pandemic. 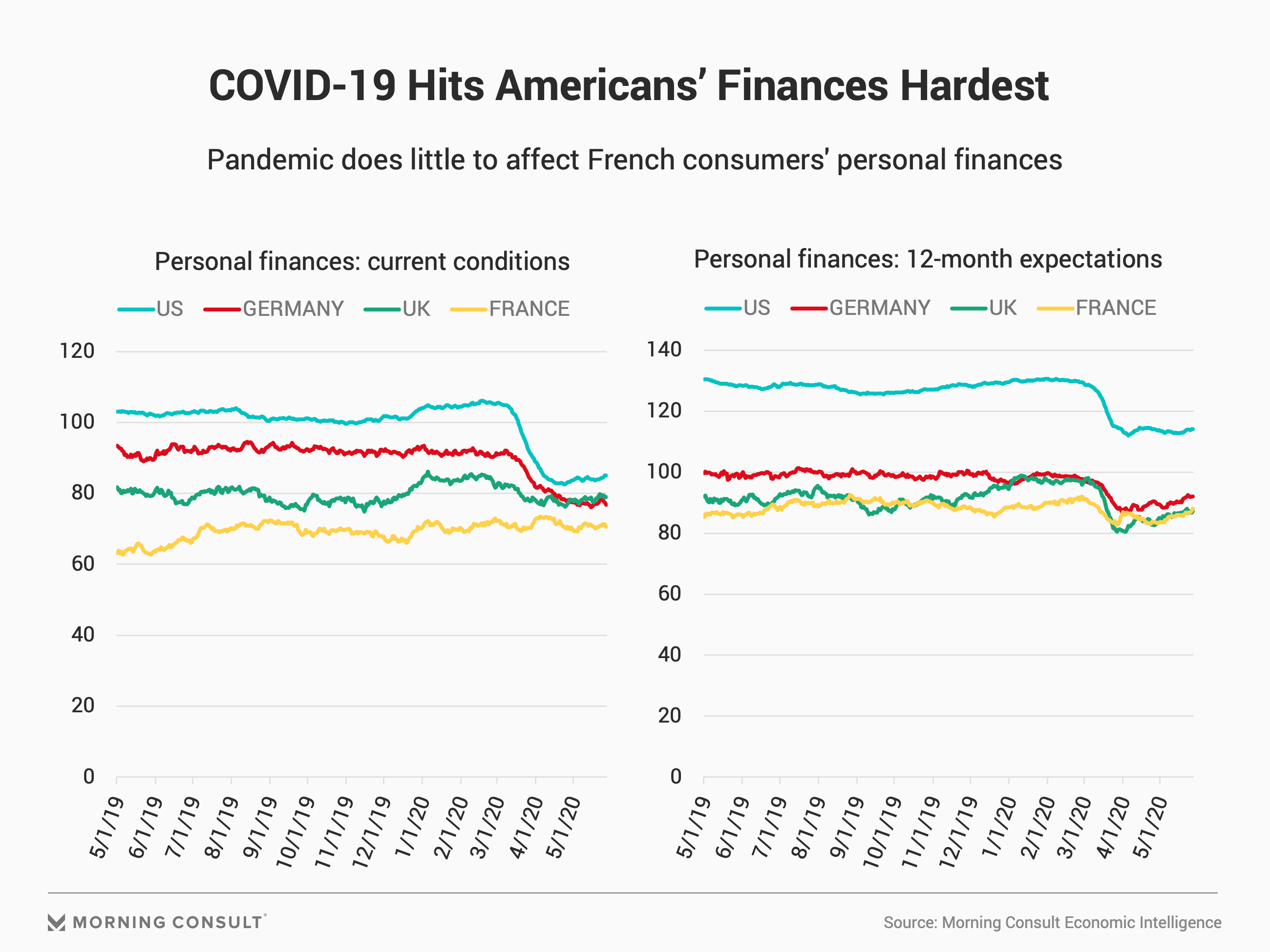 Consumers in the United States experienced the strongest decrease across both personal finance questions, corresponding to the larger increase in unemployment in the United States  relative to the other three countries. British consumers have not changed their current assessment of their personal financial conditions relative to 12 months ago to the same degree as American consumers.

Consumers in France and Germany exhibited greater stability in their views of their current and expected personal finances than consumers in the United States and the United Kingdom. This finding is consistent with more generous unemployment programs, more direct aid to workers and stricter labor laws in Germany and France.

The recent rebound in the ICS has primarily been driven by an improvement in consumers’ views of current buying conditions, with all four countries registering an increase in this component since mid-April. 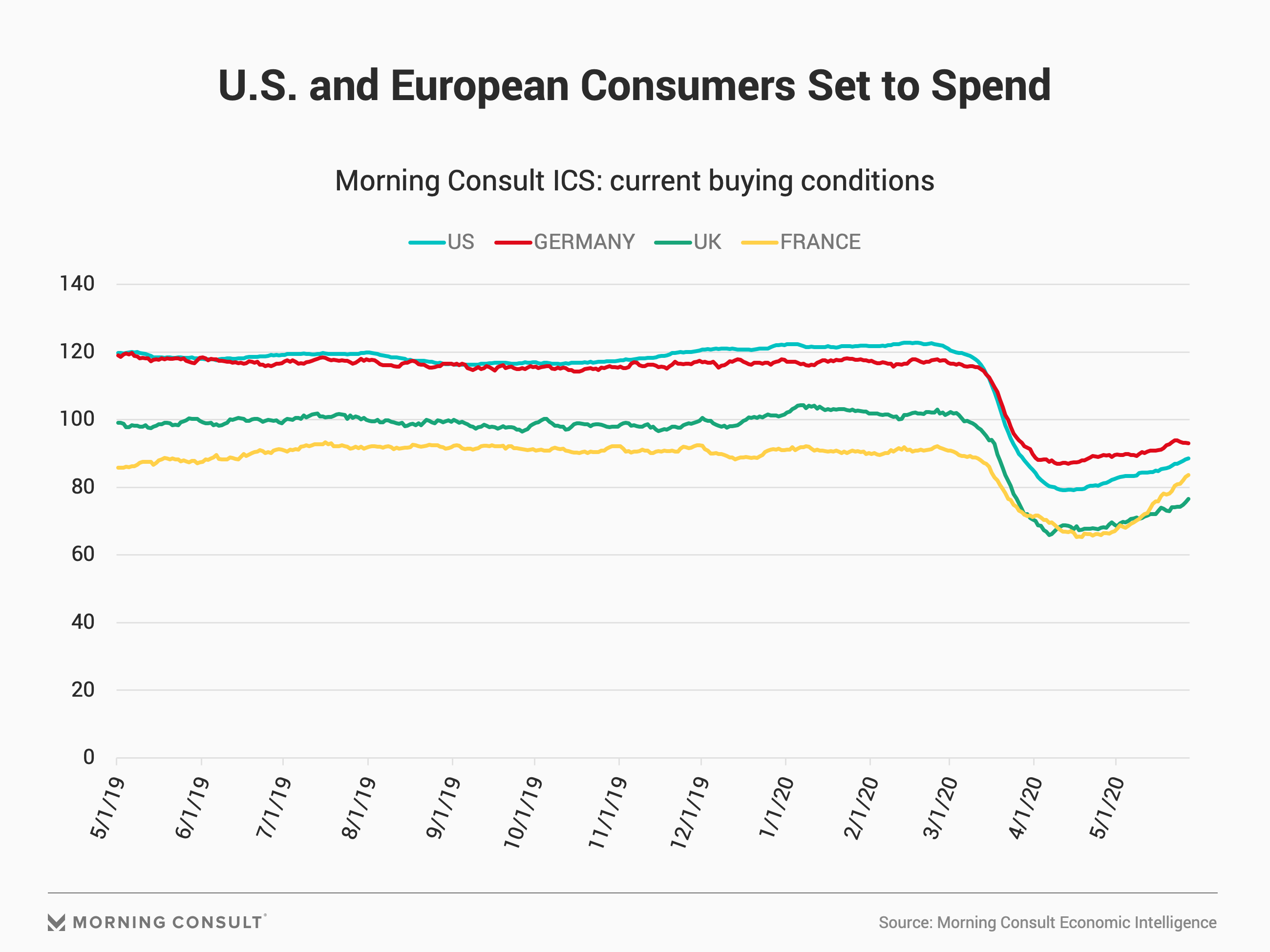 The exceptionally strong rebound in France and Germany provides evidence of pent-up or deferred demand. In countries where consumers’ views of their personal finances changed the least, consumers’ views of current buying conditions are the closest to their pre-COVID levels.

Germany’s economy is more dependent on global growth than are the other three given the importance of Germany’s export-oriented manufacturing sector to its overall economy. Thus, an improvement in current buying conditions in Germany is not as important to the German economy as it is to the other three.

Consumers’ views of business conditions remain bleak across all four countries even as these countries begin reopening businesses. 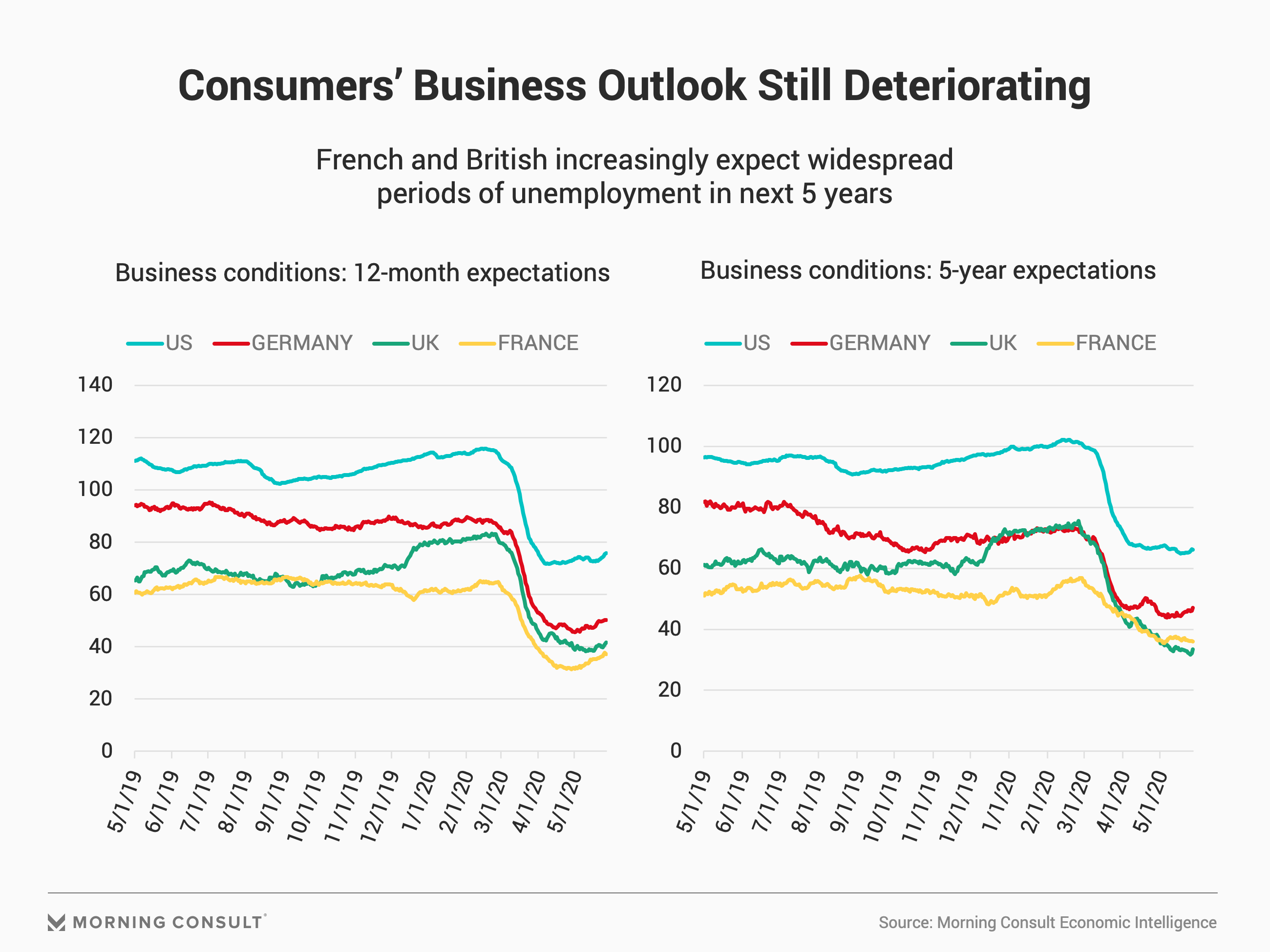 The decrease in consumers’ 12-month expectations for business conditions is noticeably sharper than the decrease in expectations of their personal finances over the next 12 months, particularly in the United Kingdom, Germany and France.

Relative stability doesn’t mean the worst is behind us

Aggregate consumer confidence data for the United States and Europe presents an encouraging view of the strength of consumers in these countries and the prospects for a rebound in consumer spending and economic activity. However, detailed component-level data paints a less optimistic picture. It provides evidence of unsustainable developments in consumers’ economic and financial outlook across Europe and the United States that are likely to manifest themselves over different time horizons across the four countries.

In the short term, the rebound in consumers’ views of current buying conditions should more rapidly and dramatically translate into increases in consumer spending in Europe relative to the United States. Consumers in Europe have not had their personal finances as severely negatively affected by the coronavirus pandemic as U.S. consumers, and Europeans’ expectations of their future personal finances have also been less affected, thus making it more feasible and justifiable for them to make a major household purchase.

Meanwhile, in the United States, a greater share of consumers has had their personal finances negatively affected by the coronavirus. While U.S. consumers increasingly say that now is a good time to make a major household purchase, fewer households have the financial capacity to make those purchases.

As for the long term, consumers express a weaker level of confidence. U.S. and European consumers hold relatively negative views of business conditions in their respective countries, with five-year business expectations in France and the United Kingdom continuing to deteriorate. In the long run, the divergence between European consumers’ views of business conditions and their own personal finances is not sustainable. Businesses employ workers, who in turn use that money to finance consumer spending.

The connection between business conditions and personal finances is not as strong in Europe as it is in the United States, but that is likely to change. Consumers in Europe currently have access to greater pandemic-related financial support from the government. Thus, business conditions in Europe can deteriorate more sharply and longer than in the United States without affecting consumers’ finances or their financial outlooks.

However, Germany and France are both developing plans to shift the financial burden of paying the wages of workers affected by the pandemic from the government to businesses. If companies have to bear this cost, the connection between business conditions and personal finances should strengthen in Europe, with weakening business conditions driving down consumers’ personal finances.

European consumers’ expectations of business conditions over the next 12 months and five years also reflect the high level of economic policy uncertainty in Europe. This week, France and Germany offered proposals for European countries to jointly share the costs facing countries hit hardest by the pandemic, and deadlock in the ongoing Brexit negotiations is unlikely to help the economic recovery in Europe. These long-term policy challenges are likely to weigh on consumer spending and economic activity in Europe.