As America grapples with racial inequalities and discriminatory police tactics amid the nationwide protests over the death of George Floyd, a black man, while in custody of a white Minneapolis police officer, the circumstances have placed President Donald Trump on fraught political turf.

A Morning Consult poll conducted Sunday and Monday found that Trump — who reportedly told governors they don’t “have to be too careful” in seeking “retribution” from demonstrators in their states — trails presumptive Democratic presidential nominee Joe Biden by double digits when it comes to whom voters trust the most to tackle a number of issues related to the demonstrations that erupted over the weekend in dozens of U.S. cities, including police reform and racial inequalities across American society. 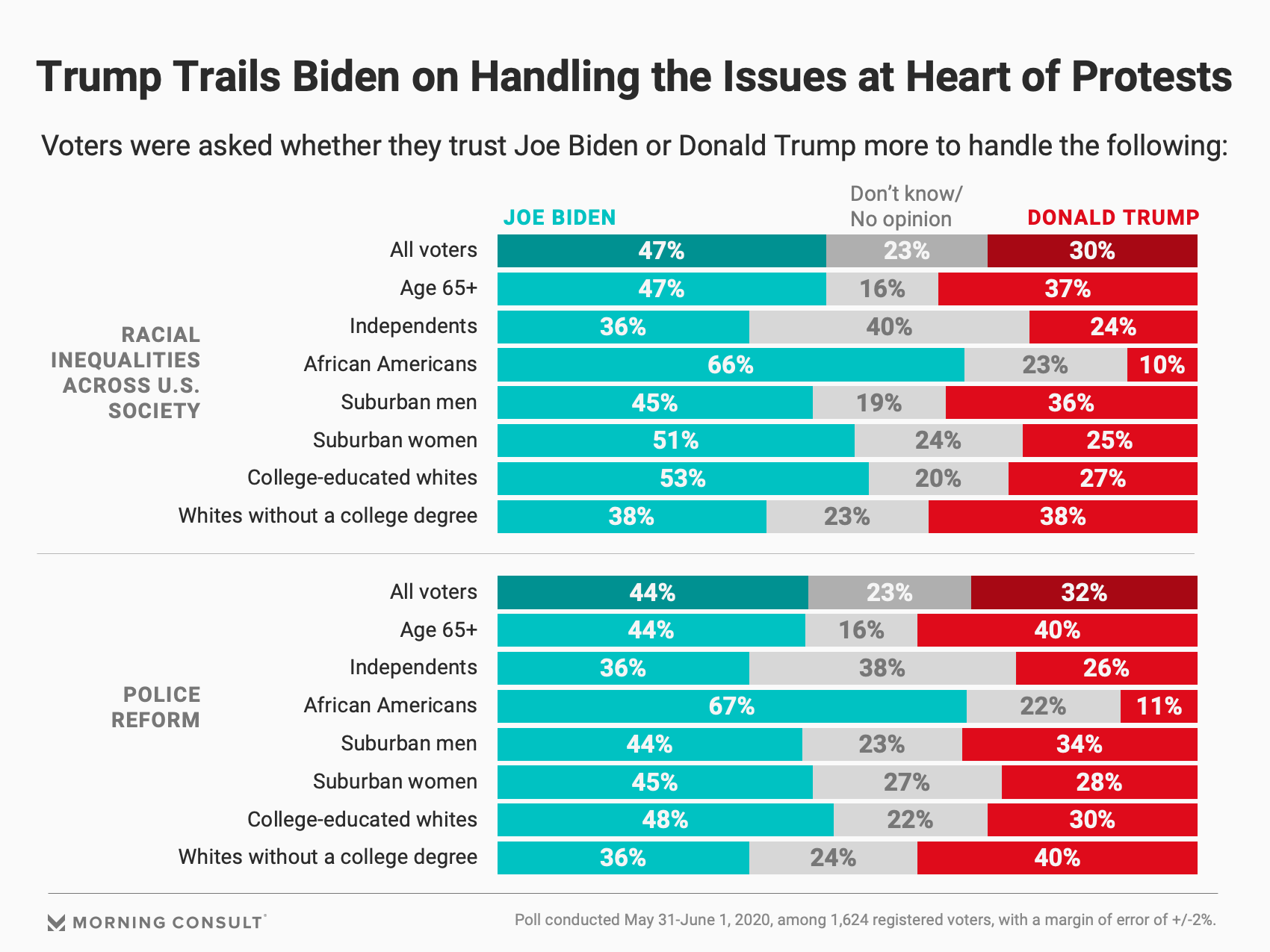 Biden, who has aligned himself with peaceful protesters, has the largest advantage over the president on addressing racial inequalities, leading Trump 47 percent to 30 percent, and that advantage persists among groups of importance to the November election, including voters over the age of 64 (10 percentage points), college-educated whites and suburban women (26 points each) and black voters (56 points).

The former vice president leads Trump by a similar spread — 44 percent to 32 percent — on the broad issue of police reform among voters overall and key constituencies, and by 11 points, 44 percent to 33 percent, on whom voters trust the most to handle the current protests.

When it comes to the other major crisis facing the country, the survey found more voters trust Biden to handle the spread of coronavirus (44 percent to 34 percent), while they’re split evenly at 42 percent on whom they trust to handle the economy — an improvement for the former vice president compared to previous Morning Consult polling, which has shown Trump ahead on economic issues.

But despite the events of the weekend, Morning Consult’s daily national tracking of the presidential contest, which surveys an average of about 4,600 registered voters each day with a 1-point margin of error, found only marginal change in the state of the head-to-head presidential race between Thursday and the end of the weekend. By the end of Sunday, Biden led Trump by 5 points, 46 percent to 41 percent. That’s a 2-point increase since Thursday, before Trump’s comments Friday referring to protesters as “thugs” after a Minneapolis police precinct was burned down.

Biden, who has largely stayed off the campaign trail in-person throughout the coronavirus pandemic, has made public appearances amid the protests. On Sunday, he visited a protest site near his home in Wilmington, Del., and on Monday, he met with community leaders at the city’s Bethel AME Church before participating in a virtual event with mayors, including Atlanta mayor and potential vice presidential prospect Keisha Lance Bottoms.

In a Medium post, Biden, who served as the No. 2 for America’s first black president and whose primary campaign was propelled by support from black Democrats, said protesting “brutality is right and necessary” and “an utterly American response.” But he cautioned that “burning down communities and needless destruction is not.”

On Saturday, Trump said that Floyd’s death was a “grave tragedy” and spoke with his family, but then used his Twitter account to repeatedly criticize protesters as “anarchists” after late-night demonstrations turned violent in a number of cities, including Atlanta, Philadelphia and outside the White House.

News of the protests has broken through in a way that other major news events this year have failed to do: 67 percent of voters said they’d seen, read or heard “a lot” about the demonstrations, more than almost all of the nearly 160 events tested so far except for the death of former NBA star Kobe Bryant and Congress’ passage of the nearly $2 trillion coronavirus stimulus bill.

Most voters (57 percent), including 74 percent of Democrats and 52 percent of independents, support the protests, but Republican voters are split on the issue, 40 percent to 38 percent. By comparison, 28 percent of voters support the coronavirus-related protests to reopen the country, while 49 percent oppose them.

And while more than 7 in 10 voters said it was important for Trump to help handle the protests (71 percent) and address racial inequality in the United States (72 percent), larger shares placed that responsibility at the local level with mayors, governors and the police. The gap was wider among black voters.