Protesters demonstrate against police brutality and the death of George Floyd in police custody in Minneapolis outside the St. Louis City Justice Center and City Hall on June 1, 2020. A Morning Consult poll found that 54 percent of U.S. adults support the ongoing protests in response to the death of Floyd. (Michael B. Thomas/Getty Images)
By Cameron Easley

The alleged murder of George Floyd by a Minneapolis police officer is the latest high-profile, caught-on-tape moment to rock the nation’s conscience, and while the act of protest itself is often unpopular, most Americans say they are supportive of the demonstrations that have taken place across the country during the past several days.

Fifty-four percent of U.S. adults surveyed in a new Morning Consult poll conducted Sunday and Monday said they support the ongoing protests in response to the death of Floyd and other black Americans. That includes 69 percent of Democrats and 49 percent of independents, who favored the protests by a more than 2-to-1 margin. Republicans were split over the demonstrations, with 39 percent in support and 38 percent opposing them. 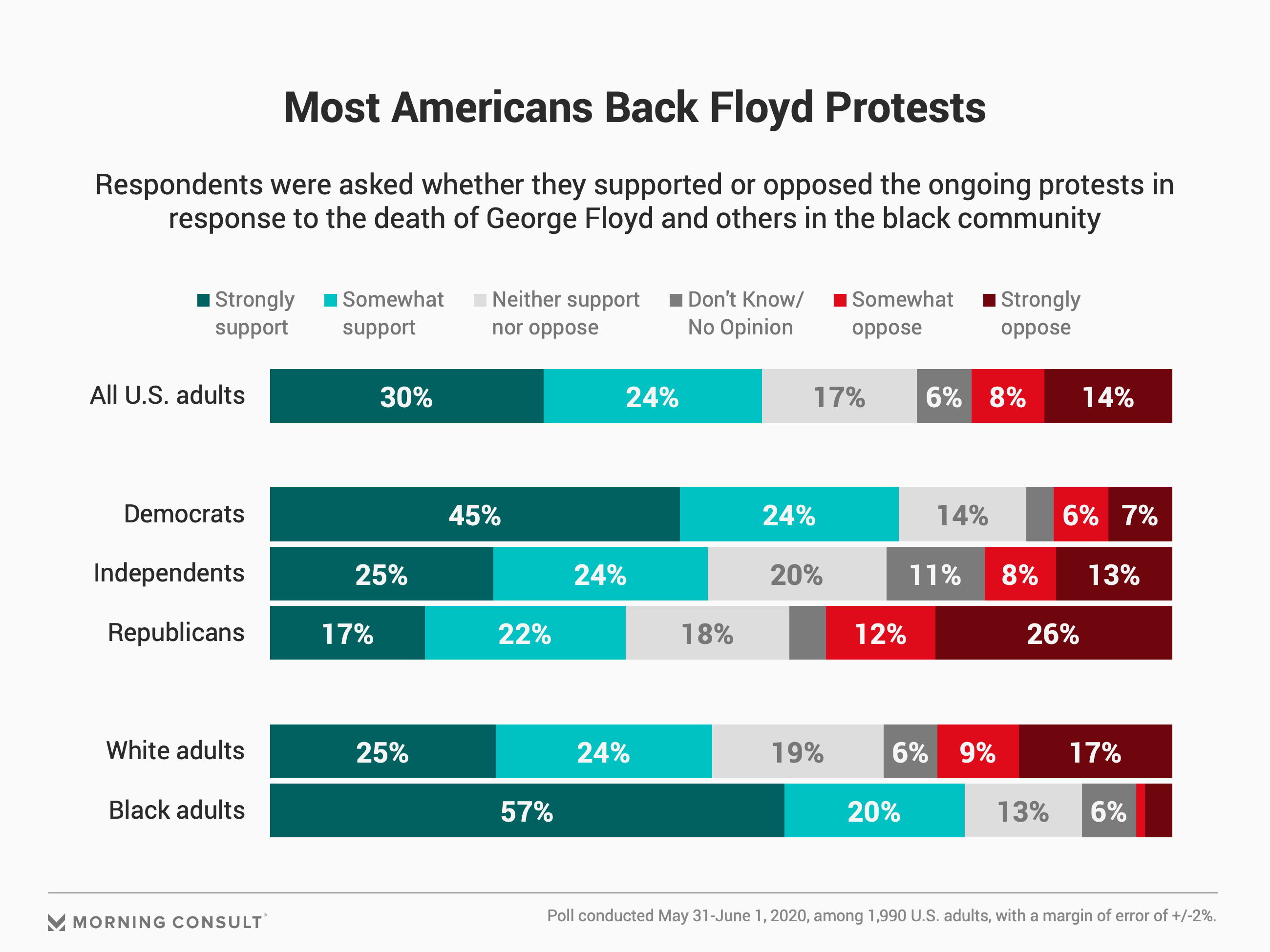 In recent years, the deaths of a number of black Americans at the hands of law enforcement — from Eric Garner and Laquan McDonald in 2014 to Philando Castile in 2016 — have pierced the country’s consciousness due to video evidence, and the Floyd incident continues that trend. A separate Morning Consult poll conducted Friday to Monday found 79 percent of adults said they’d seen all or some of the video showing former Minneapolis police officer Derek Chauvin kneeling on Floyd’s neck for several minutes. Chauvin has since been charged with third-degree murder.

Both surveys that were conducted over the weekend polled roughly 2,000 U.S. adults, with margins of error of 2 percentage points.

Outrage at the video’s contents appears to be bringing along a segment of the public toward what many of the protesters are arguing: that police violence against the public is a mounting problem, and that white Americans are a privileged class in the country. 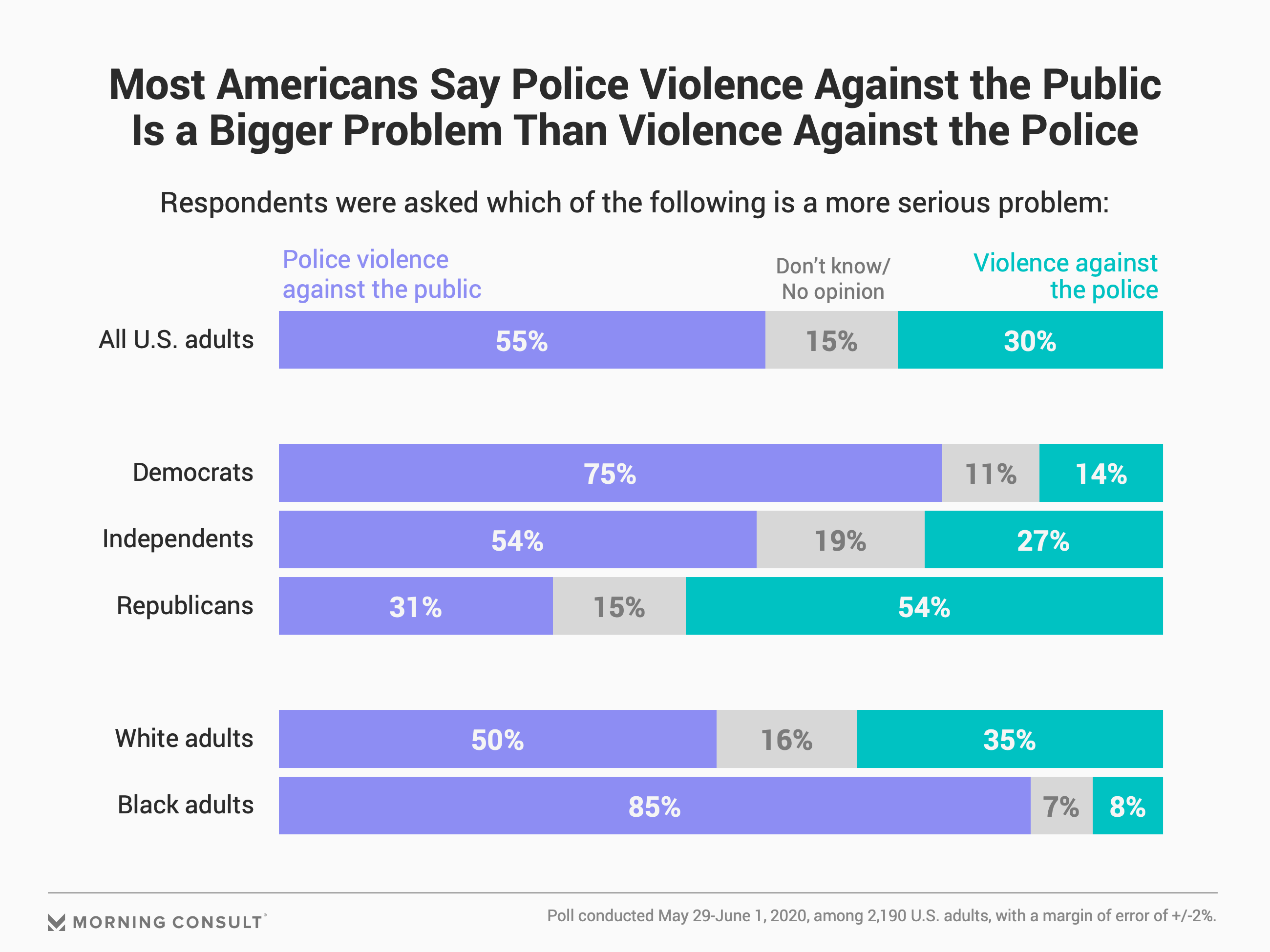 Other trend data speaks to the second argument, though that impact could be fleeting. Sixty-one percent of U.S. adults in the May 29-June 1 poll agreed that “many white people do not recognize the real advantages they have,” up 12 points from an early 2019 survey. Fifty-one percent said “many people nowadays do not take racism seriously enough,” which is up 10 points over that same time span.

Another 58 percent said they agreed that racial discrimination against black people “is one of the biggest problems facing America today.”

The clear-cut nature of the Floyd video has led to an unambiguous response among the public: Seventy-seven percent “strongly support” the firing of the officers involved in Floyd’s death, while 80 percent staunchly back Chauvin’s arrest, with 72 percent saying the same of the murder charge filed against him.

But when it comes to the larger conversation involving police brutality and killing of black men at the hands of the state, significant divides persist, particularly along partisan lines. For example, roughly two-thirds of Republicans agreed that “if you abide by the law, the police will leave you alone, no matter your race or your ethnicity.” Two-thirds of Democrats, meanwhile, disagreed with that assertion.

And while 65 percent of Republicans say police violence against black people is rare, and that isolated incidents get too much attention, 82 percent of Democrats sided with the statement that “police violence against black people is widespread and common, and we do not pay enough attention to systemic bias in criminal justice.”

Those sentiments among Republicans help explain drops in support for protests Morning Consult measured in a split-sample experiment. 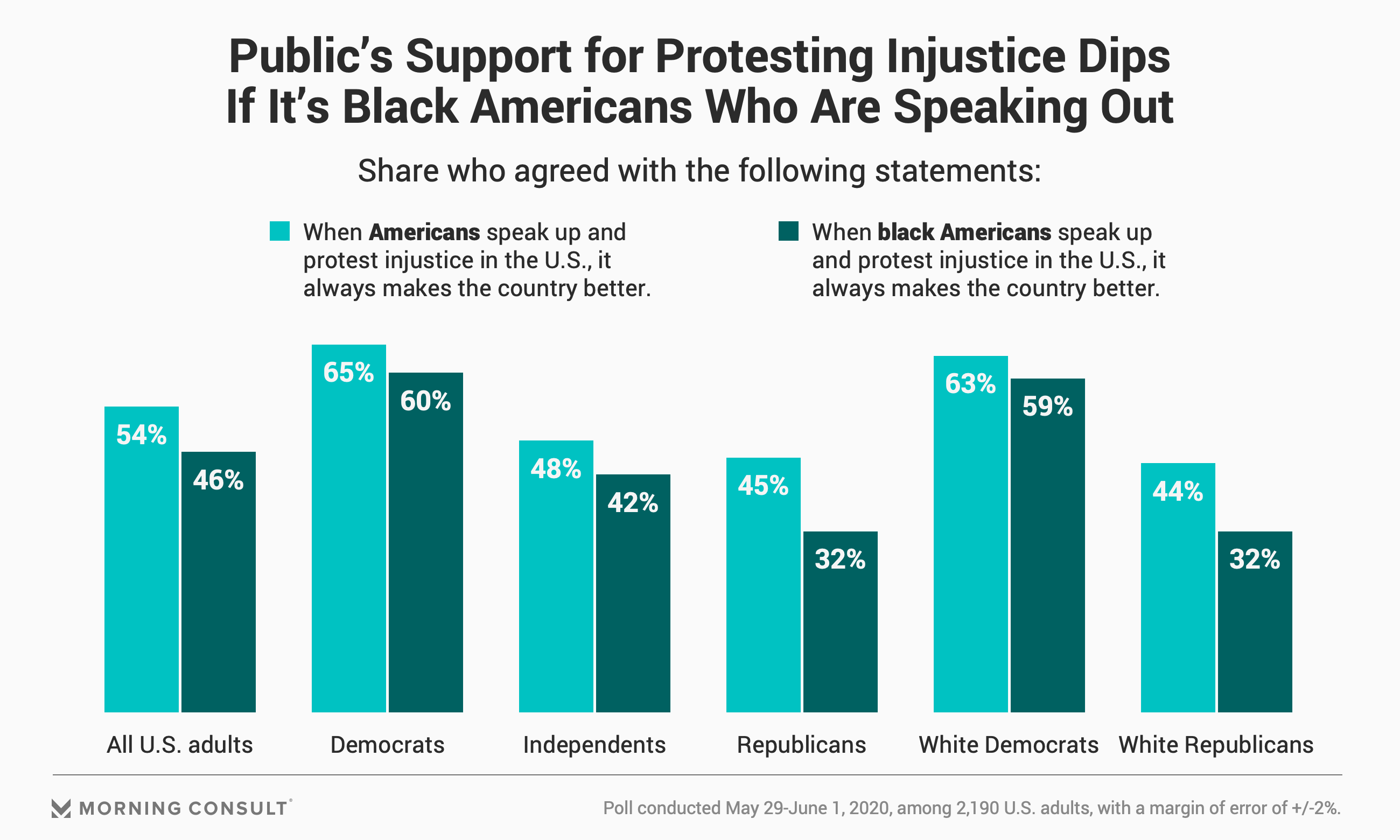 Forty-five percent of Republicans agreed that “when Americans speak up and protest injustice in the United States, it always makes the country better.” When substituting “black Americans” for the sentence’s subject, that share of agreement dropped to 32 percent among Republicans — among the largest declines measured.

Regardless of how Americans feel about the protests and the movement that inspired them, most (54 percent) are in agreement that the worst of the demonstrations is not over, with more expected “to get larger and more widespread in the coming days and weeks.”