COVID-19 Made It Harder to Campaign, but It’s Been a Boon for Opposition Researchers 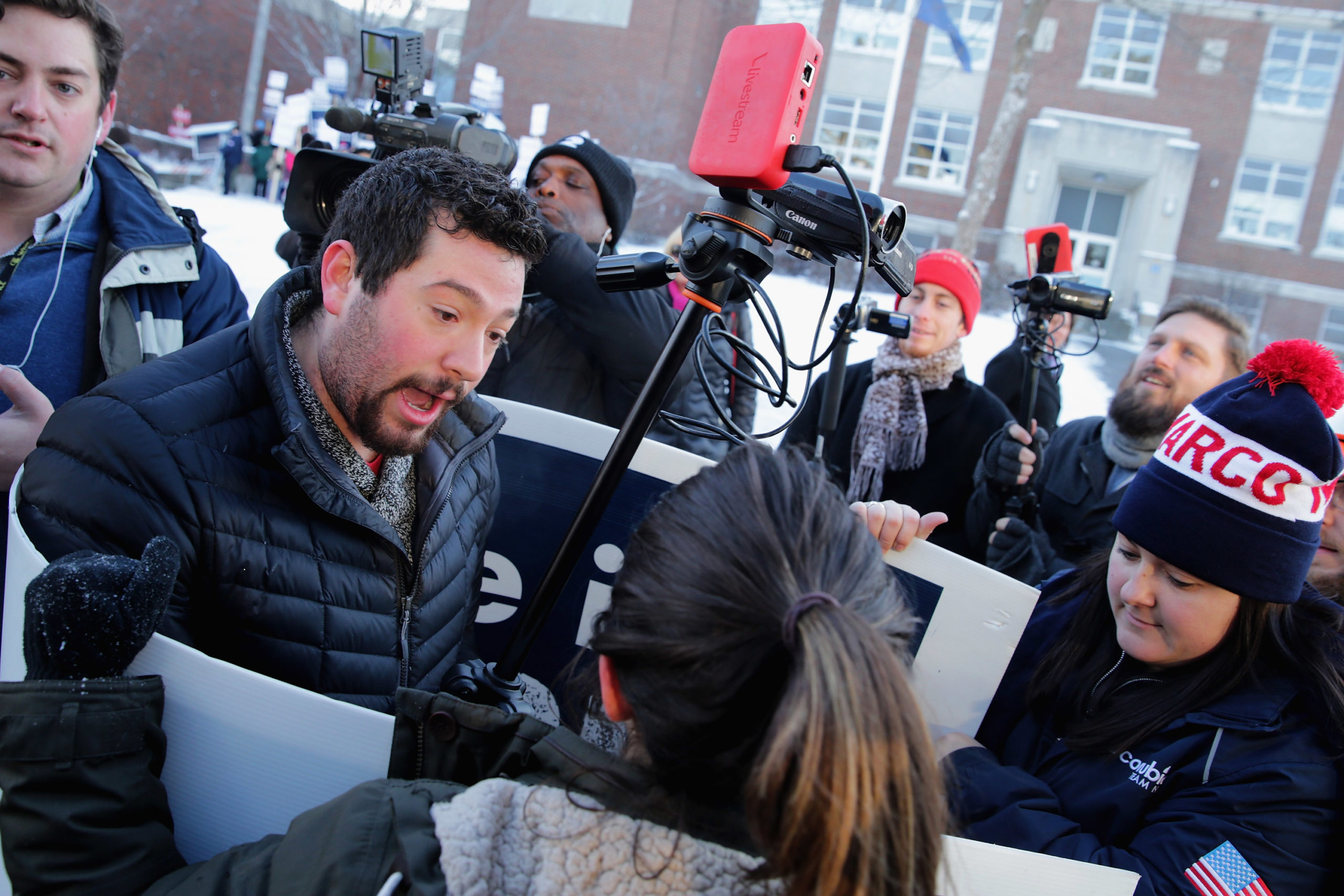 Volunteers and staff for Sen. Marco Rubio (R-Fla.) face off with trackers and demonstrators from American Bridge, a Democratic opposition research firm, outside a polling place in Manchester, N.H., during the Republican presidential primary in February 2016. With in-person campaign events mostly sidelined for the past few months, opposition researchers say they've gone the digital route to amass a record amount of material ahead of the 2020 general election. (Chip Somodevilla/Getty Images)
By Eli Yokley

Sen. Doug Jones had a moment of candor late last month about the effort to catch him in a verbal flub ahead of his uphill climb to re-election in November when an interviewer on Birmingham Mountain Radio asked him about a video clip that showed him laughing off a query from a Repubilcan operative with a camera.

“The one thing that has come out of this pandemic that I don’t miss,” the Alabama Democrat said, is “having some little jerk with a camera stuck in my face throwing out these questions to try to catch a political statement. They call them trackers, and they’re everywhere.”

While those “little jerks” may not have been sticking their cameras directly in the faces of candidates in tough races over the past few months, the top Democratic and Republican opposition research groups that employ trackers said they have thrived amid the virtual campaigning brought on by the coronavirus pandemic, even as traditional pieces of the campaign apparatus — from fundraising to major events — have been hamstrung.

Rather than long hours in the car crisscrossing contested states and congressional districts, tailing contenders for president, Congress, governor and state legislative seats in a bid to capture uncomfortable moments or gaffes, opposition researchers have been tracking the candidates remotely, tapping into virtual events to collect what both groups described as a record amount of candidate content.

“Since this pandemic started and in-person events disappeared overnight, our team quickly adapted, covering more than 1,600 events by Republicans up and down the ballot and producing hundreds of thousands of hours worth of footage that will be used by American Bridge and our allies over the next 5 months,” said Bradley Beychok, the president of American Bridge, a Democratic super PAC.

And Sarah Dolan, executive director of America Rising — which captured Jones’ May 29 radio interview maligning the tactics — said her group has “tracked more events in April and May, independently, than any prior individual month” since the GOP super PAC’s 2013 founding.

Related: The Lincoln Project Turns Attention to McConnell in Effort Against GOP Senators

While trackers are still performing classic duties such as capturing radio interviews, one ex-tracker said infiltrating campaign video events meant for supporters and the media on private platforms such as Zoom has become the name of the game during the pandemic. To succeed, some are creating fake personas and dummy email addresses for when they sign up for the online gatherings in hopes of avoiding detection by campaigns, which are culling lists for suspicious accounts and errant phone numbers with a “202” area code from Washington, D.C.

Not all tracking efforts have been successful. One Democratic campaign official working in a competitive Senate race said they denied a Republican tracker who attempted to sign up for a recent virtual event with a work email. And America Rising, which has been known to pepper candidates such as Jones with unflattering questions, has lost that ability since candidates are now more likely to be found walking away from their own kitchen tables than to their cars outside after events.

But for the most part, both American Bridge and American Rising said their trackers have not been booted from virtual events, as they sometimes are when trying to attend in-person gatherings that are screened by the campaigns. Without hotel bookings and gas bills, it’s also been cheaper and quicker, allowing one tracker to cover multiple events on opposite ends of their targeted area.

And barring candidate connectivity issues, virtual campaign events produce typically well-lit video of candidates speaking straight into the camera — an upgrade from the bumpy or grainy footage that had been captured in the past as a result of distance, bad fluorescent ballroom lighting and/or the occasional supporter or campaign staffer trying to block their cameras with their hands, body or even campaign signs.

“It does make for really great clips,” Dolan said. “It’s very obvious what they’re saying, and you can’t say the mic was muddled.”

Related: What the Partisan Gap on Comfort With Attending Political Rallies Could Mean for Biden and Trump

The fruits of trackers’ labors — supplemented by the work of trackers for other outside groups and the campaigns themselves — are already evident as candidates host virtual town hall-style events and participate in remote news interviews.

Democrats have released footage of Sen. Martha McSally (R-Ariz.) dismissing a question about insider trading allegations against GOP senators during a local Q&A, while Republicans have used footage of Theresa Greenfield’s answer to a foreign policy question during an editorial board interview to make the case that the Iowa Democrat is “unprepared” for office as she challenges Republican Sen. Joni Ernst. In Georgia, Sen. Kelly Loeffler’s campaign used the same footage that was captured by American Bridge as part of a video attacking her main Republican rival, Rep. Doug Collins, for defending “the swamp” President Donald Trump pledged to drain during an online event with a conservative group.

The clips, which will be joined by new footage as the country reopens and campaigns dip their toes back into in-person events, provide fodder that campaigns can use in ads and help push a press narrative about rivals in the weeks and months before the election.

“You’re not going to have a hit coming out of every campaign event or every event we track,” Dolan said. “Having that record of their comments over the course of a two-year campaign as dynamics in the political sphere shift, we can go back and say we have this transcript or footage. That’s the real value of tracking every single event.”