A man holds a drawing of former NFL player Colin Kaepernick as hundreds of people participate in a silent demonstration in front of Gracie Mansion, the mayor's residence, to protest the killing of George Floyd by a Minneapolis Police officer on Wednesday in New York City. New polling shows 41 percent of Republicans said athletes should feel free to express their political and social views, up from 28% last year. (Spencer Platt/Getty Images)
By Alex Silverman

Hours after President Donald Trump resumed his crusade against NFL players demonstrating during the national anthem with a series of tweets Friday night, NFL Commissioner Roger Goodell said the league was “wrong” in its handling of players protesting police brutality in prior seasons. New research from Morning Consult reveals that the public has become more supportive of professional athletes’ speaking out about political and cultural issues in the wake of the alleged murder of George Floyd, led by a double-digit shift among Republicans. 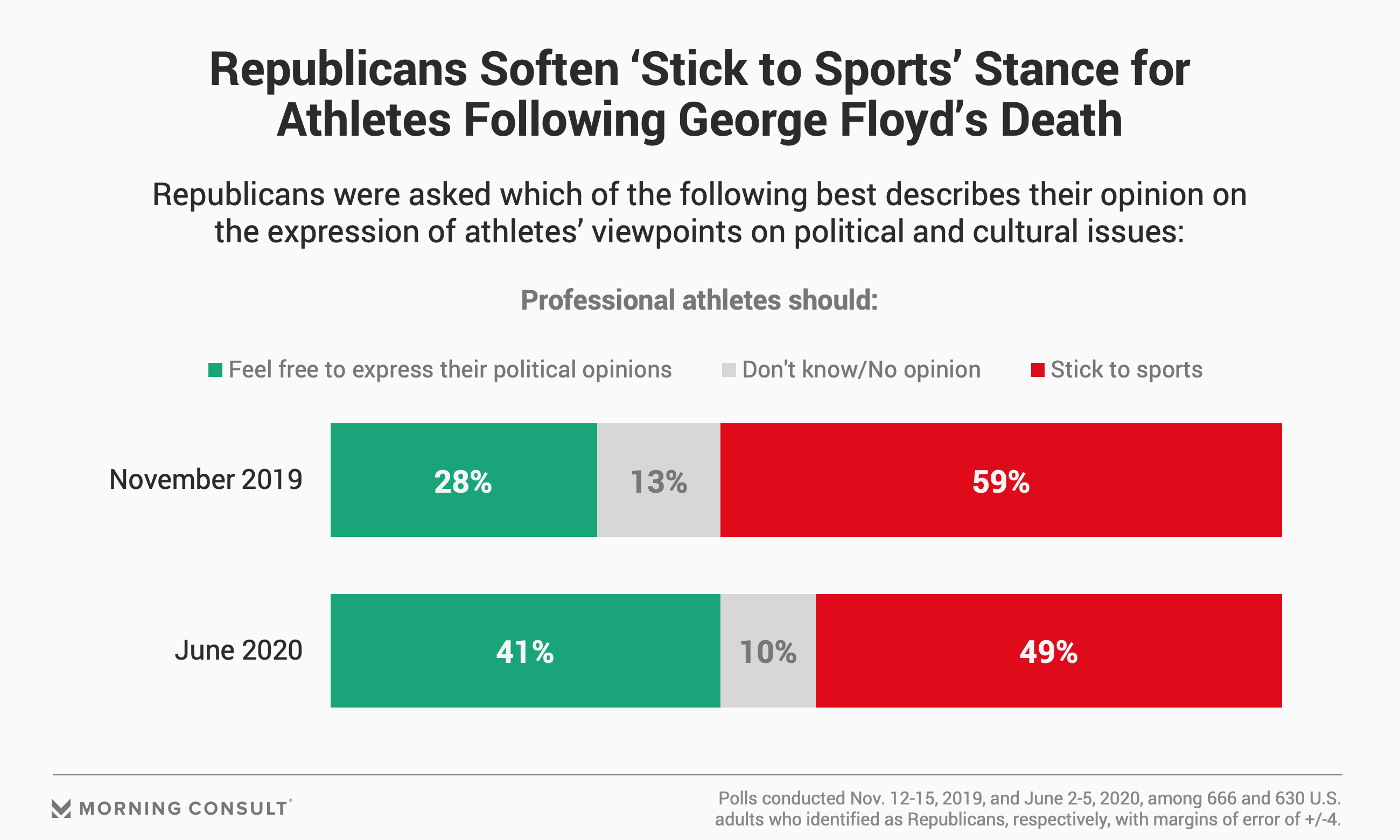 In a new poll, 41 percent of U.S. adults who identified as Republicans said athletes should feel free to express their political opinions, a slightly smaller share than the 49 percent who expressed a belief that athletes should “stick to sports.” The results reflect a significant shift since Republicans were asked the same question in November, when they were more than twice as likely to prefer athletes keep their non-sports opinions to themselves, by a margin of 59 percent to 28 percent.

Among the broader population, 58 percent of U.S. adults believe athletes should feel free to voice their non-sports opinions, an increase of 11 percentage points from the November poll. Support among Democrats is also up 10 points, to 75 percent.

Both polls were conducted among 2,200 U.S. adults with a 2-point margin of error.

Trump resumed his campaign against kneeling, after New Orleans Saints quarterback Drew Brees walked back a comment of his own in which he said he would “never agree with anybody disrespecting the flag.” Brees, who was asked about the possibility that players would kneel during the upcoming season in response to Floyd’s killing, faced blowback from prominent black athletes for his comments, including several Saints teammates.

Shortly after Trump’s anti-kneeling tweets, the NFL released a video in which Commissioner Roger Goodell apologized for “not listening to NFL players earlier” and encouraging all to “speak out and peacefully protest.” It’s unclear whether or not the timing of Goodell’s statement was related to Trump’s comments, as a group of NFL players had previously called for a mea culpa from the league for previously “silencing our players from peacefully protesting.”

Floyd’s death and the ensuing Black Lives Matter demonstrations across the country have inspired an outpouring of commentary from athletes louder than any in recent memory and perhaps since the proliferation of social media. In addition to figures such as LeBron James, Stephen Curry, Colin Kaepernick and Eric Reid, who all opine regularly on race-related topics, athletes who generally avoid touchy subjects are speaking out in support of the black community. 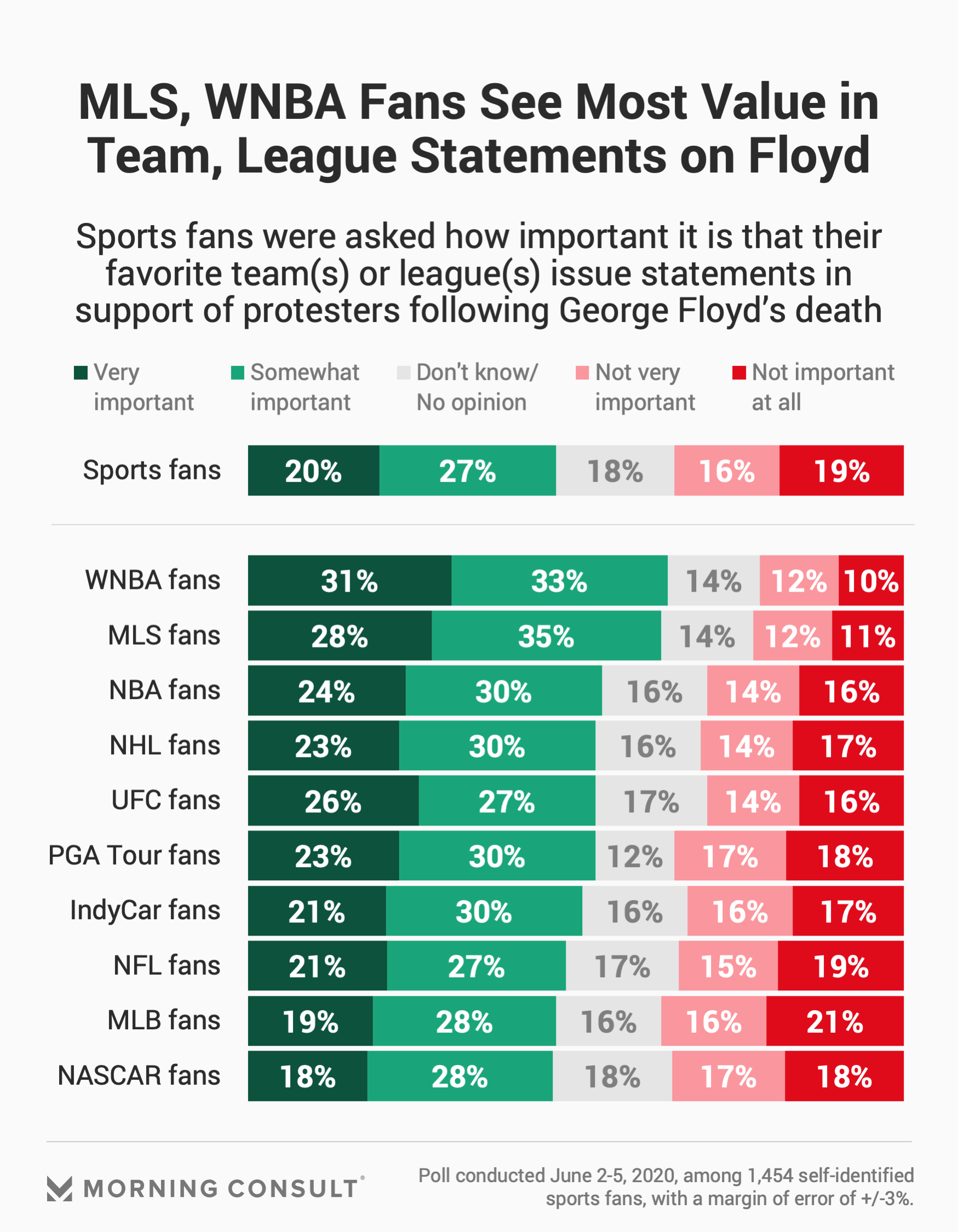 Most top-tier professional sports organizations in North America have released statements responding to Floyd’s death, and those that have refrained have come under scrutiny from some media and fans. New York Knicks and Rangers owner James Dolan’s assertion in an internal memo that it is not the role of a sports and entertainment organization to weigh in on hot-button social issues almost certainly garnered more attention than any statement in support of racial equality would have.

Forty-seven percent of sports fans in the June 2-5 poll said it was “very” or “somewhat” important that their favorite sports team or league express support for protesters of racial inequality following Floyd’s death. WNBA and MLS fans were most vehement about statements from the teams and leagues, with 64 percent and 63 percent, respectively, saying it was important to them that they speak out.

A larger share of Hispanic sports fans (62 percent) said it was important to hear from their favorite sports team or league about racial injustice in the wake of Floyd’s death than either black fans (60 percent) or white fans (41 percent). Sixty percent of Democratic sports fans wanted their favorite team or league to support the protesters, while independent fans (40 percent) and Republican fans (36 percent) placed less value on team statements.

With Election Day about five months away, the question of how outspoken sports figures and entities should be about their political viewpoints is expected to become even more relevant. More than half of all adults and 60 percent of sports fans agree that athletes should feel free to publicly express support for a specific political party or candidate.