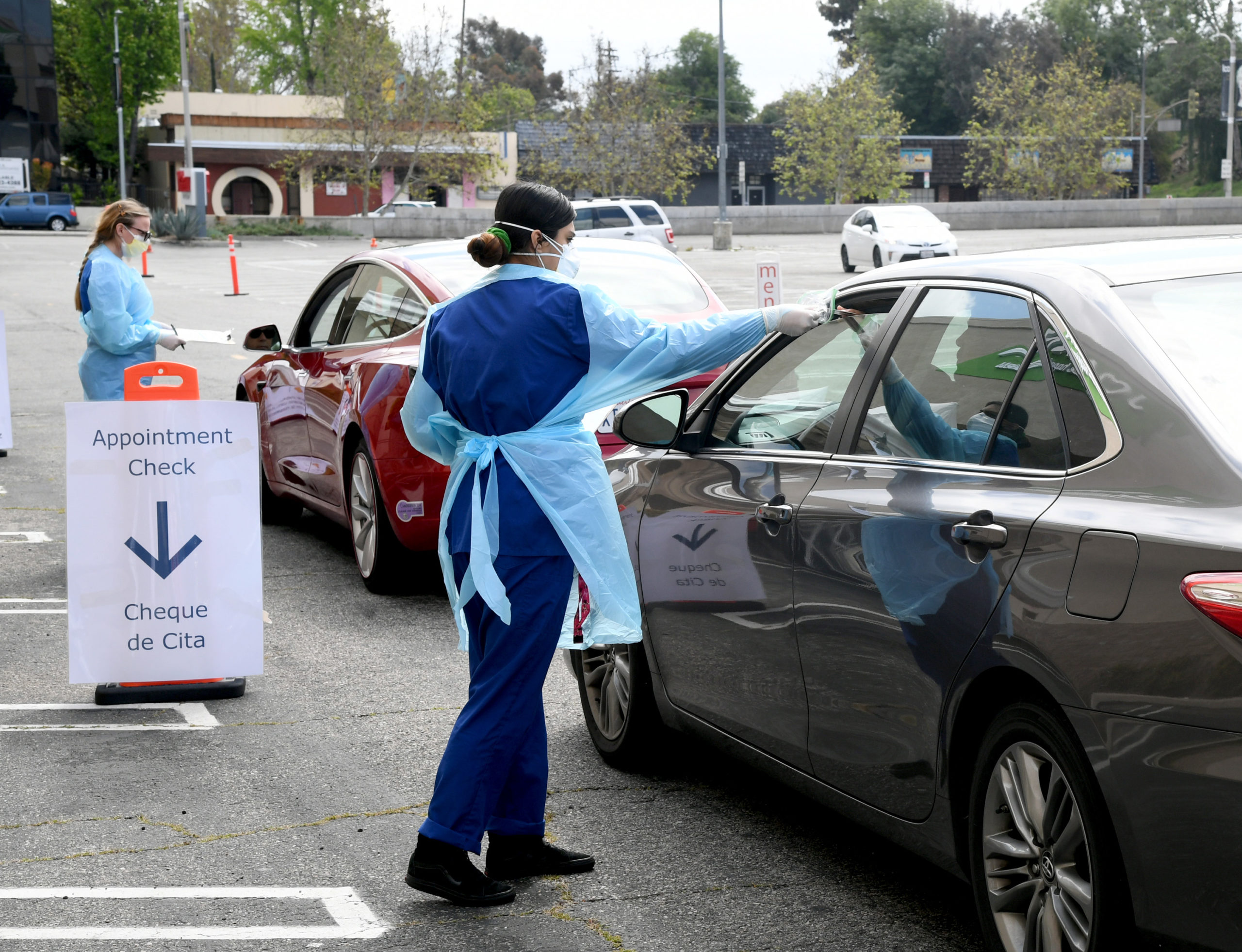 Workers wearing personal protective equipment gather coronavirus tests at a drive-thru testing clinic at the Westfield Fashion Square on April 13, 2020 in Los Angeles. Eighty-seven percent of climate-concerned adults said they would be likely to take a coronavirus diagnostic test if they suspected they had been exposed to the virus, and 76 percent said the same about an antibody test, according to Morning Consult polling. (Kevin Winter/Getty Images)
By Lisa Martine Jenkins

Americans who are unconcerned about climate change are less likely to be willing to undergo diagnostic and antibody testing for COVID-19 than those who are, new Morning Consult data shows. But majorities of both groups expected they would take the tests if they were potentially exposed to the virus.

In a poll conducted May 26-29, 87 percent of climate-concerned adults said they would be likely to take a coronavirus diagnostic test if they suspected they had been exposed to the virus, and 76 percent said the same about an antibody test (which have had reliability concerns). Meanwhile, of the climate-unconcerned group, 71 percent would take a diagnostic test and 55 percent would take an antibody test. 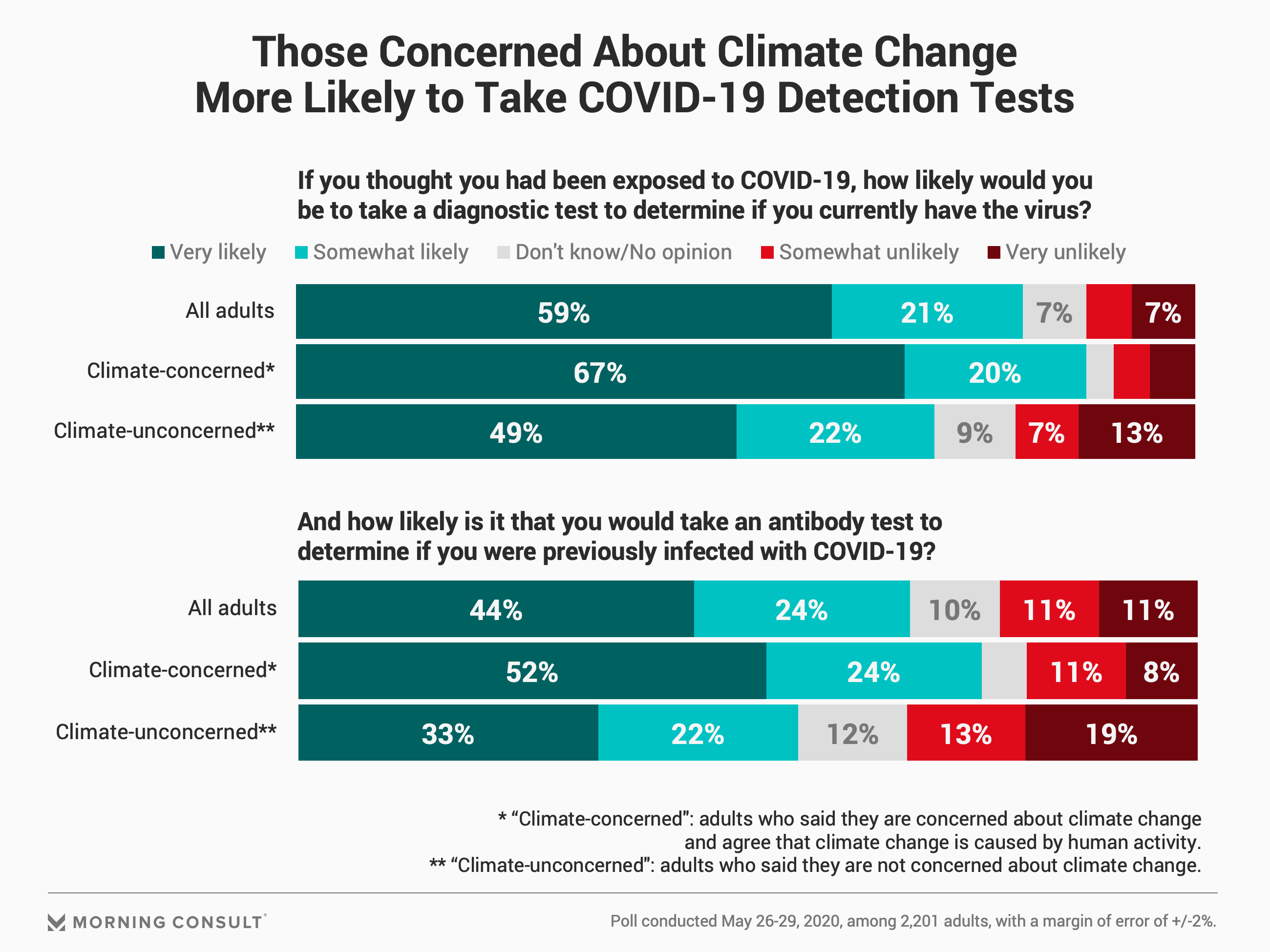 The poll surveyed 2,201 U.S. adults and has a 2-point margin of error. The climate-concerned and climate-unconcerned cohorts have 3- and 4-point margins of error, respectively. 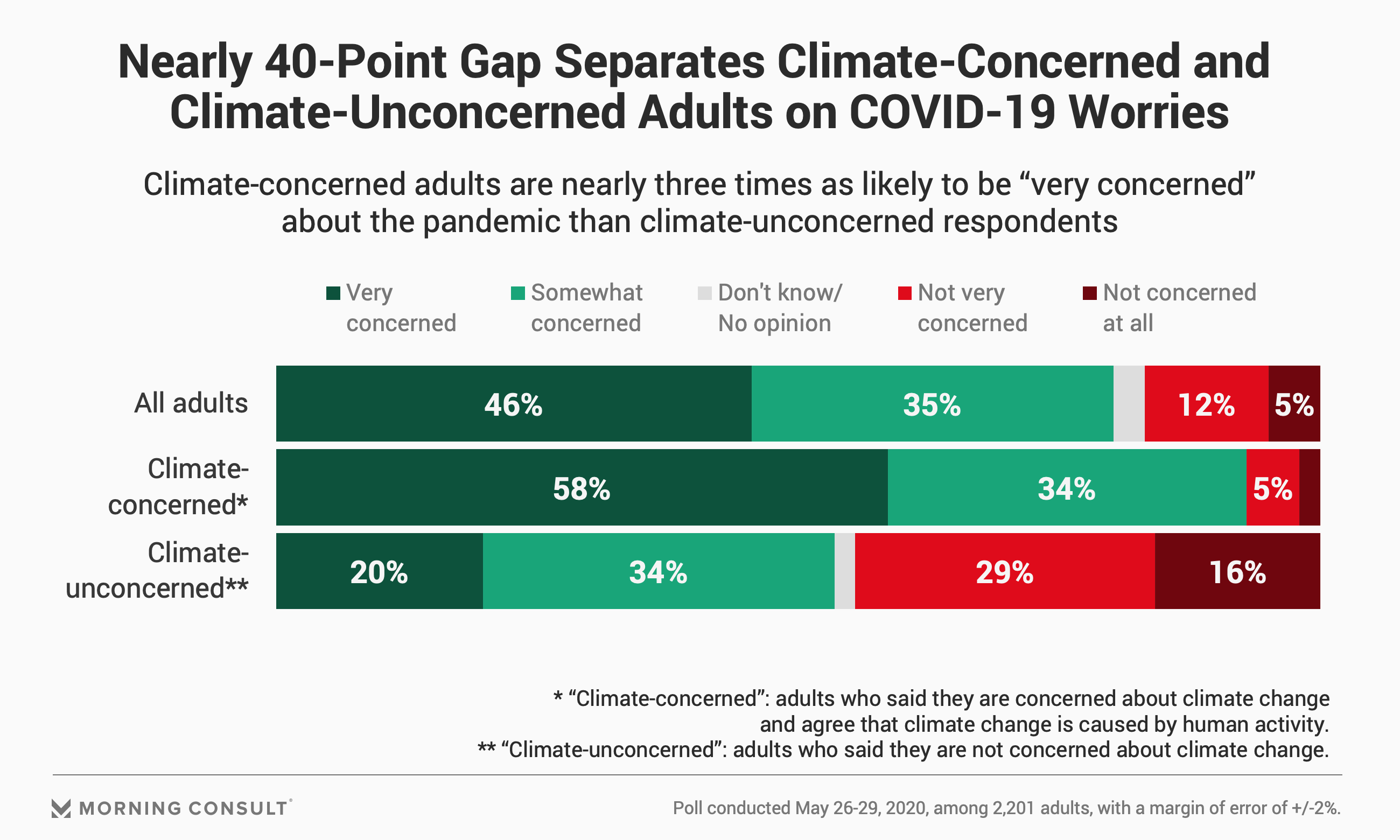 The division between the two groups mirrors the results of Morning Consult’s polling in April, which found that climate-unconcerned adults are less likely than the public to be taking actions like wearing masks and social distancing to combat the spread of the coronavirus. At the time, experts traced the discrepancy between the two groups to a combination of science skepticism and personal autonomy concerns. And in many cases, they said, the divide between the two groups is largely partisan. The late May poll found that 90 percent of Democrats were “very” or “somewhat” concerned about climate change, as compared with 51 percent of Republicans.

However, the virus-related partisan divide has sharpened over the course of the pandemic, said Salil Benegal, a political science professor at DePauw University who has focused on the public’s understanding of science, especially on issues like climate change and vaccines.

A March 13-16 poll conducted in light of President Donald Trump’s invocation of emergency powers to fight the pandemic found 49 percent of Democrats and 35 percent of Republicans were “very” concerned about coronavirus spread. By comparison, a June 5-7 poll found that the gap had widened to 32 points: 72 percent for Democrats and 40 percent for Republicans.

Benegal cited the president’s assertion last month that a positive test for one of Vice President Mike Pence’s aides showed “why the whole concept of tests aren’t necessarily great.” Later that day, the president said testing is not necessary, and seemed to express a reluctance to expand the number of tests offered.

Dr. Mona Sarfaty, a physician and the director of the program on climate and health in the George Mason University Center for Climate Change Communication acknowledged the partisan divide between the two groups, which she attributed partially to misinformation from conservative media outlets. However, she also pointed out that focusing too much on the discrepancy belies the fact that huge majorities of both groups would get diagnostic tests, which is crucial to mitigating the spread of the coronavirus.

“We’re working against the backdrop in which there’s a percentage of people who don’t get preventive services,” she said, citing that flu vaccine coverage rarely rises above 60 percent annually and 65.3 percent of women 40 and over have had a mammogram in the past two years, despite evidence that regular monitoring prevents breast cancer.

“I think we’re working against some very complex underlying realities,” Sarfaty added. “We’re dealing with some limitations that shape the uptake of these services and the interest in them,” which include factors like lack of time, fear and affordability.