But analysts say better marketing, stronger content could help it find its footing 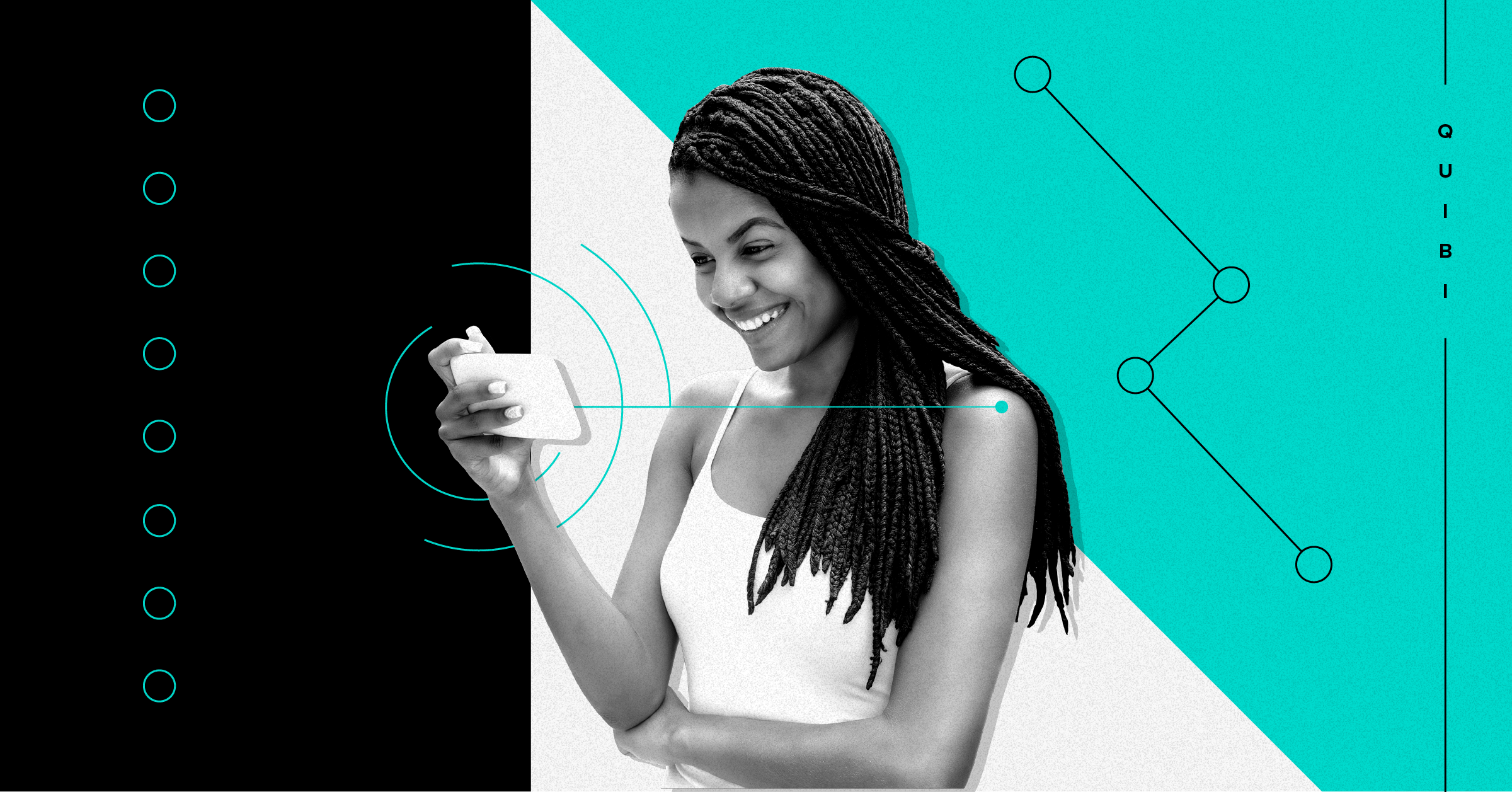 But pandemic aside, new polling finds that many of the features that Quibi touts, such as shorter programing and daily news summaries, do not top consumers’ must-have lists, per a new Morning Consult poll. And some of the most sought-after aspects of a streaming service, such as being able to binge shows and watch programming on their TV, aren’t marquee features.

Some experts, however, believe that Quibi still has time to shift gears and become a player in the streaming world, especially as consumers venture outside their homes and away from their TV sets. 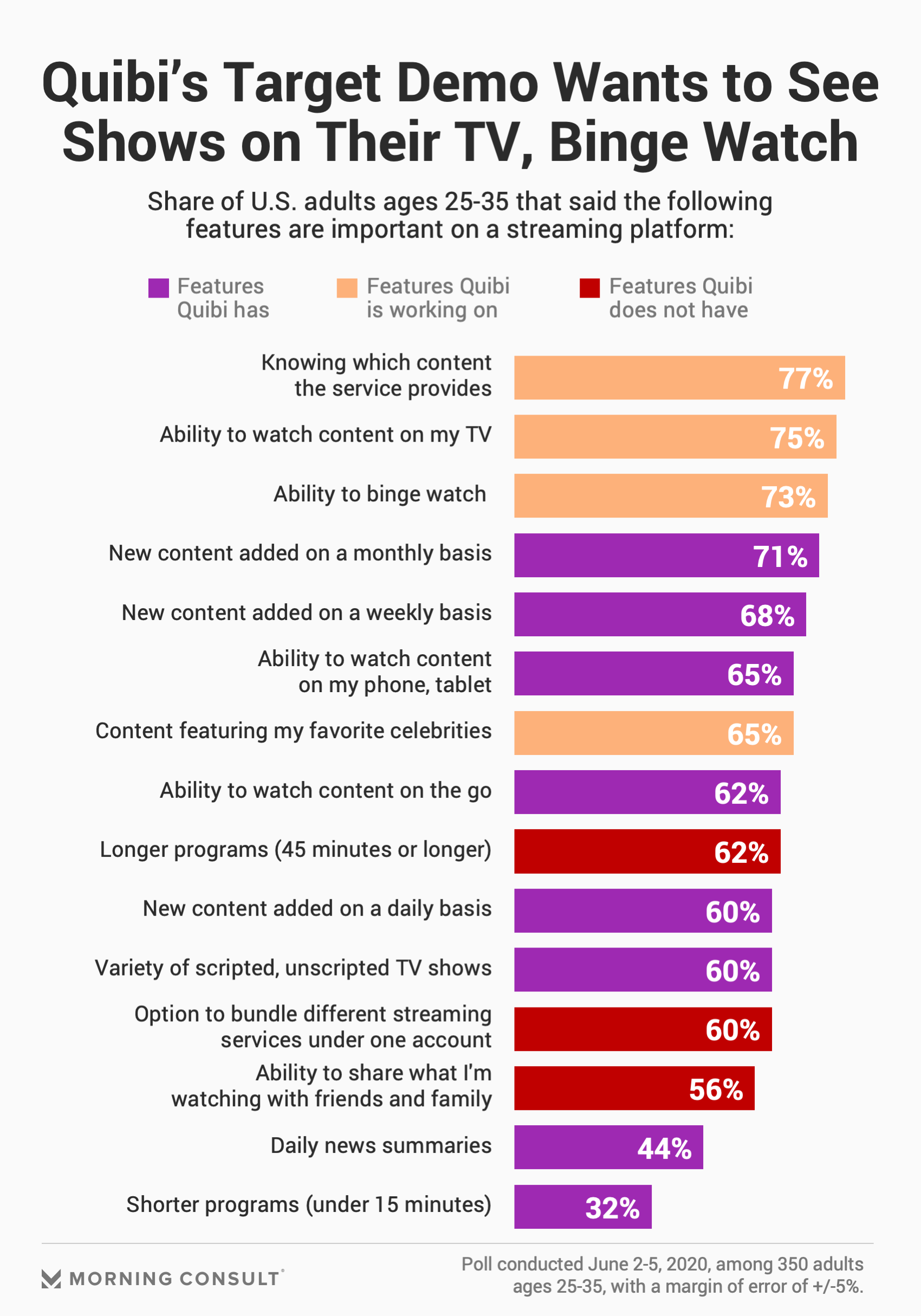 The most important element streaming platforms can have is informing viewers what exactly they can watch — something analysts say Quibi has struggled to communicate to potential subscribers.

“The ads are too vague,” said Ross Benes, a senior TV and video analyst with eMarketer, adding that details about the service’s content, price and mode of watching were not made clear to consumers.

“You’ve got more concrete examples with the other streaming services,” he said, pointing to Hulu and Disney+, although a May 2020 survey found that HBO Max’s promotions, which heavily displayed available content, have not necessarily created more awareness of its offering.

Respondents also placed importance on being able to watch a streaming service’s programming on a television, rather than a mobile device. Three quarters of those ages 25-35, which Quibi co-founder and Chief Executive Meg Whitman described as Quibi’s target audience, said watching via television was important, as did 73 percent of the broader population.

The new survey was conducted June 2-5 among 2,200 U.S. adults and has an overall margin of error of 2 percentage points, while the 25- to 35-year-old demographic has a 5-point margin of error.

Quibi, which did not respond to a request for comment, positioned itself as a mobile-first service. But weeks after its launch, and amid many states’ stay-at-home orders, the platform confirmed that it was working to roll out casting abilities for iPhone and Android users so that users could cast Quibi originals from their phone to their TV.

But that’s not enough, said Benes in a follow-up email.

“Far more people use Roku or Fire TV than they do casting services,” he said, adding that having a presence on major connected TV platforms is crucial for streaming services.

In a New York Times interview, Katzenberg attributed Quibi’s woes to the fact that the service debuted during the pandemic, when consumers were at home in front of their televisions and not watching mobile content on the go.

But analysts differ on whether a return to normalcy will be Quibi’s saving grace.

Brad Gastwirth, chief technology strategist with Wedbush Securities, doesn’t think that the reopening of the country will be a magic fix for the platform, or even result in a surge of new subscribers. Steve Nason, director of research at Parks Associates, offered a different take: Reopening could present Quibi with the time to retool and launch a marketing campaign that will attract more subscribers within its target demographic.

“Depending on what happens with colleges and universities and people going back to work, it seems like late summer may be a good sweet spot for a lot of that traction to happen,” he said.

Using their plentiful financial resources to reintroduce the service could present Quibi with the opportunity to correct course, and stay in the game for a while longer.

All three analysts interviewed for this story suggested that Quibi could establish itself more firmly in the streaming ecosystem through a mix of hit shows, partnerships and stronger marketing.

“They need to market better,” according to Gastwirth, who also said Quibi’s approach of targeting consumers between the ages of 25 and 35 is “a little flawed,” and that “it makes more sense to have a broader age group or defined age group to target.”

Nason said it would be wise for Quibi to run a multi-tiered, multi-channel marketing strategy that explains the service’s name, what the service is and how it works. He also reinforced that content is king and that Quibi needs movies and TV shows that make it valuable enough for a consumer to pay a monthly subscription, a point echoed by Benes.

“They need a hit. They need to get behind a show or a few shows with their marketing and get people talking about and connected to a particular show or shows,” said Benes. He cited “The Mandalorian” and “House of Cards” as hit series that became synonymous with their respective services soon after launch.

Even with Quibi’s woes, Gastwirth believes short-form subscription services can find a place on the market — if they create a high enough demand from the consumer.

“I think there’s certainly a need for it,” he said. “But there’s also a need for long-duration content, and not everything is created equal. Everything is predicated on content and if the content isn’t exciting or interesting to the subscriber then unfortunately that service won’t do that well.”