Biden’s widening his lead among black and Hispanic voters, as well as with young people and liberals

A woman raises her fist Monday as demonstrators gather for the NAACP's March On Georgia protesting the police killing of Rayshard Brooks on June 12. Polling shows former Vice President Joe Biden is consolidating his support among voters of color, particularly amid protests against police that have gripped the nation since the May 25 killing of George Floyd in Minneapolis. (Dustin Chambers/Getty Images)
By Eli Yokley

A new Morning Consult poll finds former Vice President Joe Biden with his biggest lead over President Donald Trump so far this year, as voters warmed to the presumptive Democratic presidential nominee’s handling of the demonstrations sparked by the killing of George Floyd and soured on Trump’s response to the coronavirus pandemic.

Biden leads Trump by 9 percentage points nationwide, 48 percent to 39 percent, according to a June 8-14 poll of 32,138 registered voters. That margin is statistically similar to the 8-point lead he held over the Republican incumbent last week, since both polls have a 1-point margin of error. 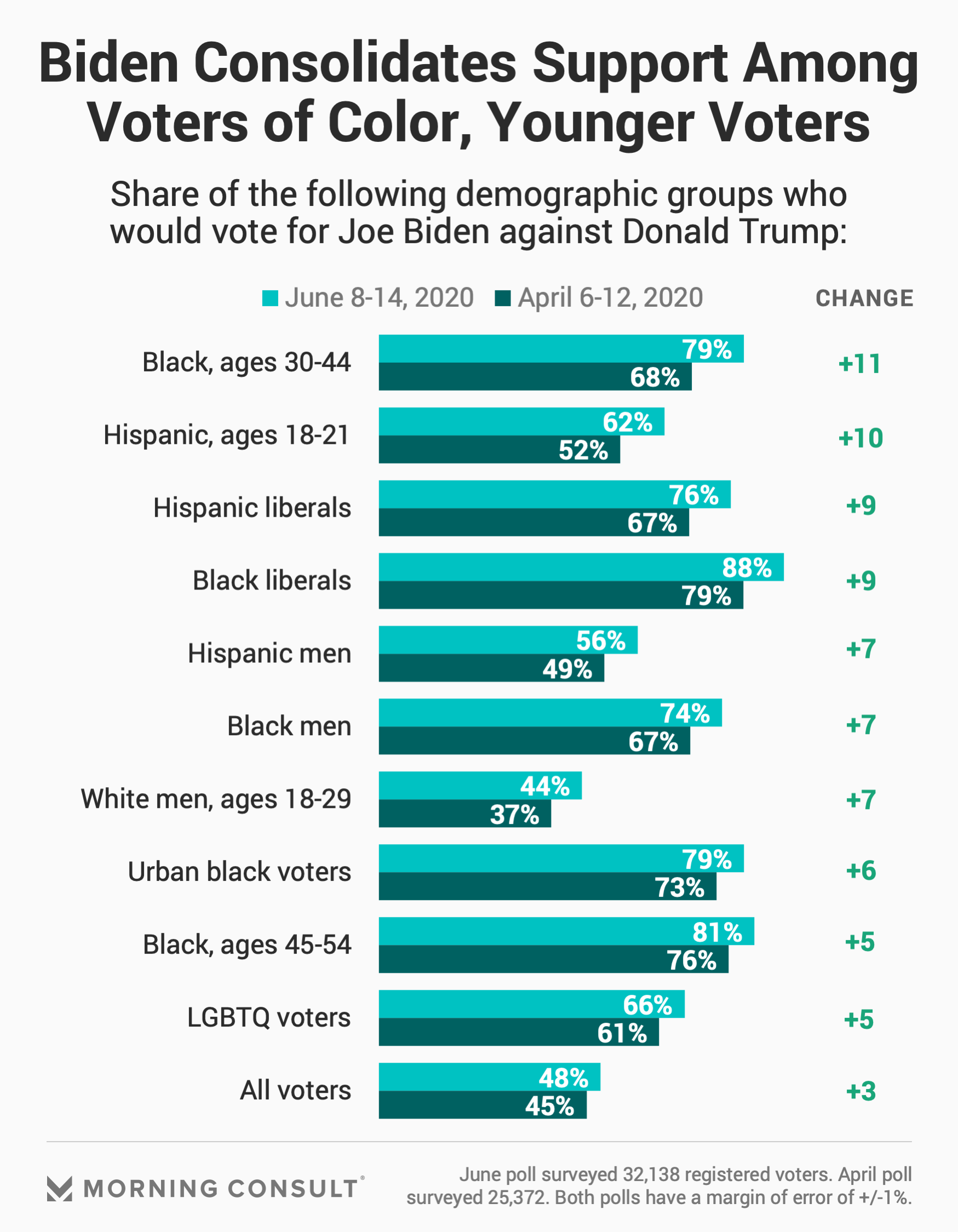 While Biden’s fortunes are improving among voters from across the board, the starkest gains are coming from a consolidation of Americans whose turnout will be critical in November: younger, progressive voters of color and their white peers.

Since a poll conducted April 6-12, the week that Sen. Bernie Sanders (I-Vt.) dropped out of the Democratic presidential race, Biden has improved by double digits among black voters ages 30-44 and Gen Z Hispanic voters, ages 18-21. He has also made notable improvements among Hispanic men, black men and Hispanic or black self-described liberals. Along with increases in support among white men ages 18-29, Biden appears to be consolidating the kind of voters who favored Sanders during the primary.

Among the more than 200 demographic groups detailed in the survey, Trump made statistically significant headway with just one population: Hispanic voters ages 65 and older, though Biden still leads among the group by 12 points, 52 percent to 40 percent. And while Biden trailed Trump among white voters in that April survey by 8 points, 40 percent to 48 percent, the latest poll found him within 3 points, 42 percent to 45 percent, with the group that backed Trump with 57 percent of the vote in 2016, according to exit polls.

Trump and his campaign have pushed back on other polls showing Biden’s widening lead in the head-to-head national contest, citing the “incredible enthusiasm we are receiving.” But the numbers are joined by a similar trend in battleground state-level surveys, a concern for a president who scored an Electoral College victory in the 2016 presidential contest despite losing the national popular vote to Democrat Hillary Clinton.

The bulk of the movement came in recent weeks, as Americans took to the streets to protest following the alleged murder of Floyd by a Minneapolis police officer on May 25. Trump’s response to the events — which included advocating for troop deployments in American cities to help keep the peace and posing for a photo op at a church near the White House after authorities cleared the way by tear-gassing protesters — have mostly earned negative ratings from voters. 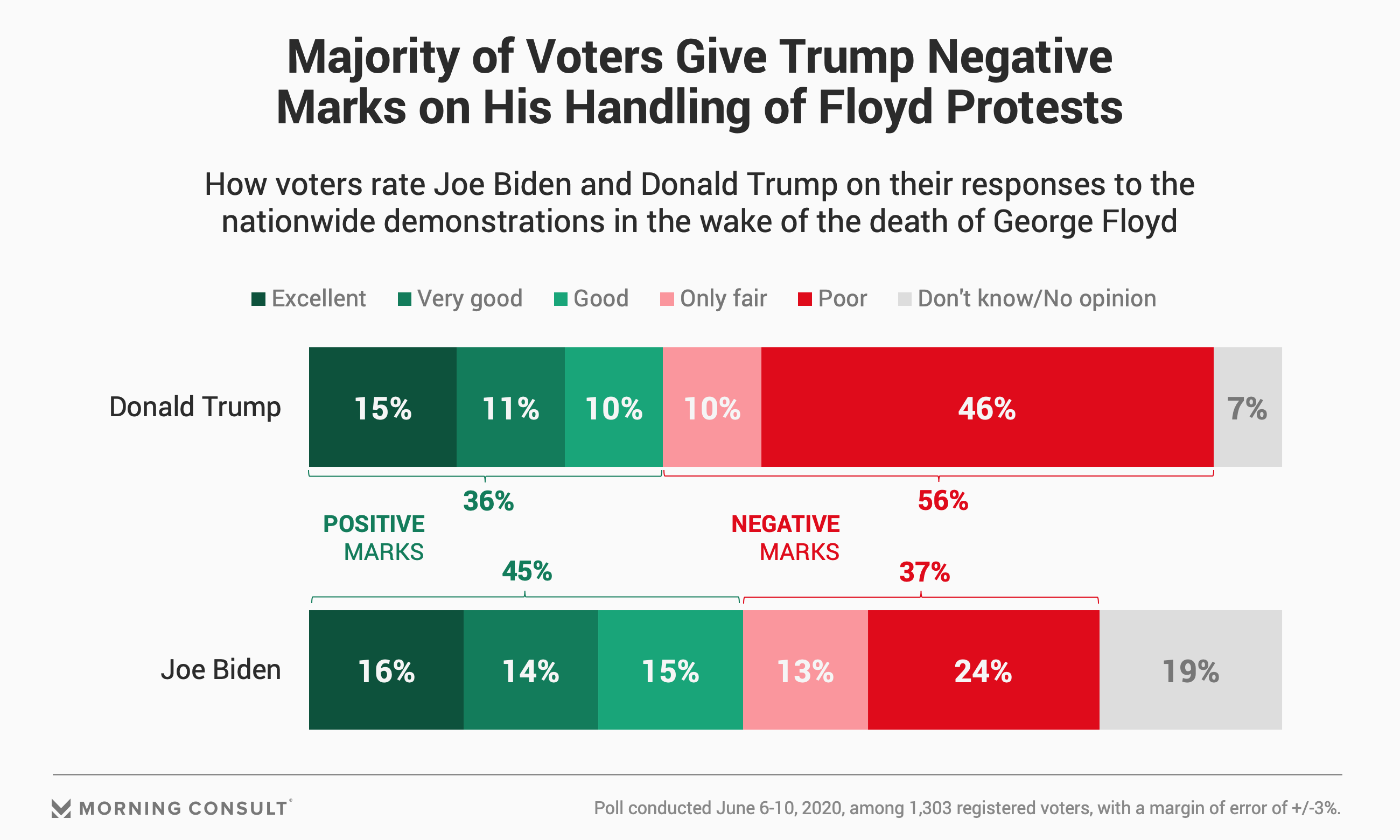 A Morning Consult poll conducted June 6-10 found a majority (56 percent) gave Trump “only fair” or “poor” marks for his handling of the demonstrations, while 36 percent said his response was “excellent,” “very good” or “good” — similar to figures measured in polls the prior week.

Meanwhile, voters are looking more favorably on actions from Biden, who spoke via video at Floyd’s funeral, appeared at a Delaware demonstration and met with black leaders, and gave a speech on race relations. Forty-five percent of voters gave Biden positive marks, up 9 points from a June 3-5 poll, while 37 percent gave him negative marks, down 7 points during the same time.

At the same time, voters are further souring on Trump’s response to the other major crisis gripping the United Statesas COVID-19 cases continue to spread amid the reopening of the economy for which he advocated. Fifty-six percent of voters in a June 12-14 survey disapproved of his handling of the spread of coronavirus, while 38 percent approved — his worst grades on the question in the roughly two dozen polls conducted since early February.