As opposition to the demonstrations during the national anthem abates, the share of people without a firm opinion is growing

Former San Francisco 49er Colin Kaepernick kneels for the national anthem before a game in October 2016. In a recent poll, 38 percent of U.S. adults said kneeling during the anthem is an acceptable form of protest, while 39 percent disagreed. (Ezra Shaw/Getty Images)
By Alex Silverman

NFL Commissioner Roger Goodell’s video apology for ignoring the message behind on-field protests against police brutality represented a seismic shift in the league’s stance on athlete activism and gave players the green light to once again use the pregame performance of the national anthem as a platform to draw attention to racial injustice.

Goodell’s 180-degree turnaround on the matter caught the attention of President Donald Trump, who has been a thorn in the league’s side on the kneeling issue since he turned public sentiment against both the players and leadership in 2017. Heading into the election and with players vowing to resume their demonstrations this fall, the league seems poised to become a political football once more.

In the wake of the alleged murder of George Floyd and the subsequent surge of the Black Lives Matter movement, new Morning Consult polling shows that a significant number of Americans who previously opposed NFL players protesting police brutality by kneeling during the national anthem don’t know what to think anymore. 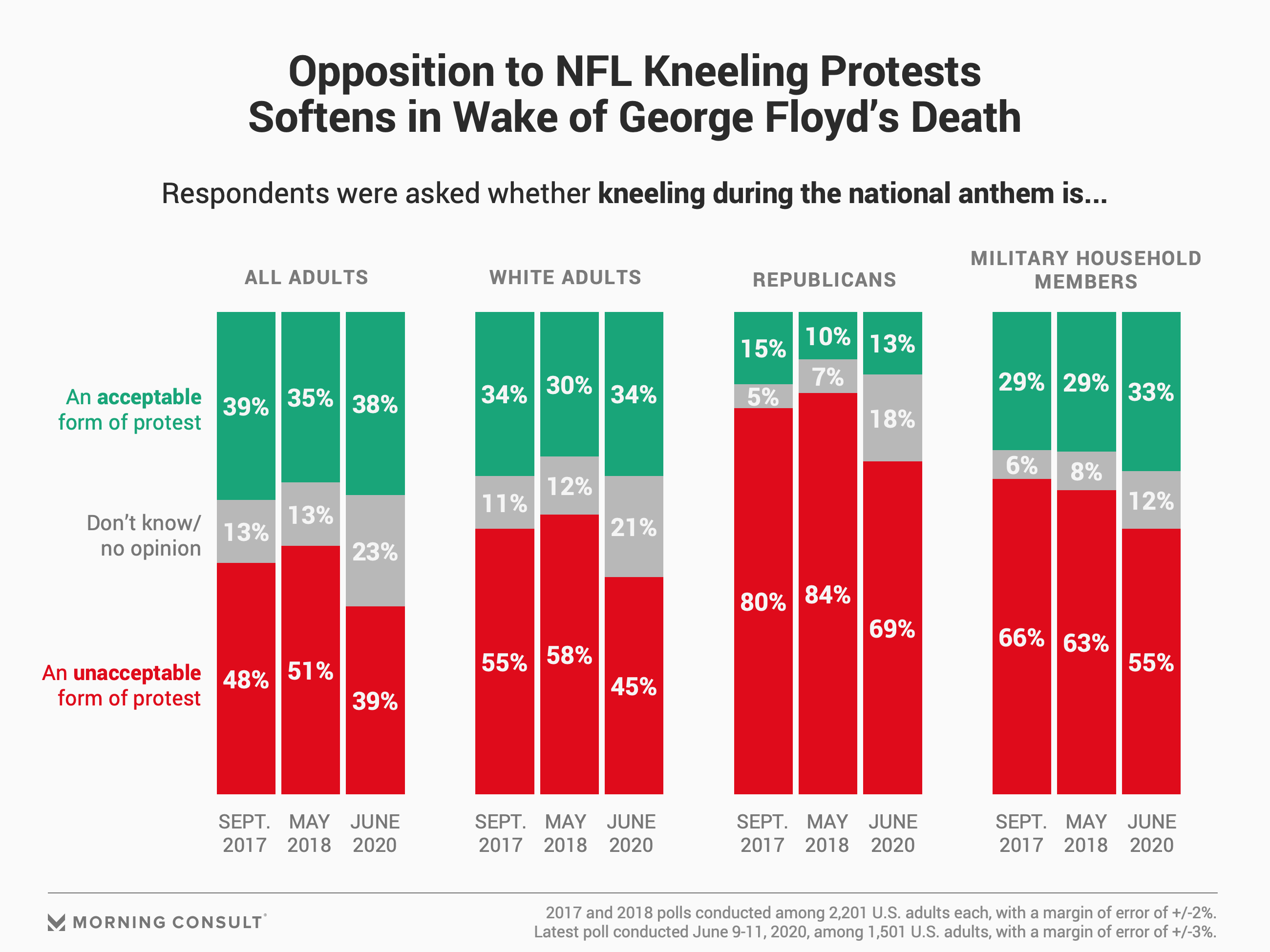 With the league’s scheduled season opener less than three months away, 38 percent of Americans believe taking a knee during the anthem is an “acceptable” form of protest, while 39 percent consider it “unacceptable.” In the June 9-11 survey of 1,501 U.S. adults, that difference is statistically negligible given the sample’s margin of error of 3 percentage points.

The virtual deadlock represents a double-digit shift from May 2018, when 51 percent of Americans opposed kneeling during the anthem and 35 percent condoned it. While support for the protests has increased by a modest 3 points, the share of adults who are either unsure or don’t have an opinion on the issue is up 10 points to 23 percent.

The abating opposition, which coincides with a surge in popularity for Black Lives Matter, and increased uncertainty indicates that critics of the protests are reconsidering their position, but haven’t made the jump to full-on support. The shift can be seen among the demographics most staunchly opposed to the demonstrations: Republicans, white Americans and members of military households. 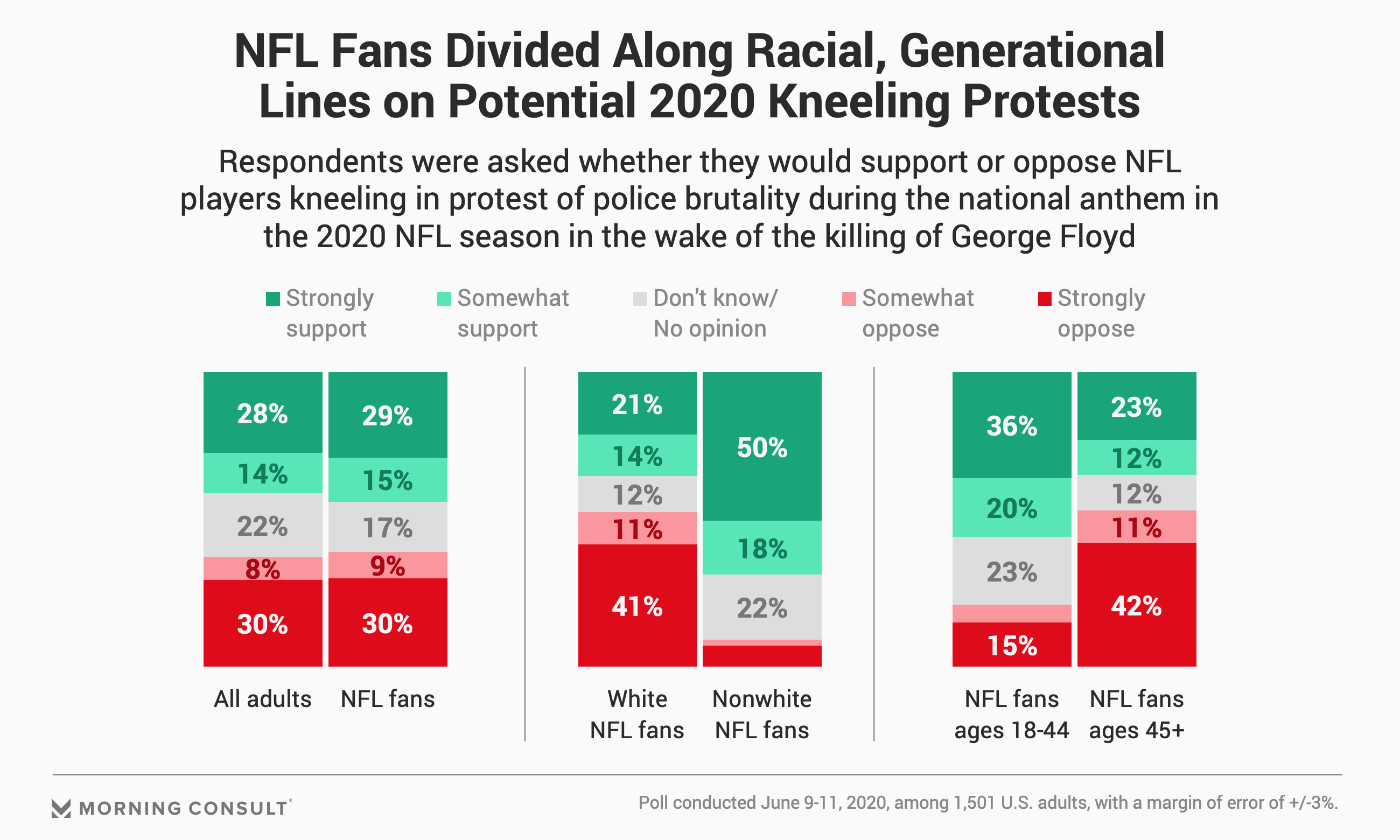 Looking ahead to the 2020 season, 44 percent of NFL fans said they would support players if they decided to resume their pregame protests in the wake of Floyd’s killing, while 39 percent said they would oppose the demonstrations and 17 percent were unsure. Among fans of the league, however, there are large chasms along racial and generational lines. Nonwhite NFL fans are about twice as likely to support the protests as their white counterparts, while fans ages 45 and older are almost three times as likely to strongly oppose the protests as fans ages 18-44.

The NFL isn’t the only sports organization having a change of heart on the kneeling issue. U.S. Soccer last week repealed a rule requiring players to stand during the national anthem, drawing consternation from Trump on Twitter and inspiring Rep. Matt Gaetz (R-Fla.), a Trump ally, to introduce legislation on June 12 that would require the men’s and women’s national teams to stand.

Trump’s crusade against NFL player protests during the national anthem tarnished the league’s reputation, especially among Republicans, which has slowly bounced back over the past few years. After Trump called out players around the start of the 2017 season, the league’s net favorability — the share of U.S. adults that view the league positively minus the share that view the league negatively — dropped from 31 points to 11 points within a two-week span. It had been as high as 55 points in May 2017 and dipped as low as 9 points in November and December that year. The league’s net favorability is currently 37 points above water. 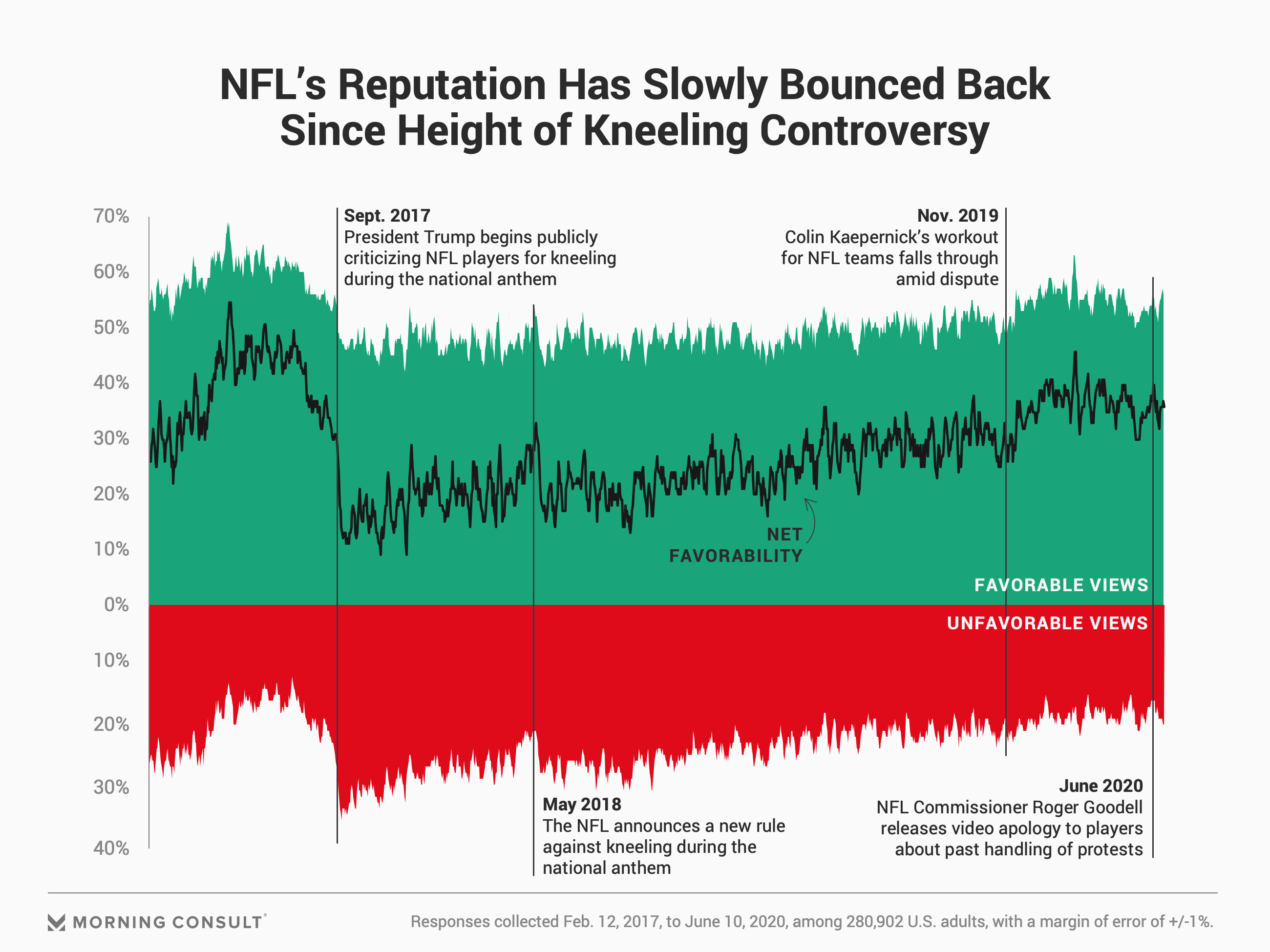