‘NCIS,’ ‘The Office’ and Daytime TV: What Each Generation Said They’re Watching During Pandemic

7% of adults overall have been watching daytime programs such as talk shows, court shows or soap operas most often. (iStock / Getty Images Plus)
By Sarah Shevenock

When stay-at-home orders went into effect in March, many Americans across the country — alone, bored and in search of entertainment — turned to their television sets. Consumers spent 142.1 billion minutes streaming TV and movies during the week of May 18, according to Nielsen, up 76 percent from 80.6 billion during the same period in 2019. And new polling and analysis shows what they were watching — and how that varies by generation.

A May 21-24 Morning Consult/The Hollywood Reporter poll asked respondents to name the TV show they had watched most often during social distancing, and then provided a blank space for them to type. Comedies and dramas proved to be the most popular overall. 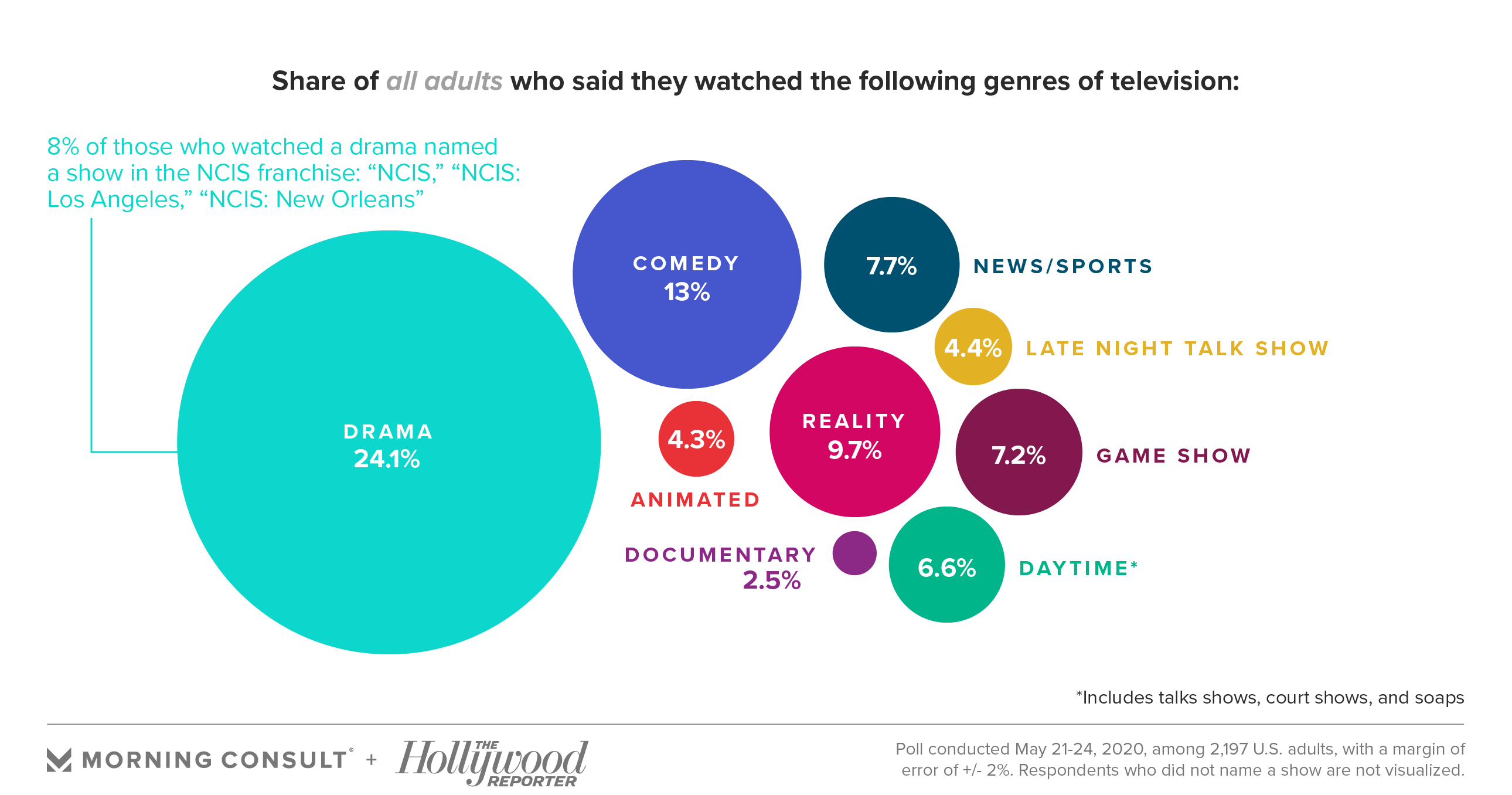 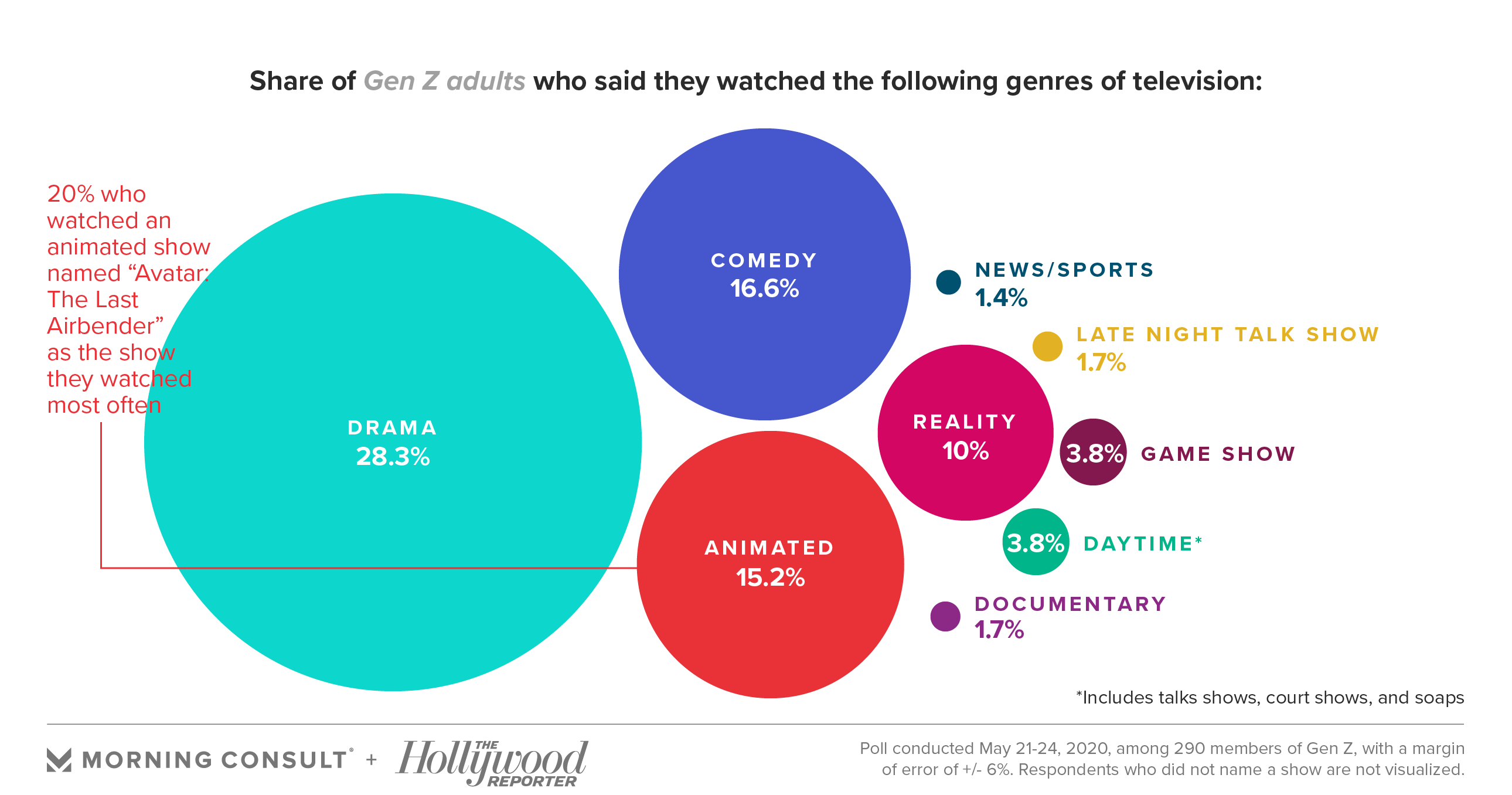 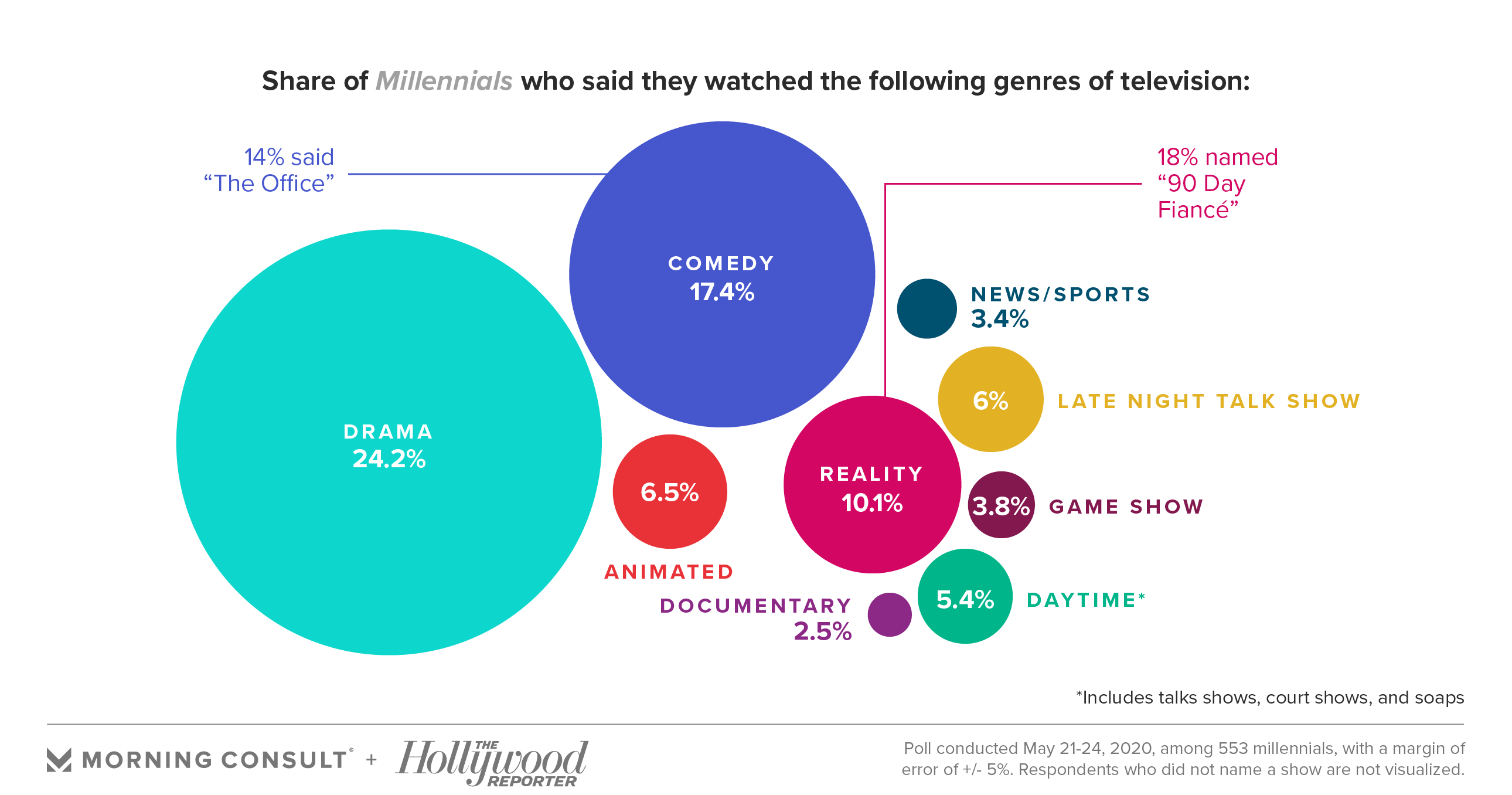 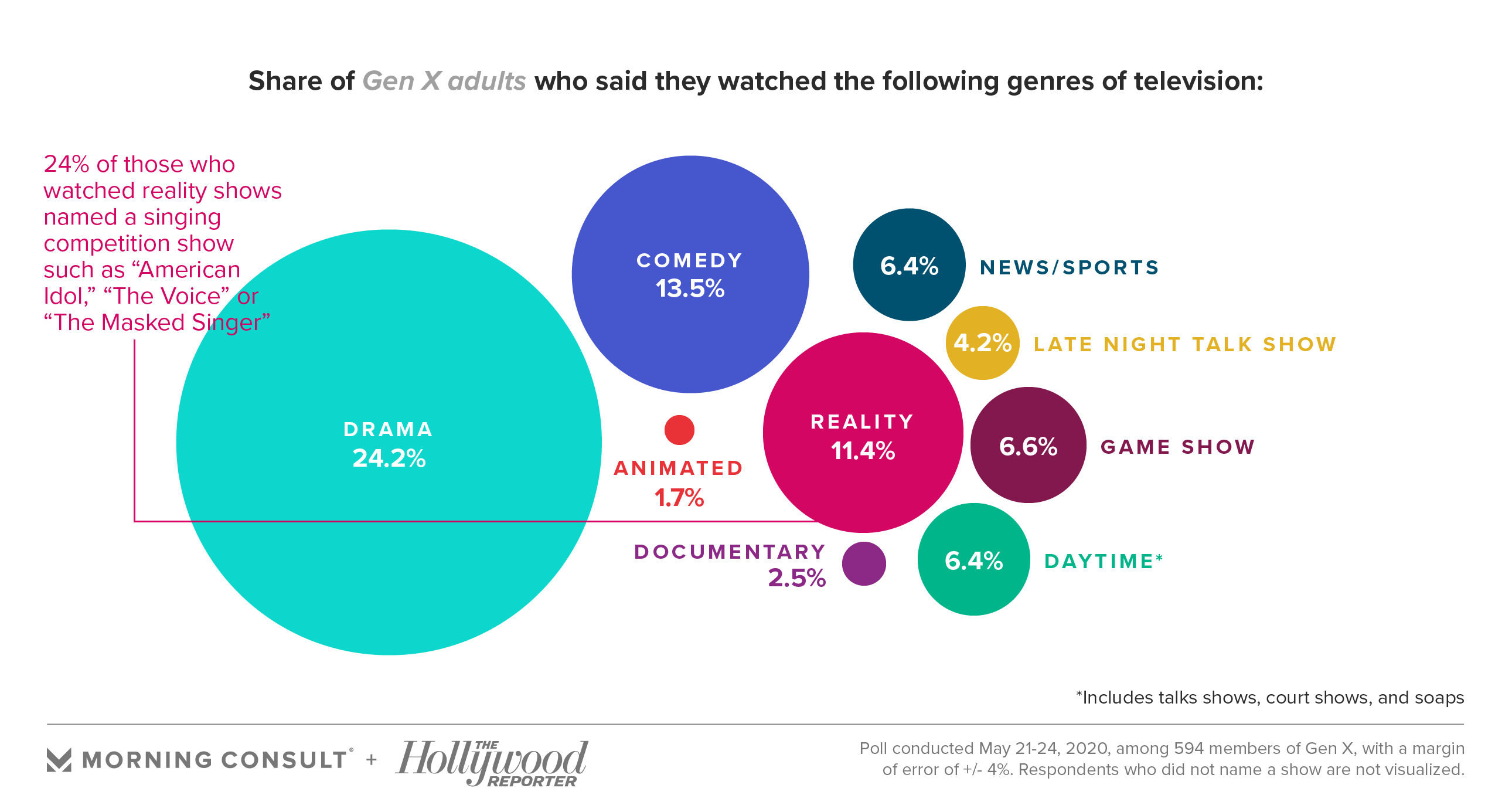 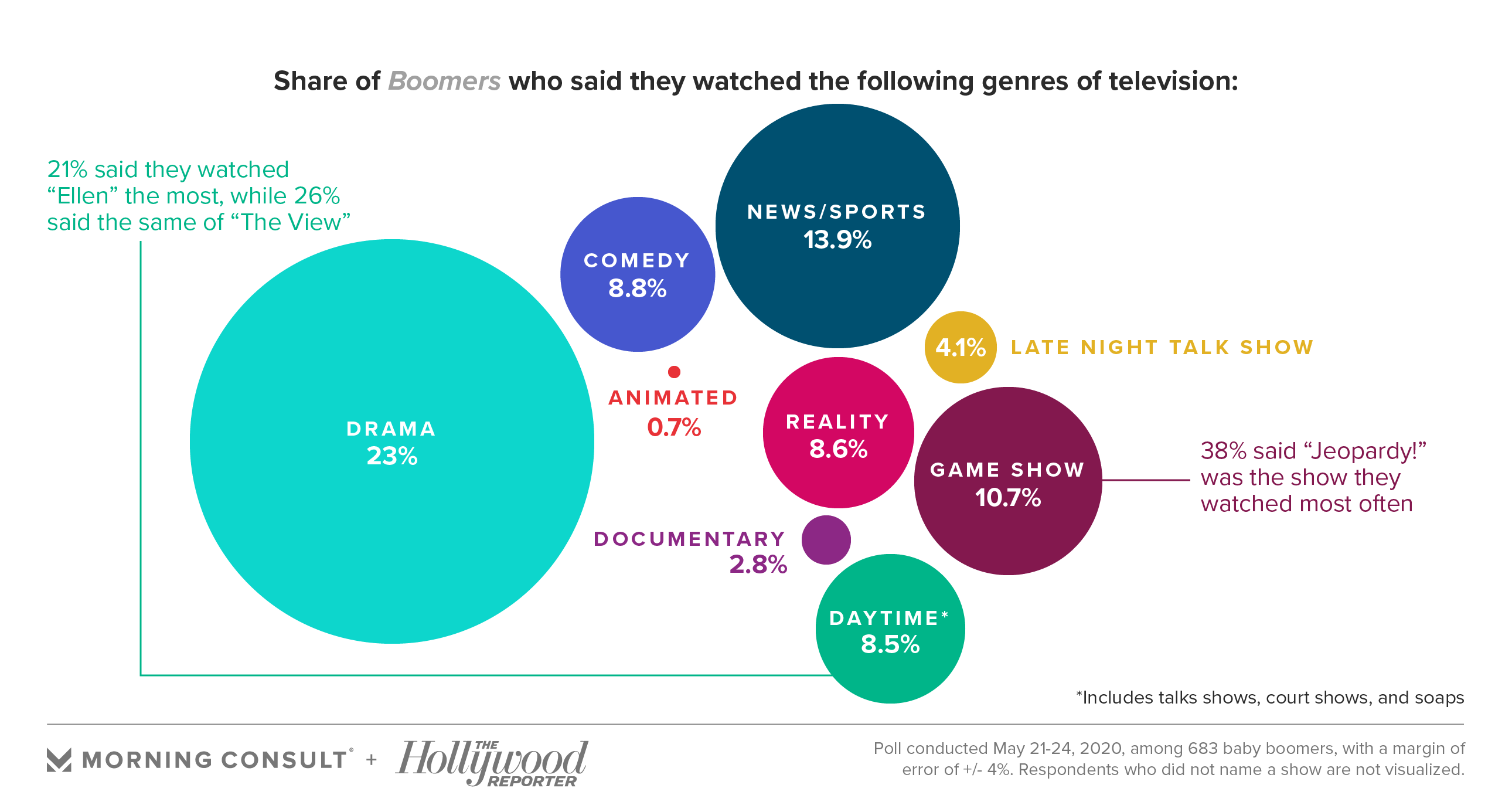 The “NCIS” franchise, a set of police procedurals airing on CBS, was the most common drama listed, while “The Office” is playing the most for comedy fans. “NCIS” was a particular favorite of baby boomers, who made up 70 percent of the respondents listing the show. “The Office” was loved by all generations, though millennials were the most likely to list it.

With more people stuck at home, Nielsen reported an increase in daytime viewing among children and adults, with viewership among those ages 25-54 up by roughly 50 percent between 11 a.m. and 12 p.m. In the recent poll, roughly 7 percent of the 2,197 U.S. adults surveyed named a daytime television program, including soap operas and talk shows like “The View.” “Ellen” proved to be a favorite overall: One-third of those who watch daytime television named the comedian’s talk show.

A separate June 2-5 Morning Consult survey found that two-thirds of adults who have been working from home watch television during the work day. Among those respondents, nearly half (47 percent) said they keep the TV on to keep up with the day’s events. One-third of adults said they use the television as background noise while working.

Animated programs were a favorite among Generation Z, with 15 percent of the youngest adult generation saying they’ve watched programs such as “Avatar: The Last Airbender,” “The Simpsons” or “Rick and Morty” while social distancing. According to Nielsen, “Avatar: The Last Airbender” was the most-viewed Netflix Inc. program on mobile the week of May 11, with users spending 1,250.8 million minutes watching the program.

Related: Before and During Pandemic, Animated Films Find Success on Video-On-Demand

Millennials, along with Gen Z, were looking for laughs, with around 17 percent of each demographic respondents naming live-action comedies such as “The Office” and “Friends” as the shows they watched most frequently. “Friends” is now exclusively available on WarnerMedia’s HBO Max streaming service, after leaving Netflix Inc. at the end of last year, but just 13 percent of consumers knew it was available on the service as of a May poll. “The Office” is slated to leave Netflix at the end of 2020, and will stream on Comcast Corp.’s Peacock starting in 2021.

Reality TV was a favorite for Generation X: Eleven percent said they were watching shows such as “90 Day Fiancé,” “Survivor,” “The Masked Singer” or the now-canceled “Live PD.”

And game shows were must-see TV for 11 percent of baby boomers. “Jeopardy!” in particular was popular, with 38 percent of game-show watchers saying the Alex Trebek-hosted quiz show was what they were watching while social distancing. They may have to wait a while for new episodes, though, as “Jeopardy!” aired its last new program on June 12.

The Gen Z and millennial demographics have respective margins of error of 6 and 5 percentage points, while the boomer and Gen X groups each have a 4-point margin of error.

The demographic of those who watch TV while working has a margin of error of 5 points.