As nationwide protests against police brutality continue in the wake of the alleged murder of George Floyd, police and detective television shows are facing new scrutiny for the role they play in furthering societal perceptions about law enforcement and criminals. And new Morning Consult polling offers a look at how Americans view policing on television, including which shows they believe depict police most accurately. 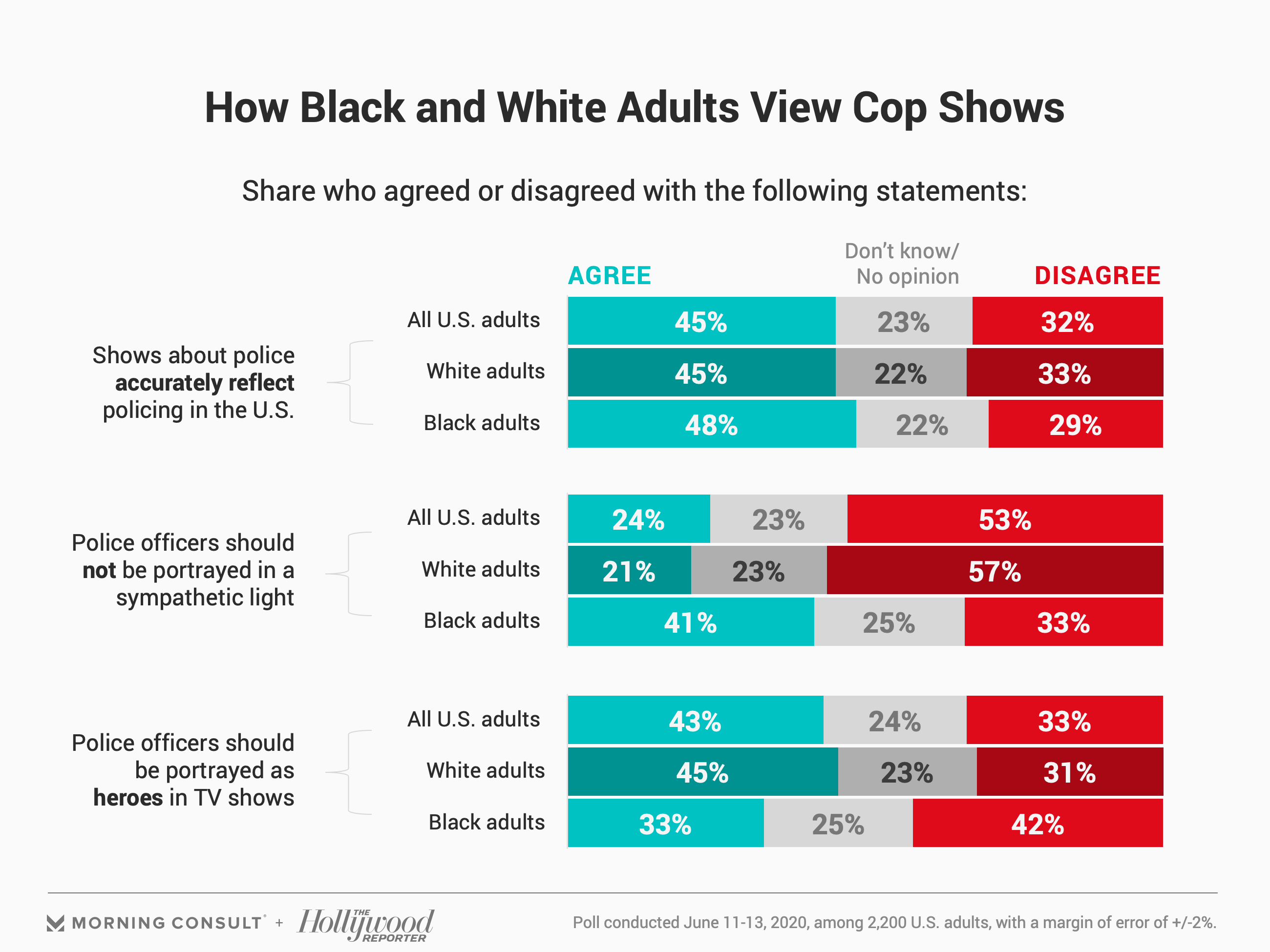 Those surveyed were also asked how they thought law enforcement should be viewed on television. Forty-three percent of adults — including 45 percent of white respondents and one-third of black adults — said that police officers should be portrayed as heroes in TV programs. Black adults were nearly twice as likely (41 percent) as white adults (21 percent) to say that law enforcement officers should not be depicted in a sympathetic light.

“Cops,” the long-running reality show that Paramount Network canceled on June 9 in the midst of surging support in public opinion for the Black Lives Matter movement, provided the most accurate depiction of police, according to 52 percent of adults. For black respondents, more than half (55 percent), said the scripted drama “Law and Order: Special Victims Unit” came closest to reality. Forty-one percent of all respondents and 44 percent of black adults found “Live PD” — which has also been canceled after filming the death of a man in police custody and destroying the footage — to be an accurate representation of policing in the United States.

Related: As COVID-19 Continues, Audiences Are Embracing the Intimacy of Remote TV Shows

Reality programs and scripted dramas about law enforcement have faced criticism over the years for the way they depict policing. A January study from the nonprofit organization Color of Change, which analyzed dynamics and wrongful actions in 353 episodes of 26 scripted, crime-related TV series, found that cop shows rarely depict law enforcement’s disproportionate targeting of black people or systematic bias overall. CBS’ police procedural “Blue Bloods” performed particularly poorly, per the analysis, with criminal justice professional characters committing more wrongful actions than any other show included in the study.

In 2019, documentary filmmaker Dan Taberski launched a podcast, based on an 18-month investigation into “Cops,” about the show’s alleged display of “excessive force as good policing” and reinforcement of “racial stereotypes about criminality.” 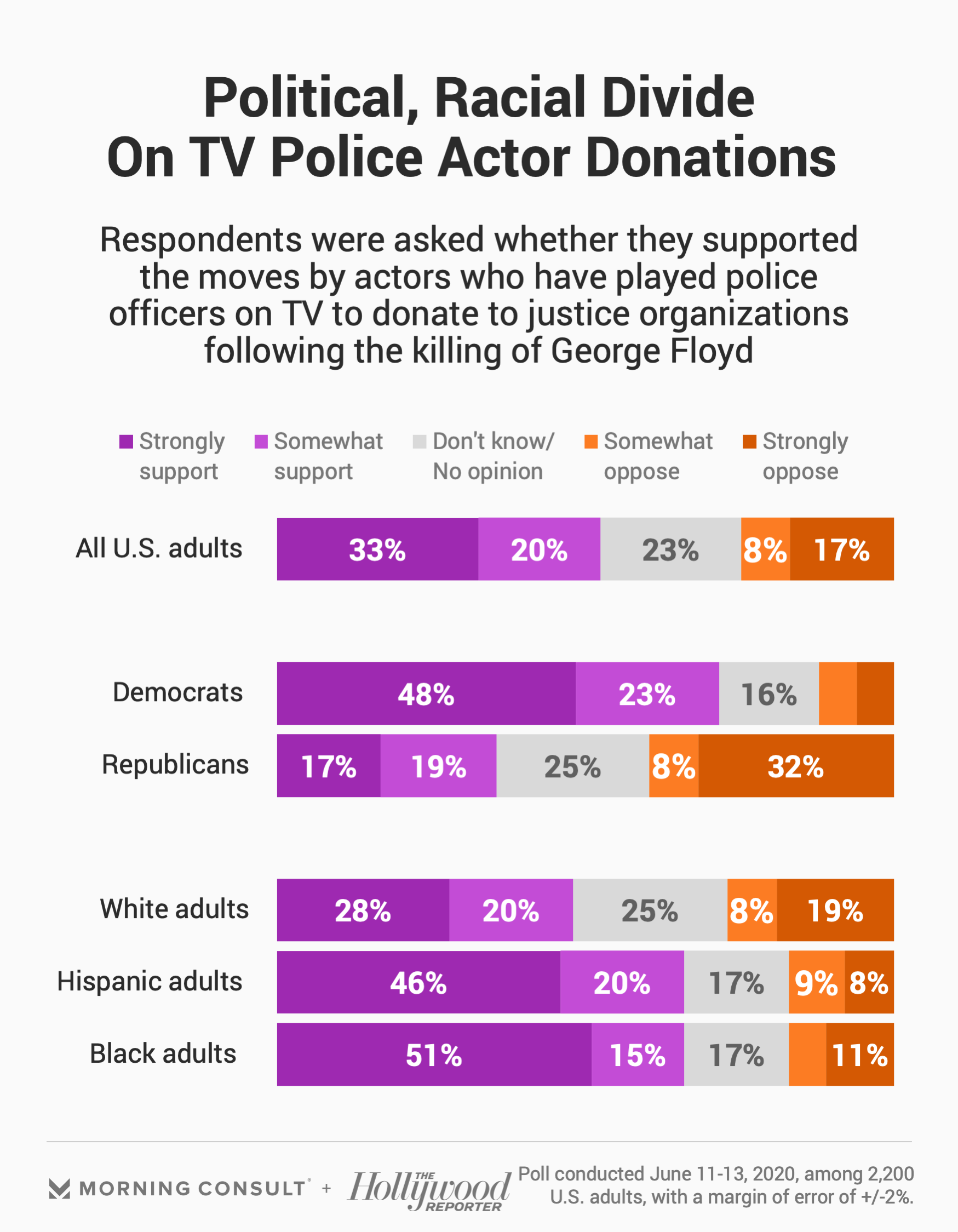 As protests proliferated around the country, two television police officers — Stephanie Beatriz, who plays Detective Rosa Diaz on NBC’s “Brooklyn Nine-Nine,” and Griffin Newman, who played a police officer in two episodes of “Blue Bloods” — each donated $11,000 to the reform group Community Justice Exchange, with Newman urging other actors who have portrayed law enforcement in film or television projects to do the same.

Just over half of adults (53 percent) supported similar donations by actors who have played police officers on television. Seventy-one percent of Democrats supported the donations to bail funds and other justice organizations, while two-thirds of black and Hispanic respondents also backed the action. Among Republicans, 40 percent opposed the donations.

The Democratic and Republican subsamples have margins of error of 3 and 4 points, respectively.