Adults say $300,000 per year is an appropriate amount for a celebrity worth $30 million to give to all charities they support

As calls for justice arose following the killing of George Floyd, many opened up their digital wallets to donate to bail funds for protesters or give to charities advocating for racial equality. And while $50 was a common figure for many of those who chose to match other people’s donations on social media, new polling finds that most Americans expect celebrities to loosen the purse strings a lot more when it comes to charitable giving in general. 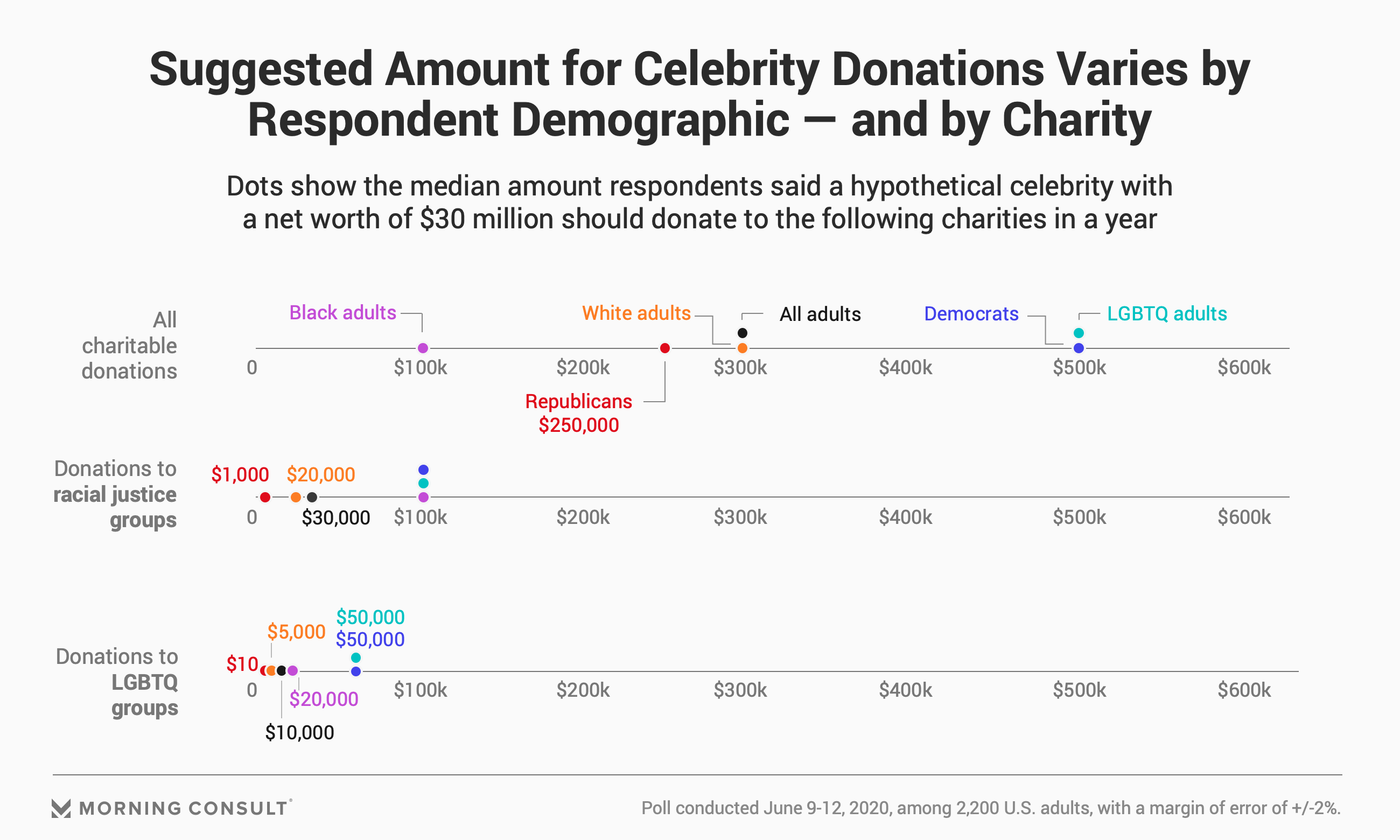 A June 9-12 Morning Consult survey asked 2,200 U.S. adults how much money a hypothetical celebrity with a net worth of $30 million should donate to charitable organizations over the course of a year.

The median response for adults overall was $300,000, while Democrats and members of the LGBTQ community supported the highest median donation at $500,000.

Singer and actor Ben Platt, comedian Seth Rogen and Louis Vuitton artistic designer Virgil Abloh were just some of the famous faces that matched $50 donations to charities, including the Minnesota Freedom Fund, as protests arose in Minneapolis and around the country.

However, Abloh, Platt and Rogen all caught heat on Twitter for what some people considered inadequate contributions given their net worth, with one Twitter user pointing out that with a $50 donation, Rogen had donated less than a dollar for every $1 million of his worth. Rogen’s net worth is estimated at $55 million, while Platt and Abloh clock in at a respective $3 million and $20 million, according to Celebrity Net Worth. All three men later clarified that they had donated more than the $50 they initially publicized on social media.

Overall, while survey respondents named median donations in the hundreds of thousands for charitable giving, they were more likely to say smaller contributions were appropriate for charities supporting racial justice, such as the NAACP and Black Lives Matter, or LGBTQ groups such as the Human Rights Campaign and The LGBT National Help Center.

For example, Democrats, who supported a general charitable donation of half a million dollars, thought celebrities should donate $100,000 to racial justice groups and $50,000 to charities supporting the LGBTQ community.

And while Republicans fell to the middle of the pack when it came to overall charitable contributions, they proposed the lowest median donation amounts for racial justice groups ($1,000) as well as LGBTQ groups ($10).