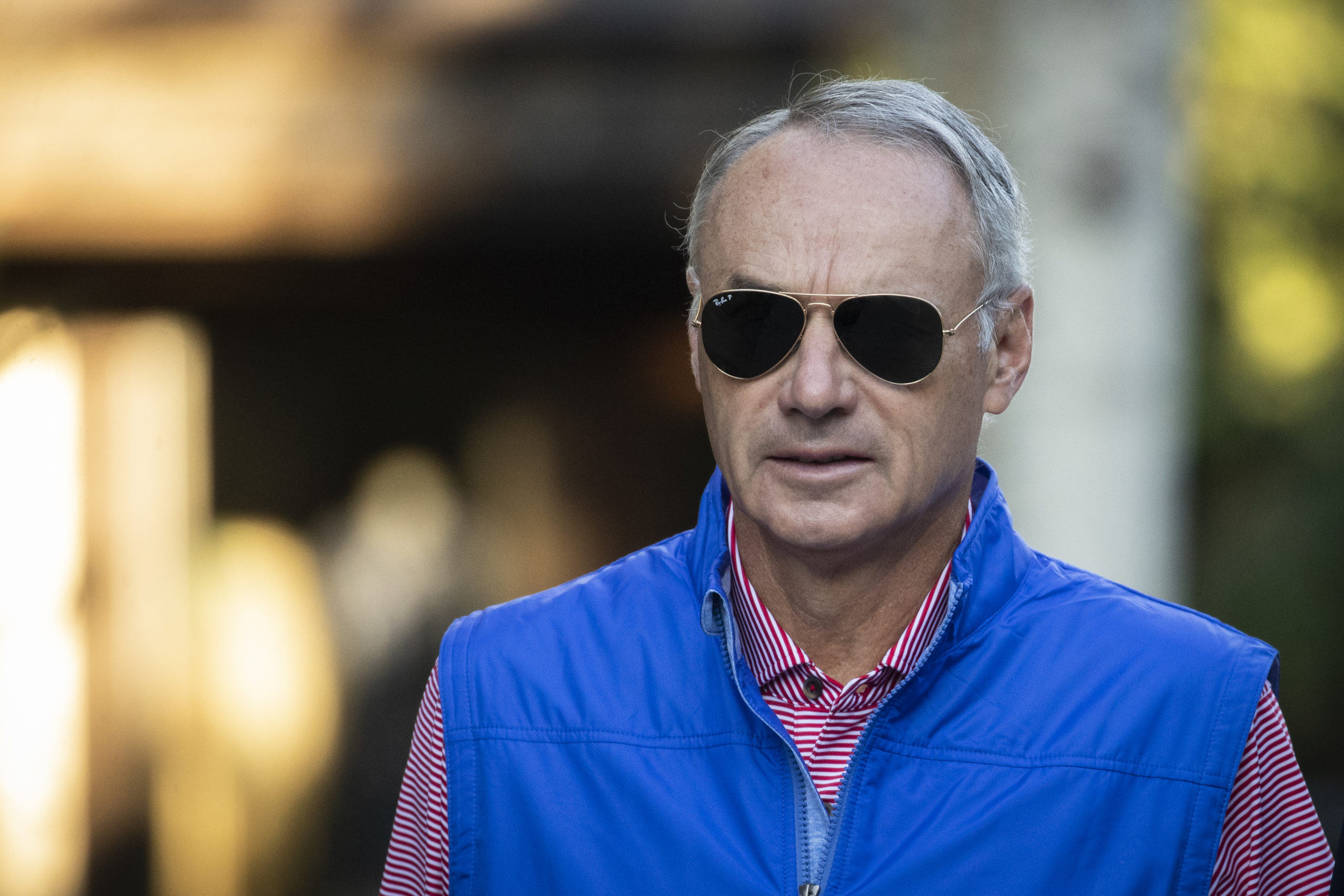 MLB Commissioner Rob Manfred attends the annual Allen & Company Sun Valley Conference in Sun Valley, Idaho, in July 2019. A new poll shows Manfred ranking worst than his peers when it comes to how sports leaders are handling the COVID-19 pandemic and adapted plans for the current or upcoming season. (Drew Angerer/Getty Images)
By Alex Silverman

As MLB and its players’ union continue to negotiate the terms for a season without crowds, new polling indicates baseball fans are slightly more likely to blame ownership if they are unable to reach an agreement, though the largest portion is undecided. 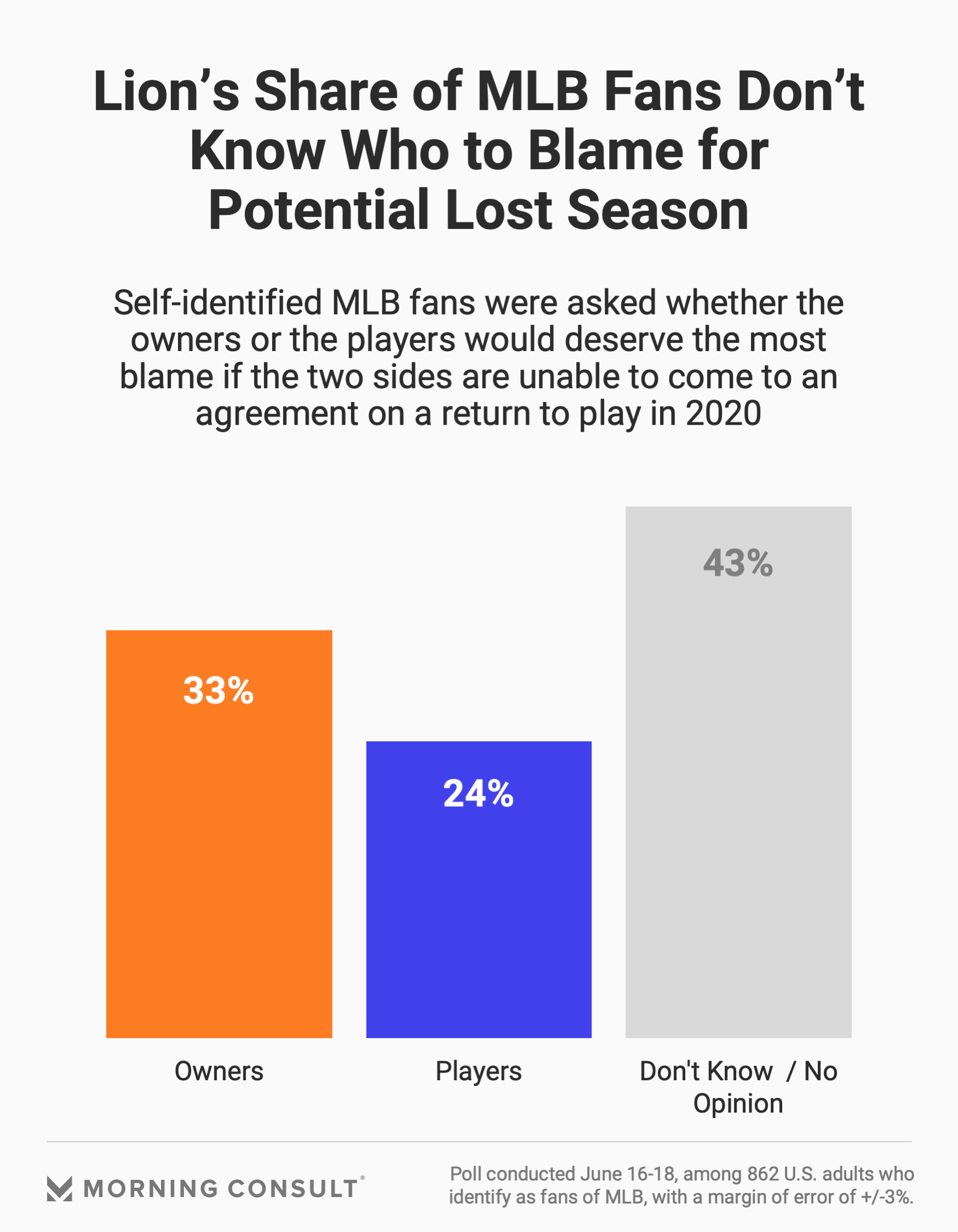 In a Morning Consult survey conducted Tuesday to Thursday, 33 percent of self-identified MLB fans said ownership would deserve the most blame for the failure to reach a deal, while 24 percent of fans pointed to the players. At 43 percent, however, the largest chunk of fans said they either don’t know or have no opinion.

Self-identified “avid” MLB fans were deadlocked, with 35 percent each siding with ownership and the union.

Nineteen percent of MLB fans said they had seen, read or heard “a lot” about the negotiations, with an additional 36 percent indicating “some” awareness of the talks.

With NASCAR, IndyCar and the PGA Tour already back in action, and leagues like the NWSL, MLS and the NBA scheduled to emerge from their pandemic-induced pauses, MLB team owners and players have yet to agree on terms for a potential 2020 campaign. Every day that goes by without a deal raises the risk of the season being lost entirely.

The key points of contention between the owners and players primarily stem from teams’ inability to generate revenue related to hosting fans at their respective ballparks this season due to the pandemic. Based on differing interpretations of a March 26 agreement, MLB players believe they are entitled to their full prorated salary per game played, regardless of whether fans are in attendance, while the owners contend the players should have to renegotiate an additional pay cut beyond the pro rata.

According to multiple reports this week, MLB owners have agreed to offer players their full prorated salaries for a 60-game season that would begin July 19 or 20. The league’s willingness to move on the salary issue was seen as a big step, but the players are said to be pushing for more games, asking for 70 in their most recent proposal.

MLB Commissioner Rob Manfred has been the most popular scapegoat for fans and members of the media, particularly since a widely panned national television interview Monday evening. Five days after declaring with “100 percent” certainty that there would be a 2020 season, Manfred changed his tune, telling ESPN the season was at risk due to the two sides’ inability to find a solution. 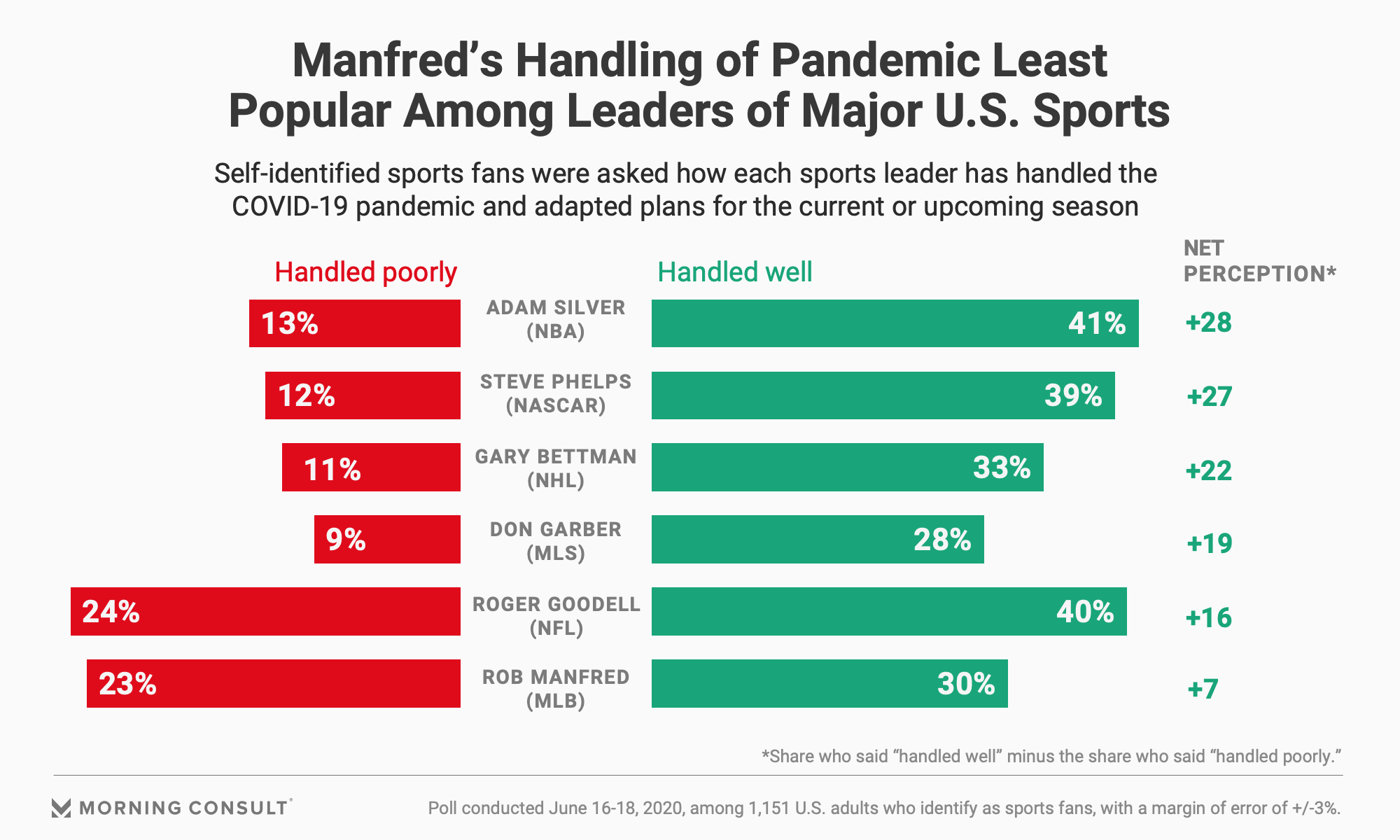 The ire toward Manfred came through to some extent in the poll results, as he trailed five of his counterparts in other major U.S. sports in terms of how self-identified sports fans believe each has handled the pandemic and adapted their current or upcoming season. NBA Commissioner Adam Silver received the best rating for his handling of the pandemic with a positive net perception — the share of fans with a positive opinion minus the share with a negative opinion — of 28 percentage points. Silver, who is spearheading a planned resumption of the suspended 2019-2020 season for 22 teams at Walt Disney World Resort beginning next month, was closely followed by NASCAR President Steve Phelps, who ensured stock car racing was the first U.S. sport back in action, with a 27-point rating.

By comparison, Manfred was 7 points above water for his handling of the pandemic, compared to 16 points for his nearest peer, the NFL’s Roger Goodell.