Why Gen Z Isn’t Interested in Your Statements, Promises and Commitments — Yet

Gen Z, known for its action, activism and impact, is now demanding these qualities from brands and businesses if they expect to gain this generation’s trust, purchases or talents in the future, writes Morning Consult’s Victoria Sakal.

Young participants at the All Black Lives Matter Solidarity March on June 14 in Los Angeles. Morning Consult research finds that the share of Generation Z members who say that this movement has made a major impact on their worldview has risen from 47 percent in April to 68 percent in June. (Sarah Morris/Getty Images)
By Victoria Sakal

Get a downloadable report with the latest Gen Z data here.

All signs pointed to COVID-19 becoming the single-most life-changing experience for Gen Z. But Morning Consult’s ongoing tracking of this generation and their attitudes, behaviors and expectations as relates to culture, corporations and consumption since the coronavirus outbreak in March reveals that while the pandemic has continued to have the greatest impact on this generation’s worldview (75 percent of Gen Z say it’s had a major impact), the Black Lives Matter movement has become hugely consequential for these young people in recent weeks.

Behind only the coronavirus outbreak, Gen Z now reports that the Black Lives Matter movement is one of the most impactful events on their worldview: The share of this generation saying that this movement has made a major impact on their worldview has risen from 47 percent in April to 68 percent in June — a significantly greater share than the 50 percent of all adults saying the same in mid-June.

As America’s largest, most diverse, best-educated and most financially-powerful generation, Gen Z’s distinctive habits have long been expected to play an outsized role in shaping the future of American culture and commerce. Morning Consult’s 2019 Gen Z research identified that given Gen Z’s predominantly liberal leaning, civil rights and social justice issues were top of mind for this group; with discrimination considered the third-most critical threat facing the country, and civil rights being the second-most important political issue to this generation, it’s no surprise that Gen Z has been so strongly ignited and activated by the recent resurgence of the Black Lives Matter movement. 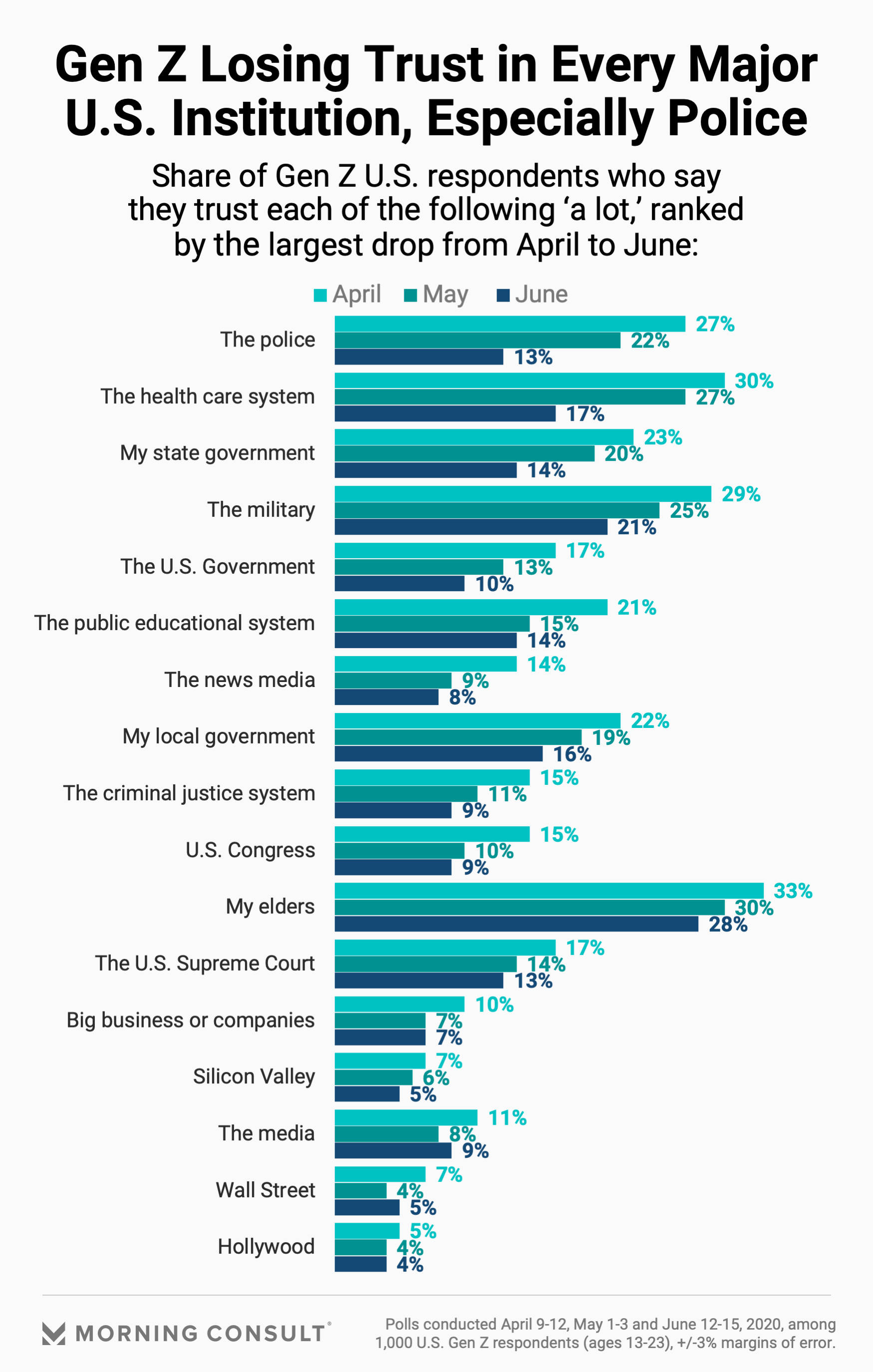 But as with prior social causes that have galvanized this generation, the reverberations of this cohort’s energy will be felt far wider than society in general, especially when Gen Z is now more than ever expecting brands and businesses to lead us to a better future. The stakes — support of a powerful generation ready to vote with their wallets and talent — couldn’t be higher, and the call for action couldn’t be clearer.

Gen Z taking matters into their own hands …again

Gen Z has a characteristically widespread distrust of those in power and a sense that the world isn’t fair, and Morning Consult tracking of 1,000 Gen Z respondents (ages 13-23) finds that these sentiments are only strengthening in the context of a global pandemic and severe national unrest. Only 5 percent now strongly agree that the world is a fair place; since May, there’s been a 20 percentage point decrease in the share of this generation that trusts people in power to do the right thing given the events of the past few weeks; trust in nearly every major U.S. institution is declining, and Gen Z’s optimism about the future of both the world more broadly and the United States specifically continues to fall.

But while the share of Gen Z members who feel that older generations have made the world a worse place continues to rise, up 7 percentage points since April, so too is the share who feels that younger generations will make it a better place, up 8 points since April. And the share of this generation believing that they have the potential to impact the world is also rising, with 30 percent strongly agreeing that this is true in June versus 23 percent strongly agreeing in May.

It may have taken horrifying headlines and decades of discontent, but when it comes to fixing the wrongs facing the future of our society and our world, Gen Z is fully aware of their ability to take matters into their own hands — and appears to have every intention of doing just that. 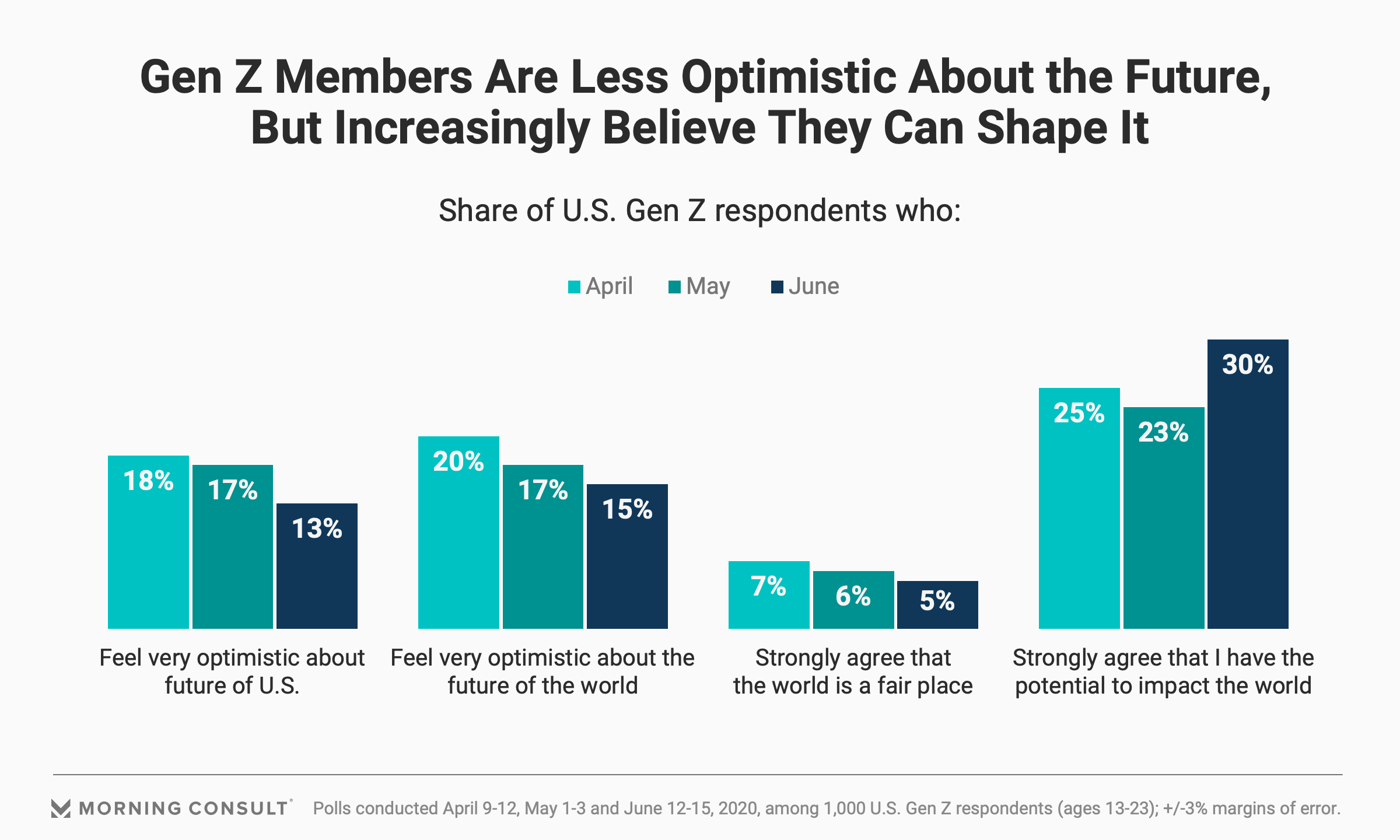 Given most (76 percent) of Gen Z agreeing that the way policing works in America is fundamentally broken and that major structural changes are needed, 81 percent — more than any other generation — support Black Lives Matter protests.

While 12 percent have themselves attended a protest, and 16 percent have made a donation, Gen Z’s support for the movement hasn’t been limited to the sidelines. Symptomatic of this generation’s bias for action and impatience for complacency, they’ve been busy rallying their peers, families and communities and forcing the critical conversations required for real progress: 41 percent have posted about the protests, 39 percent participated in #BlackoutTuesday and another 39 percent have tried to encourage others to support the movement, all in an effort to spread the word and drive awareness around the issue throughout their networks.

But true to form, they’ve also taken matters into their own hands. With 81 percent of Gen Z saying that protests have made them more aware about race issues in America, about half (46 percent) have made an effort to learn more about actions they can take to support racial justice in the United States and 64 percent have initiated conversations with their friends and family on the topic. 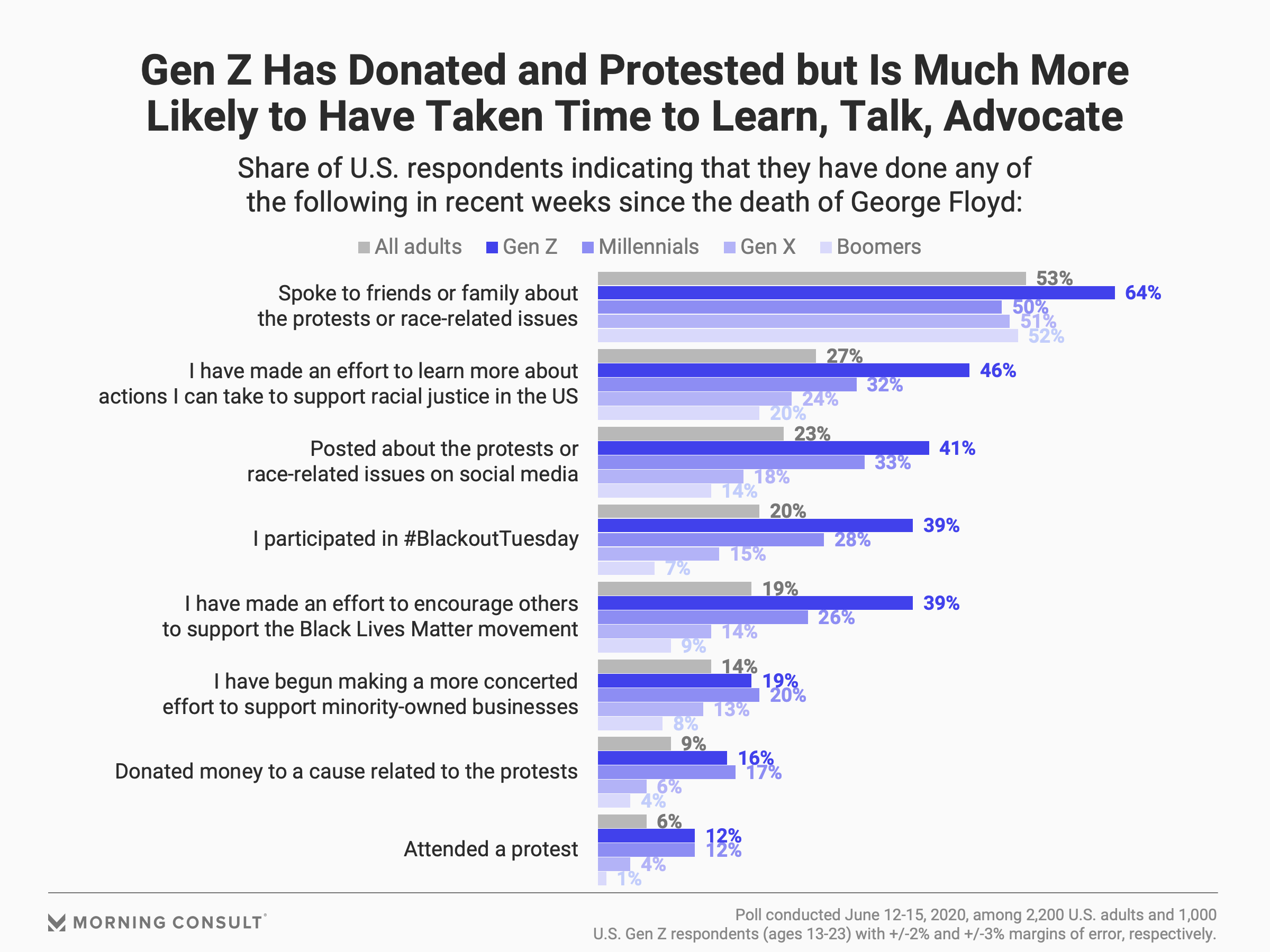 It’s clear that it’s now time for meaningful action — and for Gen Z, this means taking ownership of the solution. They know how to share on social and participate in protests, but they’re also abundantly aware of the role brands and businesses play in shaping a better future, and they are prepared to use their size, influence and spending power to drive change on that front as well. 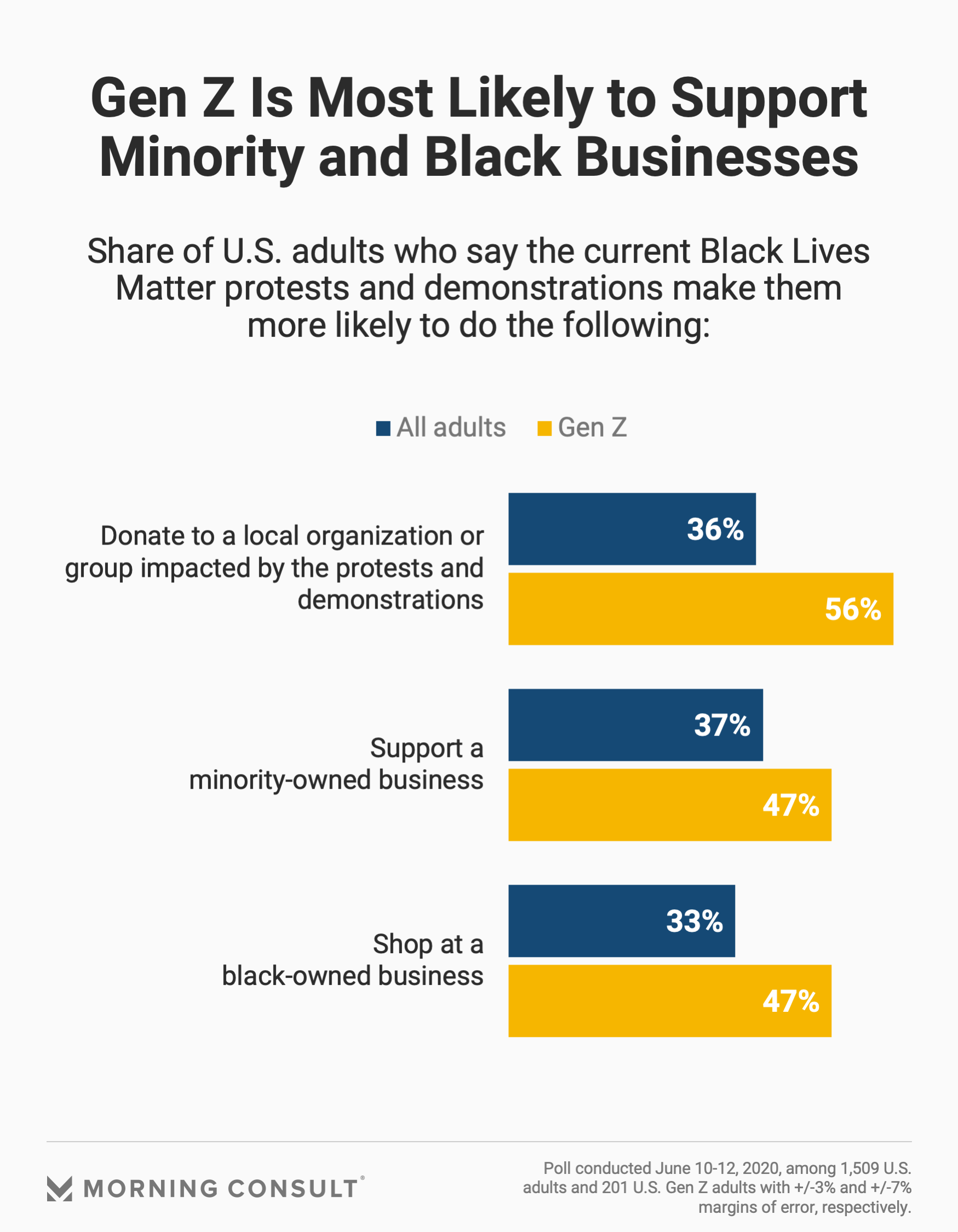 Gen Z putting their money — and talent — where their mouth is

Gen Z’s anger and frustration towards the system combined with the generation’s bias for action and sense of responsibility (and commitment!) to be the change they want to see will have tangible implications for our country — politics and business in particular.

With regard to Washington, 61 percent of the generation agrees that the recent protests and response from politicians have made them much more likely to vote in November, and 46 percent — more than any other generation — say that recent events related to George Floyd’s death and the Black Lives Matter movement make them more likely to vote for former Vice President Joe Biden.

But beyond voting at the polls, Gen Z will increasingly be voting with their wallets to ensure long overdue steps toward addressing systemic racism are taken in boardrooms, as well as in Washington. Especially given their lack of trust in those in power, particularly as relates to Washington, what matters more to this generation than voting or defunding the police is remedying the underlying issues that have led to today’s vast inequities and injustices — and in the short term, supporting those who’ve been wronged. Gen Z is 42 percent more likely than all adults on average to shop at Black-owned businesses because of Black Lives Matter, and a similar share, nearly half, say they’re more inclined to support minority-owned businesses in light of this movement.

As far as the turning point in expectations of brands and businesses, similar to their generational counterparts, 82 percent of Gen Z appreciate it when companies and business leaders make a public statement or post about movements such as Black Lives Matter but feel that their actions will speak louder than their words. Indeed, compared to 69 percent of all adults, 73 percent of Gen Z thinks that corporate statements released today around Black Lives Matter protests are motivated by a desire for publicity instead of a genuine desire to do good. With most of America — and its youngest leaders, voters and shoppers in particular — demanding commitment over communication and action over aspiration from today’s businesses and their leaders, what can companies do to win over, if not simply avoid alienating themselves from, this powerful and provocative audience? 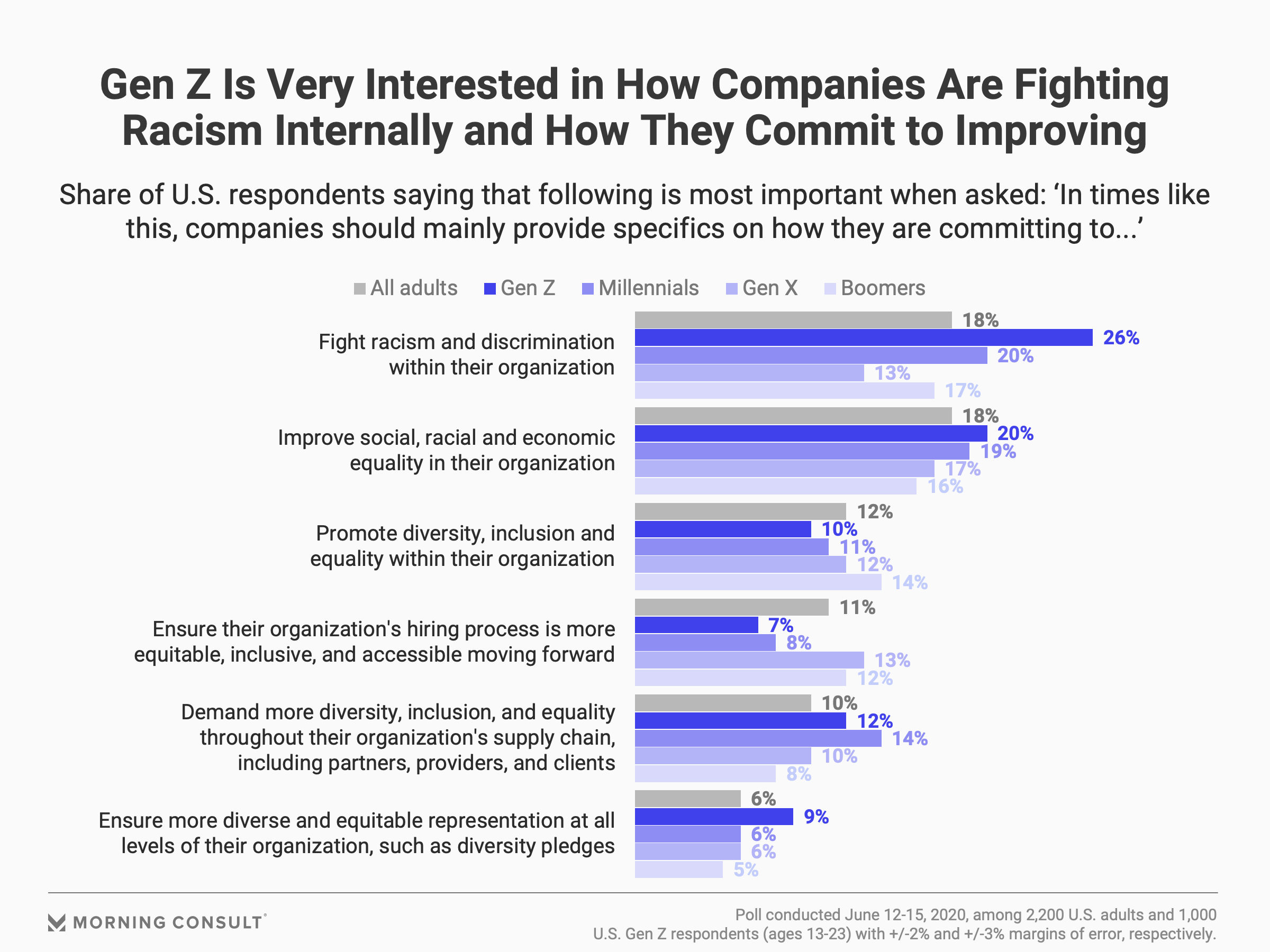 Further, Gen Z strongly believes that corporations and their leaders play an important role in this country and as such should use their influence to not only impact political and cultural issues, but also specifically demand action from entities with the power to enact systemic change.

Importantly, how companies meet this generation’s expectations could have real implications for their future viability in terms of both the consumers that support them and the talent they attract. Two-thirds of Gen Z agree that how businesses react and express themselves with regard to Black Lives Matter will permanently affect their decision to buy from them in the future, and slightly more say that the extent to which companies actually deliver on the statements, promises and commitments made today will play a significant role in those purchasing decisions.

This is especially significant given recent findings on top drivers of CEO performance: Trends revealed in that research, namely that half of the top drivers relate to authentic leadership in, sensitivity toward the needs of, and positive impacts on society, are only amplified by what shoppers of the future will literally demand from any company they buy from or work for. Gen Z could very well cancel any company that refuses to change. 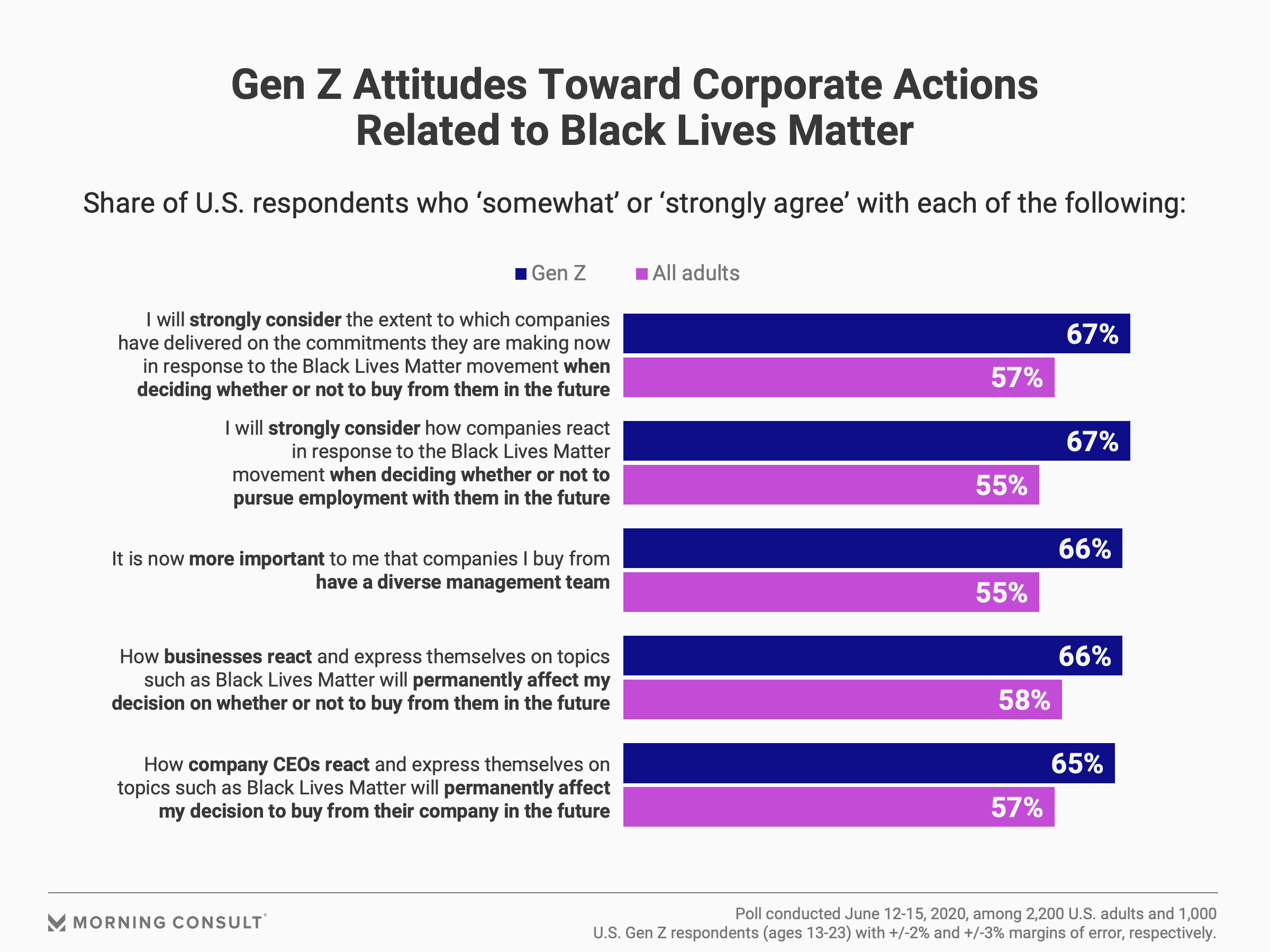 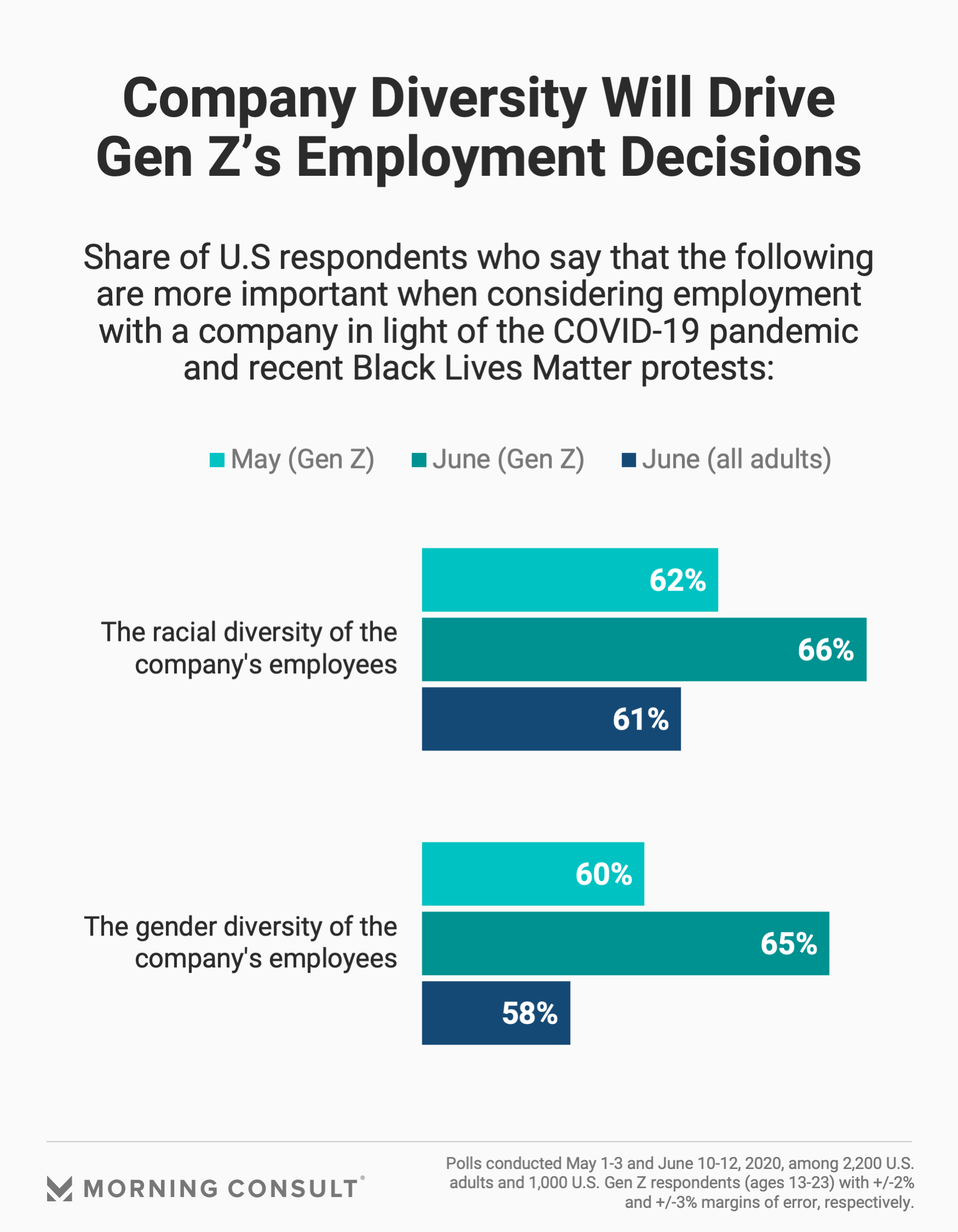 Compelling implications from a talent perspective put further pressure on companies to act and change versus promise and hope that people will forget: Gen Z is notably more likely than other generations to say that they’ll strongly consider how companies react in response to BLM when deciding whether or not to pursue employment with them in the future (67 percent versus 57 percent among all adults).

They are also more likely than other generations to say that both the racial and the gender diversity of a company’s employees as well as the company’s contributions to society are very important to them in a future employer. In fact, racial and gender diversity are the two employer qualities to have increased in importance among this generation since May, with 4- and 5-point gains, respectively.

Gen Z, a generation known for its action, activism and impact, is now demanding these from brands and businesses if they expect to gain this generation’s trust, purchases or talents in the future. Compared to the 40 percent of Gen Z who say that an influencer’s recommendation is important in purchase consideration, a top driver for this generation is being a trusted brand, with 86 percent indicating it’s important. With the events of recent weeks only amplifying these feelings, it’s clearer than ever that tangible, authentic impact — a surefire way to build trust with this generation — will go much further than paid influence for winning over the future leaders, shoppers and employees of our world.

This piece includes results from three waves of research Morning Consult has conducted with Gen Z to understand the impact of COVID-19, Black Lives Matter, and other recent events on this generation: