Brees, the most popular player in the league earlier this year, has dropped three spots since February 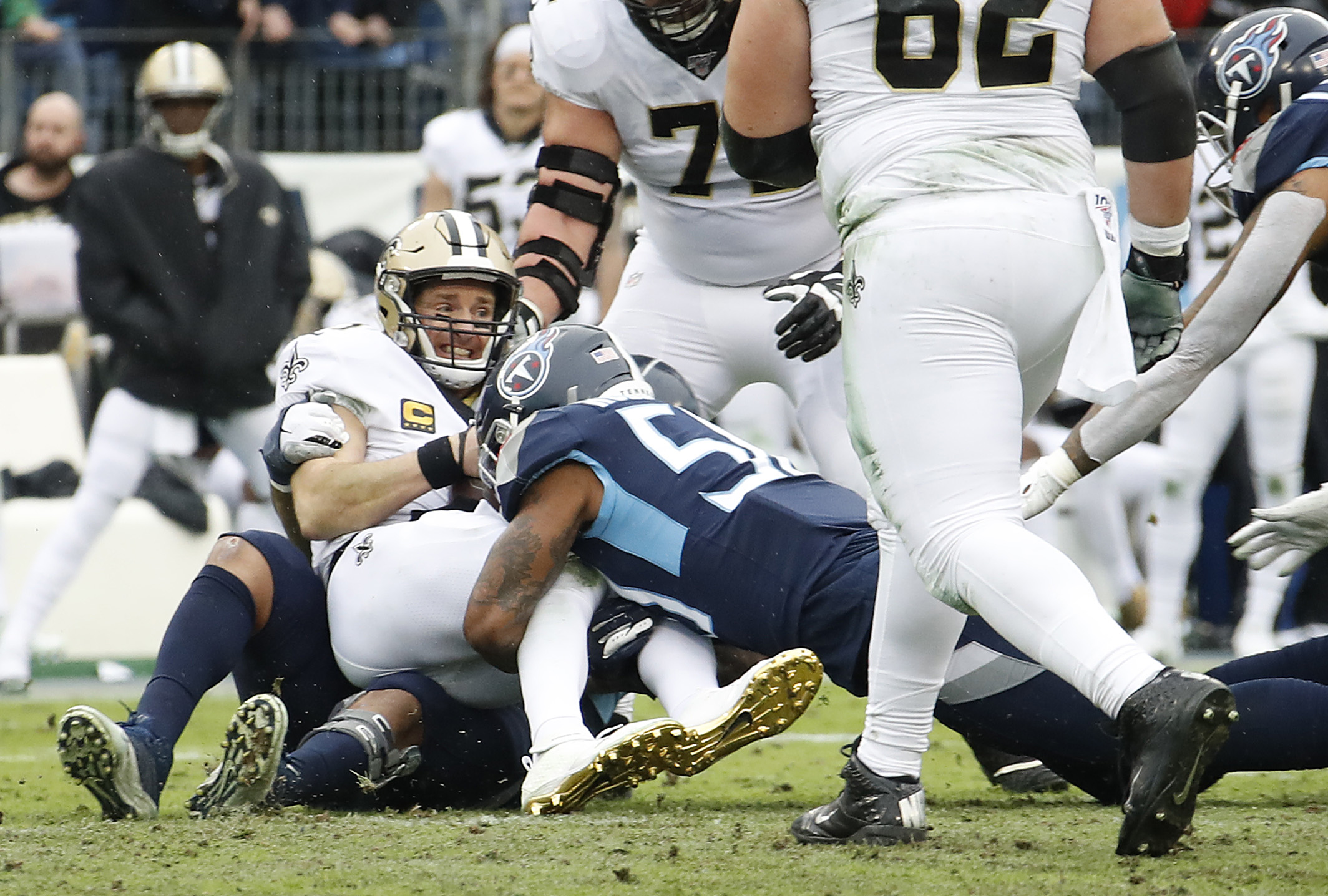 Linebacker Derick Roberson #50 of the Tennessee Titans sacks quarterback Drew Brees #9 of the New Orleans Saints during the first quarter in the game at Nissan Stadium on December 22, 2019 in Nashville, Tennessee. (Frederick Breedon/Getty Images)
By Alex Silverman

The resurgence of the Black Lives Matter movement following the alleged murder of George Floyd has impacted the way NFL fans view some of the sport’s most prominent figures. 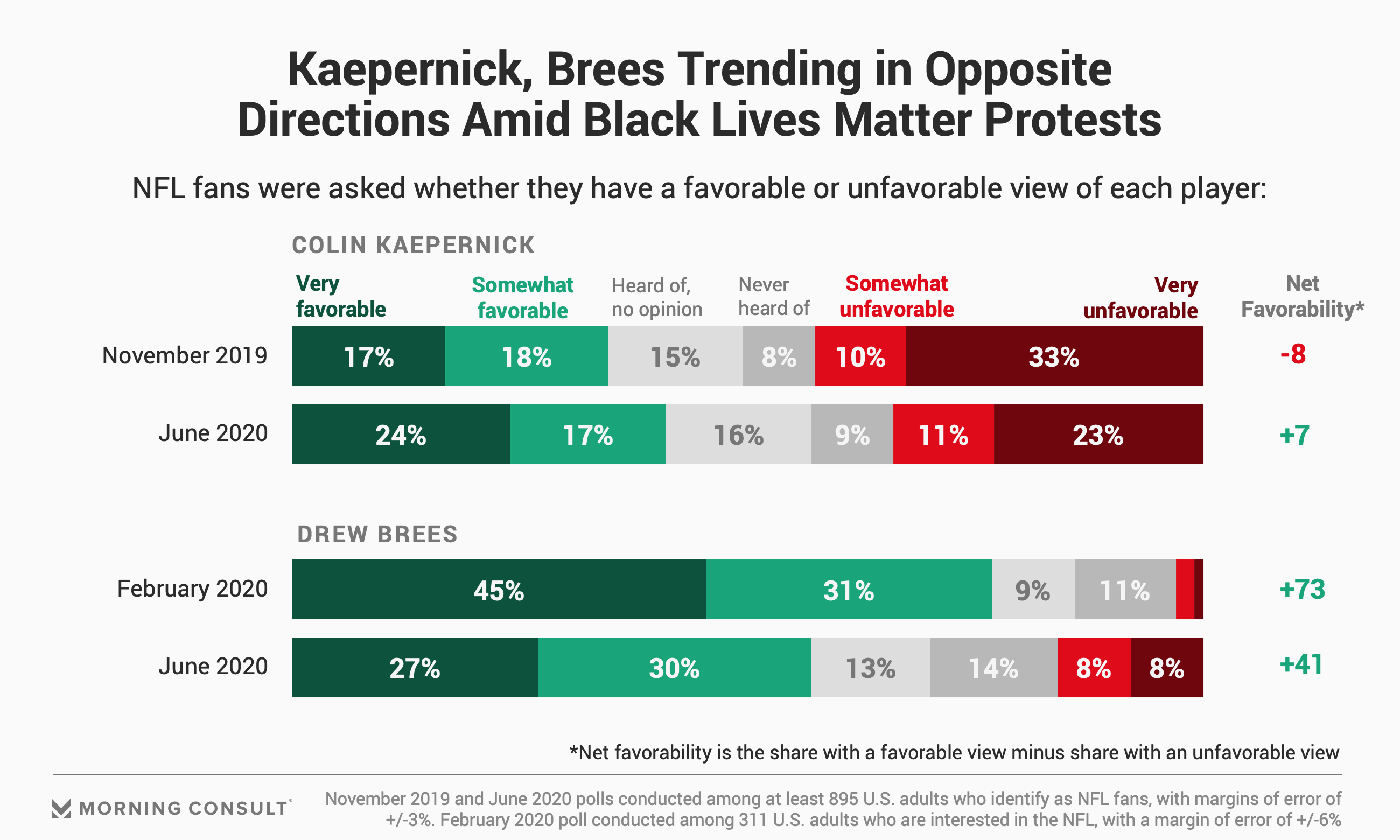 Brees, who polled as the most popular skill position player among NFL fans both before the 2019-20 NFL playoffs and after Super Bowl LIV in February, saw his net favorability drop from 73 to 41 percentage points, to the No. 4 position in a June 9-11 survey, following a Yahoo interview in which he said NFL players were “disrespecting the flag” by kneeling during the national anthem. (Net favorability represents the share of NFL fans with a favorable opinion of a player minus the share with an unfavorable opinion.)

Several prominent Black athletes, including some of Brees’ own Saints teammates, criticized him for that characterization of the gesture. Brees subsequently apologized, saying his comments were “insensitive and completely missed the mark,” a move that led President Donald Trump to criticize the quarterback on Twitter for backing down.

In February, only 3 percent of NFL fans had an unfavorable opinion of Brees, a Super Bowl champion and the league’s all-time leader in passing yards. In the June 9-11 survey, 16 percent of fans viewed Brees unfavorably, including 29 percent of non-white fans. 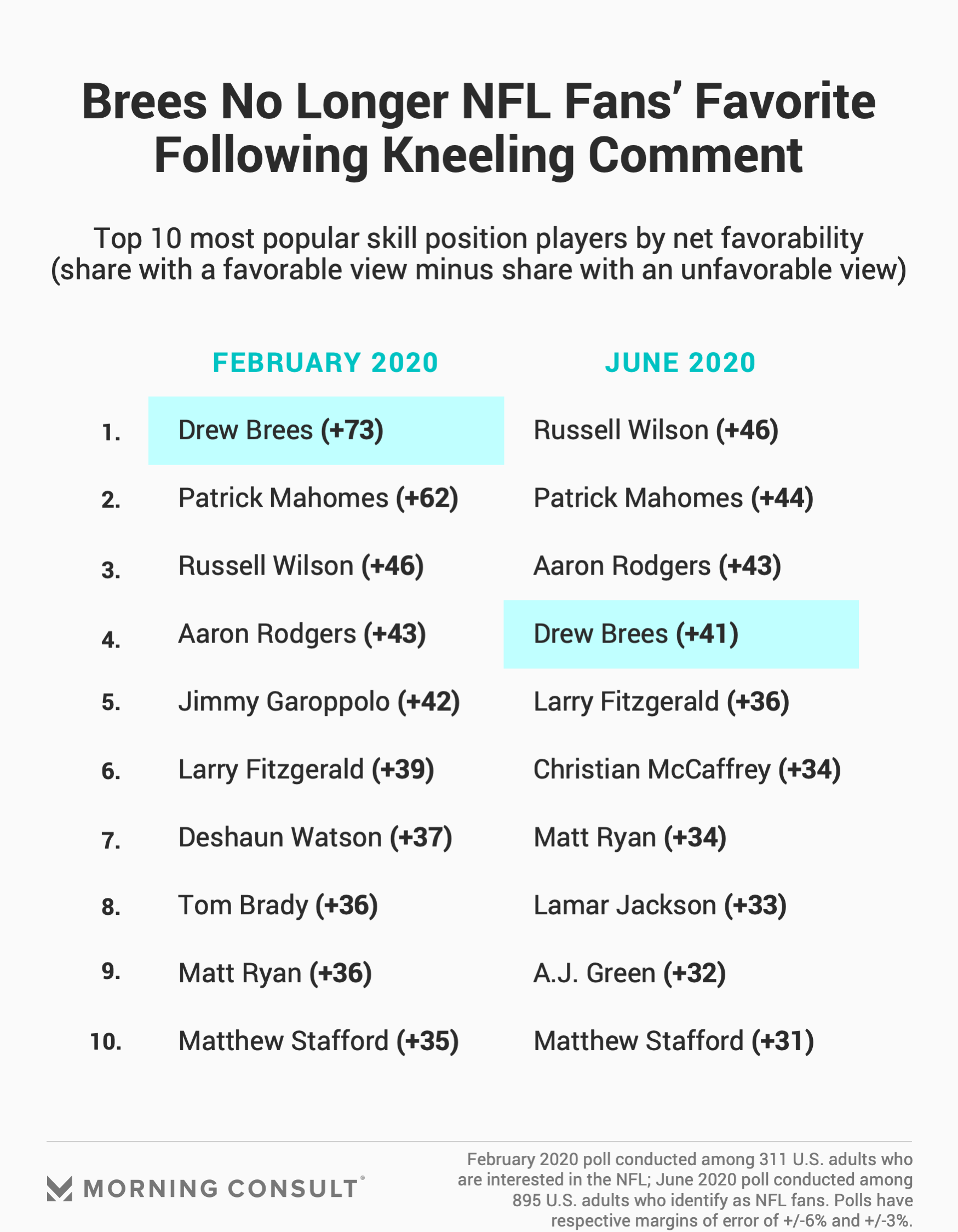 While Brees’ stock dipped amid the wave of demonstrations earlier this month, the movement has benefited the perception of Kaepernick, the quarterback-turned-activist who started the kneeling movement back in 2016. In November 2020, prior to his planned workout for NFL teams that became the subject of a dispute between Kaepernick and the league, Kaepernick’s net favorability among NFL fans was negative-8 percentage points, indicating more fans viewed him unfavorably than favorably.

Floyd’s alleged murder by a Minneapolis police officer, however, appeared to vindicate Kaepernick and his cause in the eyes of some Americans, and the public has become more receptive to political speech by athletes. Even among white Americans, Republicans and members of military households, opposition to kneeling during the national anthem has softened.

As a result, Kaepernick’s net favorability among NFL fans in a June 16-18 poll was 7 percentage points in positive territory, representing a 15-point swing from February.