HBO Max’s temporary withdrawal of “Gone With the Wind” over what it says are racist depictions in the film has revived the debate over how media companies should treat old movies, many of them beloved by much of the public, that are criticized for portraying negative stereotypes of minorities.

HBO Max’s decision is not a popular one, according to a June 11-13 Morning Consult/The Hollywood Reporter survey. It found that 53 percent of the 2,200 U.S. adults surveyed opposed HBO Max’s temporary removal of the Oscar-winning film from its platform, including 72 percent of Republicans. Democrats were split with 43 percent supporting the move and 41 percent opposing it. 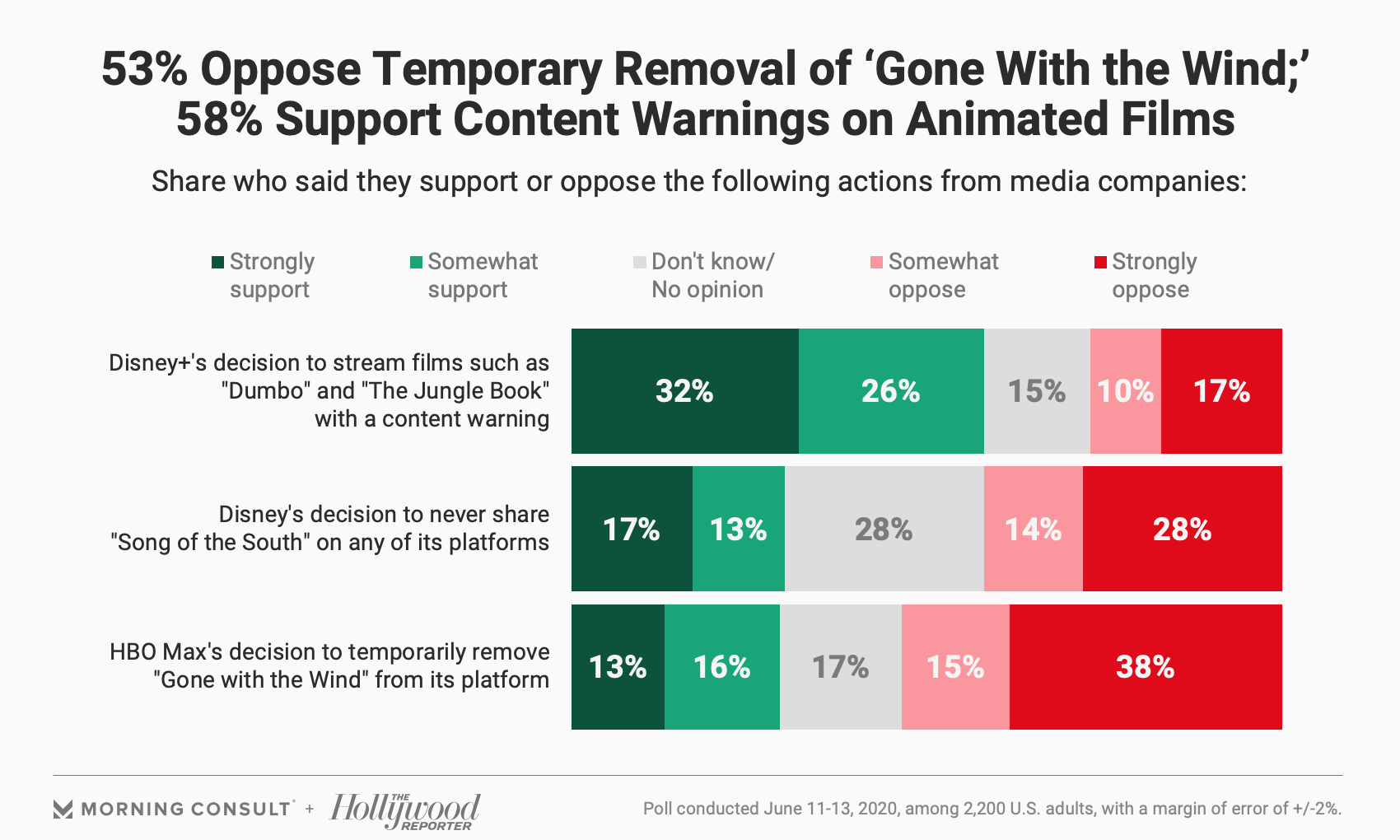 But what does get more public support is attaching a statement explaining the historical context of a movie or TV show, which is what HBO Max plans to do with “Gone With the Wind.” When reached for comment, HBO Max referred to an earlier statement in which it said keeping the title available “without an explanation and a denouncement of those depictions would be irresponsible” and “counter to WarnerMedia’s values.” The film will not be re-edited but will include a discussion surrounding the historical context when it is returned to HBO Max at an unspecified date.

Three in 5 adults said adding labels warning of potentially objectionable content makes controversial films and TV shows more appropriate to stream, while 57 percent said the same of adding information about the historical context of the movie or TV show.

However, a 41 percent plurality said removing problematic scenes made it less appropriate to stream a show or movie. The survey has an overall margin of error of 2 percentage points, while the Democratic and Republican subsamples have respective margins of error of 3 and 4 points. 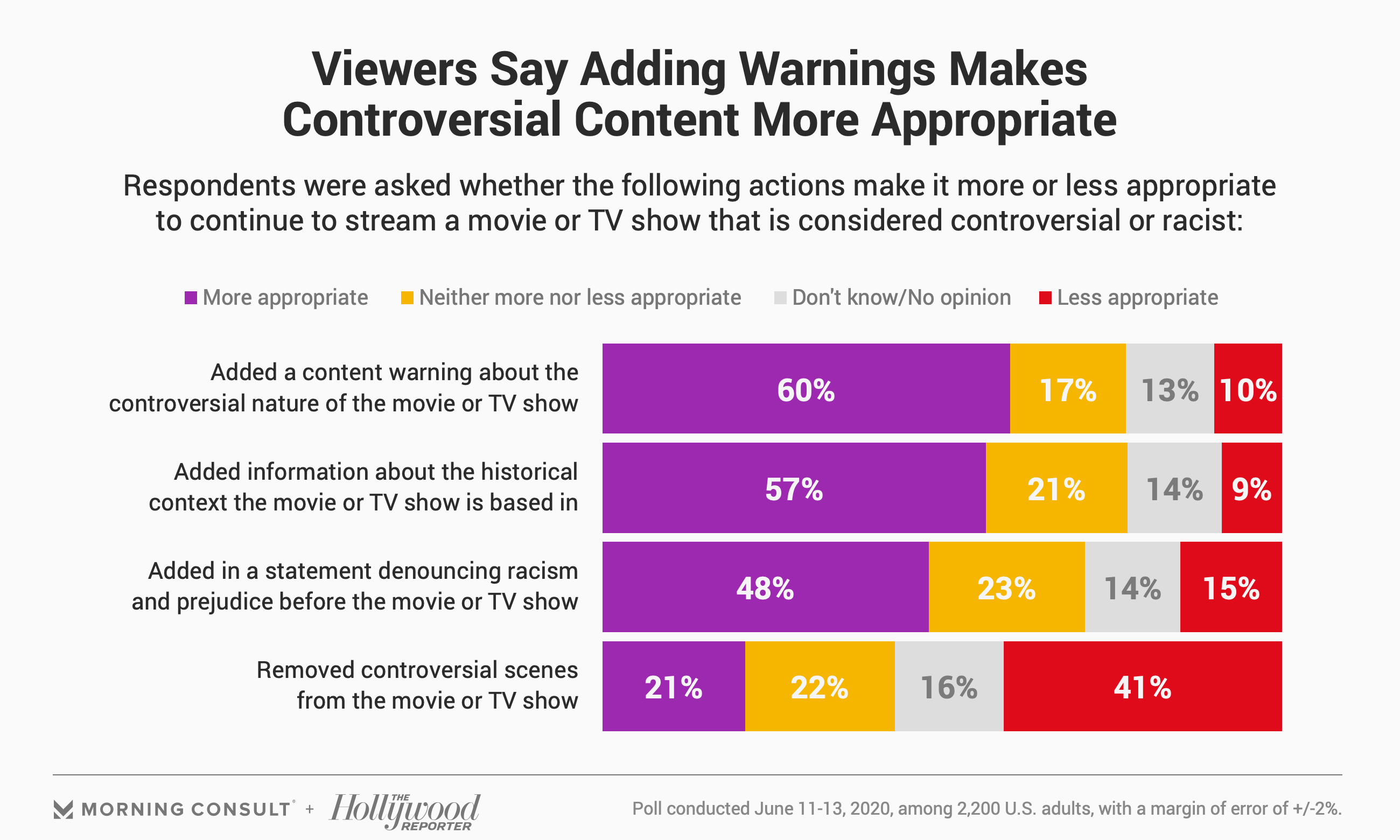 HBO Max’s decision (which came after a Los Angeles Times op-ed from filmmaker John Ridley calling on the platform to remove the movie) sparked a conversation about whether or not the temporary removal of the film qualified as censorship. Some Los Angeles Times readers felt strongly that it was censorship, while other entertainment writers, including The Washington Post critic Ann Hornaday, felt otherwise.

Kendall Phillips, a professor at Syracuse University’s department of communication and rhetorical studies, said this form of film censorship historically comes from three sources: the government, corporations and the public, with the removal of “Gone With the Wind” qualifying as corporate censorship in his view.

But Mia Mask, a professor of film at Vassar College, said she doesn’t think that removing “Gone With the Wind” from HBO Max qualifies as censorship, pointing out that the film’s removal is “not permanent and not being imposed by some external entity.” She also added that the film is currently available on other platforms.

Challenging historical depictions of race in film has a long history, dating back as early as 1915 with D.W. Griffith’s film “The Birth of a Nation.” The film, which showed the birth of the Ku Klux Klan and depicted lynchings on screen, was decried as racist by Black Americans when it was released, and the National Association for the Advancement of Colored People called for a boycott of the film. 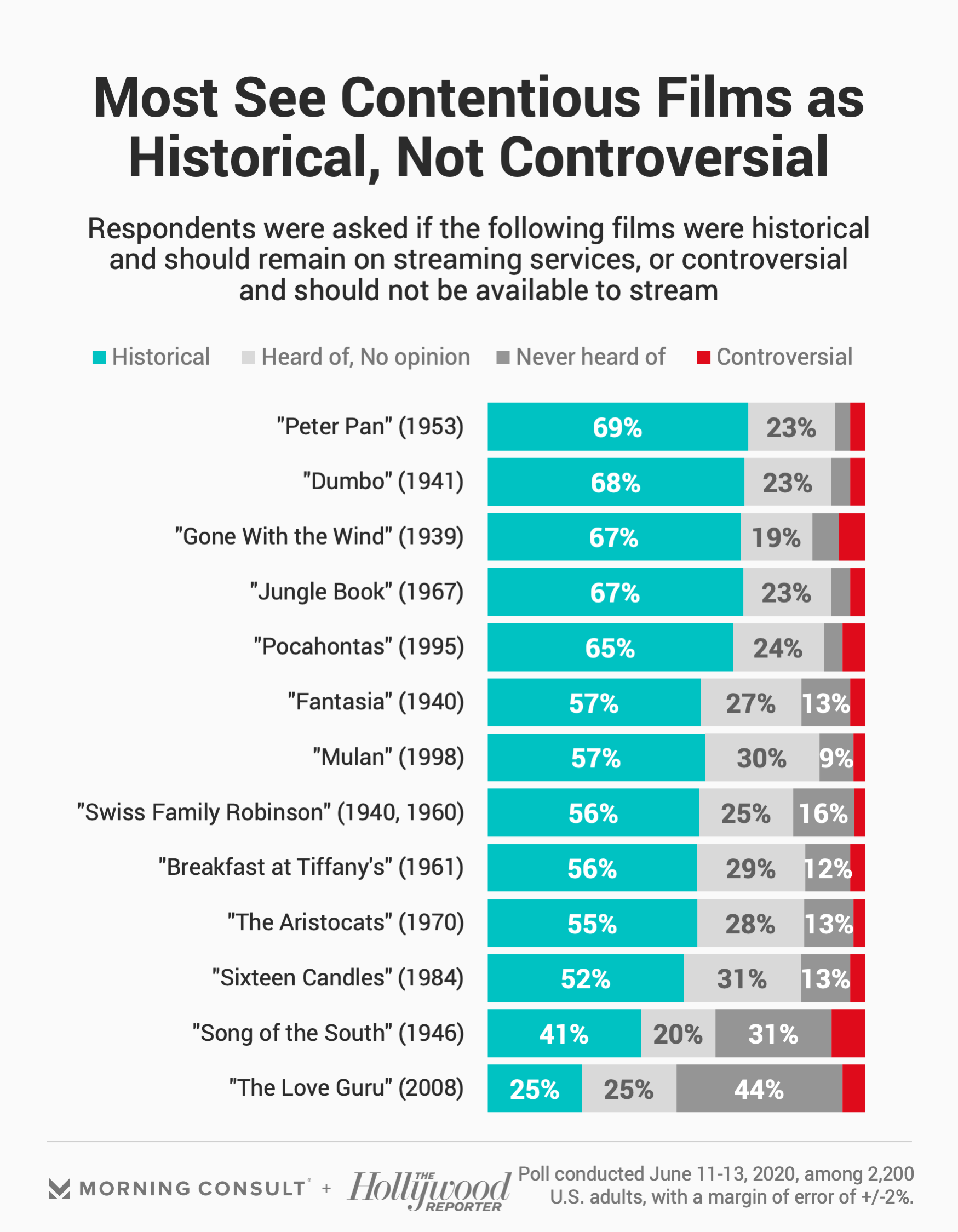 Since then, movies such as “Avatar” and “Breakfast at Tiffany’s” have come under fire for furthering racist ideas and offensive stereotypes, but public criticism was met with silence from the studios. These days, in light of the Black Lives Matter movement, entertainment companies are more likely to respond to criticism of objectionable content, but HBO Max’s decision appears to be more than just a fleeting reaction to an event, Phillips said.

“This may be a moment where at least some in the entertainment industry are stepping back and asking bigger questions and maybe trying to recalibrate their brand and storytelling to tell a different, more inclusive story,” Phillips said.

Mask had a different take, describing HBO Max’s decision to temporarily remove “Gone With the Wind” as “window dressing.” Instead, she said, “we could be talking about much more relevant, salient media issues,” such as how media companies can increase diversity, both within their ranks and through their storytelling.

And the need for diversity is apparent: The most recent edition of UCLA’s Hollywood Diversity Report found that 93 percent of senior film executives and 86 percent of unit heads are white, and just 3 out of 10 film leads in 2019 were people of color.

“I’m not sure that the pulling of some of this outdated content when they also are not able to release new films is germane to what we are seeing right now in the public sphere,” she said. “It’s great that we’re having this conversation about content, but I would like to see more substantive initiatives.”

HBO Max did not respond to a request for comment on Mask’s remarks.

Prior to HBO Max’s announcement on “Gone With the Wind,” Walt Disney Co. made a commitment that it would not make “Song of the South,” the 1946 film that is widely considered racist, available on any of its platforms, including Disney+. And the company has included content labels warning of “outdated cultural depictions” on some of its older animated films, including “Dumbo,” “The Aristocats” and “The Jungle Book.”

Mask pointed out that films already come with ratings and disclaimers warning audiences of language or sexual content and so in her view, labels warning of racist depictions are no different.

“Those disclaimers might very well be helpful to let people know whether or not they actually want to watch something or to let them know what they’re looking at in the same way that a rating system lets people know and then you make the choice for yourself,” she said.

In addition to a statement denouncing the racist characterizations in “Gone With the Wind,” HBO Max plans to include a pre-film introduction from Jacqueline Stewart, a professor in the department of cinema and media studies at the University of Chicago. In a CNN opinion piece, she said she would discuss the historical context of “Gone With the Wind” when the film is restored to its platform.

Phillips sees this as a move that can only enhance the film. “Letting a historian come in and tell that story and hopefully tell it in a slightly more complex way helps people appreciate both what the film does in the positive sense and also what it did in the negative,” he said.

In Phillips’ view, this shift away from a binary view of films as good or bad could lead more content providers to follow Disney and WarnerMedia’s lead, as the conversation around older depictions of race and gender continues.

“The reality is most of these are very complicated films that spoke to their moment in a variety of ways, both good and bad,” he said. “To understand where our culture is now requires us to understand how our culture got here. Those films kind of mark the shifts and progress of our culture.”

Related: ‘The Hunt’ Is Back On, but Audiences Are Split on Its Release
Content Moderation Film and TV Race in America Streaming