Both Democratic and GOP Voters Back Bans on Chokeholds, No-Knock Warrants

Calls from demonstrators nationwide to ban law enforcement from using the practices that led to the deaths of George Floyd in Minnesota and Breonna Taylor in Kentucky have wide support across party lines.

According to a new Morning Consult/Politico poll, 73 percent of voters support banning police officers from using chokeholds, such as the fatal nearly nine-minute maneuver used on Floyd last month by former Minneapolis police officer Derek Chauvin. And 64 percent in the June 19-21 survey back a federal ban on no-knock warrants, which authorize officers to enter an individual’s residence without prior warning and led to the fatal shooting of Taylor in her Louisville home in March.

The poll was conducted among 1,988 registered voters and has a margin of error of 2 percentage points. 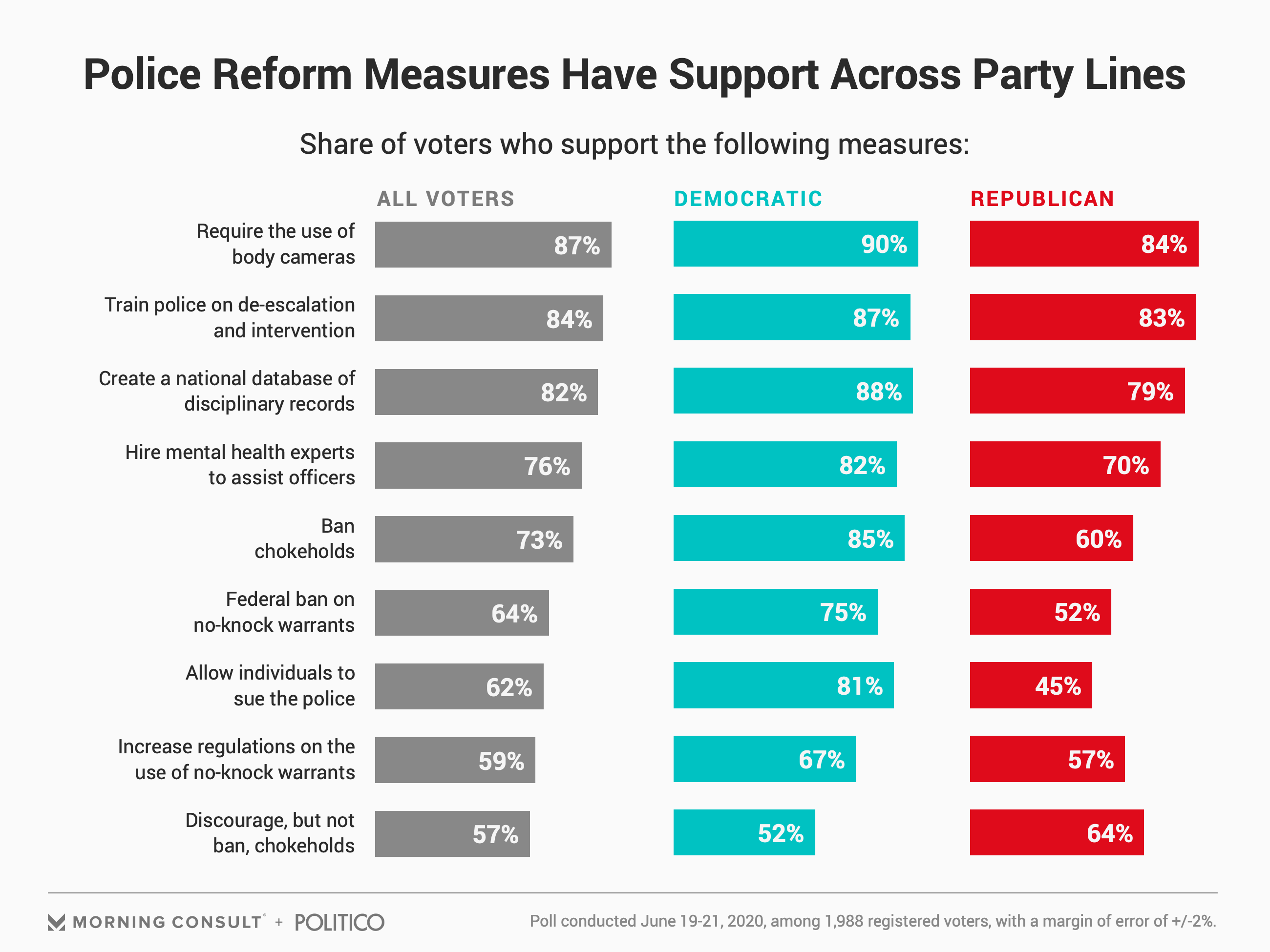 Other measures — such as requiring police officers to use body cameras, training law enforcement on de-escalation and intervention tactics and creating a national database of police disciplinary records for police departments to use as a hiring resource — are backed by more than 4 in 5 voters, with little opposition among Democrats or Republicans.

Even the most politically divisive proposal  — ending qualified immunity and allowing people to bring civil lawsuits against police officers and departments — is backed by 45 percent of Republicans, though 40 percent oppose the idea.

Voter support for the specific measures — which have been mainstays of Black Lives Matter-era reform plans since the 2014 police killing of Michael Brown in Ferguson, Mo. — comes amid a debate on Capitol Hill over just how much the government should tighten the guardrails on police behavior.

Related: Movement to ‘Defund The Police’ Isn’t Popular, but Voters Are More Open to Its Goal

The House and Senate are considering dueling legislation on the issue this week. While both measures would establish a national database of police disciplinary records, the Congressional Black Caucus-backed House plan would end qualified immunity and ban chokeholds and no-knock warrants. The Senate bill, led by Tim Scott of South Carolina, the chamber’s only Black Republican, would incentivize police departments to hire mental health experts to assist officers, but stops short of an all-out ban on chokeholds and no-knock warrants and instead would institute measures to discourage them.

Scott has criticized the qualified immunity provision in the House bill as a “poison pill” for Republicans, though Sen. Mike Braun has ceded some ground: On Tuesday, the Indiana Republican introduced a bill that would scale back protections for officers, putting him at odds with the White House, which has called touching the legal doctrine a “total and complete non-starter.”

Meanwhile, Democrats say Republicans aren’t doing enough to address the topic of policing reform. In a Tuesday letter, Senate Minority Leader Chuck Schumer (D-N.Y.) and Sens. Kamala Harris (D-Calif.) and Cory Booker (D-N.J.) said Scott’s proposal was a “woefully inadequate response” and called on the chamber to consider “real and meaningful reforms” like those in the House bill. 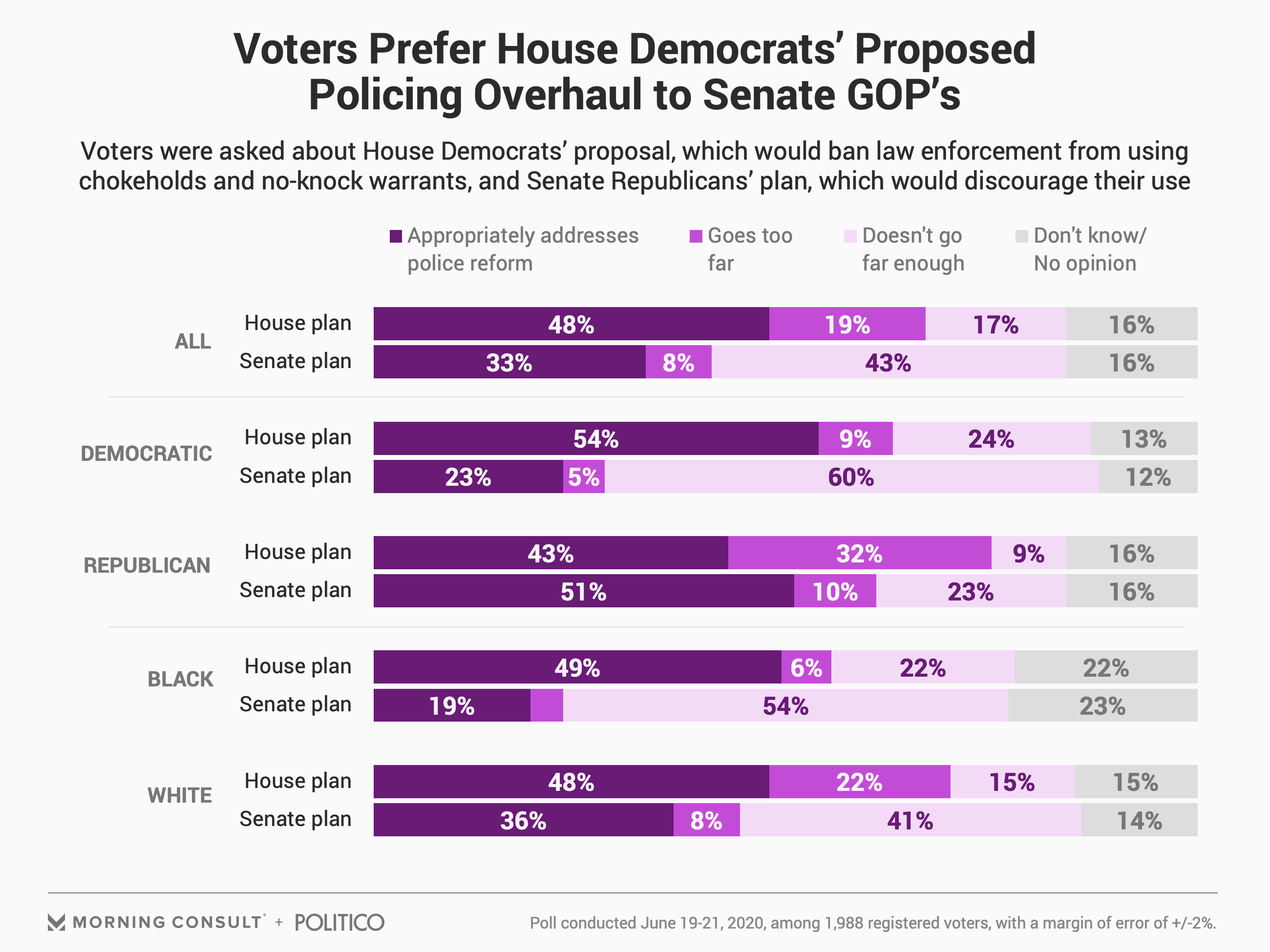 That view aligns them with the majority of Black voters (54 percent), as well as 43 percent of voters overall, who said the Senate plan as described in the poll doesn’t go far enough to address police reform. A third of voters, including roughly half of Republicans, said the Senate measure appropriately addresses police reform.