Joseph Fons holds a Pride Flag in front of the U.S. Supreme Court building after the court ruled that LGBTQ people cannot be disciplined or fired based on their sexual orientation on June 15 in Washington, D.C. A new poll shows that more than 7 in 10 voters support the Supreme Court decision, while 55 percent back the high court's ruling blocking the Trump administration's efforts to end DACA. (Chip Somodevilla/Getty Images)
By Cameron Easley

The Supreme Court delivered two major rulings last week: banning discrimination in the workplace on the basis of sexual orientation and gender identity, and invalidating the Trump administration’s attempt at ending deportation protections for young people who were brought to the country illegally as children.

Both decisions are popular with most Americans, according to a new Morning Consult/Politico poll, though a higher share of voters back the workplace discrimination ruling.

Seventy-one percent of voters in the June 19-21 survey supported the high court’s landmark June 15 decision that protections for gay and transgender workers are included in Title VII of the Civil Rights Act of 1964, which prohibits employment discrimination based on sex.

Fifty-five percent, meanwhile, backed the court’s determination on June 18 that the Trump administration had failed to reasonably explain its rationale for ending the Obama-era Deferred Action for Childhood Arrivals program, which temporarily protects so-called Dreamers from being removed from the United States.

The poll was conducted among 1,988 registered voters, with a margin of error of 2 percentage points. 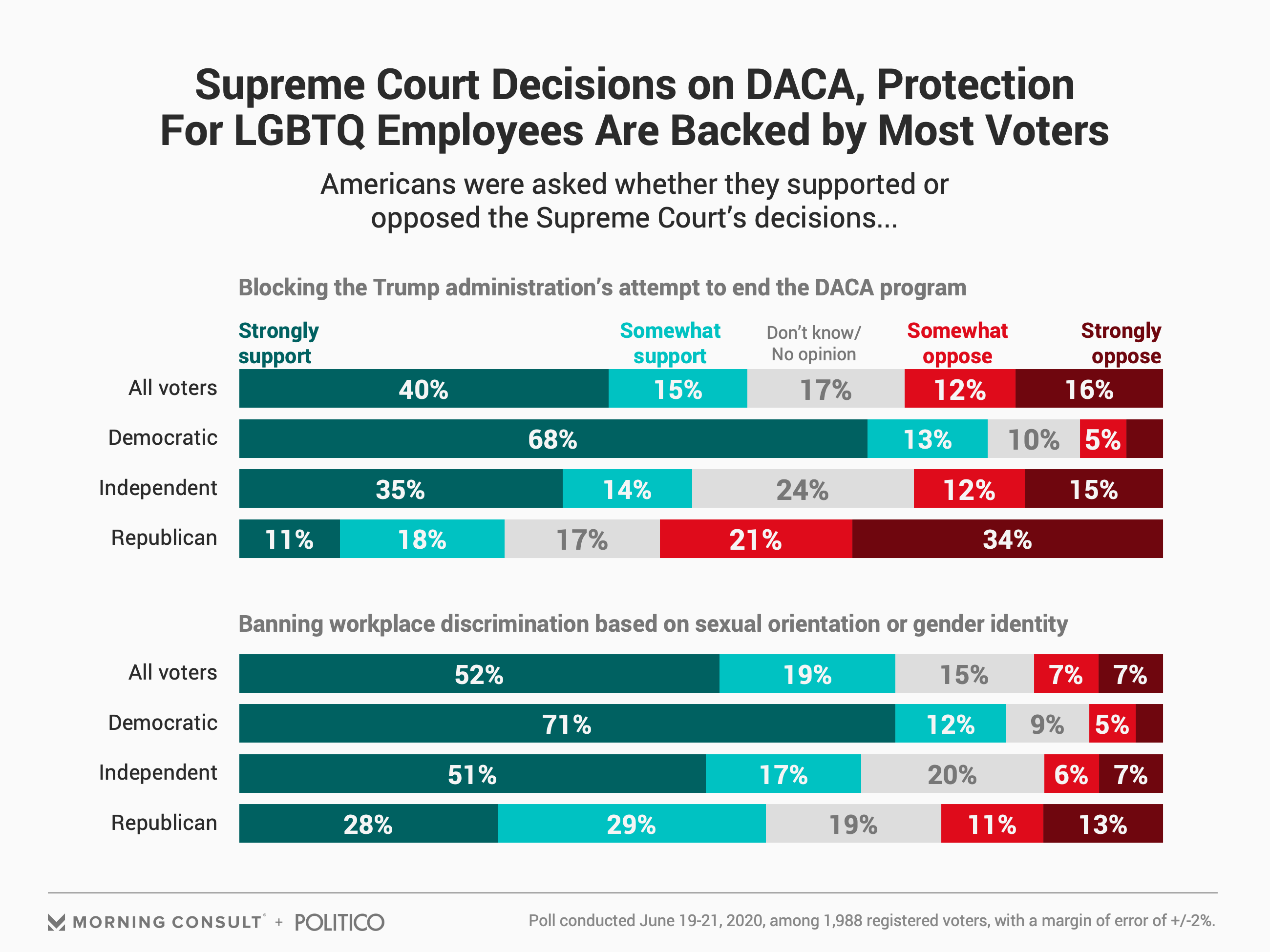 While Democratic officeholders roundly cheered the decisions, the Supreme Court’s moves angered some Republicans: Sen. Josh Hawley (R-Mo.) accused the justices of going beyond their brief and crafting policy from the bench with their 6-3 ruling on workplace discrimination, a decision that drew the ire of social conservatives and the religious right. And on the day of the DACA ruling, President Donald Trump lamented the “horrible” and “politically charged decisions,” calling them “shotgun blasts into the face of” conservatives and Republicans.

The latest survey found GOP voters were much more likely to find fault with the DACA ruling than with the decision on workplace discrimination. Most Republicans (55 percent) opposed the court’s decision to block the Trump administration’s maneuver, compared with 24 percent who said the same of the workplace discrimination ruling. And while just 13 percent strongly opposed the victory for LGBTQ advocates, 34 percent said they were strongly against the DACA decision.

Related: GOP’s Aspiring LGBTQ Candidates Can Point to the Power of Association

Though Trump said his administration plans to refile its paperwork to shutter the DACA program, he also called for new justices, promising to release a list of potential picks by Sept. 1. It’s a return to a 2016 campaign tactic that helped compel conservatives to vote for Trump despite misgivings about the president’s suitability for office.

Seats held by liberal justices such as Ruth Bader Ginsburg, 87, and Stephen Breyer, 81, are coveted by conservatives, and Republican strategists hope to make the Supreme Court a winning issue like it was four years ago, when Senate Majority Leader Mitch McConnell (R-Ky.) famously blocked President Barack Obama’s nomination of Judge Merrick Garland to replace late Justice Antonin Scalia ahead of the general election.

Trump’s selections of two conservative jurists, Neil Gorsuch and Brett Kavanaugh, kept the court from leaning left in the wake of Scalia’s death and Anthony Kennedy’s retirement, but it did not alter the panel’s ideological 5-4 conservative majority. Nonetheless, voters today are much less likely to see the court as liberal than they were during the Obama administration. 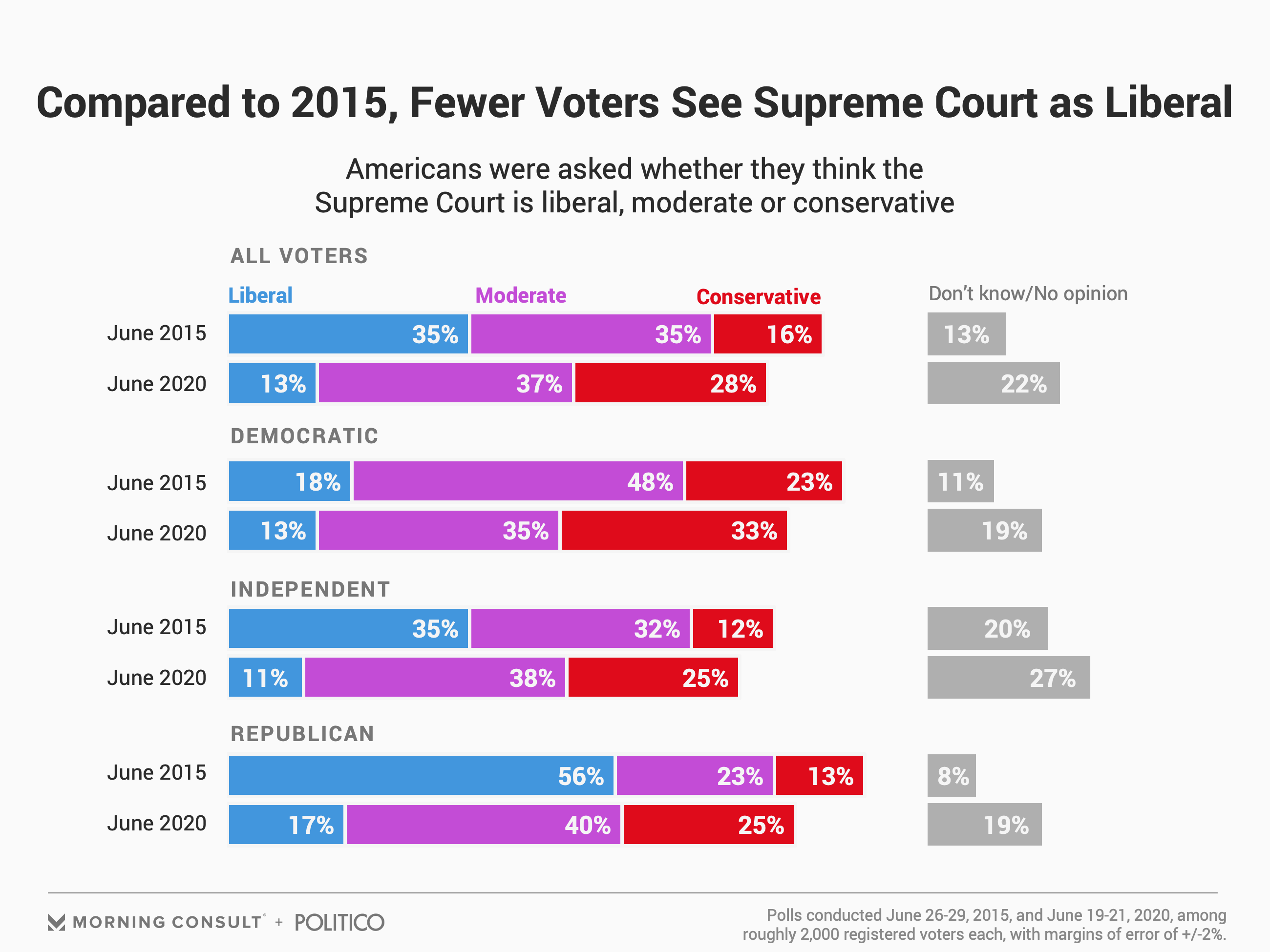 Thirteen percent of voters said in the new poll that they see the court as liberal, down 22 points from a June 2015 survey, which also had a 2-point margin of error. And more than a quarter (28 percent) of the electorate now says the court is conservative, up 12 points from five years ago.

That movement is driven largely by Republicans: Fifty-six percent of GOP voters considered the court to be liberal in 2015, compared to 17 percent who say the same now. While Democratic voters are nearly split on the court’s ideological leanings (35 percent say it’s moderate and 33 percent say it’s conservative), a 40 percent plurality of GOP voters believe the Supreme Court is moderate.