New self-reported data from some of the biggest U.S. electric companies shows those emitting the least carbon per megawatt hour have taken three different avenues to their low rates, with the three topping the list boasting high shares of renewables, natural gas or nuclear in their resource mixes, respectively.

Edison Electric Institute, an association representing all investor-owned electric companies in the country, worked with the World Resources Institute to create a database of carbon emission intensity, among other information, for electricity delivered by distribution company. The database was made public on June 18.

Morning Consult’s analysis of the 2019 data found that the carbon intensity of eight of the biggest U.S. companies, defined by the volume of electricity they delivered to customers across all their distribution companies, varied widely. 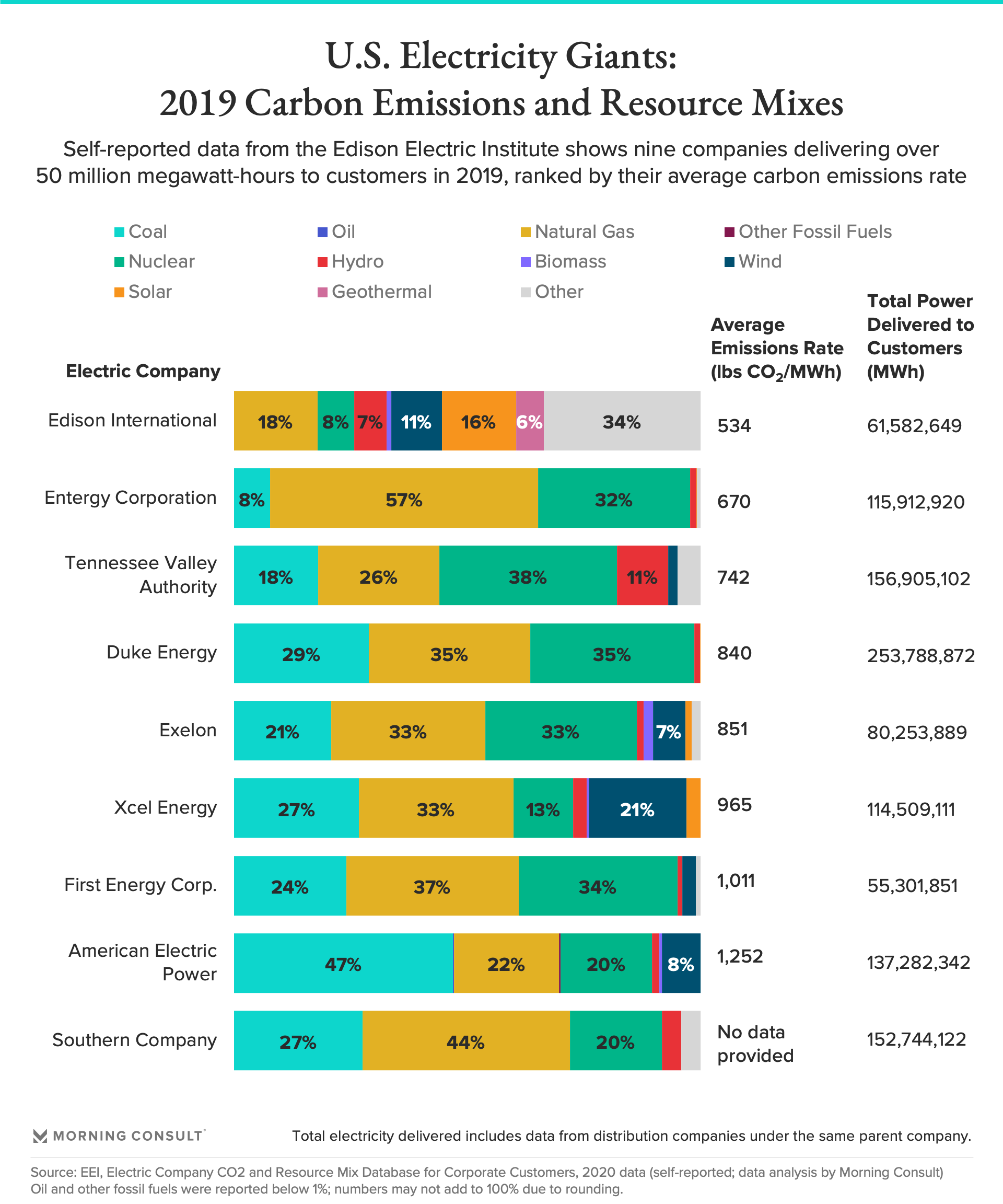 At the low end was Edison International, with 534 pounds of carbon dioxide per MWh, and at the high end was American Electric Power with 1,252 lbs. CO2/MWh. The companies range in size and geography, with some having easier access to renewable energy and nuclear resources as a function of their location.

The companies analyzed each sold more than 50 million megawatt hours of electricity in 2019; Southern Co., with roughly 153 million MWh, did not provide emissions data.

The stated goal of the database is to help EEI members to calculate their Scope 2 carbon emissions under a standardized corporate reporting system, and potentially to support disclosure of sustainability goals as well.

The data includes carbon emissions intensity rates for each distribution company both with and without accounting for renewable energy certificates; Morning Consult’s analysis relied on the former. The analysis also combined delivered electricity numbers across the subsidiary distribution companies in order to get a more accurate picture of the parent company as a whole.

“As leaders in the clean energy economy, this new centralized resource supports corporate customers in their sustainability reporting, reaffirms our industry’s ongoing rapid transformation to reduce carbon emissions, and demonstrates how our clean energy transformation benefits customers,” EEI wrote in its user guide for customers.

The companies with the lowest emissions rates — Edison International, Entergy Corp. and Tennessee Valley Authority — are also those that have the lowest use of coal in their overall resource mix.

In fact, Edison’s distribution company Southern California Edison does not own or have specified contracts with coal generation at all and relies instead on a mix that includes natural gas, wind, geothermal and solar, as well as an “other” category. The “other” category is dominated by unspecified energy that is not traceable to a specific generating facility, such as electricity traded through open market transactions administered by the California Independent System Operator. This electricity typically comes from a mix of resources dominated by natural gas and increasingly renewables.

Edison reported that its low emissions help it to meet California’s Renewables Portfolio Standard requirements, which mandates that the SCE deliver 100 percent carbon-free power by 2045.

In contrast, American Electric Power relies on coal for the largest share of its generation (46.8 percent) and has the highest overall emissions rate. The company operates largely in coal country (across Appalachia) and reports that its transition from coal is “well underway,” having retired, sold or converted to natural gas 12,339 MW of coal-fueled generation in the last decade.

And by 2030, the company reports that it plans to add 4,149 MW of solar, 3,935 MW of wind and 1,607 MW of natural gas to its resource mix, and invest $2.1 billion in contracted renewables between now and 2024. AEP already has approval to acquire and jointly own three wind generation facilities in Oklahoma, which will be completed between now and the end of 2021.

While many companies addressed a need for more renewables in their qualitative reports to EEI, Duke Energy Corp. is the only one that specifically mentioned the need to address risks from climate change as a part of its responsibility. The company, which ranked fourth with its average carbon emission rate of 840 lbs. CO2/MWh, has recently accelerated its emission reduction plans, with a goal of achieving net zero emissions by 2050. At present, its resource mix is fairly equally divided between coal, natural gas and nuclear.

The database does not include all electricity companies in the United States; about half of EEI’s member companies provided data, representing about 43 percent of electricity sales in the country. The trade association plans to incorporate new data as it becomes available and will post updated member company carbon emissions intensity rates and electricity mix information annually by June 1 for the prior two calendar years.

Some but not all of the reported carbon intensity rates have been third-party verified by the Environmental Protection Agency or the Climate Registry’s General Verification Protocol.

Correction: This story and its accompanying graph were corrected on June 30, 2021, to reflect an updated analysis of average emissions rates. The original analysis used a simple — rather than weighted — average of subsidiary companies’ emissions rates to calculate the overall 2019 rates, which skewed the result slightly for several companies and more significantly for Duke Energy. The company’s correct average emissions rate is 840 lbs. CO2/MWh, not 1,207 lbs. CO2/MWh.