The Mask Debate Isn’t Just About Saving Face. Adults Who Wear Them and Those Who Don’t Explain Why.

Protection of self and others, right to choose, doubts about COVID-19 emerged as themes in open-end responses

26% of adults who don’t wear masks said they think they are not effective. (Yulia Reznikov / Getty Images)
By Brian Yermal Jr.

What started as a simple public health recommendation to limit the spread of the novel coronavirus has morphed into a public display of the country’s partisan divide: Do you wear a mask or not?

The Centers for Disease Control and Prevention recommends it. President Donald Trump has refused to wear one in public. Some Republican lawmakers have mocked them, while nearly all Democratic lawmakers and a growing number of GOP officials are encouraging their constituents to don one. Every other day, a new report goes viral showing maskless patrons visibly upset after being denied access or services at certain businesses that mandate their use.

Amid the culture clash over masks, a new survey delved into the debate by asking the public to describe in their own words how they feel about wearing face coverings as well as their thoughts on those who do and don’t use them. 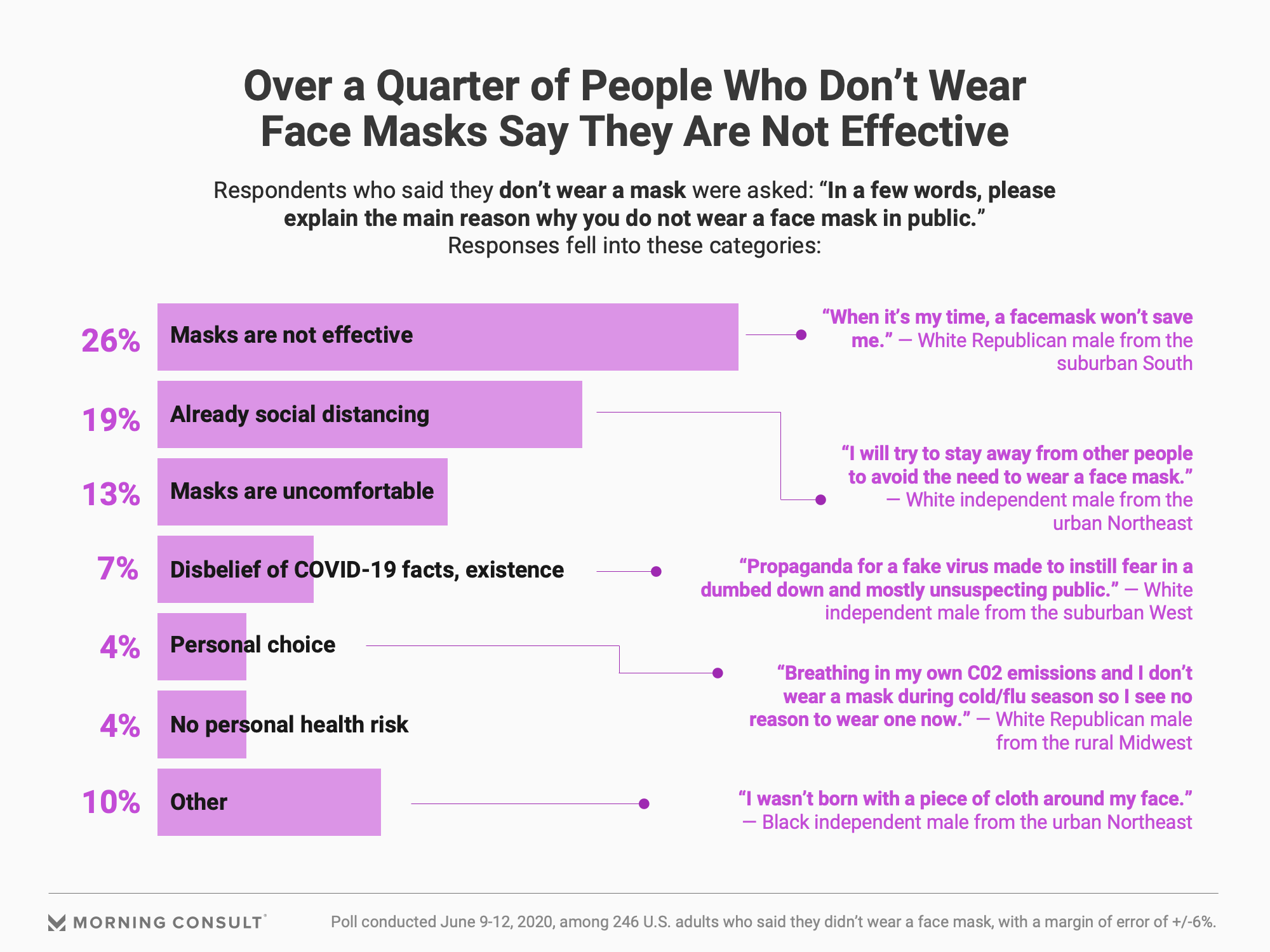 In a Morning Consult analysis conducted in June, 2,197 adults were asked whether they wear face masks and then provided a blank space to say why they do or don’t, as well as how they feel about mask-wearers and maskless people alike. The data was then compiled into groupings to find trends among respondents.

No dominant reason emerged from analyzing responses of the 11 percent who said they do not wear face masks. The most common refrain from those respondents centered on masks’ alleged ineffectiveness, despite U.S. and global health officials touting the ability of cloth coverings in limiting the aerial spread of respiratory droplets containing COVID-19. Nineteen percent of responses mentioned something about practicing social distancing, thus negating the need to wear masks, while 13 percent said they don’t wear them because they are uncomfortable.

While respondents who don’t wear face masks were relatively split in their rationales for doing so, there was a clear consensus among mask-wearers for why they choose to cover their faces.

The polling was conducted June 9-12, just before the number of confirmed COVID-19 cases in the South and West began to rise, with some governors in those states now requiring face masks in public places. 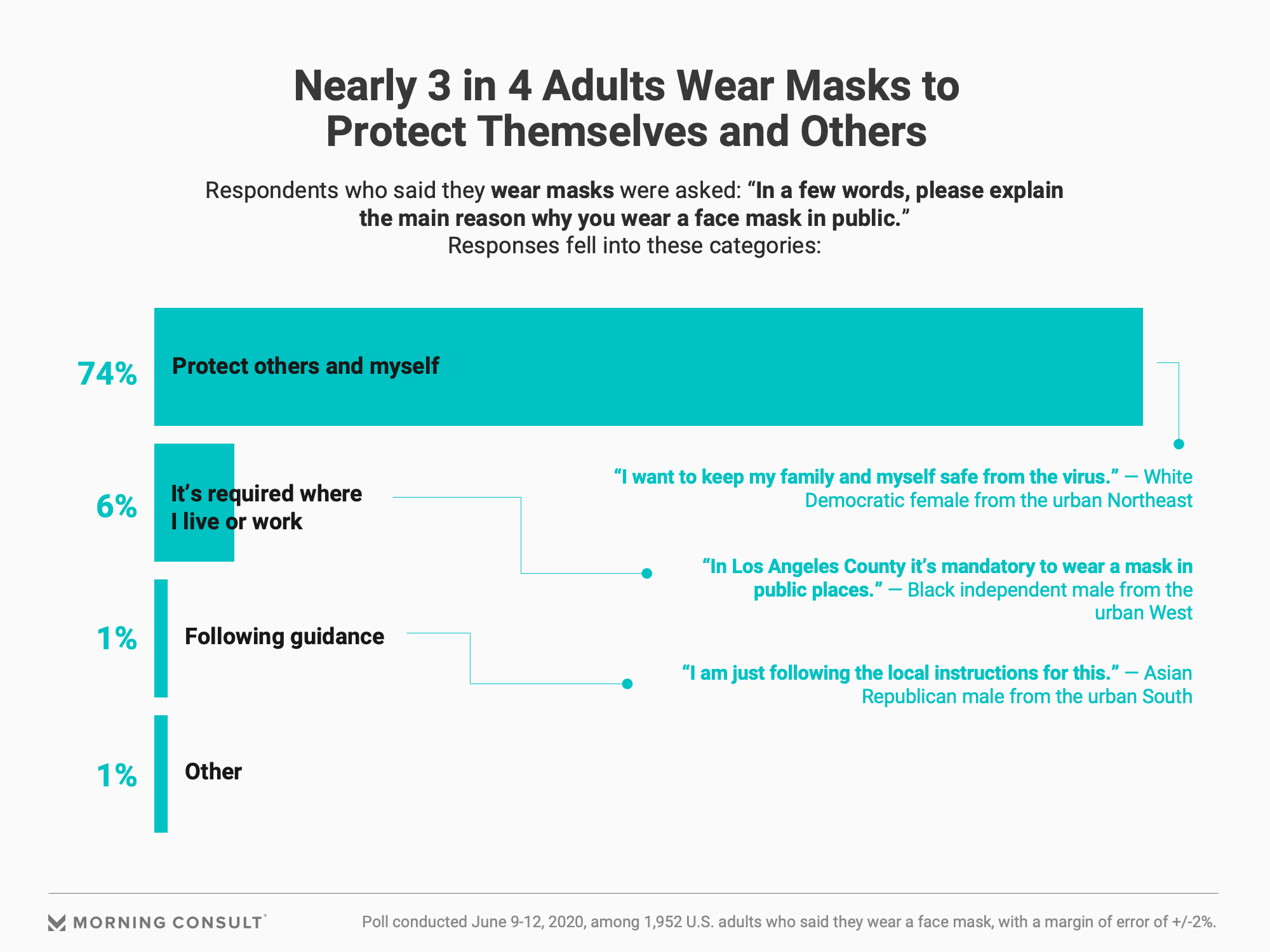 Nearly 3 out of 4 adults said they wear masks to protect themselves and others. The next closest cluster of responses, at 6 percent, included people who said they wear the coverings because they’re required to, while 1 percent said they were following guidelines, in most cases recommendations from the CDC.

The data also pointed to some demographic similarities — and several differences — between the two groups.

For example, while gender and age breakdowns were relatively equal, the anti-mask camp was more white (89 percent vs. 79 percent) and Republican (50 percent vs. 31 percent) than the pro-mask cohort. 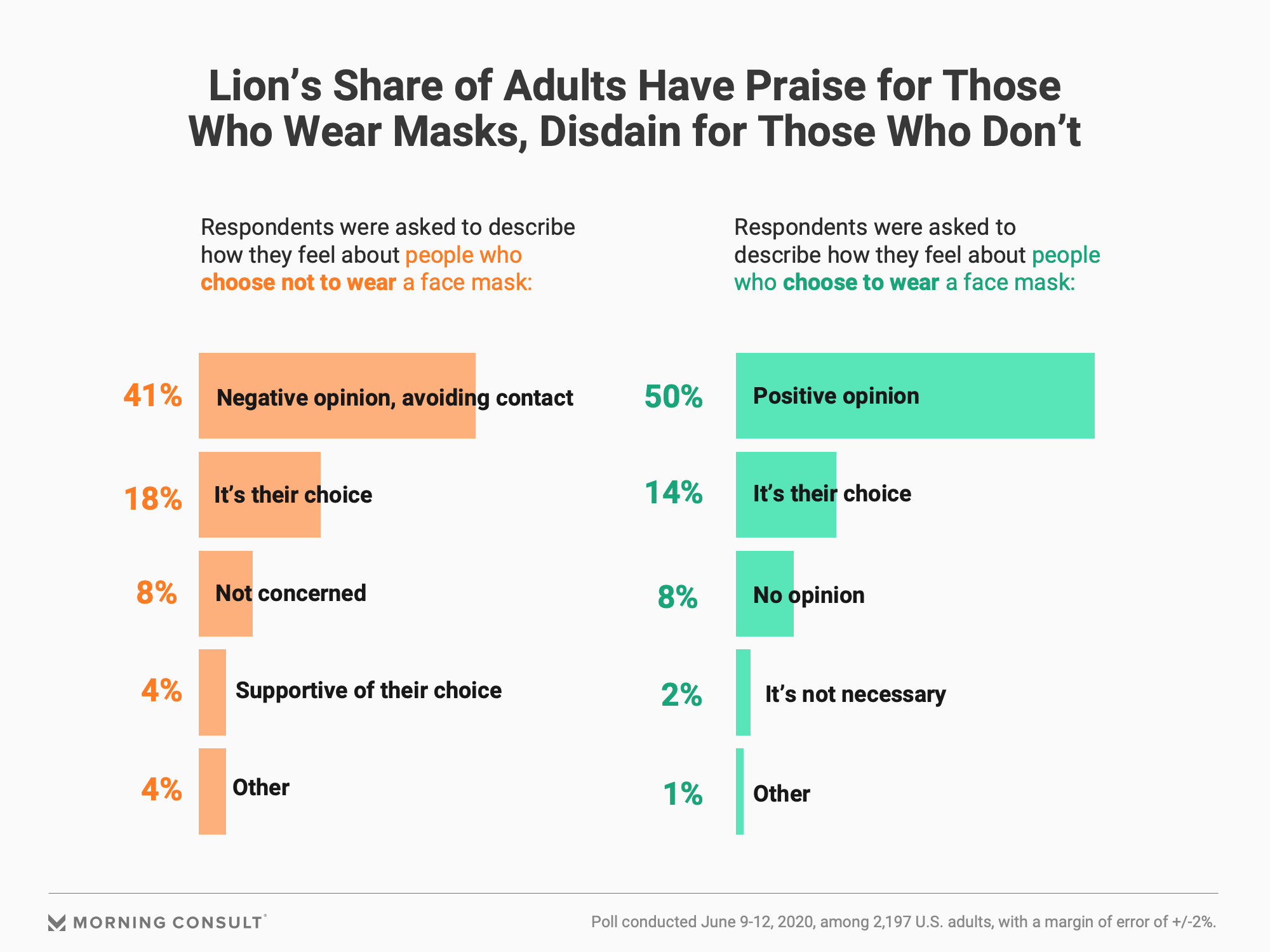 Discussions of face-mask usage have included stories of “mask shaming”: people ridiculing others in public for either wearing or not wearing masks. While a number of anecdotes about face masks can be found in myriad media sources and social media platforms, the Morning Consult poll allowed respondents to share their thoughts on both groups, helping to provide a more holistic view of the sentiments surrounding the issue.

The public overall is slightly more likely to praise people who choose to wear a face covering as they are to hold a negative opinion toward those who decide not to wear one. A smaller share, but nearly the same for both groups, said wearing one or not wearing one is ultimately their choice. 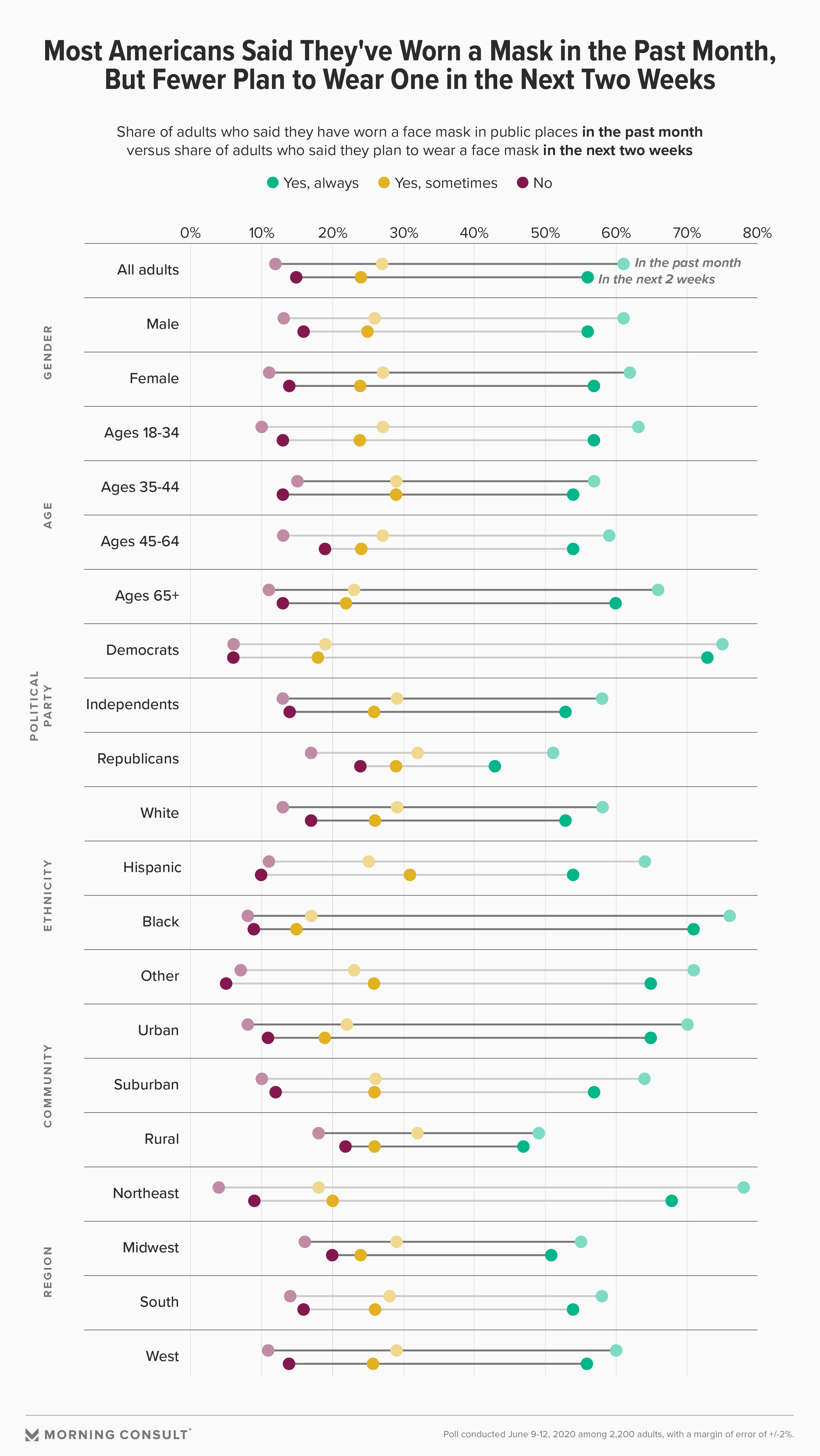 And while the vast majority of U.S. adults said they’re currently wearing face masks and plan to in the future, data from an earlier June poll showed residents becoming more lax about face coverings as more states relaxed their pandemic-related requirements and July 4th weekend approached. Some of the largest declines were among Republicans and residents in the Northeast.

Related: What Is the 2020 Election About? We Gave 4,400 People a Blank Space to Tell Us
Coronavirus Masks