‘They’re Living With It Every Day’: Environmental Injustices Leave Minorities With Pollution Anxieties

People participate in a national mile-long march to highlight the push for clean water on Feb. 19, 2016, in Flint, Mich. (Bill Pugliano/Getty Images)
By Lisa Martine Jenkins

In 1982, a United Church of Christ commission embarked on a five-year project investigating the demography of the areas surrounding hazardous waste storage facilities, which were associated with potential health problems. Their report — which was the first nationwide examination on the subject — found that the racial makeup of the surrounding community was the most significant predictor of where U.S. hazardous waste facilities were located, more than socioeconomic status or any other factor.

Nearly 40 years later, these racial inequities have largely worsened, resulting in deep divides in how much people trust their immediate environment and its impact on their health. New Morning Consult data shows that Hispanic and Black communities in the United States experience a different environmental reality than their white counterparts, reporting lower levels of trust in their tap water and higher levels of concern about local pollution. 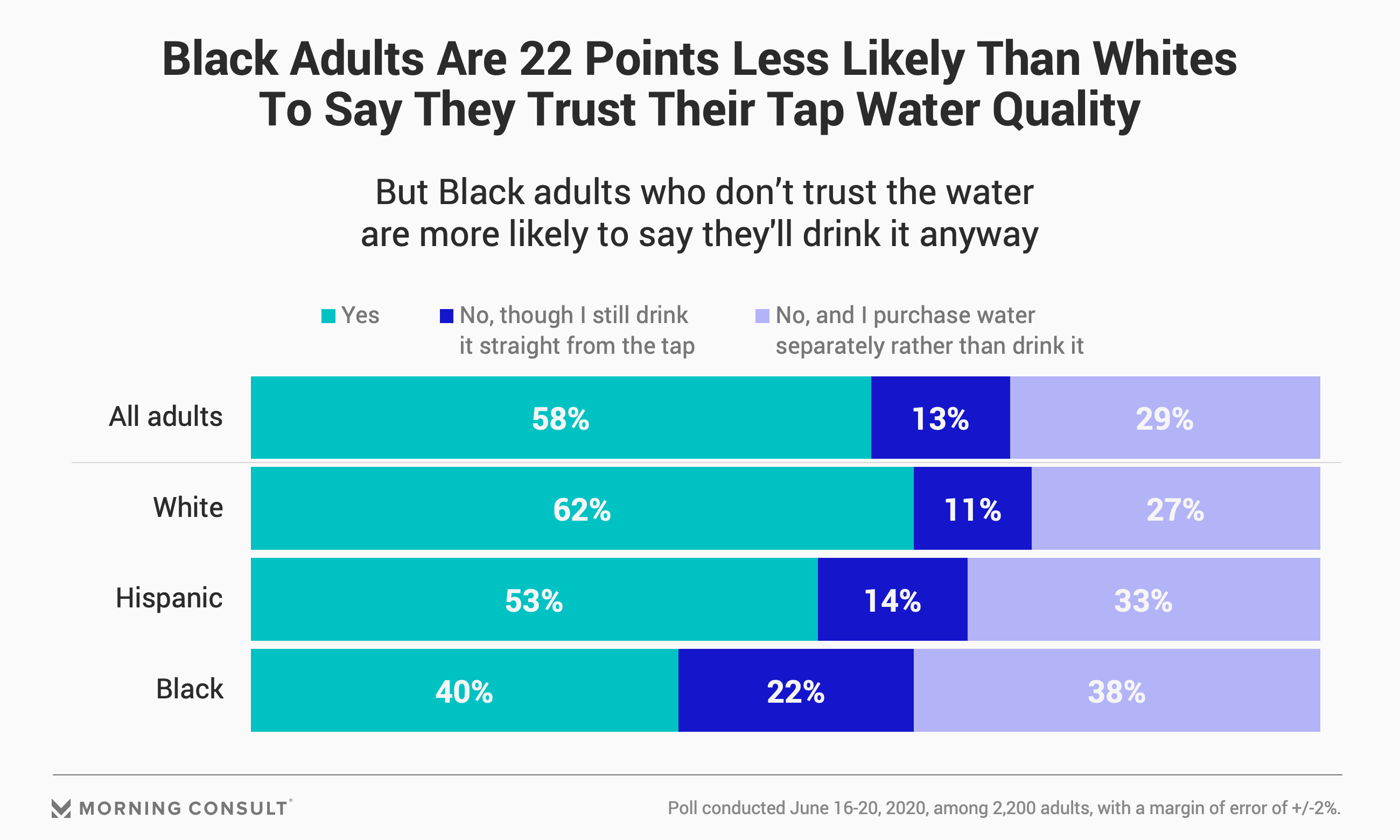 For those who work in environmental justice every day, these divisions don’t come as a surprise.

“The fact that people of color would become more concerned about pollution is because they live with pollution,” said Peggy Shepard, co-founder and executive director of WE ACT for Environmental Justice in New York City. “They’re very aware of pollution; they’re living with it every day.”

And this awareness extends to the quality of their water. Another poll conducted June 16-20 of 2,200 adults found a 22-point gap between white and Black respondents concerning trust in the quality of their tap water — 62 percent and 40 percent, respectively — while Hispanics (53 percent) split the difference. Thirty-eight percent of Black respondents and 33 percent of Hispanics said they purchase water separately rather than drinking what comes out of the tap, compared with 27 percent of whites.

And Black adults are twice as likely as whites to say they don’t trust their water but drink it anyway, at 22 percent and 11 percent, respectively. Fourteen percent of Hispanics said the same. 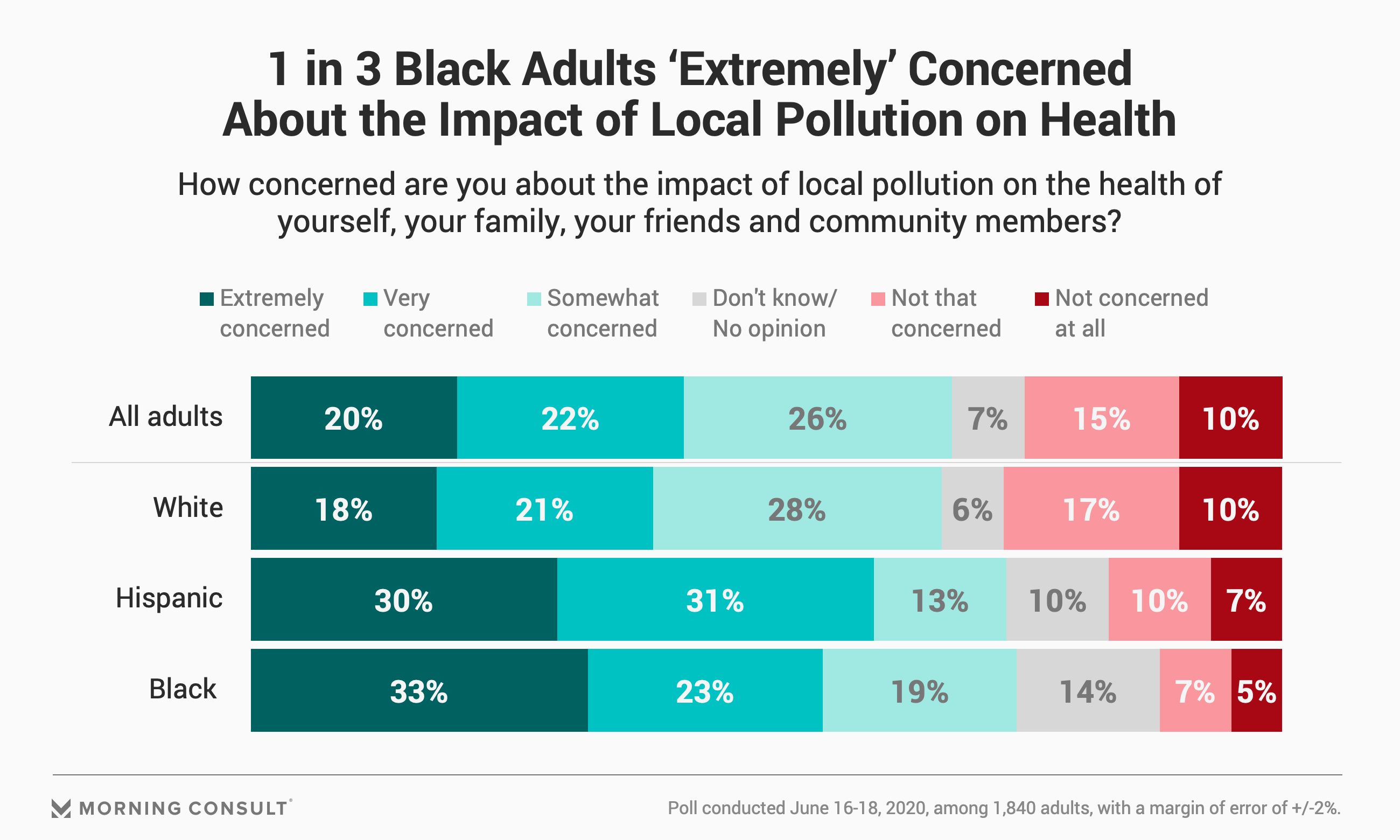 These environmental inequities aren’t the result of any one action, but rather the layering of local, state and federal policies that segregated communities and incentivized white people to leave urban centers.

Both Shepard and Monica Lewis-Patrick — president and chief executive of We the People of Detroit, which organizes for water quality in the city, among other community initiatives — referenced the 1944 G.I. Bill as one such policy that has had repercussions even generations later. The bill provided housing and education provisions to veterans returning from World War II, but its benefits generally didn’t make it to Black veterans because many deeds excluded them from the suburbs, and banks usually would not make loans for mortgages in Black neighborhoods. Over the past seven decades, this has led to chronic under-investment in those communities and has compromised their ability to amass generational wealth.

“And what does housing segregation do? It probably means that everything that you think is polluting or not a good land use goes into the poorest community or the community that you consider ‘other,’” Shepard said. “Not all Black communities are poor, of course, but you can still see that no matter what the income level is that Black people live in more pollution and have worse health outcomes.”

Michael Mascarenhas, an associate professor in the University of California, Berkeley’s Department of Environmental Science, Policy and Management, has built upon the decades-old research into toxic waste facilities and found that not much has changed since the 1987 study showed that they tend to be placed near communities of color — Black communities in particular. And in some cases, the rate has worsened, according to a paper he co-wrote and prepared for a special issue of Environment and Society: Advances in Research.

“People of color living in host neighborhoods are poorer today than they were a decade ago, revealing the fact that this form of injustice disproportionately burdens low-income communities of color,” Mascarenhas and co-author Ryken Grattet of UC Davis wrote in the unpublished study provided to Morning Consult. Their research found that in 2010, people of color composed 57.2 percent of the population living within 3 kilometers of the census tracts with hazardous sites.

“Something as benign as infrastructure is highly racialized,” Mascarenhas said. “It’s this possessive investment in whiteness that we must become aware of if we’re really going to grapple with the ways in which race and class intersect to disproportionately harm poor people of color, largely located in urban centers in this country.”

The case of Flint

Nowhere has this been more visible than in the predominantly Black city of Flint, Mich., where a cost-saving switch to a new water supply and lack of routine treatment and testing resulted in health complaints and dangerously high lead levels in local children’s blood starting in 2014. After years with compromised water quality and at least 15 criminal cases filed against government employees, Environmental Protection Agency Administrator Andrew Wheeler said in June 2019 that the city’s water was “safe to drink,” though local activists and Flint leadership have doubted that fact. Mayor Karen Weaver has steered residents toward bottled water until all of Flint’s damaged pipes are replaced, and the city’s residents have put their confidence in a body of their own creation: the nation’s first youth-led water testing lab, in partnership with Freshwater Future and the University of Michigan.

Lewis-Patrick attributes the foundation of this project to residents’ low levels of trust in their government; the model has been replicated in her own community of Detroit — which has had similar struggles with water quality and increasingly with affordability —  as well in Chicago, Toledo and other cities. Lewis-Patrick said that these kinds of experiences create a new generation of “water warriors and water protectors,” altering the psychology of even the community’s youngest members.

“Anytime you’ve had that kind of intimate encounter around water quality, you never forget it,” she said. “And you always start to question, from that moment forward: ‘Can I trust what I’m drinking? Am I drinking poison?’”

Mascarenhas, who in 2017 served as an expert witness on the Flint Water Crisis at the Michigan Civil Rights Commission, concurs, noting that some of the city’s residents “still have post-traumatic stress. Even if they were told that it was safe, they would still drink bottled water today because their lack of trust is so deep at this point.”

Related: Support for Black Lives Matter Stretches Over to the Other Side of the Atlantic

The organizers and the future

The factors impacting both pollution and water quality are by no means new, and the subject of environmental justice has seen attention for decades from academics, activists and even policy-makers: the EPA has an Office of Environmental Justice, in fact. But even so, Shepard says the subject has seen little acknowledgement by the media and mainstream green groups until recently.

“I keep hearing myself say it’s been going on for years and we know it’s been reported, but somehow it has not permeated the American psyche: that it is a systematic discrimination across the board in every sector of life,” she said.

But Shepard said the confluence of the coronavirus pandemic and protests over the killing of George Floyd in police custody in May — as well as the greater reckoning over racism that has resulted from the latter — have improved public understanding of the links between the environment, health and systemic racism. And a highly publicized Harvard study that traced higher coronavirus mortality rates in Black communities to poor air quality has helped that process, along with a recent Rhodium Group report that elaborated on the overlap between environmental health problems and the pandemic’s disproportionate impact on Black, Latino and Indigenous communities.

“These institutions — whether it’s infrastructure, education or policing — have failed most people of color in this country for decades now,” Mascarenhas said of how environmental racism fits into the bigger picture.

Consequently, Shepard said people are waking up to the “continuum” of racism across sectors, leading to concrete action including financial support from well-funded environmental groups for the historically under-resourced environmental justice community.

On the other hand, Shepard said that this period has demonstrated that a faction of the country simply does not prioritize public health. A stark and increasing resistance to wearing masks and social distancing has contributed to a recent increase in coronavirus infections, an “incredible selfishness” that leaves Shepard more skeptical of the country’s willingness to combat pervasive environmental health issues.

And the reality of divided politics complicates things further. For instance, just last week a committee of House Democrats released a long-awaited report that could serve as an outline of the party’s future policy-making, which frames climate change as an environmental and racial injustice problem and calls for the government to prioritize minority communities in future infrastructure spending. While Shepard applauds the progress that this framing illustrates, she also notes that turning this pitch into action likely requires the party to regain control of Congress and the White House.

“There’s plenty of room for optimism in the environmental sector right now,” she said. “But will it be borne out by politics and by public sentiment?”