With New Plague and Swine Flu Concerns in China, 3 in 4 U.S. Voters Are Worried About Another Pandemic 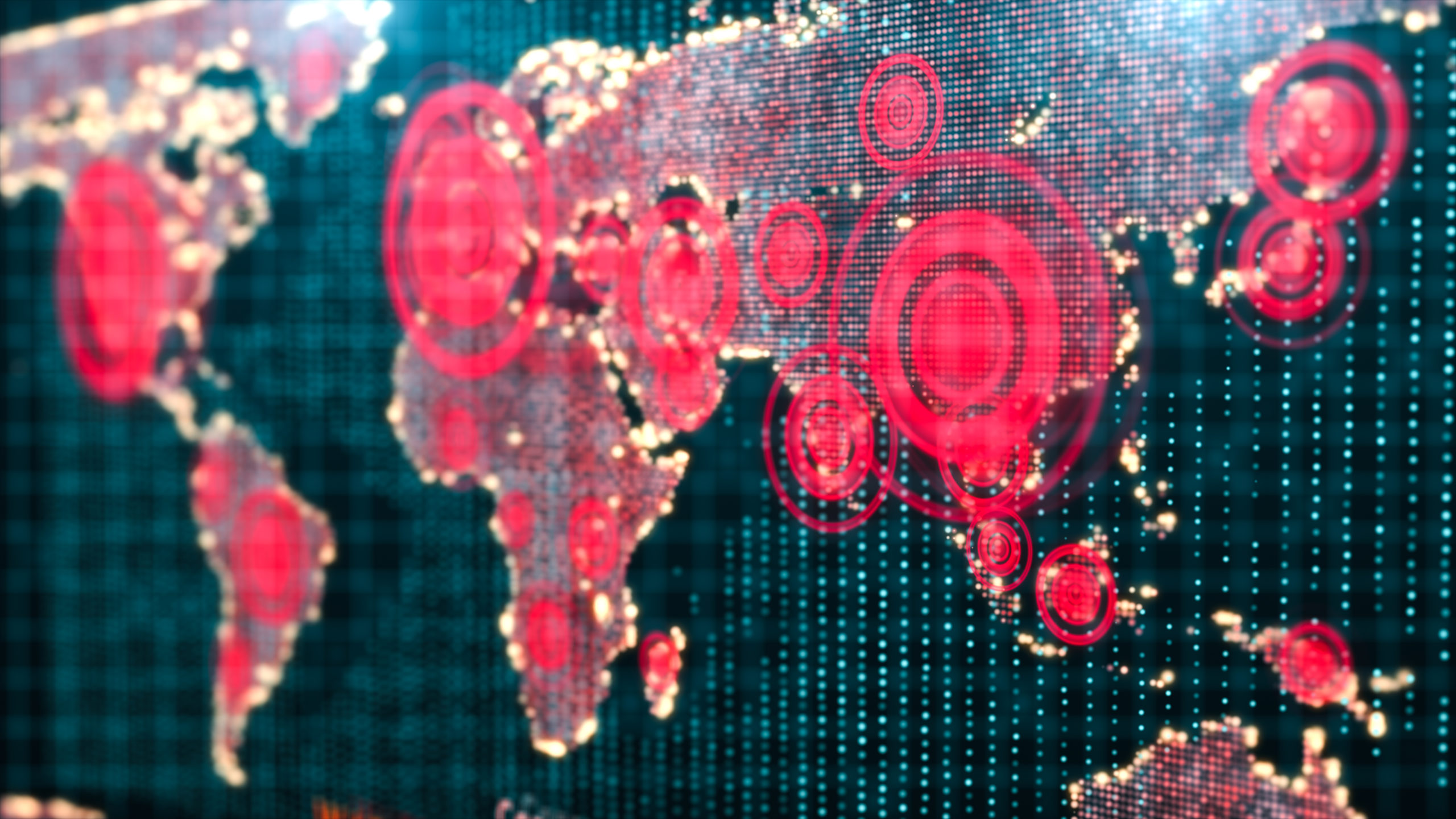 A new Morning Consult survey found that 76 percent of registered voters think it is likely that another pandemic similar to the coronavirus will occur in their lifetime. (Getty Images)
By Brian Yermal Jr.

The United States continues to contend with an ongoing surge of coronavirus cases in several Southern and Western states, but recent reports out of China have raised new concerns about two illnesses associated with previous pandemic-level outbreaks: the swine flu and the bubonic plague.

While both diseases appear to pose little risk to the population at large at this time, they still come as unwelcome news as much of the world continues its monthslong efforts to quash COVID-19. And new Morning Consult polling shows most voters expect and are worried about a similar worldwide viral outbreak in the future. 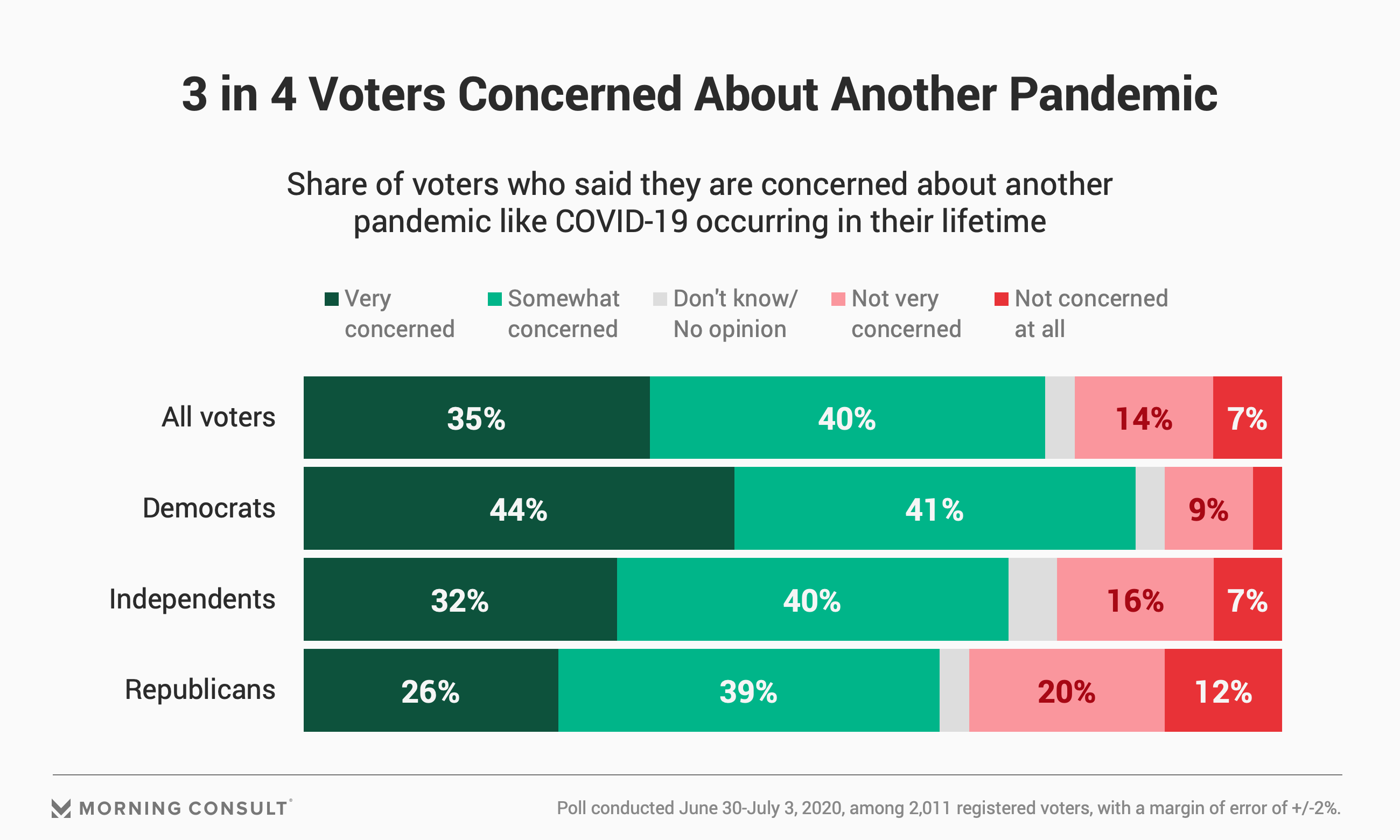 In a new survey, 76 percent of voters said they think it is likely that another pandemic similar to COVID-19 will occur in their lifetime, and a nearly identical share (75 percent) said they are concerned about such an event happening in their future. Democrats and Republicans were about as likely to say a similar pandemic is likely to occur, though Democrats were more likely than GOP voters to say they are concerned about such a global outbreak.

The poll was conducted June 30 to July 3 among 2,011 registered voters and has a margin of error of 2 percentage points.

The concerns over a new pandemic stemmed from a report published last week in the Proceedings of the National Academy of Sciences, which indicated a new strain of swine flu referred to as “G4” could be highly infectious among humans and become a “pandemic virus.” Chinese government officials refuted those claims, saying the strain isn’t new and does not easily infect humans or animals.

And this week, Chinese officials said a herdsman in the country’s Inner Mongolia region was diagnosed with yersinia pestis, the bacterium that caused the Black Death during the Middle Ages, though the person is hospitalized and in stable condition.

While a majority of voters expressed concern about an entirely new pandemic, they are also nearly as worried about a second wave of the current novel coronavirus outbreak at home. 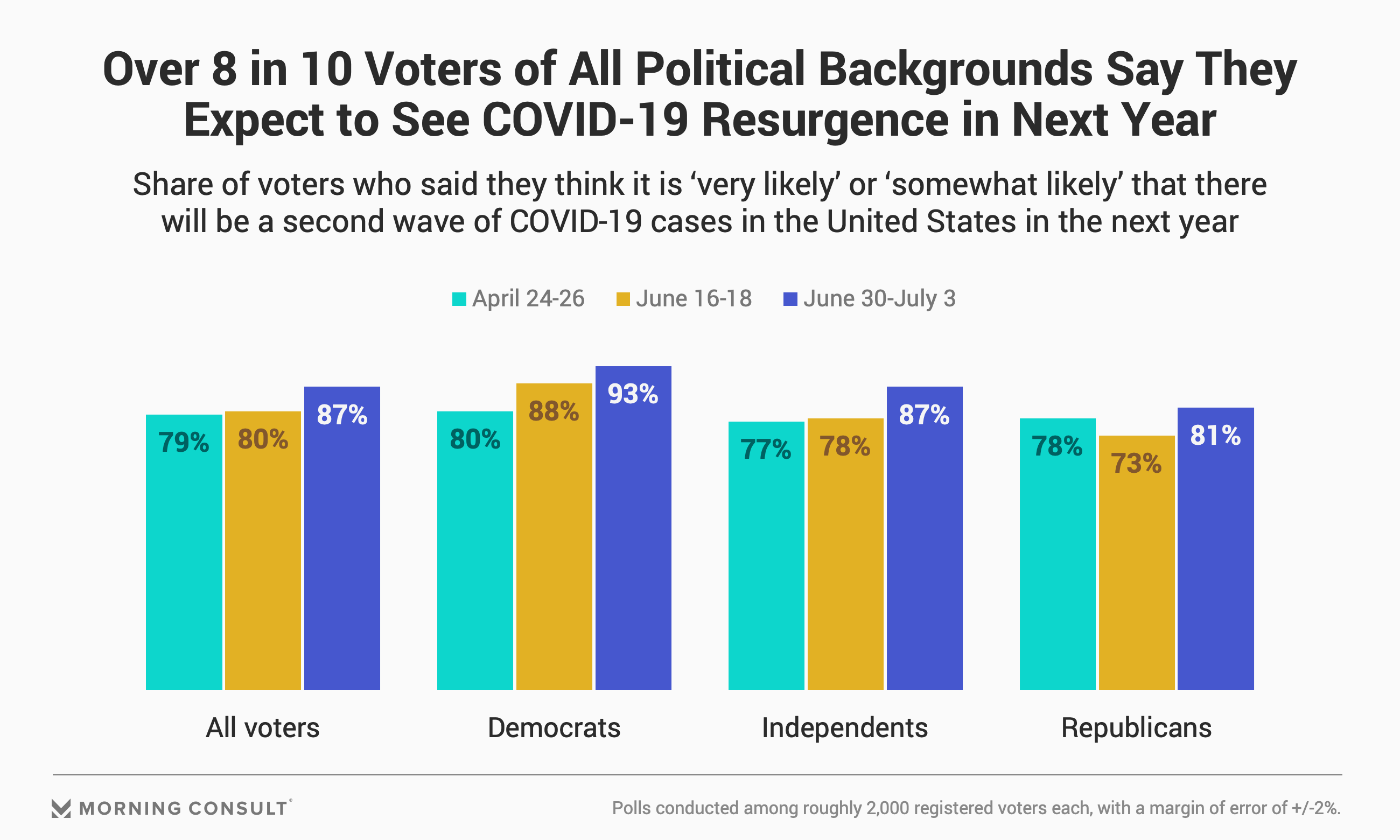 Nearly 9 in 10 voters (87 percent) said they think a second wave of COVID-19 is likely in the United States within the next year, up 7 points from a mid-June poll and an increase of 8 points from when Morning Consult first asked the question in a late April survey. Eighty-two percent of voters said they are concerned about a second wave in the latest poll, including 92 percent of Democrats and 73 percent of Republicans. Growing certainty about a second wave coincides with recent increases in confirmed COVID-19 cases in states such as Florida, Texas and California, though U.S. infectious disease expert Anthony Fauci has maintained that the new spikes in the South and West are still part of the first wave of the pandemic.

The latest bout of COVID-19 appears to have slightly dampened voters’ confidence in the country’s ability to handle certain aspects of a potential second wave. 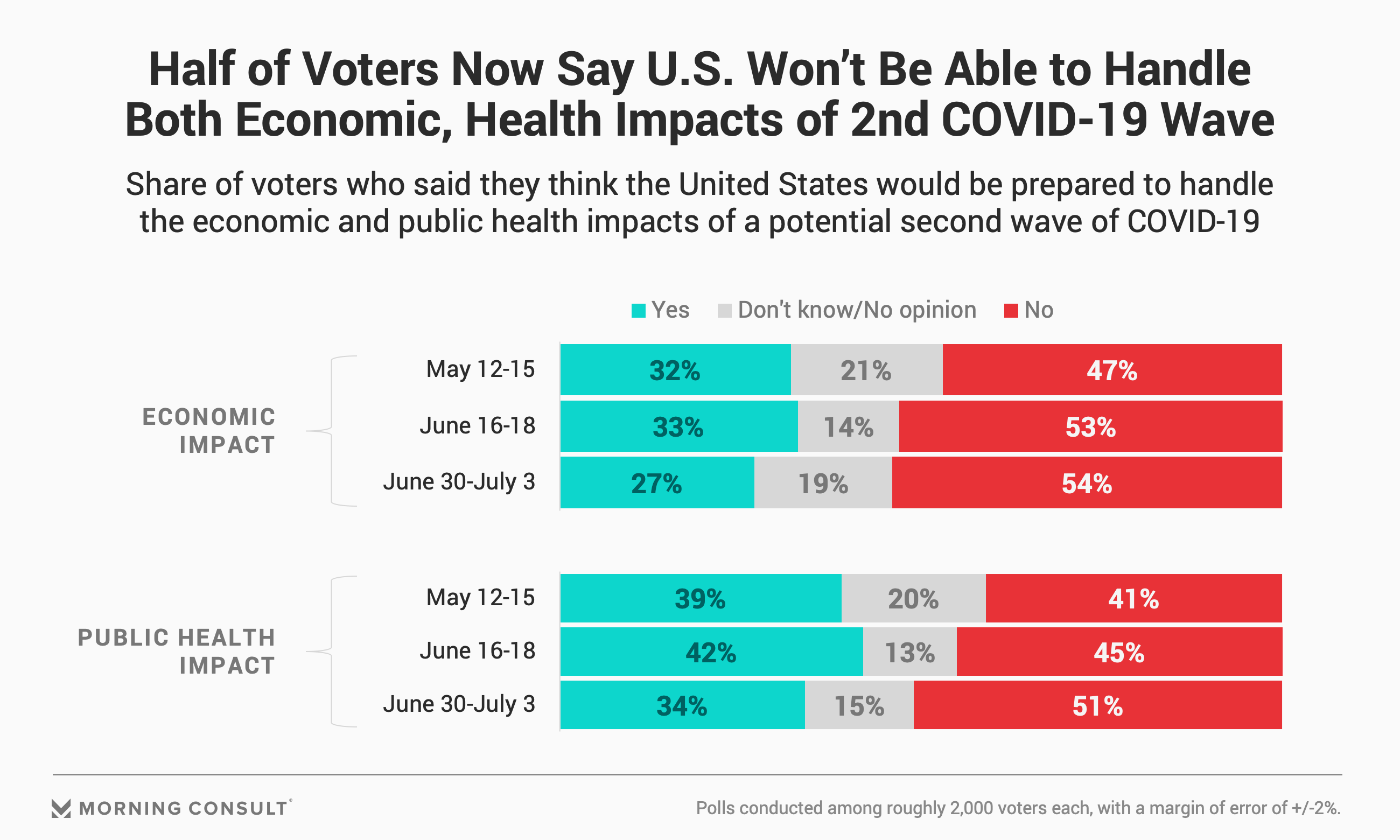 In the latest poll, 69 percent of Democrats and 51 percent of independents said the United States is unprepared for the health impact of a potential second wave, while 55 percent of Republican voters said they think the country could handle it.

Democrats, at 67 percent, were more likely to be pessimistic about the country’s ability to handle the economy amid a second wave than Republicans, with a 44 percent plurality of GOP voters saying the United States would be prepared and a 36 percent share saying the opposite.

All the polls mentioned have a 2-point margin of error.