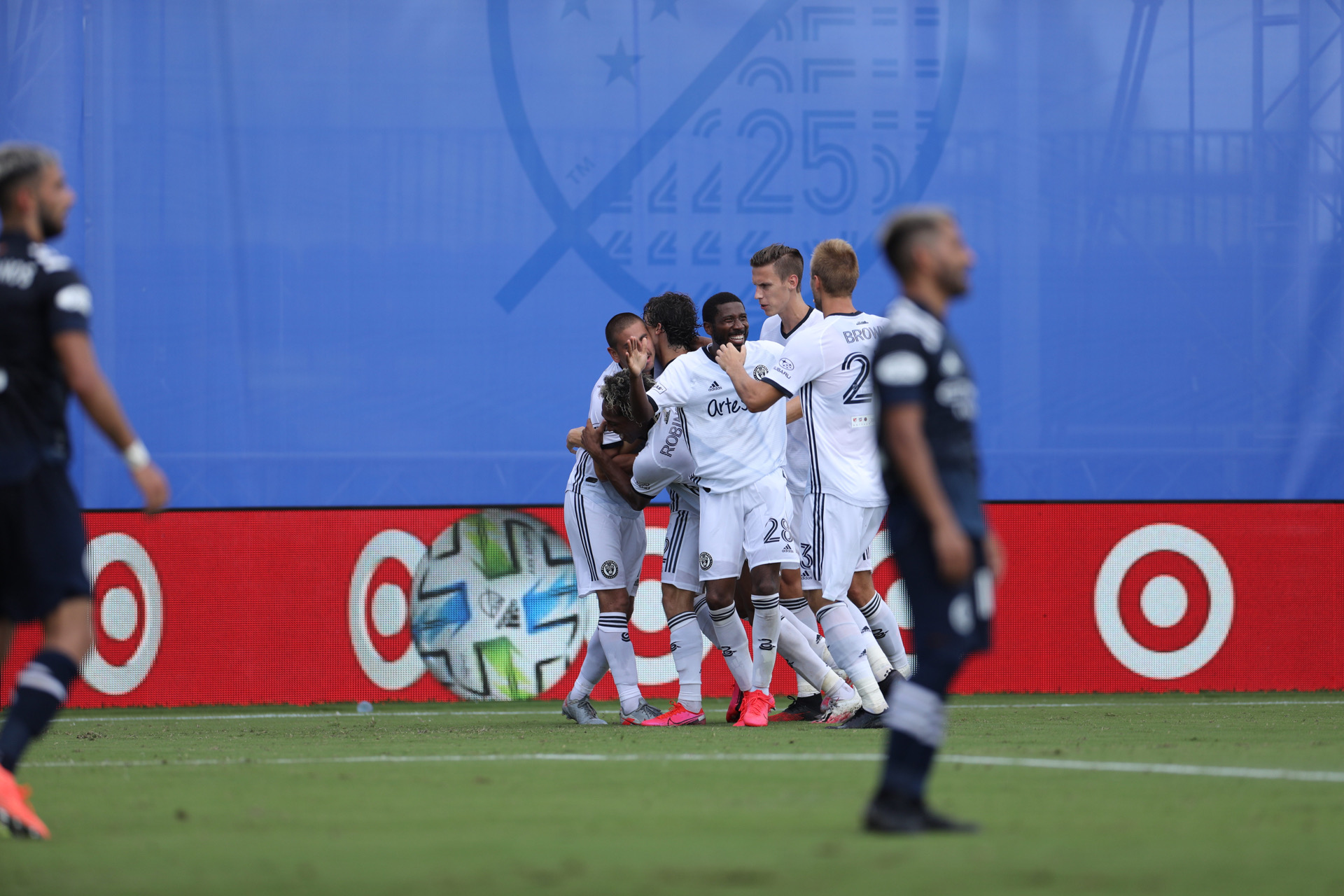 The big picture: Nashville SC became the second team forced out of the tournament this week due to positive COVID-19 tests, a move that seemed increasingly inevitable in recent days. MLS moved the Chicago Fire from Group A to Group B, creating six even groups of four teams. 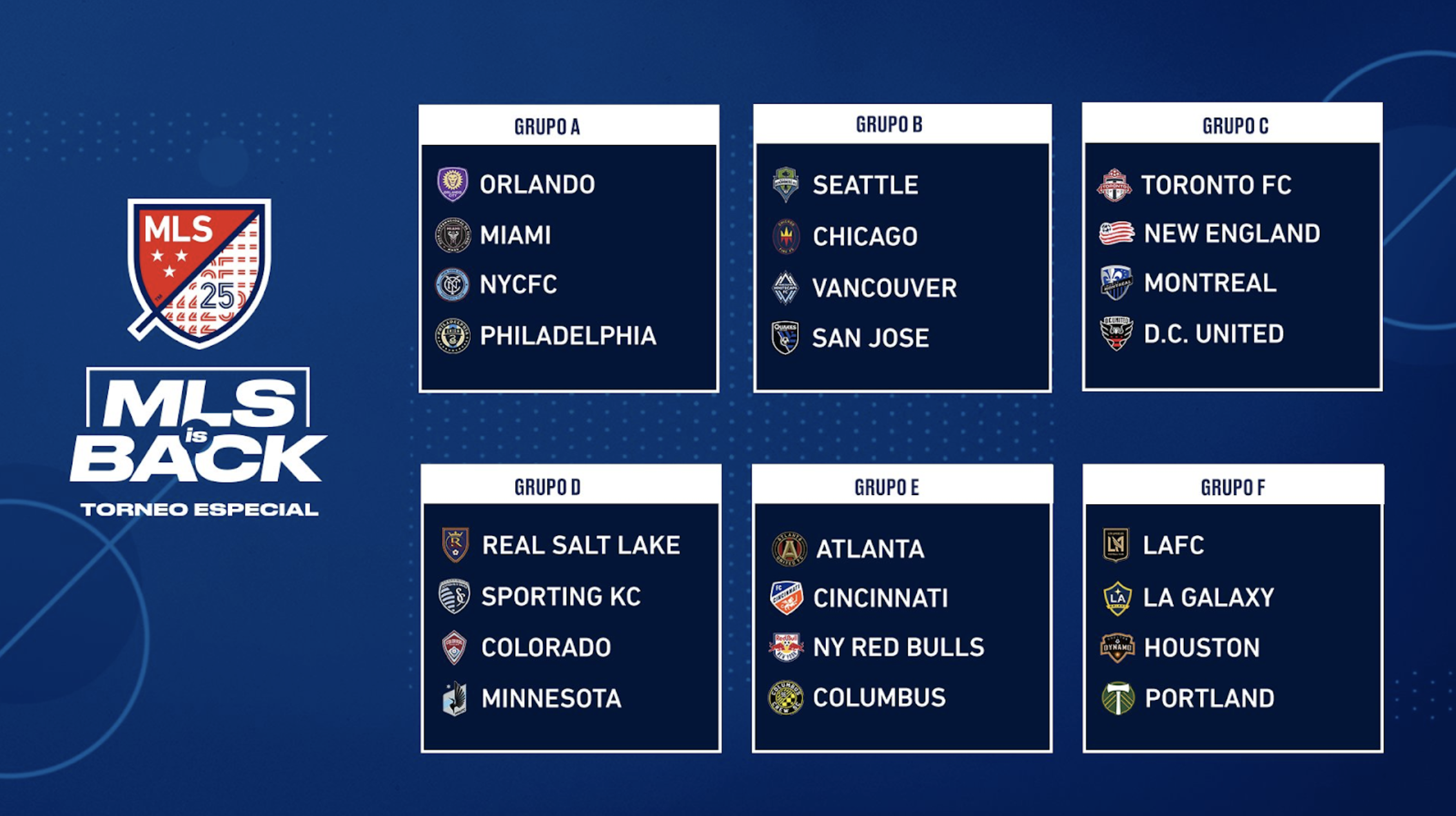 Method to the ad madness: Like every sports property that suspended its season due to the pandemic, MLS and its clubs have ground to make up in delivering value to sponsors. In addition to league-level corporate partners, that includes all 26 clubs’ local market sponsors that typically benefit from in-stadium branding at home games and promotion on local telecasts.

For MLS is Back, the league is spreading its new wealth of on-screen inventory — the product of new virtual ad technology — between both national and club-level partners. I’ve been told that this is the formula:

• All clubs receive an equal share of commercial inventory for each match they play.

• New virtual inventory on the playing surface called “3-D virtual carpets,” including the massive Adidas logo at midfield, and side-of-goal signage, are reserved for league partners only.

• Behind each goal line is an additional virtual billboard for club crests and partner branding alongside what would be a traditional in-stadium video board.

• Physical field-level LED boards and static signage features both league and club partners, as is typical for national broadcast matches.

• The catch for club partners is that the national sponsors pay for exclusivity in their specific categories: Teams can sign local deals with competing brands for home games and local telecasts, but can’t offer those brands inventory during the national telecasts. 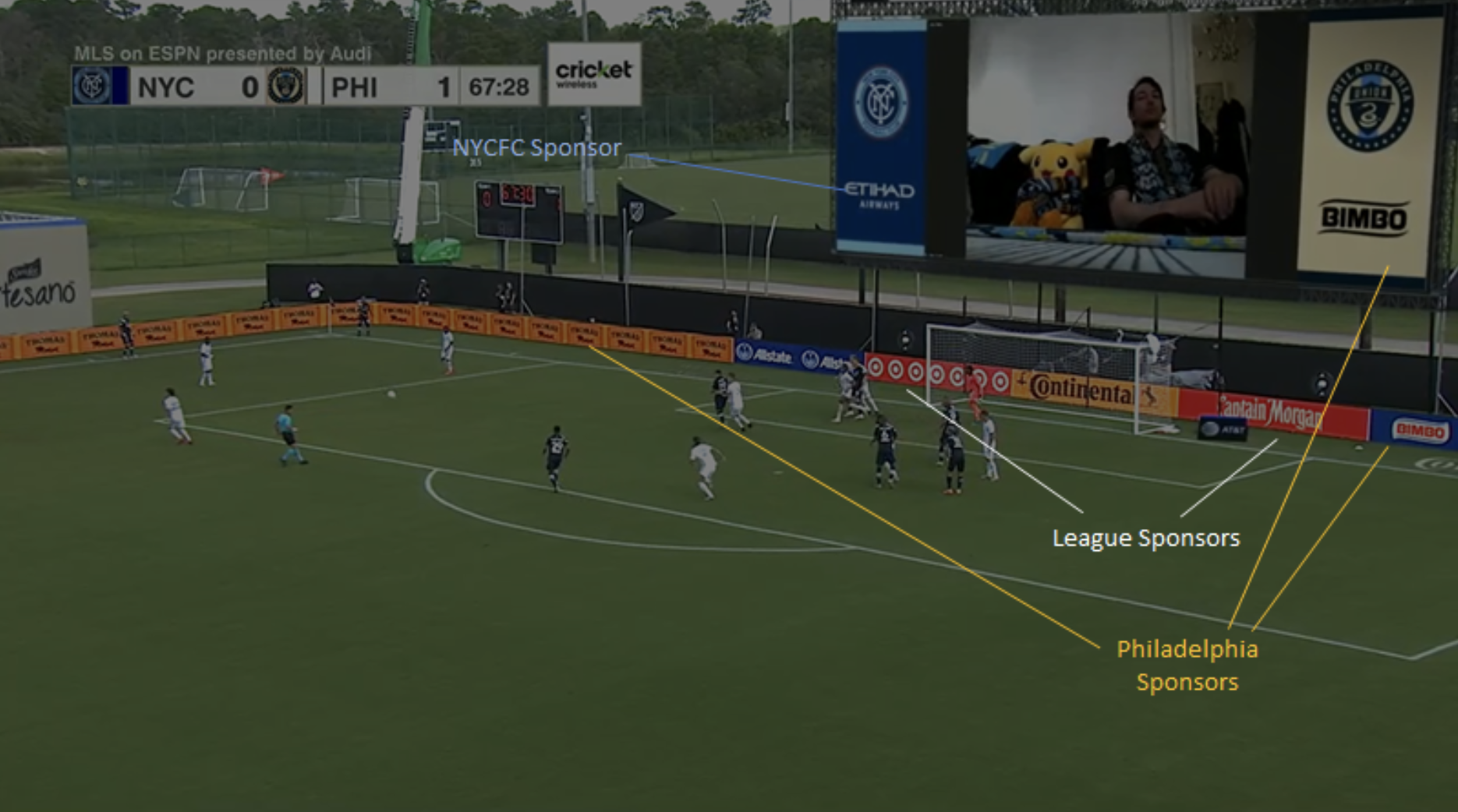 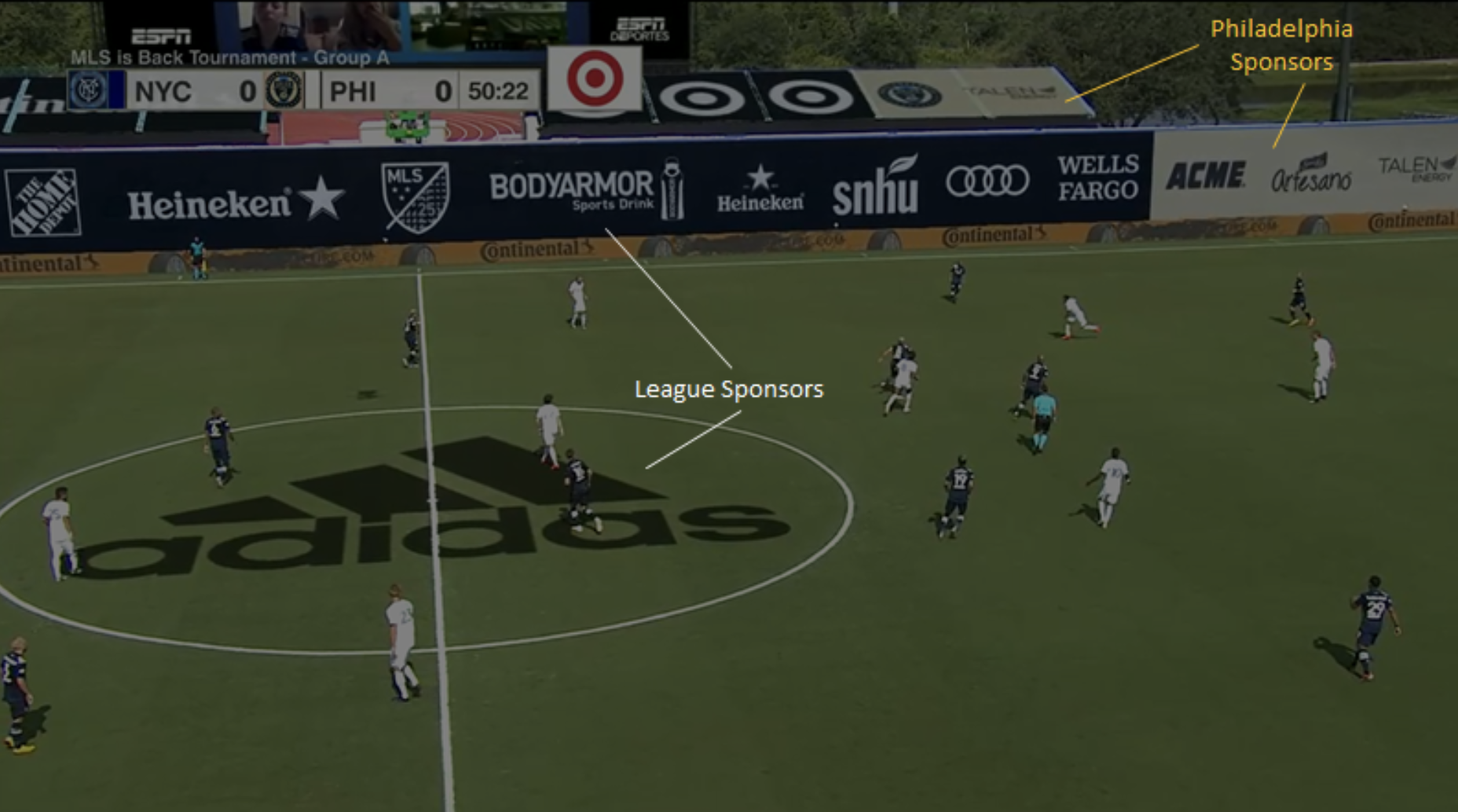 Drink up: Heineken and Captain Morgan, the league’s national sponsors in the beer and spirits categories, respectively, have received prominent placement both on rotating LED signage and virtually during the first few matches of the tournament.

• This might seem like a given based on their investments with the league, but two sources with direct knowledge of Disney’s operation of the Wide World of Sports Complex said the family-friendly corporation traditionally strictly prohibits any signage or event entitlements promoting alcohol products. They had been unsure whether an exception would be made for MLS (and the NBA). Disney declined to comment on the policy and whether it was waived for the professional leagues and their corporate sponsors.

Lay of the land: Thursday marked my first day on the ground at the ESPN World Wide of Sports complex, where I caught the inaugural 9 a.m. match between New York City FC and the Philadelphia Union — after navigating several layers of Disney security and an MLS temperature screening, that is.

• After parking and flagging down a friendly Disney staffer for walking directions, I headed through what felt like an active work zone dotted with folding plastic wayfinding signs for the NBA’s upcoming season restart. I’d envisioned the two leagues’ footprints at Disney being much farther apart and am interested to see what sort of barriers are put in place to separate basketball and soccer territory as the NBA’s July 30 tipoff approaches.

• There couldn’t have been more than 80 people — mostly players and ESPN crew, plus some MLS staff — gathered for the game at Field 18, where all of the morning matches will take place based on its position relative to the hot summer sun.

• The match lacked any of the pomp and circumstance that comes with fans in the stands, such as player introductions and goal announcements. Instead of fans cheering, the soundtrack included players shouting out instructions, calling for the ball and protesting to the officials. ESPN’s mics pick up quite a bit, but without commentary, those on site could make out full sentences called out on the pitch.

• While spaces like the media tent and player benches featured signage indicating maximum capacity, who is allowed in and whether face masks and social distancing are required, there were a few unmarked “in between” areas that create the potential for non-bubble individuals to get pretty close to players and staff living “in the bubble.” It’s a well-contained environment that clearly took a lot of thought and hard work to pull off, but as long as there are individuals on the grounds who aren’t contained to the bubble — this reporter included — nothing is foolproof.

After a chaotic start to the week that saw one team axed from the tournament and another put on notice, MLS leadership had to breathe a massive sigh of relief following the final whistle of last night’s opening match between Orlando City and Inter Miami. MLS will now look to make the most of the spotlight it finds itself under as the first men’s team sport to return amid the coronavirus pandemic.

#MLSisBlack: The game started with a powerful, minutes-long demonstration by the league’s Black Players for Change coalition with players raising fists with black gloves or taking a knee to silently protest racial injustice. (See photo above.)

• More: MLS fans are among the most likely to say teams and leagues have a responsibility to impact social and political issues.

Tennessee Blues: MLS Commissioner Don Garber said during a halftime interview that the league would consult with health officials later in the evening regarding Nashville SC’s participation in the tournament.

• With the number of players testing positive for COVID-19 reportedly up to nine, the expansion club seems likely to become the second team, after Dallas FC, to be forced out of the tournament.

• The good news: MLS has only reported one coronavirus case outside of Dallas and Nashville.

Logo Soup: How does MLS plan to make up for revenue lost this season to postponed matches and empty seats? Lots and lots of virtual advertising, it seems.

• MLS and ESPN hyped their planned use of ad technology leading up to the tournament, but the amount of branding visible on the screen at once was still jarring.

• A massive Adidas logo at midfield had the phrase “Adidas logo” trending nationally on Twitter, while the giant blue “green screen” installed along the camera-facing sideline displayed a wall of national and local sponsor logos too numerous to list here.

Bells and Whistles: Amy Rosenfeld, who is leading production of the event for ESPN, acknowledged this week that the network is investing “more than double” what it would for a traditional regular-season MLS telecast.

• As we reported last week, the high price tag had been a point of contention between ESPN, which is providing production services for the entire event, and fellow MLS broadcast partners Fox and Univision.

• The extra production outlay was evident during the opening telecast, which featured nonstop player audio captured by on-field microphones, including six installed in the playing surface itself, an AT&T-sponsored aerial cam streaming non-stop on ESPN3  and the aforementioned virtual advertising displays.

• Bacon: “We thought using the natural sounds of the game and the aggressive audio plan that ESPN put in place would allow for people to get closer to the game and provide a more authentic experience for the venue that we’re playing in.”

And what I’ll be watching for:

• This morning’s Group A matchup between New York City FC and the Philadelphia Union marks the first of seven 9 a.m. kickoffs on ESPN during the group stage, a scheduling decision made to avoid Central Florida’s midday heat. How will the early start time impact viewership and the players themselves?

• Local sponsors have been unable to capitalize on their investments during the pandemic. How will teams use the tournament to promote those partners?