Analysis: Contraction in Consumer Sentiment in July Signals a Rough Month for Businesses

A cordoned-off dine-in section at a Fatburger restaurant on July 1, 2020 in Inglewood, Calif., the day that California Gov. Gavin Newsom ordered indoor dining restaurants to close again in certain counties because of an increase in coronavirus cases. As many states are seeing an uptick in confirmed cases this month, Morning Consult's Index of Consumer Sentiment has seen a corresponding decline. (Mario Tama/Getty Images)
By John Leer

The increasing number of new confirmed COVID-19 cases and the fear and economic uncertainty associated with the virus appear to be weighing heavily on U.S. consumers. As of July 14, Morning Consult’s U.S. Index of Consumer Sentiment reads 86.85, 3 percent lower than it was on June 14.

The most likely cause for the recent downturn in consumer confidence is the increase in coronavirus cases. Separate polling by Morning Consult reveals that U.S. consumers grew less comfortable engaging in common leisure activities beginning in the middle of June, which corresponds to the most recent slowdown in the rise in consumer confidence. The slowdown turned into a contraction during the first two weeks of July, signaling that the nascent recovery in consumer spending has stalled. 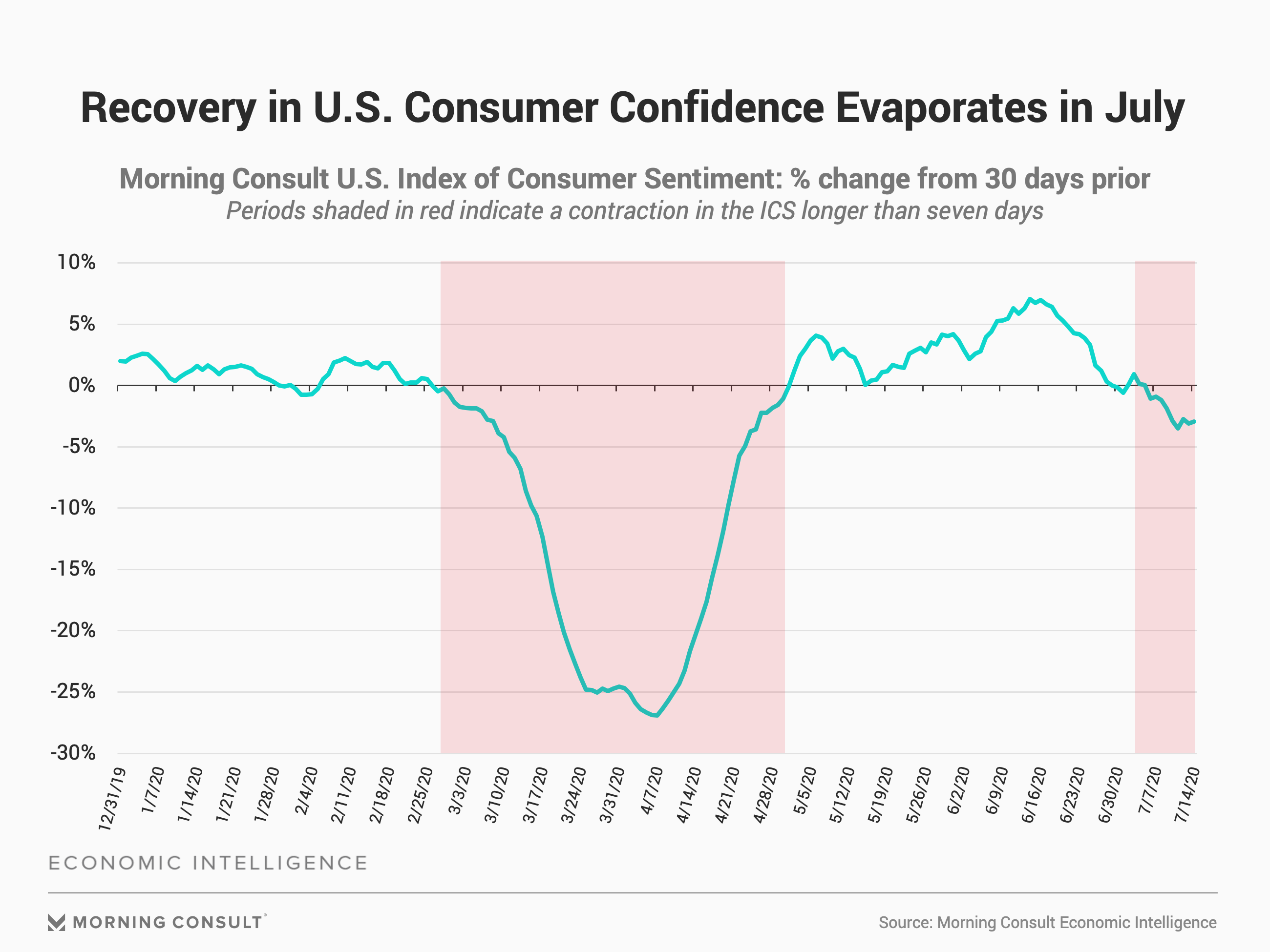 In the graph above, all values below zero percent reflect a decrease in consumer spending relative to 30 days prior. Sustained periods of negative values are associated with monthly percentage decreases in consumer spending and retail sales. In March and April, real personal consumption expenditures fell by 6.4 percent and 12.2 percent, respectively, according to government data. In May, real expenditures increased by 8.1 percent from the month prior.

The recent decrease in the ICS is particularly pronounced among consumers living in households making at least $100,000 per year. This group of Americans accounts for a disproportionate share of household spending and was largely responsible for the increase in spending in May and June. 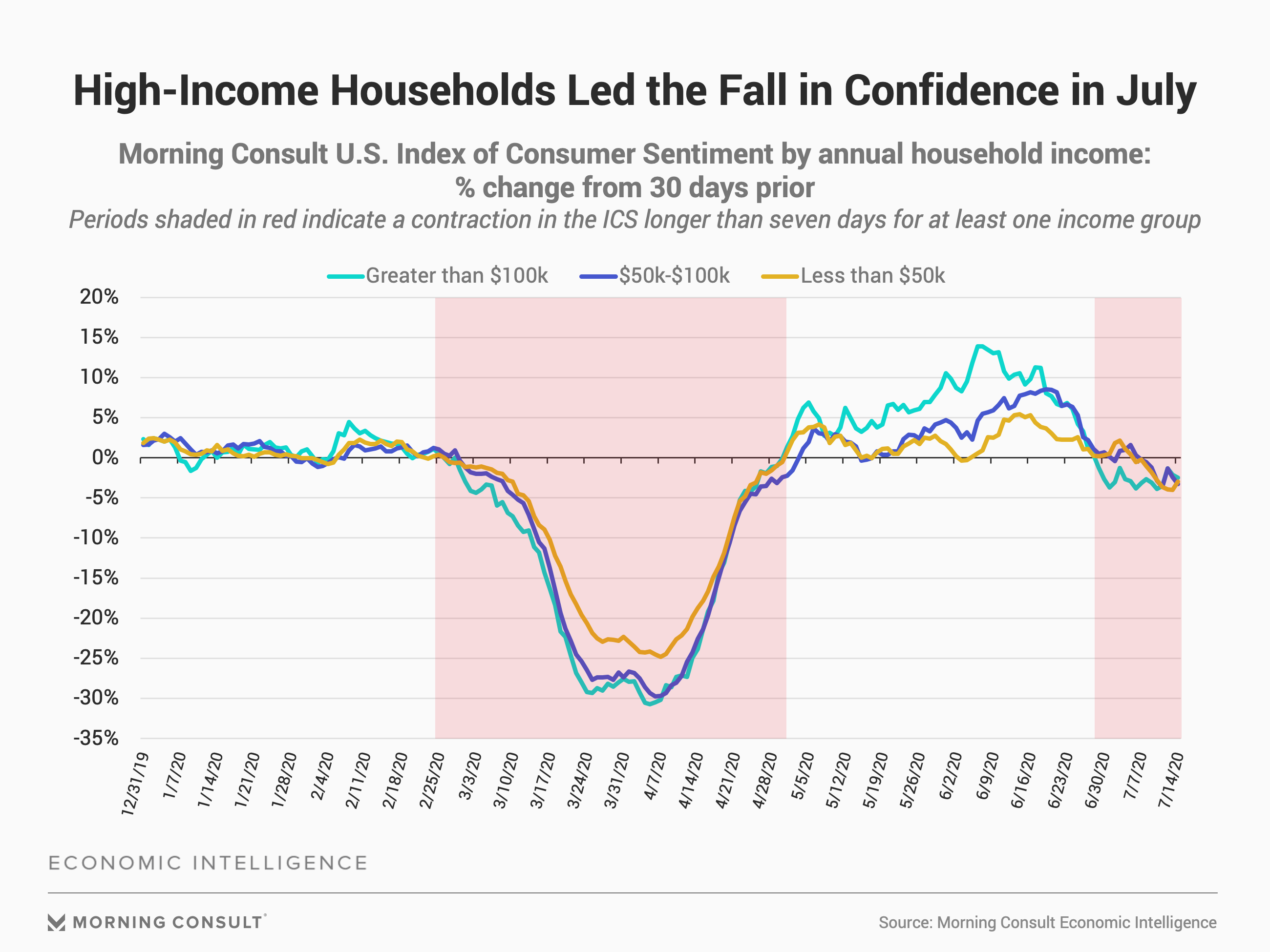 Thus, the income breakouts of the Morning Consult’s U.S. ICS paint an even more alarming picture than the aggregate value. If these trends continue for the remainder of July, monthly consumer spending and retail sales in July are likely to contract once again, albeit not nearly as dramatically as they did in March and April.

In light of these developments, businesses are likely to see total demand for consumer goods weakening through the remainder of July as well as a further reallocation of total spending away from premium goods and services and toward lower-cost products.

From a macroeconomic perspective, the current environment presents serious challenges for policymakers. Consumer spending accounts for such a large share of U.S. GDP that it remains to be seen how the U.S. economy can thrive without sustained increases in consumer sentiment, and containing the coronavirus and concerns thereof appear to be necessary preconditions for that to occur. Furthermore, the longer consumers remain unemployed and struggle to meet their financial needs, the more likely it is that the current recession morphs into something not easily remedied by an effective containment of the coronavirus.