Roger Stone, a longtime adviser and confidante to President Donald Trump, leaves the federal courthouse in Washington, D.C., on Feb. 20 after being sentenced to 40 months in prison for obstruction, lying to Congress and witness tampering, charges stemming from former special counsel Robert Mueller's investigation into Russian interference in the 2016 election. New polling shows most voters oppose the president's commutation of Stone's sentence. (Chip Somodevilla/Getty Images)
By Eli Yokley

Another 22 percent said the move was appropriate, driven by a 43 percent plurality of Republicans, according to the July 14-16 survey of 1,993 registered voters, which has a margin of error of 2 percentage points. 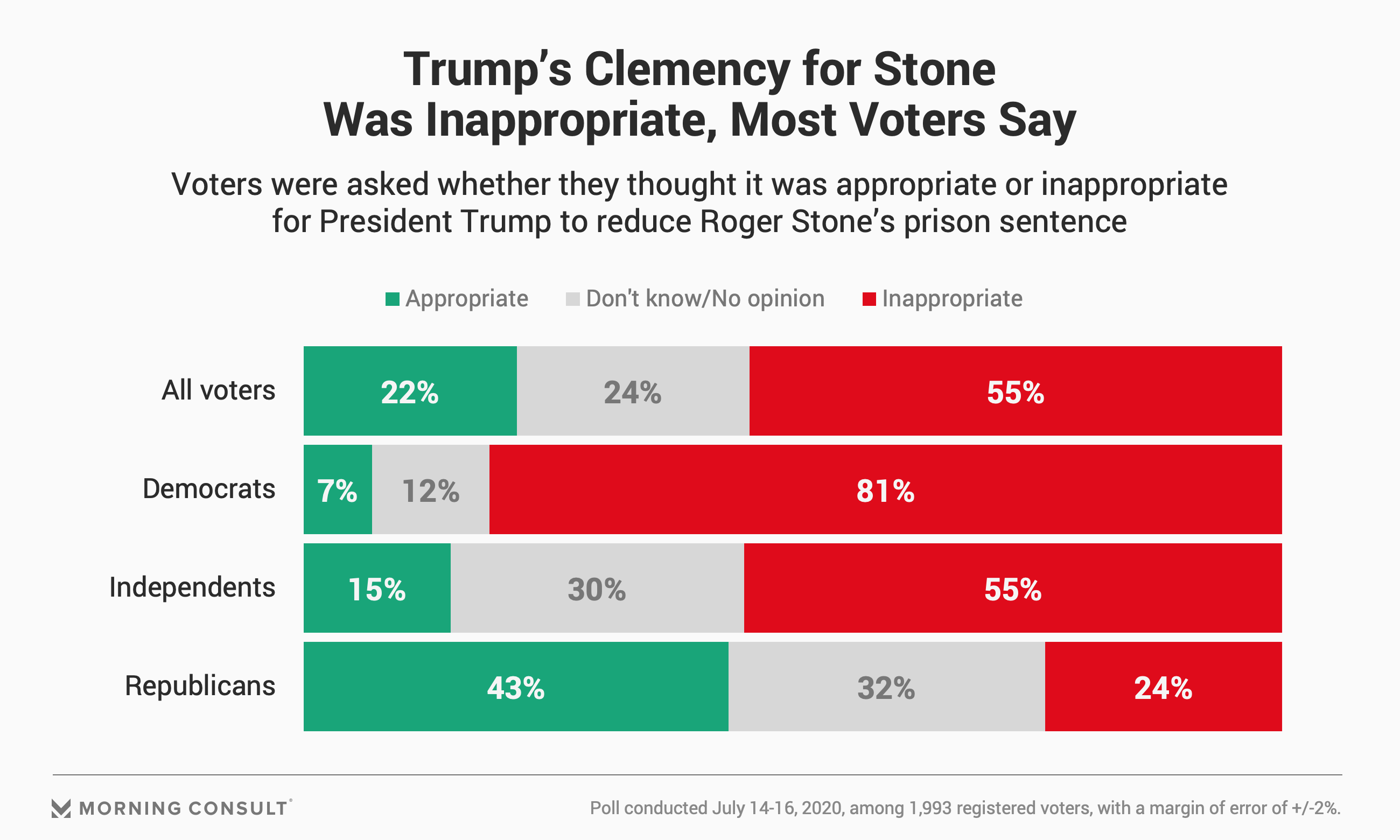 The commutation of the 40-month sentence — based on convictions of seven felony counts, including obstruction of Congress and intimidation of witnesses, which stemmed from government probes into Russian interference in the 2016 presidential election — was widely condemned by Democrats. It also drew rebukes from Republican Sens. Mitt Romney of Utah and Pat Toomey of Pennsylvania and prompted former special counsel Robert Mueller to defend his own investigation in a Washington Post op-ed.

Democratic voters were overwhelmingly against the move, with 81 percent calling it inappropriate, while 55 percent of independents said the same. A majority (56 percent) of suburban voters and 48 percent of rural voters also agreed.

Trump had hinted at an act of clemency for Stone, before and after Stone was sentenced in February. A Morning Consult poll conducted at the time found 53 percent of voters had said it would be inappropriate for Trump to pardon Stone.

A majority (62 percent) of Americans said they’d heard “a lot” or “some” about the commutation, though only 26 percent reported hearing “a lot.” That level of media saturation was a little more than the share who heard about calls to boycott Goya Foods Inc. over its CEO’s pro-Trump remarks, but far less than the share who heard about a record number of new coronavirus cases being reported in the United States at the end of June.

As is the case with many controversies involving the president, Democrats (35 percent) were more likely than Republicans (21 percent) to report hearing a lot about the Stone commutation.