2 in 3 Adults Ready to See Doctors for Non-COVID Treatment, but They’re More Split on Other Providers 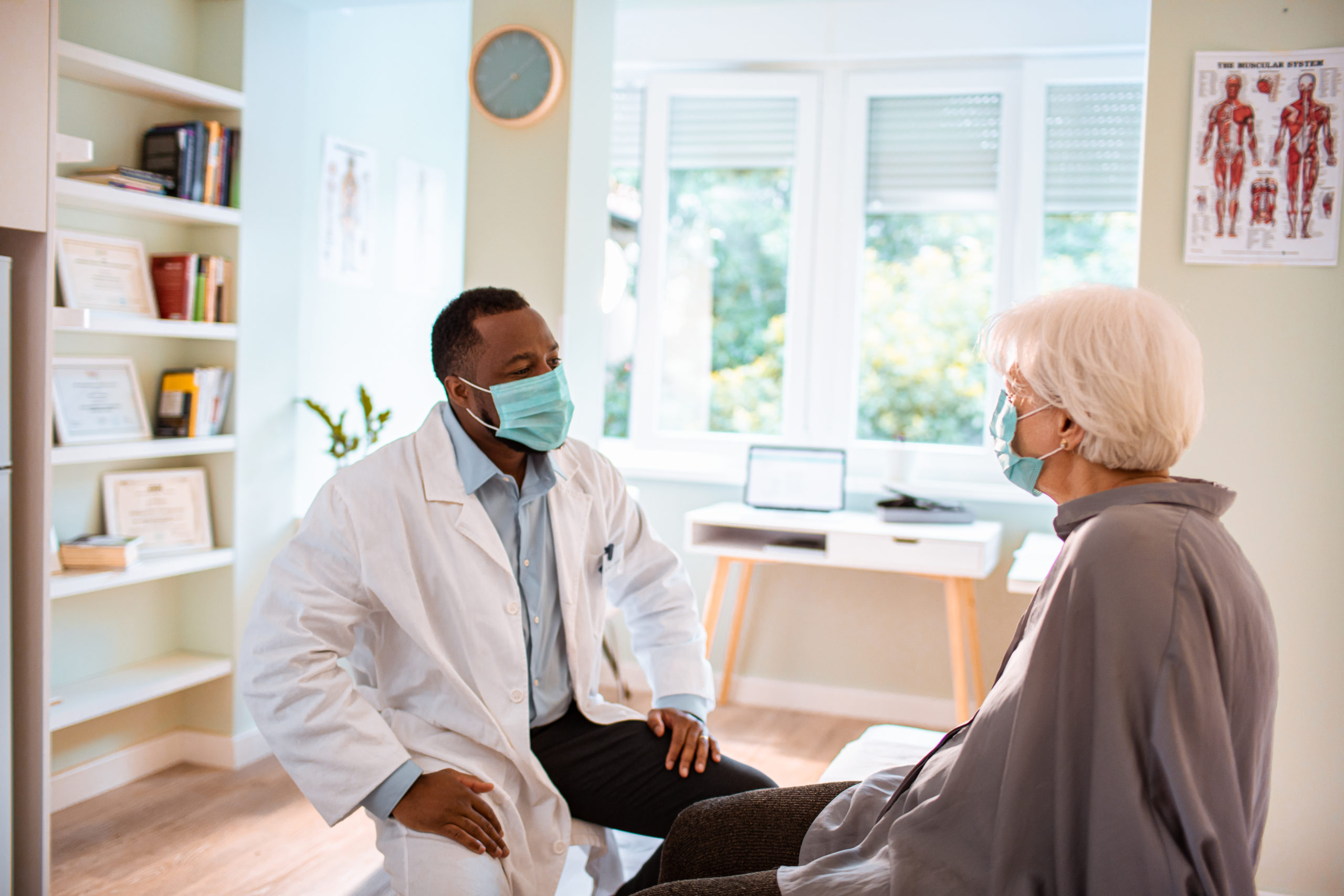 In a new Morning Consult poll, 65 percent of U.S. adults said they'd be likely now to to visit their primary doctor for appointments or treatments unrelated to the coronavirus, up 26 percentage points from an April survey. (Getty Images)
By Brian Yermal Jr.

The coronavirus pandemic has put severe financial strains on many businesses as a result of government-ordered closures, capacity restrictions and wariness among the public about personal safety — and provider settings are no exception. Despite the significant increase in medical care due to treatment for COVID-19, many hospitals and doctors were either mandated by elected officials to forgo elective procedures or did so out of an abundance of caution, resulting in large drops in revenue.

In late April, Morning Consult polling showed that people were generally unlikely to seek treatment that was unrelated to COVID-19 amid the pandemic. But now, a new survey finds that most patients are likely to see their primary doctors, and the public is also becoming more receptive to the idea of making appointments for other medical care. 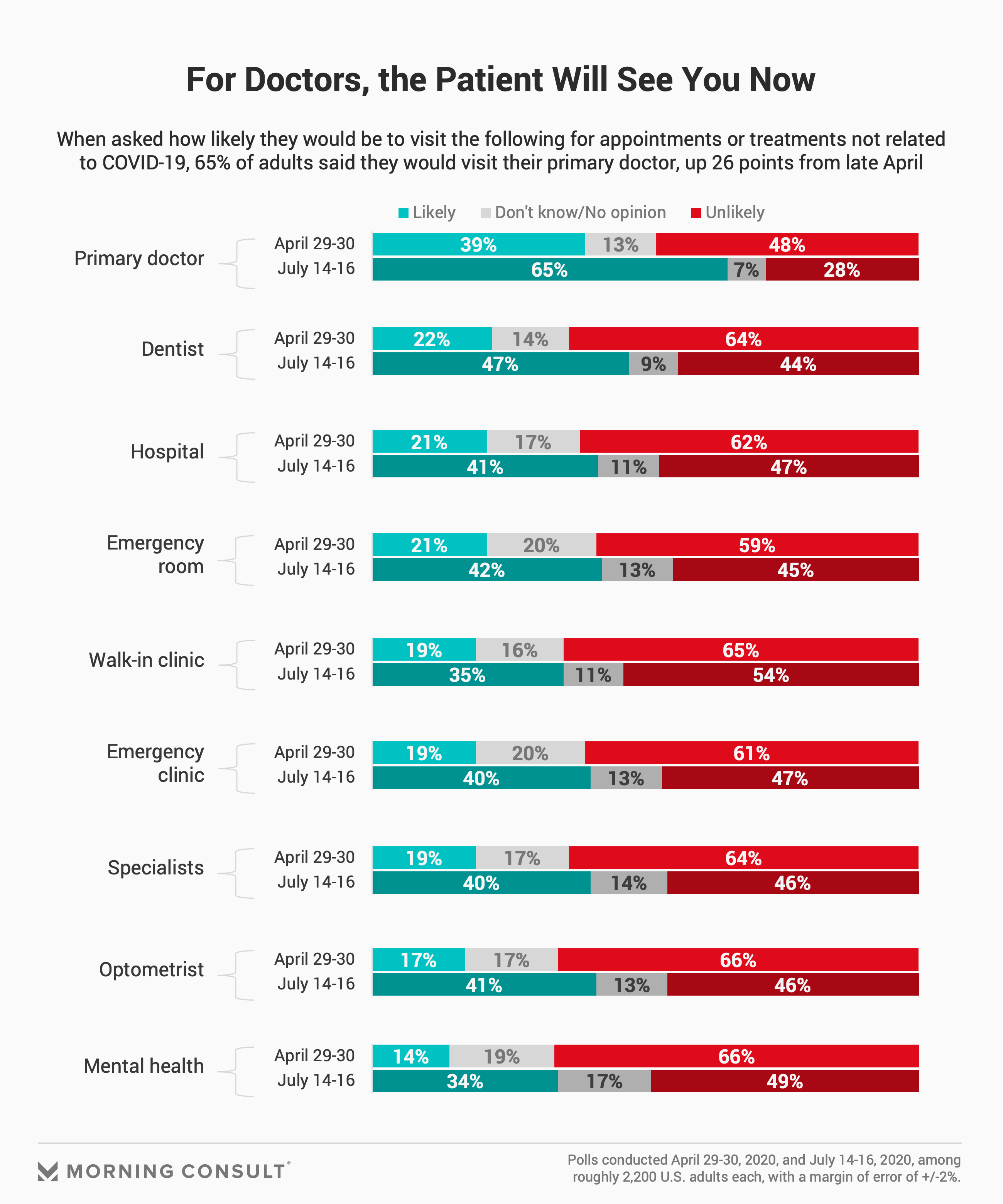 In the July 14-16 survey, 65 percent of U.S. adults said they are likely to visit their primary physician for appointments or treatments unrelated to COVID-19, an increase of 26 percentage points from an April 29-30 poll. Twenty-eight percent said they were unlikely to do so, down 20 points from late April.

Each poll was conducted among roughly 2,200 U.S. adults and has a 2-point margin of error.

While most people appear open to returning to their primary doctors, many are still on the fence about going to other providers: Out of the nine provider settings listed in the survey, only primary physicians broke over 50 percent likelihood among the respondents.

More than 2 in 5 adults in the recent survey said they would be likely to seek non-coronavirus treatment at hospitals, which in the first quarter of this year were subject to layoffs and bankruptcies due to large declines in elective health care. That number is 20 points higher than it was in late April, but less than the 47 percent plurality in the July poll who said they were unlikely to get treated at a hospital.

Respondents in the South and the West — where COVID-19 cases have been increasing drastically over the past few weeks and some hospitals’ intensive care units are reportedly near capacity — were slightly less likely than the public overall to say they would seek treatment unrelated to the coronavirus. Thirty-seven percent of those living in the South said they would visit a hospital, while half said they would not, and roughly equal shares of adults living in Western states said the same.

The provider setting with the second-highest likelihood of visitation for consumers was dentists, with adults split between being willing to go (47 percent) and unwilling to visit (44 percent). Mental health specialists were at the bottom of the list, with just under half of people saying they were unlikely to go to one compared to 34 percent who said they would, though the share of the public now likely to seek out such care has more than doubled since the April survey.

Although people are increasingly more likely to seek out all of these provider settings than they were in April, they’re still divided about when they’re comfortable with returning. Thirty-nine percent of adults said they would be comfortable visiting their primary doctor within the next month, the highest out of all the providers listed in the survey. For the other settings, respondents were generally split, with roughly equal shares between 20 and 30 percent saying they were comfortable going either in the next month or more than six months from now.