Analysis: A Drop in Consumer Confidence During the Pandemic Isn’t a Partisan Issue

Republicans are more likely to express confidence in the economy, but confidence among independents, Democrats and Republicans alike is well below pre-pandemic levels, writes Morning Consult’s John Leer

A host at Ocean 10 restaurant in Miami Beach, Fla., stands at the entrance of the restaurant on July 18 to turn customers away before a curfew goes into effect at 8 p.m. Miami Beach reimposed the curfew after coronavirus cases rose after the reopening of businesses. (Joe Raedle/Getty Images)
By John Leer

In addition to the economic outlook described in detail last week, recent negative developments in Morning Consult’s Index of Consumer Sentiment also provide insight into the 2020 presidential election. Low levels and decreasing trends in consumer confidence tend to be associated with the incumbent’s party losing the election.

One caveat is that presidential elections only occur once every four years so the sample size of elections is fairly small. Also, consumer confidence data reflects surveys of all adults over the age of 18, not just registered voters or likely voters, who are the ones who influence elections. Differences in voter participation rates across parties can and often do drive election outcomes.

Nonetheless, for all of those who believe that elections are about economics, Morning Consult’s consumer confidence data provides a clear picture of how American adults view the economy and how those views have changed over time. It also tracks consumer confidence by people’s political leanings, which is particularly useful given the outsized role that independent voters have played in recent elections.

Consumer confidence among Democrats, independents and Republicans fell significantly with the onset of the coronavirus pandemic and remains below its pre-pandemic levels. 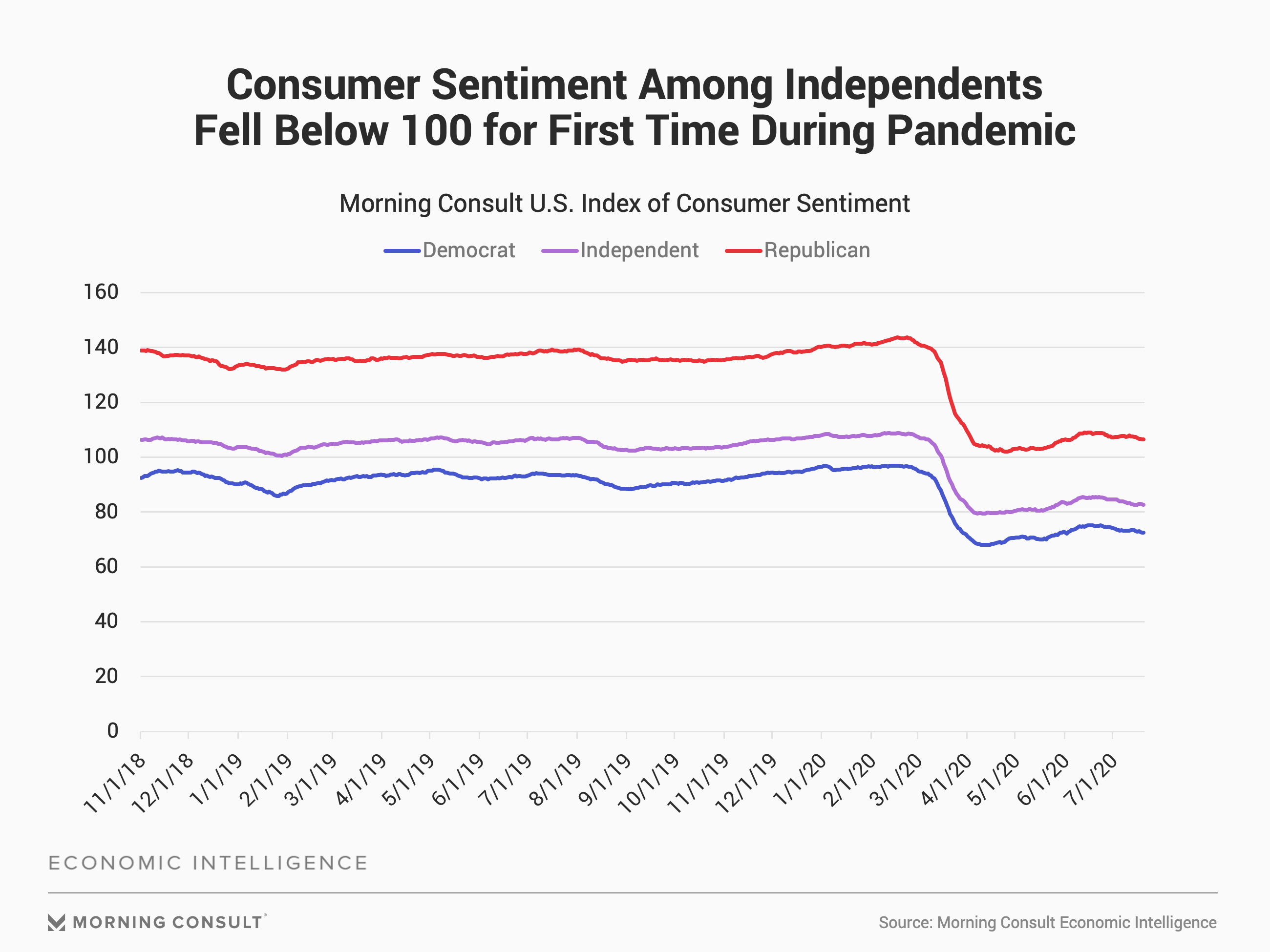 As one might expect, Republicans continue to exhibit a significantly higher level of confidence than Democrats and independents. However, what is unique in this data is that confidence among independents currently falls well below 100, meaning that a greater share of independents expressed a pessimistic view of the economy than an optimistic one. Some studies have shown confidence below 100 to be a good predictor of voting against the incumbent’s party. This development does not bode well for President Donald Trump to the extent that independent voters are key to his re-election.

The data also shows how similarly consumer confidence has evolved across party lines during the pandemic. As of April 6, consumer confidence among Democrats was down by 27 percent, independents by 25.3 percent and Republicans by 25.3 percent relative to 30 days prior. The rebound in April and May and the most recent fall starting in mid-June have also been fairly similar across political affiliations.

The similarities across the political spectrum indicate that the economic impact of the pandemic remains essentially apolitical, unlike the issues of wearing masks and reopening schools.

The graph below also shows that political affiliations can be an important differentiator in terms of economic outlook, as was the case in December 2018 and January 2019 with the government shutdown and August 2019 with the trade war with China. 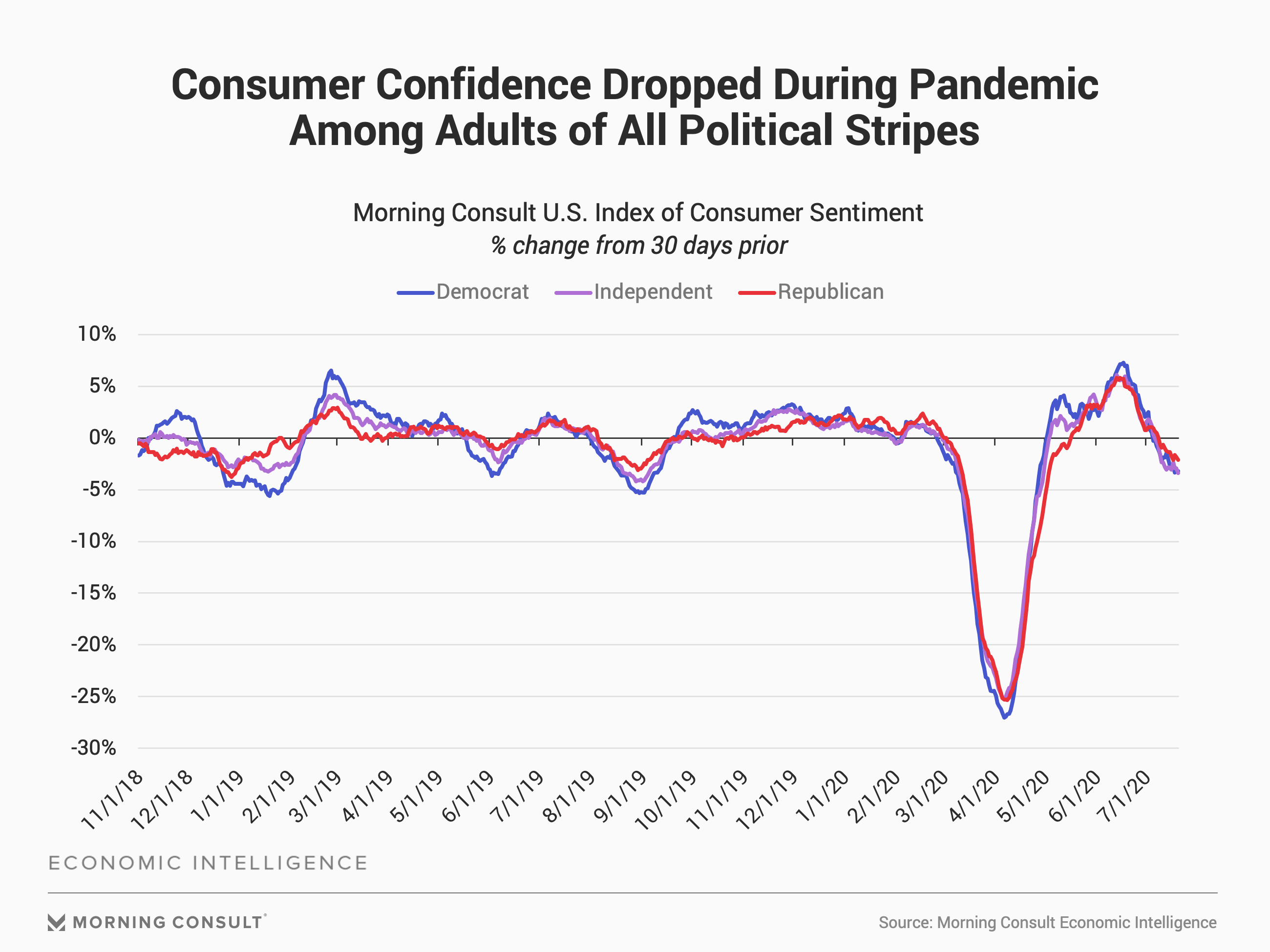 Confidence across the political spectrum increased when the number of daily coronavirus cases decreased; unemployment benefits and fiscal stimulus boosted disposable income; and restrictions on economic activities were eased. Thus, the question for Trump and the Republicans is whether they can achieve all three of these objectives prior to the election.

The political outlook over the next few months has dramatic implications for many businesses and for the economy more generally. While the election is unlikely to significantly influence the path of monetary policy or even the near-term path of trade policy, Trump and former Vice President Joe Biden offer different visions in terms of fiscal, regulatory, immigration and labor policies, and these differences matter as businesses assess their operating environments. Thus, the politics of economics will be front and center through election day.